We’re all about ice

Finally, we are enjoying a solid shot of solid ice throughout the Northeast. Once temperatures dropped, some magic wand cleared people’s calendars so we could get out ice fishing, sailing, skating and plain old winter relaxing, from South County to North Smithfield to the Great State of Maine.  We’re all about ice this week and that’s well overdue. 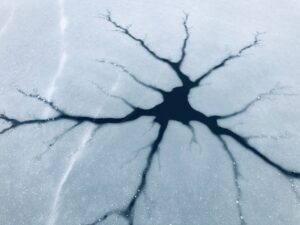 Starting in South Kingstown, Rhode Island, Asa Pond in Wakefield had a few inches of ice on the western side and not so much to the east. That didn’t stop a few people from sailing around for an hour on skates, letting a light wind do the heavy lifting in their colorful sails. A few girls on classic white figure skates wisely made circles in the shallow area. Over on Worden Pond, only her insides were hard enough to support fishermen and women. A bit of ice from earlier in the week was blown to the south, making it lumpy and hard to manage but a few hardy anglers did set up a shelter to fish the eastern banks. Worden, the state’s largest natural freshwater pond at 1043 acres, has a strong population of Northern pike who will hold in the pond’s tall grasses to rest and hunt. Sending down a jumbo shiner will draw strikes from perch and bass but man, when a toothy pike takes the bait and doesn’t care for that sharp point, it’s an epic battle with a tip up and a long length of line. 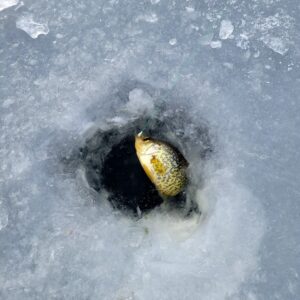 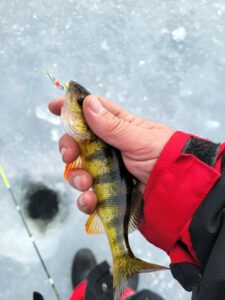 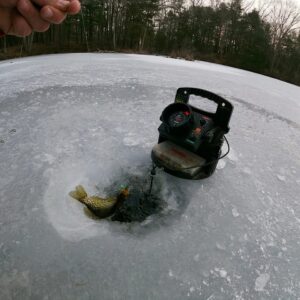 Just to the north, Randy Degrace was out there, catching a load of yellow panfish. Randy can haul a thirty pound striper into his kayak then be just as happy to set up his fathometer and jig up a few yellow perch and crappies. Randy is the man and joy is universal.

One fun thing about ice fishing is the gear. You don’t need much. Come summertime, if you want in on the striper bite around Block Island or Brenton Reef, you need a boat. If you want to chase tuna, you really need a boat and some serious support. Even to surf cast for bass or blues on a sweet summer night, you need waders, surf rod and reel, hip pack, needlefish, headlamp and enough patience to deal with people who think you’re on their beach. Want to catch a few largemouth or some gorgeous crappies on a Sunday afternoon in January while the kids slide around for a few hours having the time of their lives? You really just need a few tip ups or basic jigging rods, some shiners and two buckets. One holds bait, gear and snacks and one supports your backside if the bite goes slow. Pretty simple good fun and even better if cold air saps cell phone batteries and we have to actually enjoy being somewhere without Apple support. Having a balloon fly off or hearing a 130 whine behind a Viking trolling spreader bars is amazing and heart stopping but so is the sight of a teeny tiny orange flag 75 yards across the ice. Suddenly those old fish stories come to a quick halt and old men with bad knees go running and sliding and cheering and pointing at a little flag. 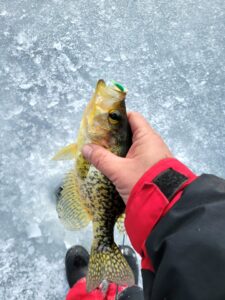 A half pound green, gold and black crappie will be the talk of the town as a few ibuprofen ease knees later that night. Don’t tell me there’s no such thing as magic. 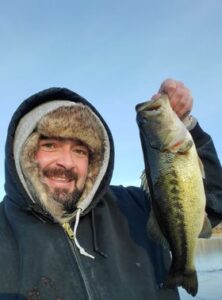 The actual Ian Nason with an actual largemouth bass

He’s out there in Carhartt’s, furry hat, sweatshirt and jacket absolutely killing it catching largemouth bass. It’s bone chilling cold and he’s all ear to ear smiles. Could the man look any happier? Cheers Ian. 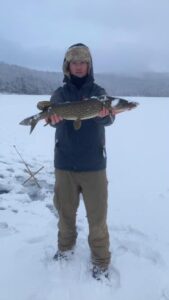 Then Shane Hanahan blows everything up with a great big northern caught through ice and snow. Again, no crazy expensive gear or clothes, just determination to get out and get after it. These guys hoist fish like true trophies because they are rewards for leaving warm living rooms and hanging with friends on frozen ponds.

Up in Maine, where most ponds were frozen over by August, members of a social media group, Maine Ice Fishing, have been on the hard for weeks, landing fish of all sizes and species.

Chase Lapointe was on China Lake outside of Vassalboro and found the big largemouth everyone was chasing. 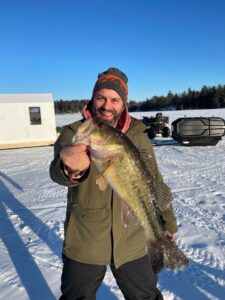 Glenn Carlson looking happier than any man on the ice

Glenn Carlson was on Pattee Pond in Winslow, with a truckload of gear in tow, and pulled out more largemouth as big as your head. And it’s seriously cold up there. 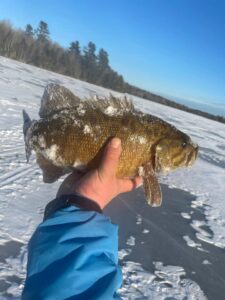 Then Nick Hebert set up the prettiest Eskimo shelter on some flat and perfect ice that seemed to stretch out forever. He may have just sat there for a hour before drilling a first hole. It was that pretty.

Peace on a frozen pond in the midst of a crazy world. All these guys, they stopped the distractions to find ice and fish and laughs and then posed for pictures of their trophies. 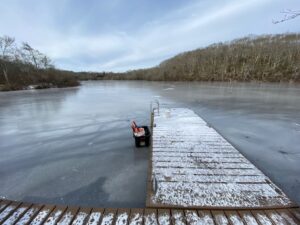 Peace on a winter wash pond

Quick question, when you visit the shoreline, be it fresh or saltwater, what’s your priority? Chances are you want to park your vehicle, then fish, swim, paddle, explore or maybe just lean back with a cold one and practice some kayak lethargy and that’s all good. The...
Keep Reading

Since getting off the couch was tricky on a recent holiday celebrating thankfulness and stuffing, it afforded me time to think. And thank. First of all, I’m thankful that I’m still here. Given my propensity for the occasional hoppy beverage and checking the “exercise”...
Keep Reading