We’re talking trees, trout, guides, flies and film because it’s winter and we have big news about the American Saltwater Guides Association, Trout Unlimited and a much-needed fly fishing movie tour. And, we are way more fun than reading your holiday credit card statements. 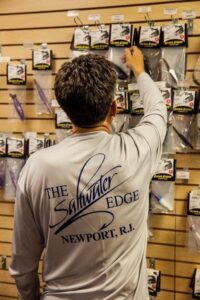 Peter Jenkins making sure everything is abundant

Peter Jenkins owns, manages, stocks and sweeps the floor at Middletown’s The Saltwater Edge. He’s s also Board Chair for the American Saltwater Guides Association. His shop ran a December promotion where one percent of sales were donated to the Association. A busy holiday shopping month provided ample foot and internet traffic with lots of awareness raised for this new conservation organization. Now Peter has announced a donation of $1580. The ASGA states, “We are a coalition of forward-thinking guides, small business owners and like-minded anglers who understand the value of keeping fish in the water. We realize that abundance equals opportunity, and that such opportunity is quite a bit more important to the future of fishing than low size limits and full coolers.” If you know Peter or follow their President, Captain John McMurray of One More Cast Charters in New York, then you will understand how simply effective their mission is: Keep fish in the water. Build abundance. Build business. Build hopes for big days on the water and around the dock telling fish stories because all that comes from abundance.

This is a forward thinking group for sure. If you are interested in being a member, they say, “Members of the American Saltwater Guides Association include guides, fishing-related small businesses, and conservation-minded private anglers who find greater value in having access to abundant fish stocks rather than simply maximizing harvest.” Who doesn’t want abundance, good fishing and strong advocates who can actually see how futures can fail or be managed properly? www. saltwaterguidesassociation.com.

The Fly Fishing Film Tour, or F3 to the cooler casters, is set to return. They have a host of new films set in some pretty tropical locations of course. So far, the two closest showing are in Maine and Massachusetts. If you’re not into fly casting, please don’t let that keep you from taking in a night of beautiful films about searching for fish in local and exotic locations. Check out the stoke reel:

On February 24, you can see the show at the Oxbow Blending and Bottling Company in Portland, Maine. I wouldn’t skip any chance to visit Portland, even in their coldest month. The Old Port is alive with restaurants, galleries, beer joints, artisan shops and brewpubs. The Blending and Bottling room houses their fermenting sour ales with a tap room which is open for a variety of events, from hip hop nights to fly tying classes. What’s not to love there? Oxbow has an impressive back story with a pretty farmhouse brewery situation a bit north in Newcastle. Watching snow fall on Casco Bay, maybe with an ale in your hand, or maybe not, will make for a really fine mini vacation. 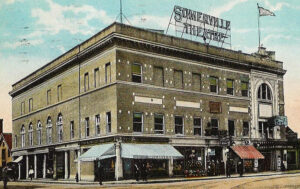 On February 26, you can get a second saltwater fix at the absolutely gorgeous Somerville Theatre in Cambridge, Ma. This room is one of the finest vintage halls in New England. Opened in 1914, it remains a classic showcase of the arts with dancing, live bands, movies and film festivals. These people know how to throw a show and have long earned a reputation for really good popcorn. Not too bad for February.

Some Rhode Island shows will be hosted, we hope, since travelling more than ten miles through The Ocean State seems to be something requiring spare gas cans and a sea bag of “what-if’s.” Popcorn or not, beverage or not, being in a room full of anglers parched for seawater, cheering and howling their way through a dozen or so films of people doing what we love in places we wish we were, is worth a few bucks at the door. Stay tuned, we’ll keep the dates coming. 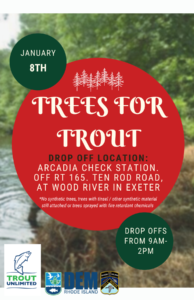 Since we’re taking trees, trout, guides, flies & film, the fifth annual Trees for Trout day, sponsored by RI’s own Trout Unlimited Chapter 25, was another major success. 198 Christmas trees were brought to Arcadia Management Area last Saturday to help with their conifer revetment program. Those trees will season for a few months, then über outdoorsman RIDEM Biologist Corey Pelletier will lead his team to deploy them along several rivers to stabilize banks, slow stream speeds, develop critical habitat or even increase speed in some places to move out sediments and expose smooth gravel bottoms so trout can build redds next fall. 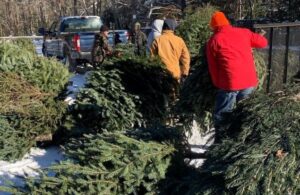 If you missed this event and plan on decorating a Christmas tree next year, here’s the lowdown on the pickup. You have a several options. One is to huck it in the backyard, if you are so fortunate, and let small game hold up there for a few months of snowstorms. Then it’s just kindling for an unplanned fire. You can kick it to the curb and hope that the rusty garbage truck leaking hydraulic fluid and offensive shiny liquids down your street separates it to be composted. Right. You can bring it to a local transfer station which may have a free drop off container, or drive to Johnston and bring it to the recycling center, which really is pretty cool. Your best option is to make a morning out of a trip to Exeter, meet some TU volunteers, let Corey Pelletier huck it into his state truck, know you did the right thing, then give in and spring for breakfast for the family. We could all use a little resiliency in our lives and since trout are largely at the mercy of failing water qualities, ancient and unnecessary dams, high pressure stocking rotations and ever encroaching houses with septic tanks and demands for ground water, driving to Arcadia sure sounds like a fine donation.

Joe Zottoli told me to be at the dock for exactly 8:50 a.m. It was very clear that details were important, like being on time. He’s studying Biological Oceanography at URI’s Graduate School of Oceanography, runs the deck of their 53’ workhorse research vessel, the...
Keep Reading

Greg Vespe, experienced fisherman, talented boat handler, patient teacher and solid human, will lead the RI Saltwater Anglers Association as its new President. His skills on the water and background participating in the fisheries management process make Mr. Vespe the perfect choice to represent some 7500 members and affiliated groups.