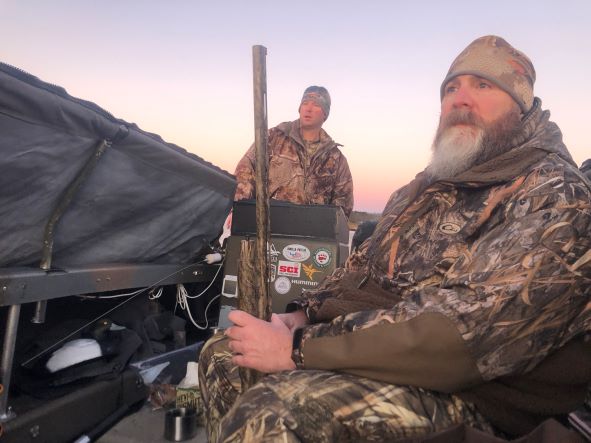 Shooting and missing many ducks. Hunting is never easy, in winter, when you can’t stop laughing 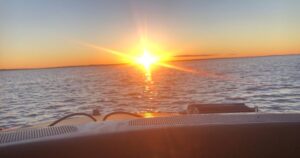 “One thing I know about hunting is that I’m not good,” Ralph Craft said. Undeterred, he unpacked camouflaged gear in a Warwick parking lot as Captain Jarad Luchka of Big Game Waterfowl Duck Hunting Charters walked over, two hours before false dawn. Rhode Island duck season was in full swing and they were anxious to set decoys before any early hints of daylight and shoot a limit. Spoiler alert: very few ducks were harmed in the writing of this story, Shooting and Missing Many Ducks. 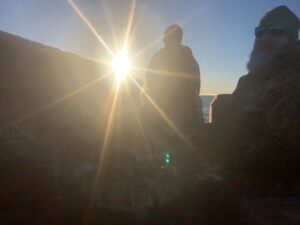 Bright and sunny on a new day

Settling into the port side of Jarad’s 21’ TDB Sea Class duck boat, we steamed south across a kindly Narragansett Bay. It was seasonably cold with a noontime forecast giving falling temperatures and small craft warnings which was precisely what we were riding in. It takes a serious hunger, grit, passion, deep commitment, some old world bravery even, to hunt ducks in winter, near ice, in winds, in a small craft. Winter hunting is no place for the meek.

“Anyone care for a scone?” Ralph asked. Even in the harshest conditions, man needs sustenance, be it blueberry or raspberry. With no disrespect to Mrs. Craft, the blueberry scones were a tad sweeter. With decoys deployed in a trusted pattern resembling some enviably sized male anatomy, Jarad deftly swung his 115 horsepower motor to bring us tight to a shoreline braced with crumbling block stone walls. He started hunting more than 15 years ago and with a smile, easily admits, “It was all downhill from there.” He has built a solid business putting sports on birds, letting clients have their space while keeping everyone safe. He is a smart, agile shooter and a happy instructor who reluctantly cops to “a six scones a day diet,” during high season. Jarad’s guided trips are fairly priced and worth every cent and cold trigger finger. That’s the truth.

“I think the tide is all wrong,” Ralph observed wistfully. Ralph is Jarad’s friend, occasional Big Game Waterfowl sport and complete character. His size is daunting, his word choice arresting, his generosity overwhelming. Sipping coffee while brushing aside crumbs from his camo coat, Ralph loaded a 12 gauge shotgun with bismuth shot before contemplating physical, emotional and financial costs of hunting, which is a terrible idea.  Almost on que from a first spartan wash of daylight, five brants fired in to check out the spread. On Jarad’s signal, Ralph fired back. Several times. Swinging to my right, I unloaded both barrels. The ducks flew up river safely as Jarad shook his head. “The sun was in my eyes the whole time,” Ralph explained, facing west.

Temperatures increased incrementally with frustrations as lines of birds visited and continued on without injury. Two raced in, quickly within range. Swiftly I dropped one although success came without proof. “I swear I hit him. I know I did,” I protested to two blank stares. Our ever-courteous guide remained silent while shaking his head in the negative. “No, you didn’t,” Ralph said, waving a large tug of a store bought pastry towards the Bay. “See? Nothing there,” he said. Democracy rules, which often is a down side to democracy. A wad of jelly fell to Jarad’s heated deck. Proud of our place as sportsmen in a tremulous global order, we toasted practicing more conservation than hunting with laughter. 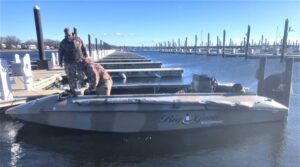 Forty minutes after sunrise, the first takedown gave us hope. Six birds moved in. Ralph rose, leveled and unloaded. I added two from the bow. Jarad finally closed the deal with one round as a single duck fell. “I think that one died of a heart attack,” he lamented. You need thick jackets and thick skin to hunt with these two. “That was a nine round bird,” Ralph observed.

Shooting and missing many ducks was the day’s theme

“It’s a bad luck choke,” Ralph said. Jarad had suggested Ralph change chokes to tighten his pattern and odds. When a bird came straight for the camo canvas, he shot and missed. “It’s so not the choke,” I said quite silently. For several hours, shooting was swift, hitting less so. Ralph unleashed in the general vicinity of a flock. “This bismuth shot is awesome,” he said. “Apparently not,” Jarad offered. That’s how the morning rolled.

Another single raced through right to left. Ralph swung and fired three times. He was very close. I went blank. Dick Cheney appeared in my eyelids. Everything echoed. “I think you just concussed my beard,” I yelled, rubbing a sore ear and a gray chin then suggested he trade his firearm for binoculars. Back at the helm, watching waves of ducks glide up river, all comfortably out of range, Jarad said, “They’re onto us, I think.” “What?” I yelled. With scone rations depleted and old man knees sore from rising, shooting and missing many ducks, it was time. 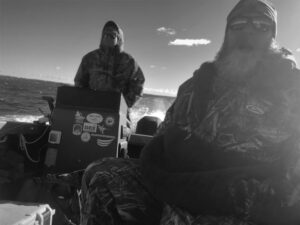 By 9am, we had put seven birds on the deck. Ralph held one up, proud as could be. “That’s a $50 duck,” Jarad said. By high noon, there were a dozen birds in the boat and our stomachs ached from laughing. As we took a small craft beating running north, Ralph began calculating his duck to shell price. Such ratios are likely dispiriting, save for those who peddle ammunition and he quickly gave up. Thanks to Jarad Luchka’s experience and love of water, we had a solid day hunting from a perfect boat with an ace guide in a trusted hideaway where a hundred ducks flew in and we allowed almost all to fly out again. Conservation over hunting indeed. 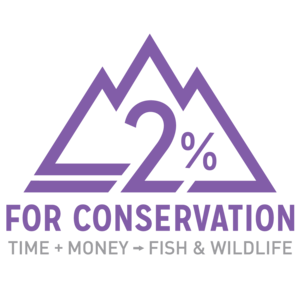