Time and tide wait for, wait for it… 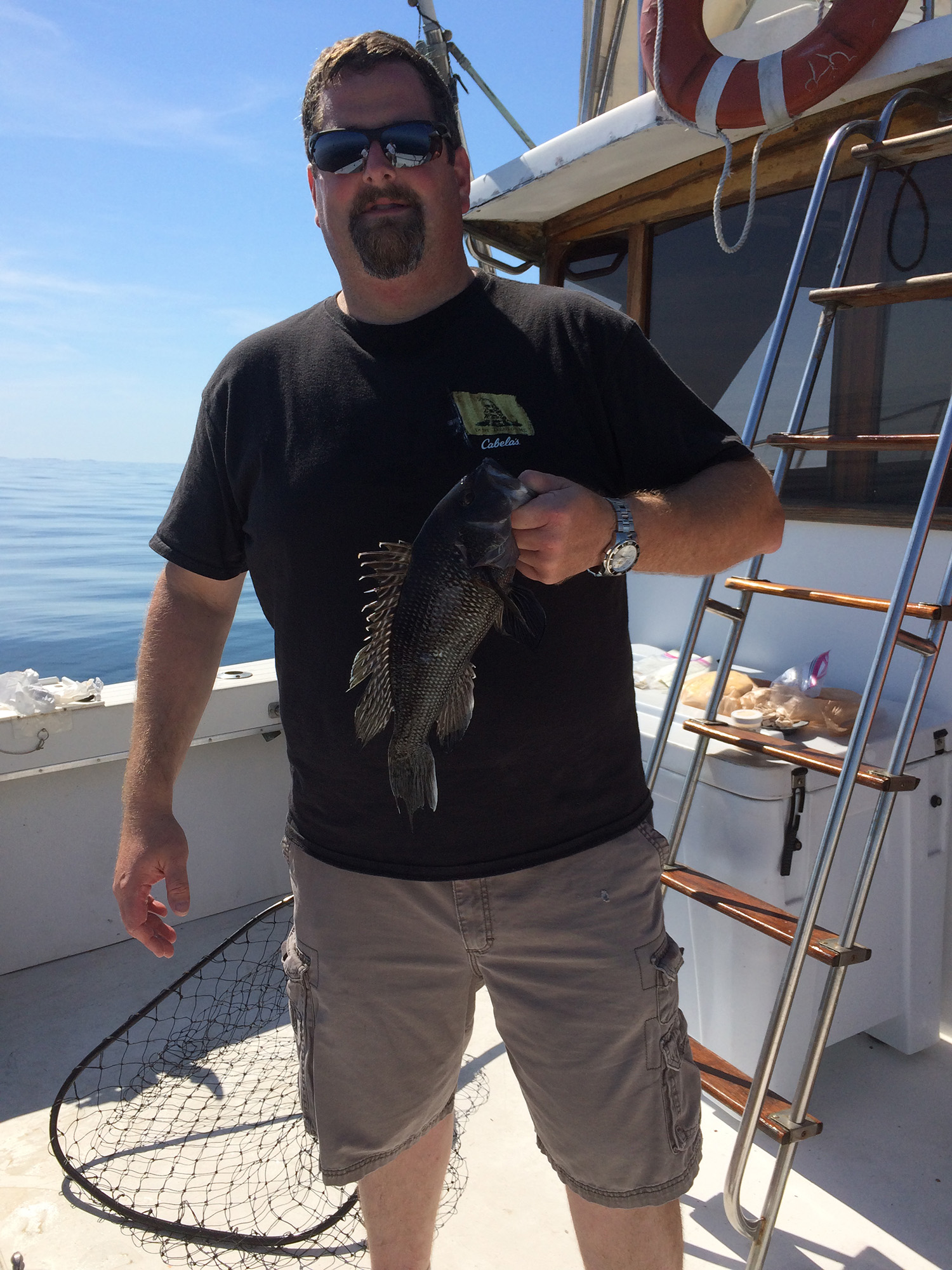 Four new friends on a “Here We Go Again” charter trip steamed out of Jerusalem in a fine 42’ Jersey. Winners they were of a RI Saltwater Anglers Association raffle, except for me, who got the call since someone called in sick. We had a clear skies and seas to jig for fluke, black sea bass, scup and maybe some screaming fast albies. A few hours on the water can be a powerful eraser of to-do lists or never-ending ring tones and often they pass too quickly.

10:45am. Squeeze my truck between two visiting sedans who left room enough for a small pony. Shoulder season grows broader every year. Bob Plant and I get to know each other waiting for the rest to show. We chat about work or the rigors of retirement. Lots of feet shuffling.

11:00 Still waiting for the rest of the charter crew. And the captain. Cell phone call alerts us that we’re on the wrong dock. It happens.

11:25 Waiting for mate to return with smelts. And cigarettes. Lots of hands in pockets, talk of fish and regulations. Tide is running out.

11:31 The mate, Nick, appears, almost invisible in all that camouflage. Right away we know this cat can fish. In the salon, Captain Al Passarelli offers opening instructions: “I know you guys all know but just in case, we all wear life jackets and form a circle in the water. I’m the last guy to leave the boat.” I envision us clinging together, floating past the east gap, wondering why I never packed that emergency beer. The 16 ounce one.

11:34 Twin 671’s fire up, rods are stowed, lines are tossed. Steam past whole tan bellies and clam cakes perched along the short wall. Full ahead one mile. 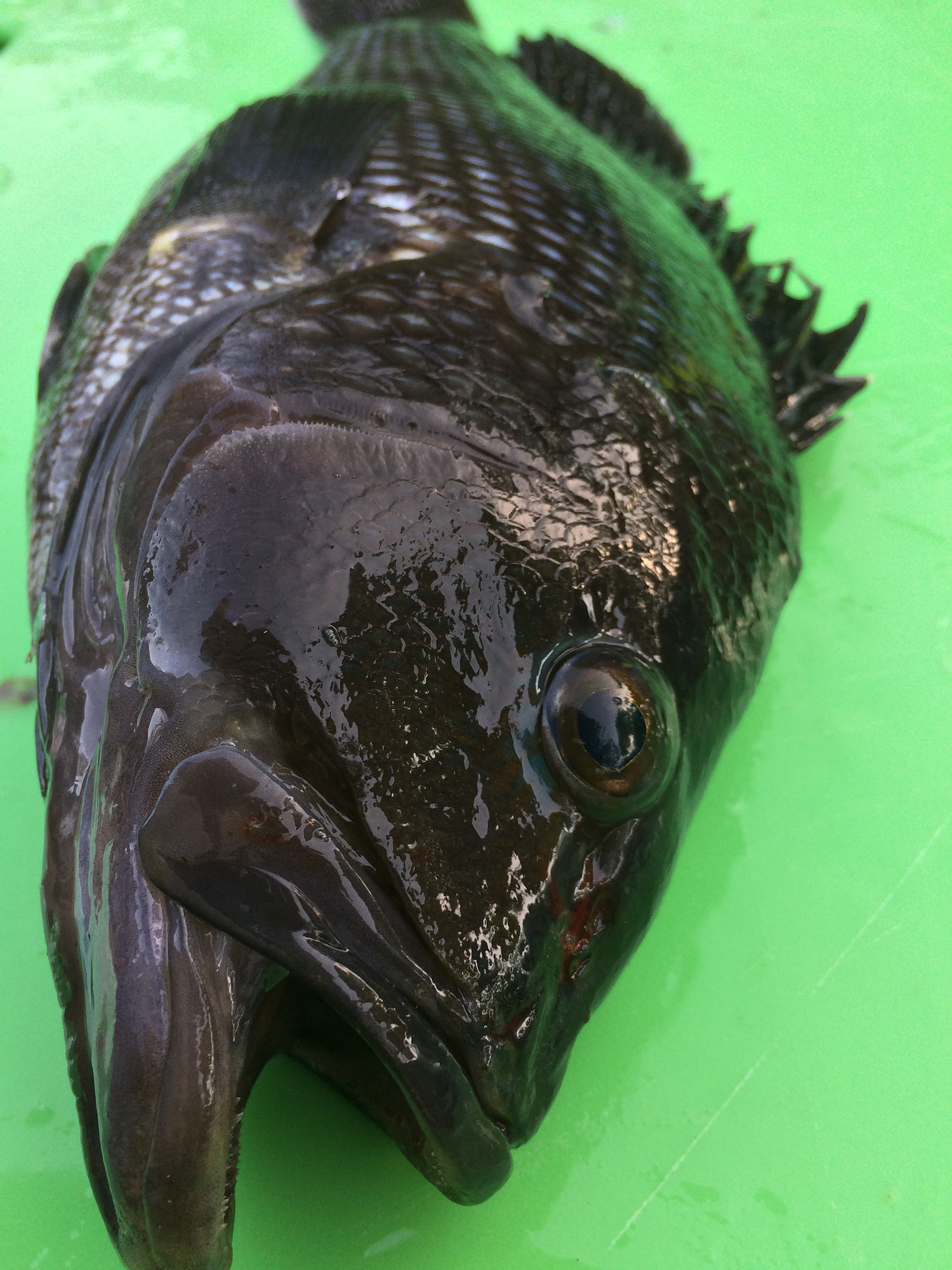 a beauty of a sea bass

noon. no time for lunch, 41’ of clean clear water. 72° on the surface. “Nice school of something” comes the call from the flybridge. Brian Quimby takes up jigging with a big smile.

noon time plus five minutes. Penn 965’s are quiet. Nick doesn’t like the look of things, eyes an empty cooler, lights another cigarette, calls for a move. Refire the mains, move to 50’.

12:26 Nothing but blinding cabin window flashes from northeast. Light tackle guys chasing albies along the ledge or bonito in close to Jamestown rocks. No drift here. Should have taken chicken out of the freezer.

12:30 Make a move to 60’. Even the gulls look bored. Notice Yankees hat in the salon. Feeling uncomfortable now. A sea robin comes over the starboard side. Bob does not look very thrilled by this first landing. “Time to switch up the mojo a bit”, says Nick. Rigs get adjusted, colors changed. 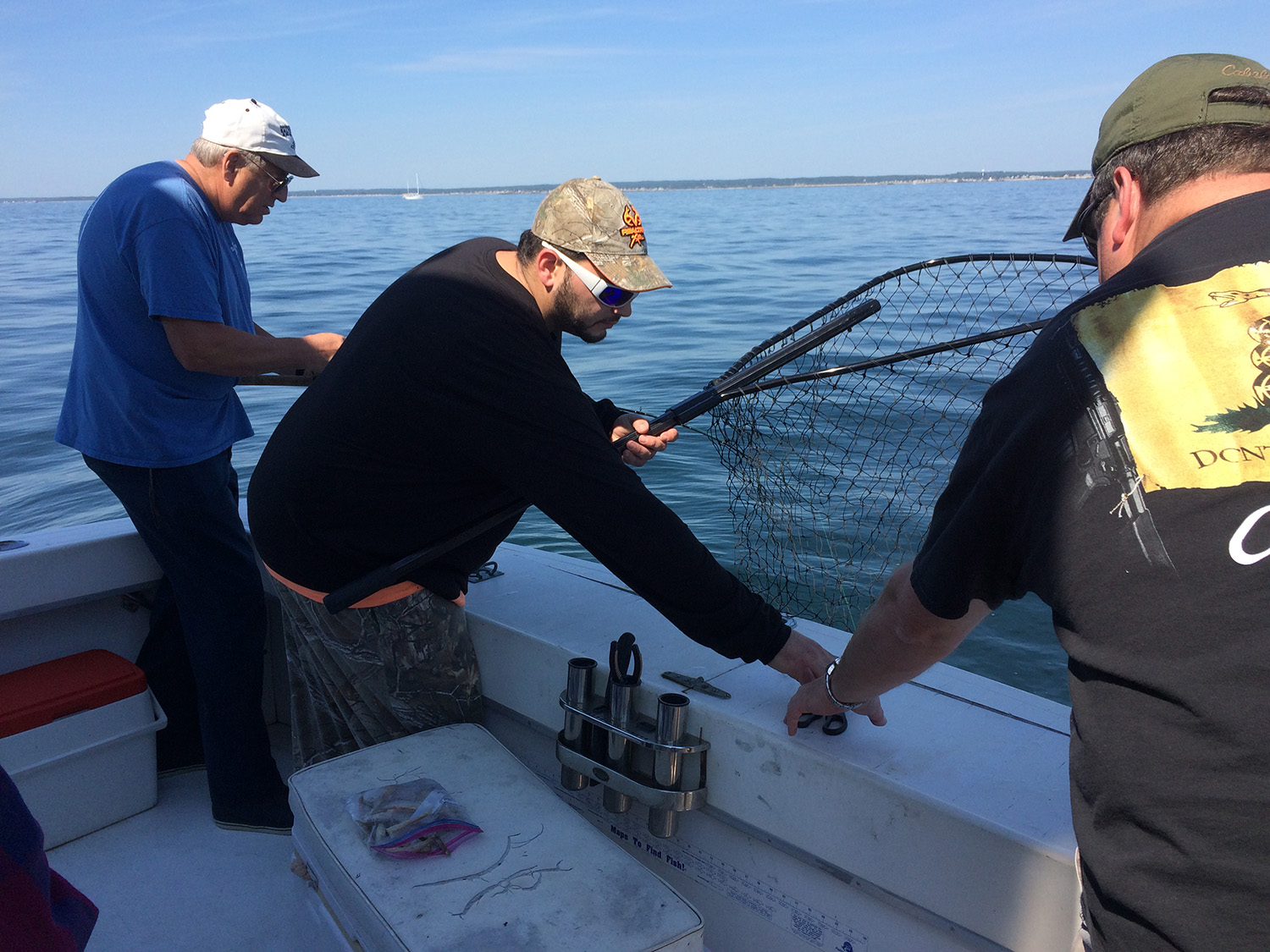 these cats can fish

12:48 65’. Riding the little bit of current near the number 2 hooter. Nick applies whole and half pieces of spearing, their eyes bright. Roger Tellier takes over a rod, braces himself against the side, ready for a record. It’s hot.

1:04 First sea bass in the boat, gleaming, lined with spines and black and blue armor, squid strip still hangs like a long tongue. Circumnavigating the hooter is a pile of bait, peanut bunker, not yet nervous. Circling, stalling, huddling. We see thick swipes of silver stripers below them but no one is eating. Block Island appears just walking distance from us.

1:06 Nick sets up a 7’ rod with green Yozuri swimmer, another with an orange and yellow Atom popper. Coverage above and below. Tight casting with four fishermen, two off the starboard, two off the stern. Sea bass and scup are taking the bait, cooler is starting to get heavy. Bob cuts away the leader for better swimming action. Everyone has a trick.

1:52 Move in closer, near the brown and white Point Judith Light. Roger takes in a few more bass, Brian sweats through the brim of his hat, lands the first fluke of the day, sorry to toss it back. We watch center consoles kayaks and yellow labs in john boats moving this way and that. It’s a parade.

2:01 48’ and hotter. Finally a sea bass hits the ice with my name on it. Roger takes the lead for smallest fish. Brian has 3 sea bass and 2 scup for dinner. Mr. Highliner. Bob is casual, leaning against the cabin door, retired and very happy watching the rest of us work. 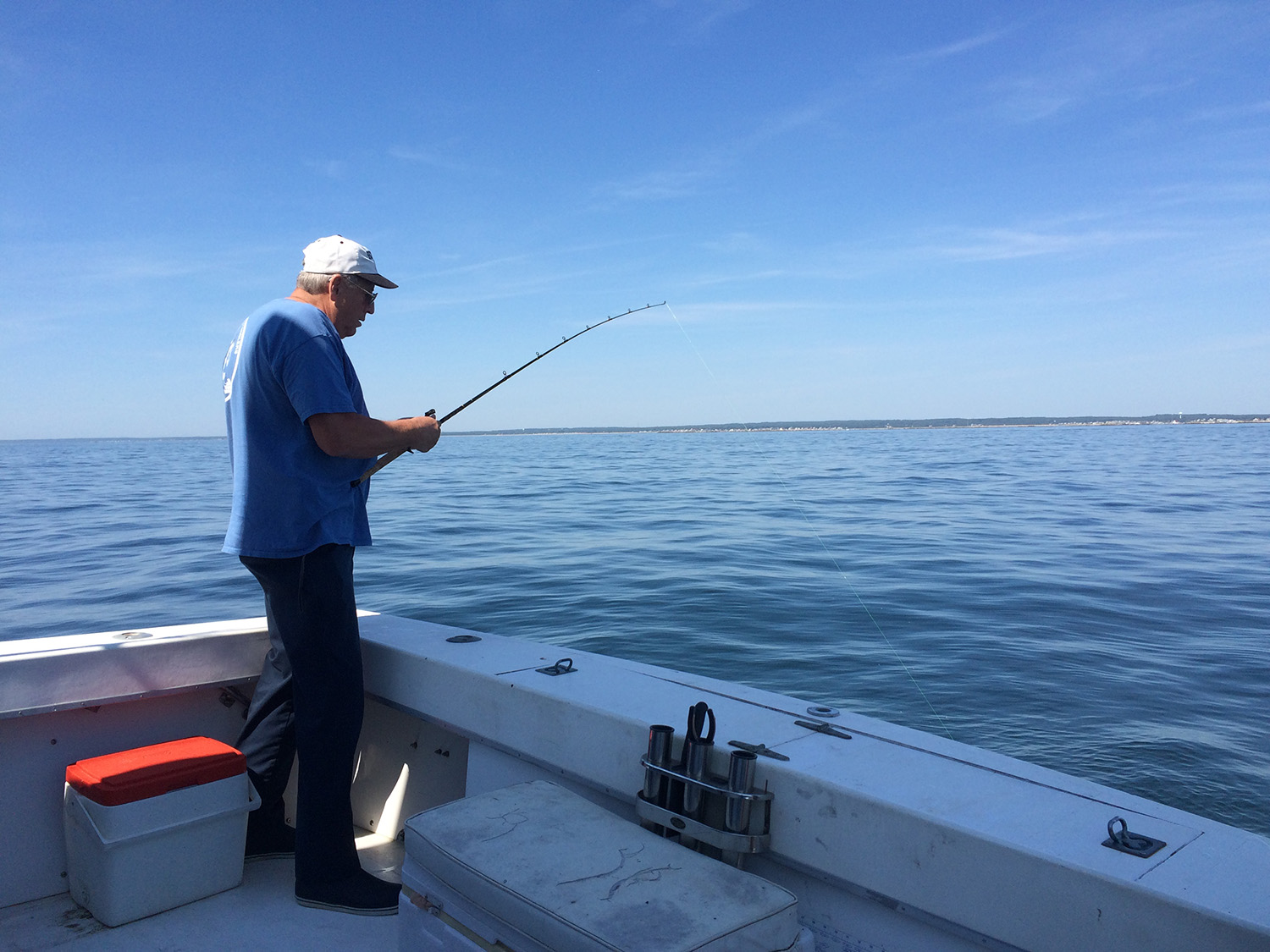 Roger, waiting for something, anything…

3:12 All have caught something. I’ve caught Brian’s line. Twice. Tide gathers steam, ticking clock draw us toward the harbor. For albies. For battle.

3:20 Deadly Dicks are snapped on, drags tightened. With Captain Al’s blessing, Nick and I take to the bow. Water below swirls green, dark blue, even fantastic deep purple. Suddenly silver flashes rocket upwards with faster silver tails quick on theirs. Fish are everywhere. Vessels are scrambling but no one competes with a twin screw Jersey and Captain Al. No one is taking cell phone calls now.

3:33 Nick slams into an albie, fights it right to the net, swears as it bends the hook and goes deep. We all saw it so it counts. It’s surreal, these moving circular piles, alive, undulating, changing colors, swerving, disappearing right before us.

I imagine David Attenborough’s commentary. We cast, fold ourselves over the rail to keep the silver metal low and fast. And pray, like all anxious fishermen do.

3:55 Captain Al again reminds us it’s getting late but there’s another pile just to the west. Just a few hundred yards. There’s more bait on three sides and way off to the west gap. Even at a thousand yards we can see flashes and tails. It’s hard to head for the dock. We see bait and fish right along the short wall, where we started. Where everything smells like batter.

4:something. Back at the dock, smiling, we shake hands, exchange numbers and letters, heave up the cooler. RISAA, Captain Al and Nick really have the fishing all figured out and those gorgeous fast fish really slowed time.

So I called the Fish Whisperer. Now is when stripers really head for Block Island but they are fickle, their appetites fluctuate and frustrate. Catching them doesn’t seem to be as easy as it was years back. That said, Islanders enjoy a long view of those beaches and...
Keep Reading

March is a lovely month. Spring breezes stir the ocean, energize the daffodils and rally the laundry to dance on our clotheslines. Bursting with changes, March is all about a reawakening of our senses and our waters, for fishermen two things deeply intertwined....
Keep Reading