“He can fish from sun up to sun down”, Paul Lavoie said of son, Andrew. He started fishing competitively at four. He’s the Rhode Island Bass Nation Angler of the Year, for the third year in a row. He finished fifth in the country at Tennessee’s Bassmaster Nationals against teams from 25 states and Canada. One year he caught a 6.5 pound largemouth on his birthday and a 3.9 pound smallmouth on his birthday the year before. He’s been the subject of columns by ESPN writers. He’s running out of trophy shelves. I asked Andrew why had no sponsor. After a few moments: “Well, I haven’t even gotten past ten. I’m only nine.” 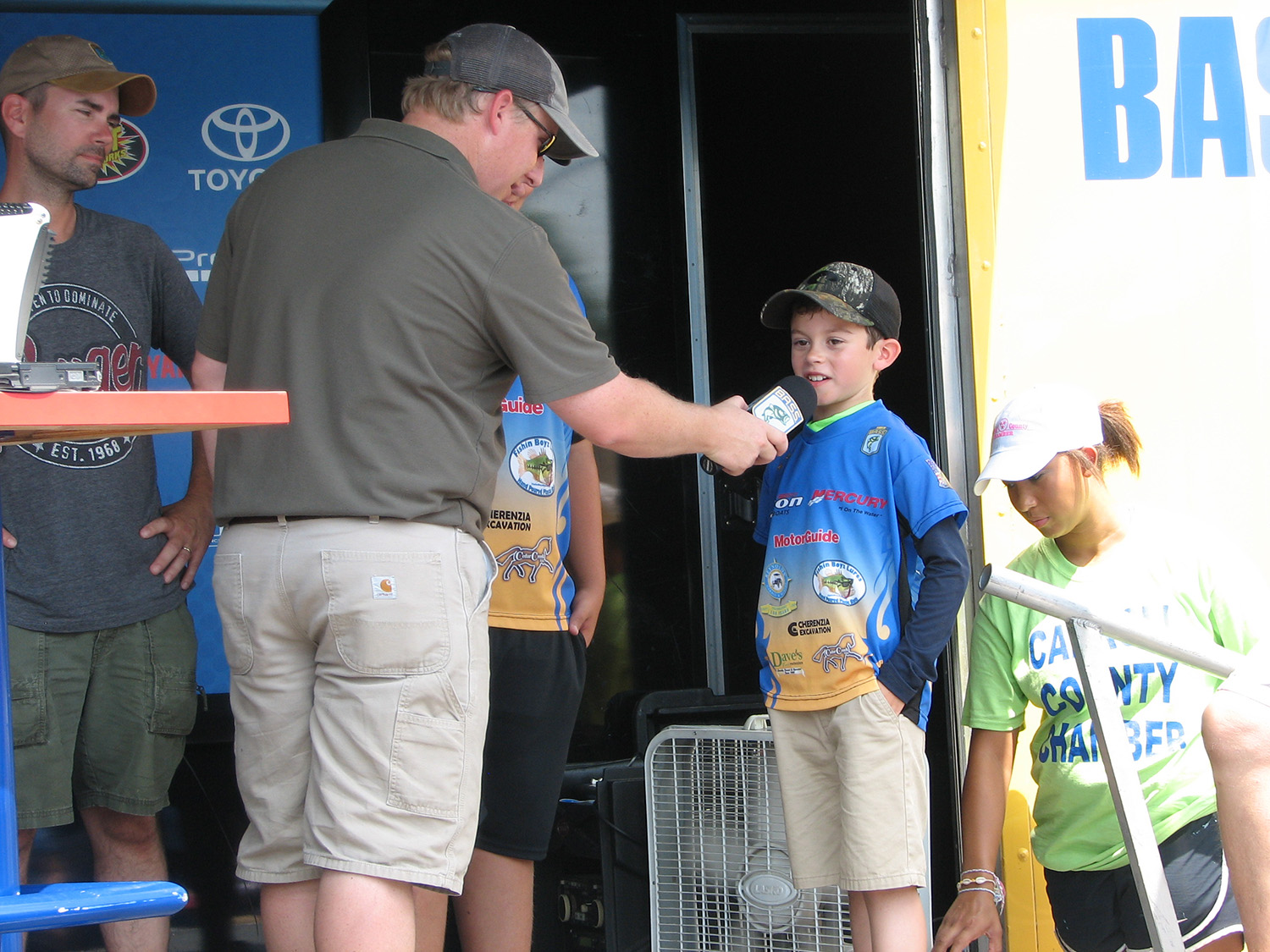 His voice is youthful sweet, his words logical and answers honest, like those of an old man from Downeast Maine. Andrew has trophies lumped up on a shelf, awards for lunker fish and a few for angler of the year. Don Barone, Emmy-winning fishing writer for ESPN, calls him Andrew A 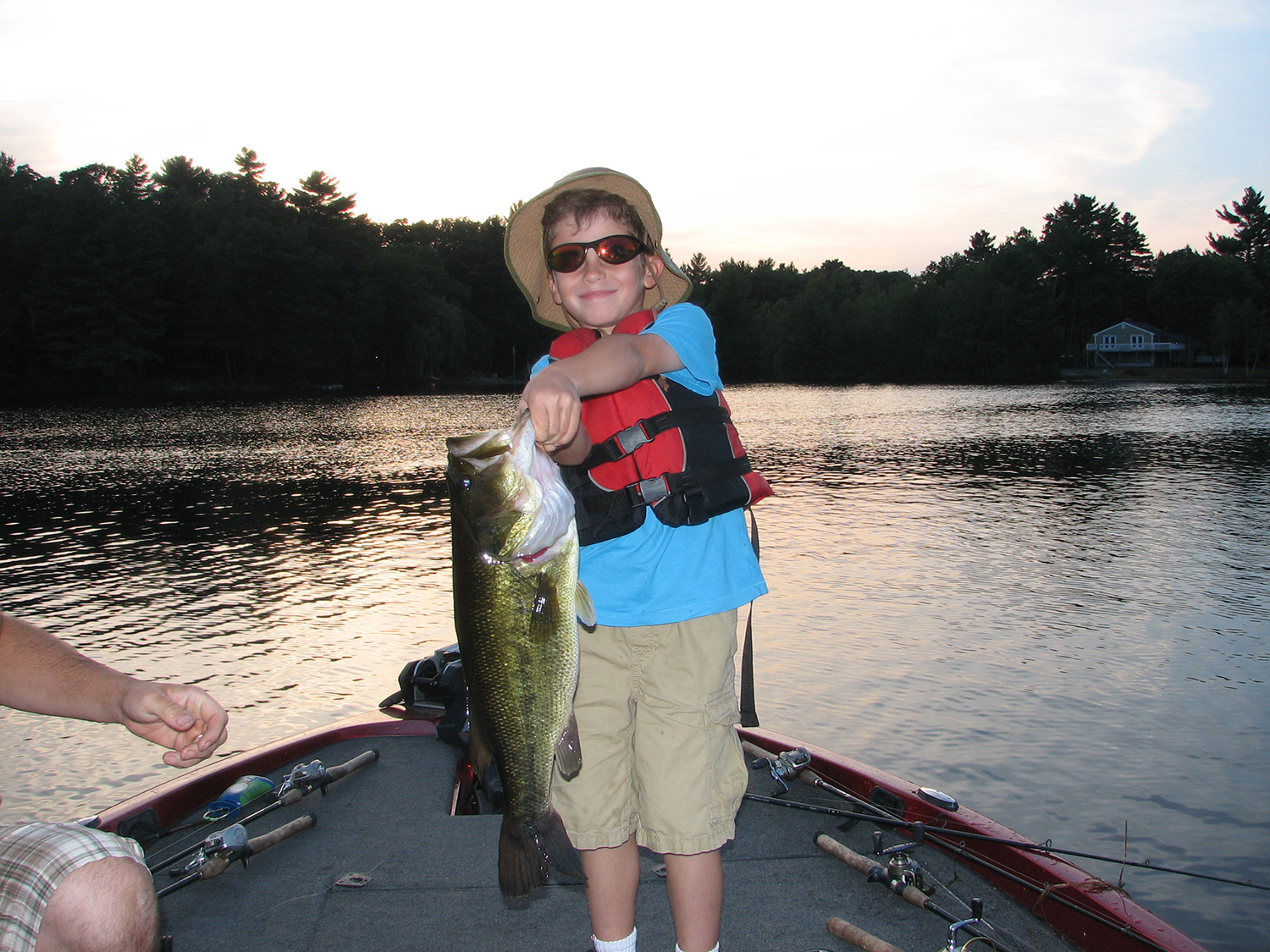 OY8, a reference to their awards banquet meeting and how Andrew signed his autograph book. When we first met at Worden Pond, he was introduced as Mr. Bass. “Yeah, lots of people call me that. I don’t mind.”

Andrew’s brother Matthew, younger by a year, is a fisherman and competitive golfer and it’s not unusual for the two brothers to share bringing in a nice fish. Mr. Bass pointed to Matthew, telling me, “That’s my best friend.” When fun fishing, Paul says, “we try to make it fair, so no one is catching five and one is catching nothing”.  With his dad, Andrew fishes four or five competitions a year. “He’s a really good caster”, Paul mentioned casually. Standing in his yard, Andrew directed me to a house across the street, a solid eighty feet north. “You see those flowers there, in front? I could easily hit those”. Not bragging, just saying. 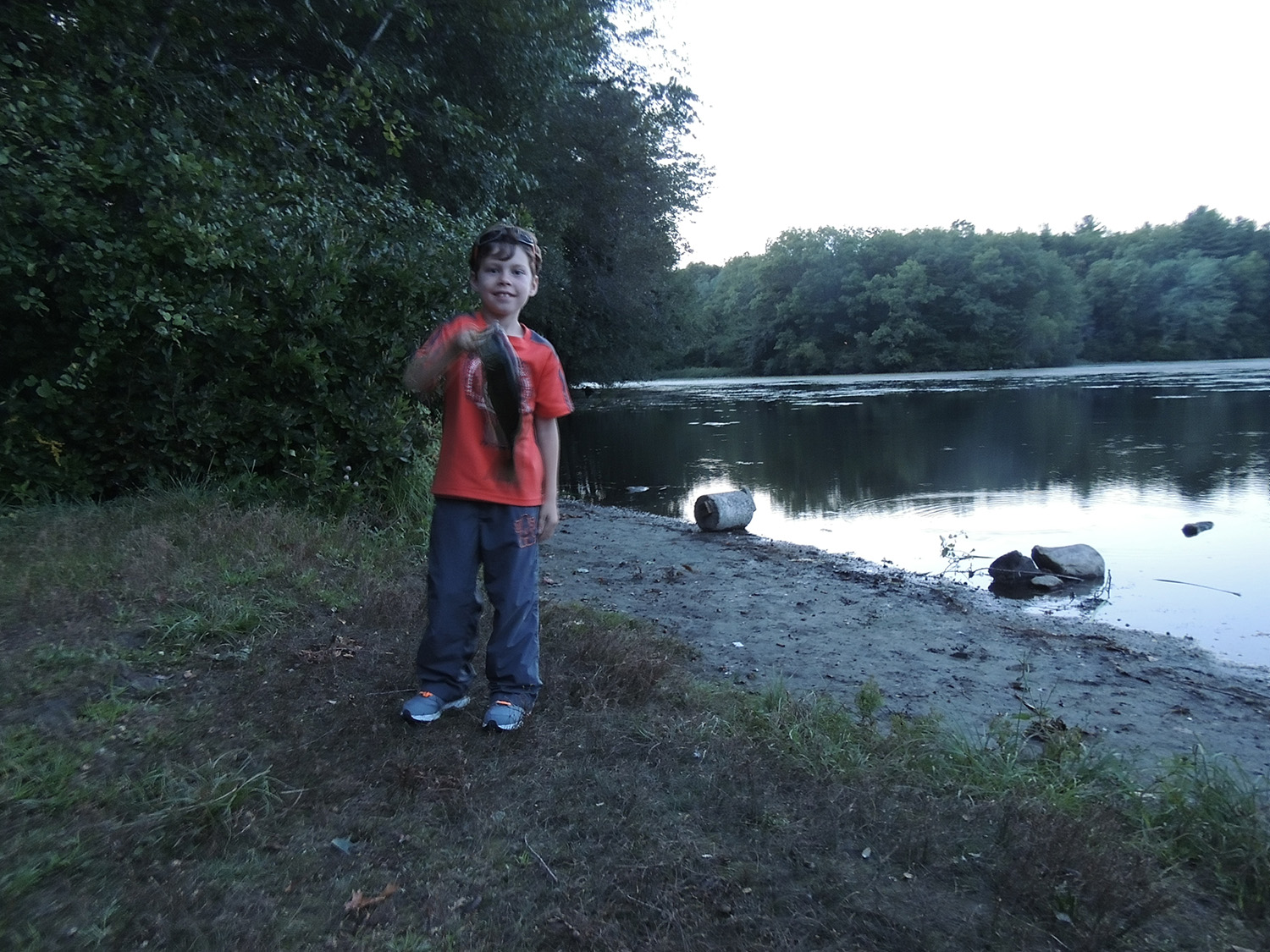 brother matthew brings in another bass!

On time, at Watchaug Pond, he caught a 5.25 pound bass on 8 pound test. He was 5. There’s more. Lots more. He shoots a steady 41 on 9 holes with a really strong short game. On his birthday this year, Andrew shot an eagle. “The last time he actually swung and missed a golf ball” Paul added, “he was probably four years old”. “I’ve never seen me swing and miss”, said Mr. Bass. Both boys fish, play soccer and golf. And go to school. And practice putting in the cellar, because first, they’re kids. 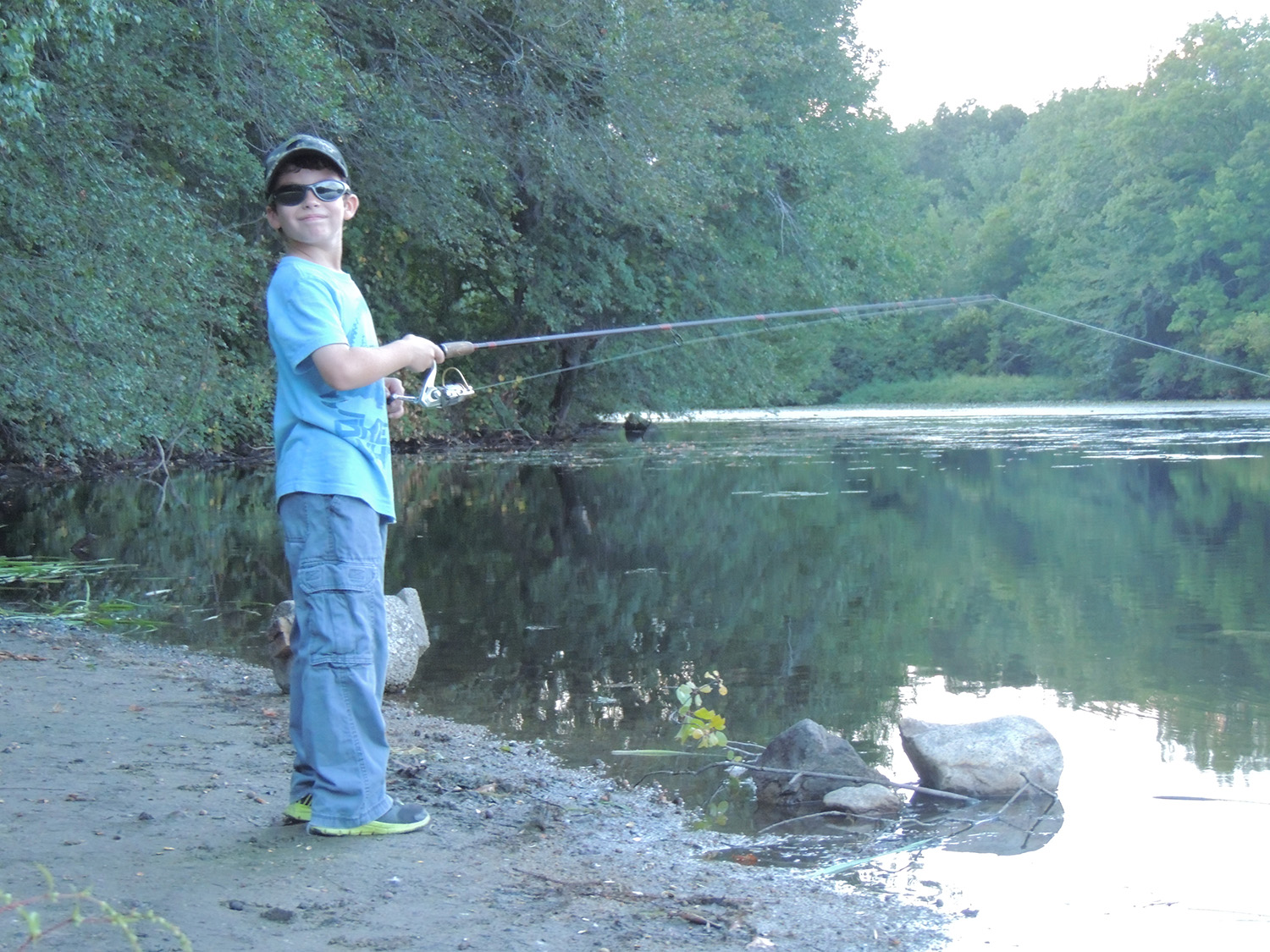 Most Lavoie sentences begin with “we”. They are kids supported by their parents’ patient hands. Any time our conversation headed toward Mom, Kimberly or Dad, they turned it around, back to the boys. Paul was a very successful competing State bass fishermen before the boys were born. Andrew tapped me on the shoulder about thirty times really hard to say his dad was good enough to be a professional, “But he said, no, I want to raise a family.” “You don’t have to put that in there”, Paul told me, motioning to my notebook. “It’s not about me.”

The boys are excited to fish and to talk about fishing. Andrew tripped over my camera bag to point out which awards were his brothers, saying they may someday need a trophy room. Like Rory McIlroy. Family makes this team work, not pressure. In our pc world, kids are rewarded just for competing, just for running the field. Andrew already knows it’s not about the metal, it’s about the day. They make clear that everything is no big deal. Matthew kicked a soft soccer ball around the room.

After one of Matthew’s rounds at the World Golf Championships on North Carolina’s Pinehurst links, “the most beautiful course in the world”, he assured me, just a few days after the Bassmaster Junior Nationals, it was back in the car and off to the zoo. Other parents saw them losing valuable practice time but these parents saw a fun trip. Kids love elephants and feeding carrots to giraffes. What a shame it would be to miss that. In a field of 60 countries, Matthew finished 94th in the world. Balance.

He has some other friends who fish, like his cousin Cameron Rhodes, with whom he fished in Tennessee. “We fish as a team, just so you know”. He has a few rituals, like “For breakfast we always get Dunkin Donuts, as a treat. That’s a ritual.” So Rhode Island. “My favorite hat to wear is my Costa hat that I got at the Nationals.” He was quicker to show me the hat than any trophies. This was a lot for one sitting, I mentioned needing more room for my column. Andrew offered to get me some paper and tripped over my camera bag. A brief mention of one day going pro was quickly cut off by his Dad. “College comes first.”

The Nationals were a big deal, especially at his age, even for a guy introduced as Mr. Bass. He didn’t get nervous, really, because he already understood the big picture. It was supposed to be fun. A slow day fishing is no big deal. Up on the winners stage, he gladly told everyone listening what he used to catch his bass. “I do like to fish a swimbait”. No secrets here. Later he stepped away unannounced from his dad to have a quick chat with Tournament Director John Stewart. Paul smiled and said he chit chats mostly with parents. Especially on the golf course.

The season is done, school has started, time for soccer practice and games.  “Now that the tournaments are over, it’s just like, go out and have fun, just enjoy the time. Catch one, catch a bunch, It’s no big deal.”

We all have a lot to learn from Mr. Bass. 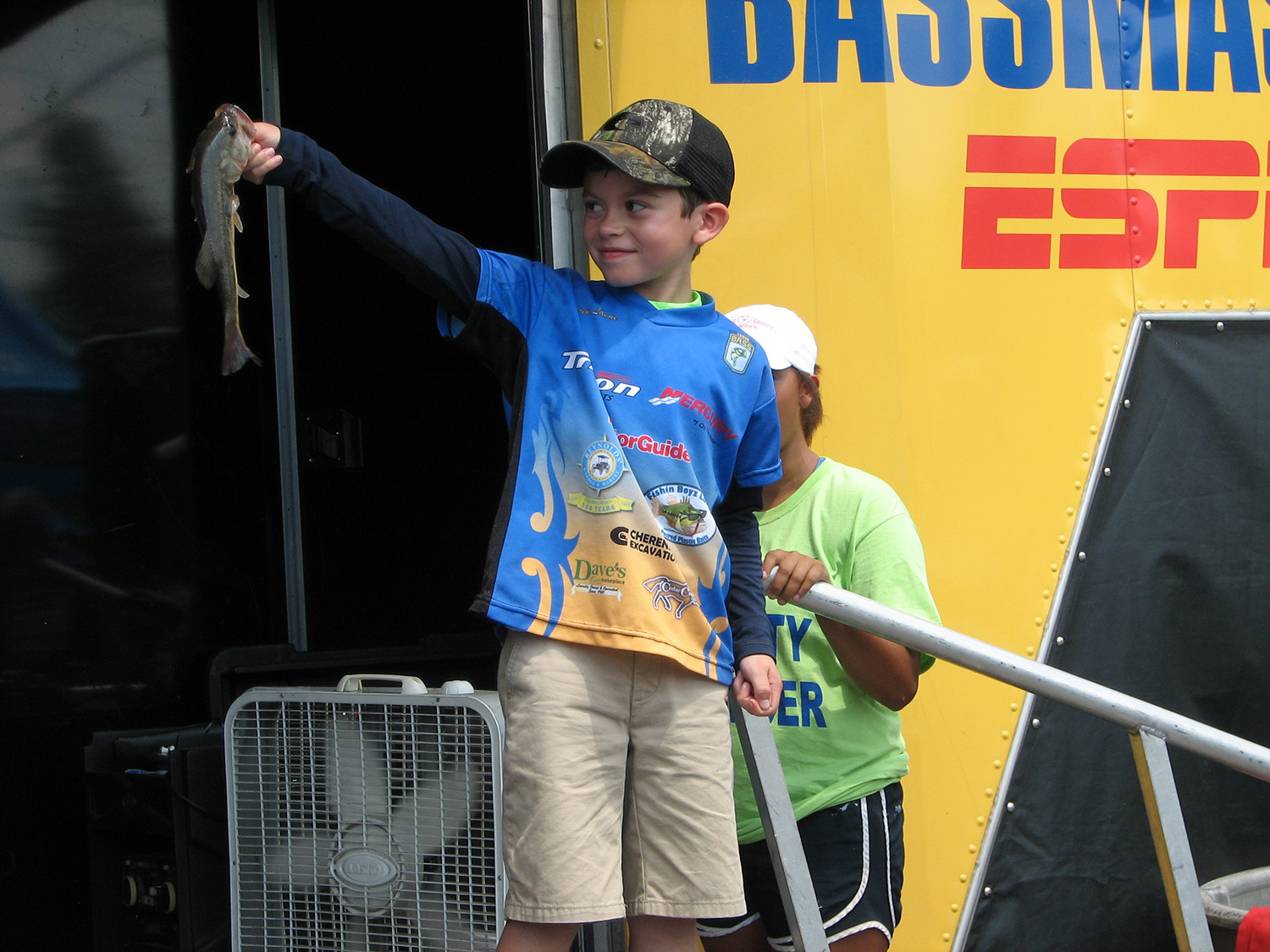 If I may, standard practice after an interview is to review notes and tapes then piece together a story. No piles of paper or voices on a phone have ever made me smile laugh and wipe my eyes as I did after my meeting with the Lavoie family. These are exceptional young men, blessed with undeniable talents and gifts. It is their parents who make them run, not pressure, as a happy family who understands the importance of fun and being young. Seldom have I had such pleasure in meeting new people and I thank them for opening their door to me.