Smackin’ it with poppers, Brian Hall and a kayak

There are big fish all around us. Up North, where Narragansett Bay becomes the Providence River, menhaden are filling coves and the bass know it. The best tip right now is to liveline a few snagged pogies and work the schools. It can be a crowded place, especially when the word gets out and a lot like work to get through the crowds, to find a quiet spot that holds fish. 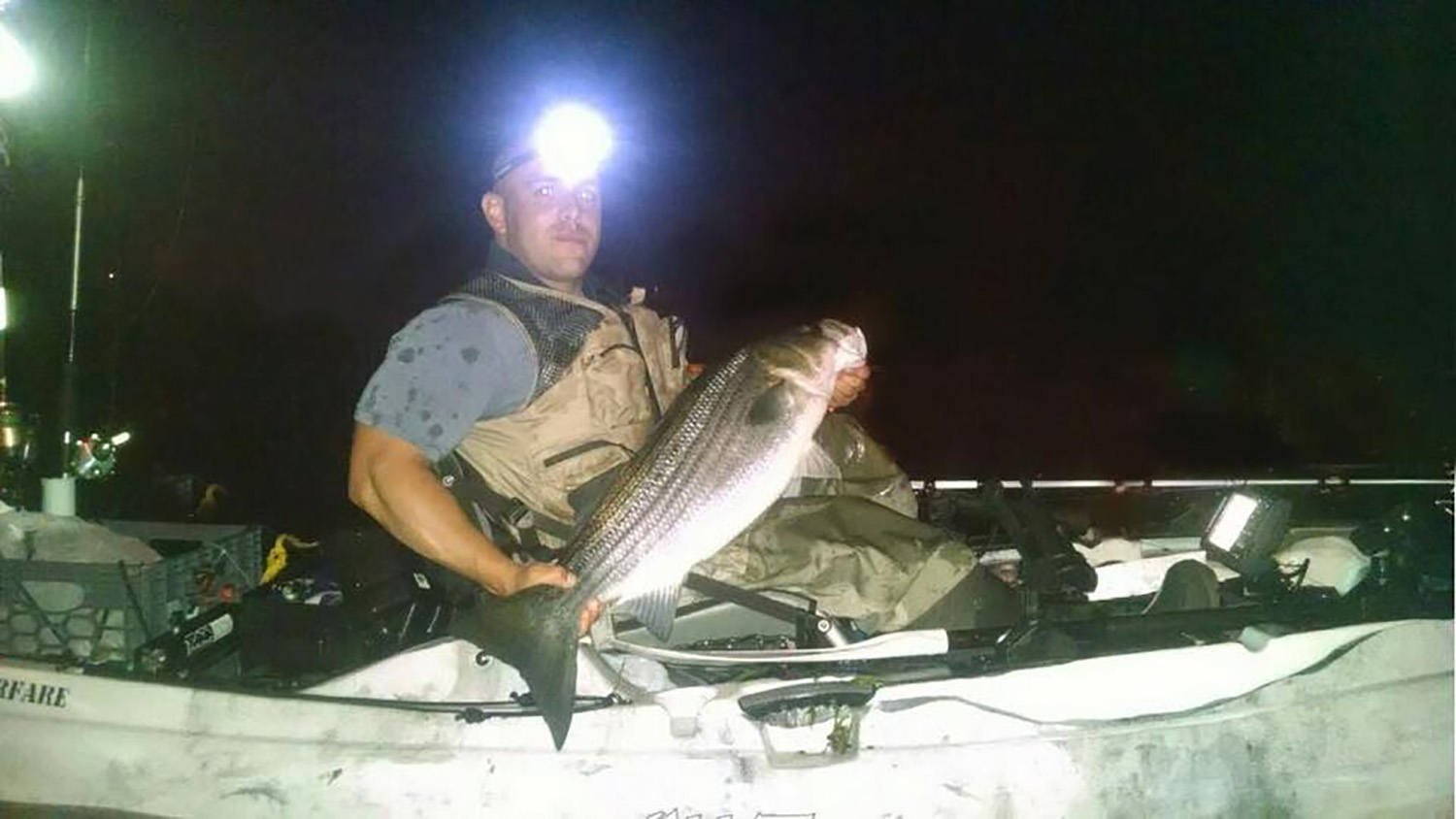 brian hall hauls in another bass

Tiverton kayak fisherman Brian Hall knows this; he’s been working some off-the- beaten-path spots, having all the luck recently on what he said was, “really the best week of fishing of my life”. It takes a lot to paddle away from where you know there are fish and work to find a new spot that may or may not hold any, let alone bigger fish. And to do that at night. He’s persistent, using his skills, local water knowledge, and a kayak outfitted like a battleship. Modern fishing kayaks can be outfitted with electronics like fish finders and GPS systems, ergonomic seats, scuppers and for some, motors to assist arms worn out from casting. I thought mine was cool because it had bungee cords and a cup holder. For soda, not a beer. Kayak fishermen can now track bait schools, carry more gear, store more rods and, as is the case with Brain and some of his Ocean State Kayak Fishing buddies, store a warm pizza in a forward hold.

Brian has landed a few nice bluefish but lately it’s been all stripers coming aboard. Landing a 40” bass is a tremendous feeling, especially when you have rocks or sand beneath your feet but how about hauling in thirty pounds of uncooperative bass with a hook in its mouth and a tail for made for slapping. Best part of the whole fish story is that Brian returns his fish. The local bass fishery, especially for those larger specimens which tend to be females, have taken a hard hit over the last few years so it’s really refreshing to see fishermen bragging about the fight, the catch and the release. The whole deal is now the trophy, not just the fillet photos.  A tip of the camo hat to Brian for his skill, his amazing week of fishing, his calling it luck which I suspect it was not and for giving the rest of us a chance to catch one of those big fish he returned.

On the west side of the bay, even as far west as Stonington, Captain Jerry Sparks runs kayak charters in backwaters and salt pond coves frequently overlooked by those concentrating solely on beaches and breachways. The presence of menhaden, buckies and the first waves of silversides are reason enough for plenty of bass in all sizes to feed along grassy edges and piles of rocks in relatively shallow waters.  It takes patience, you have to move spots frequently and you have to understand how fish feed. Taking clients to fish in skinny waters also shows how we are not so much different than our prey. Brian Hall leaves the crowds and strong odds of good fishing to find something better in the same manner that stripers pass through a channel, leaving their beach running school mates behind. Bass are smart, they know there’s bait and less competition in salt ponds, they know herring are moving to fresh waters to spawn so protective coves might be full of them. They know they need that protein to spawn themselves but they can be hard to find on any given workday. Somehow they know there will be cinder worms in one salt pond and not another, while the kayak brigade floats patiently in circles, awaiting an event that won’t happen that night.

“There are lots of perfect spots where you seldom catch a fish”, Captain Sparks told me. He took fellow RI Saltwater Anglers Association member Jim Okon and me into some of his favorite salt pond spots last week, opting for his 17.5’ Proline instead of the kayaks given some light rain, grey skies, grey waters and a relentless 10-15 knot northeast draft that defied predictions from several weather services. But not Kelly Love’s. She could never be wrong. Starting from South Kingstown’s Marina Park, we steamed to The Narrows and to one of the Captain’s favorite “secret” rocks where we broke the ice, hauling in two very nice stripers, the largest measuring 24”. This was light tackle fishing, using a Smack-It popper with Lews reels on Falcon rods. 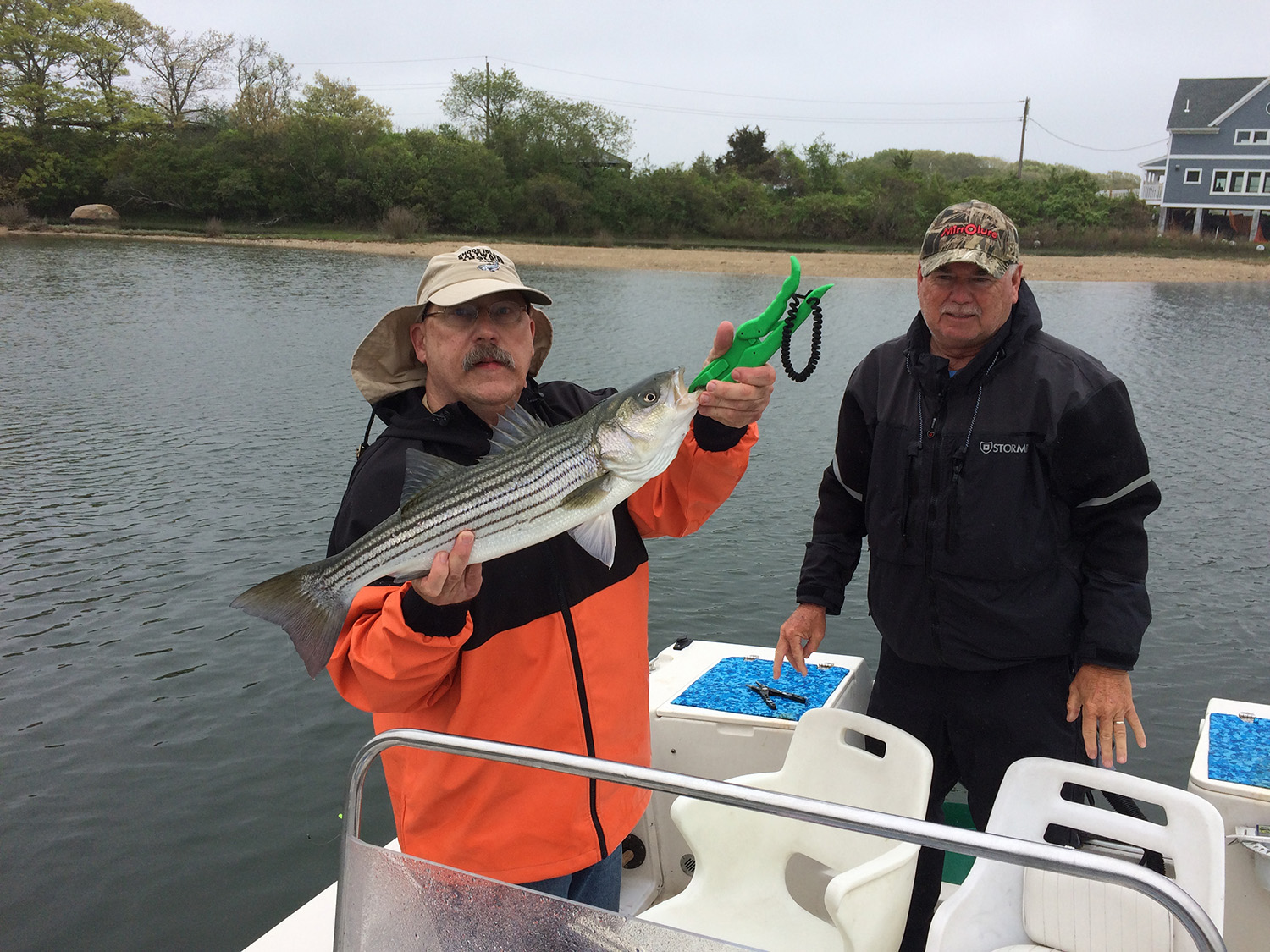 “If you don’t have incoming tides, you might as well go home”; fair advice from a captain who knows these waters well, so we needed to get to areas with more depth. Heading away from Billington Cove, fishing was slow but there were small stripers there, most still wearing coats of sea lice. It’s a chess game, a game of bait and search, looking for a school of fish that were there yesterday but not today. Near Camp Fuller, the Captain instructed Jim to “Cast straight ahead, that way!” In just a flash of a cast, a sharp over the shoulder kind of whip-it move, Jim was on and it was a battle. Captain Jerry was there with instructions and cheers. Jim reeled, lifted the rod, reached to tune the drag, reeled more then muscled it to the rail  Captain Jerry grabbed ahold of the leader to bring in a fine 27” striper with a big 6” neon green popper tightly lodged. One cast, one fish.

Despite the rain and wind, we caught almost twenty bass and blues, we don’t need to revisit all the ones we lost, learned how productive small coves can be this time of year and how much more fun it is going fishing than to work. Except for the captain, who was doing both. Brian Hall found big bass right around the corner, Captain Jerry found fish right under our noses, Jim Okon learned he needs to buy a kayak and well, I took a lot of pictures. Someone had to work…

Joe Zottoli told me to be at the dock for exactly 8:50 a.m. It was very clear that details were important, like being on time. He’s studying Biological Oceanography at URI’s Graduate School of Oceanography, runs the deck of their 53’ workhorse research vessel, the...
Keep Reading

Apparently three times is the most a person should use the dishwasher to clean their tackle boxes. More times than that brings only outside voices and wagging fingers. We do have some excuse for our insensitivity or general sense of distraction this week: our focus is...
Keep Reading

Captain Jack Sprengel of East Coast Charters is finding and catching giant striped bass with the new Shimano Coltsniper Splash Walk top water lure. From the deck of his Everglades 325, he will put you on fish in Narragansett Bay or take you offshore for a dream tip. Fish Wrap has the whole story this week.