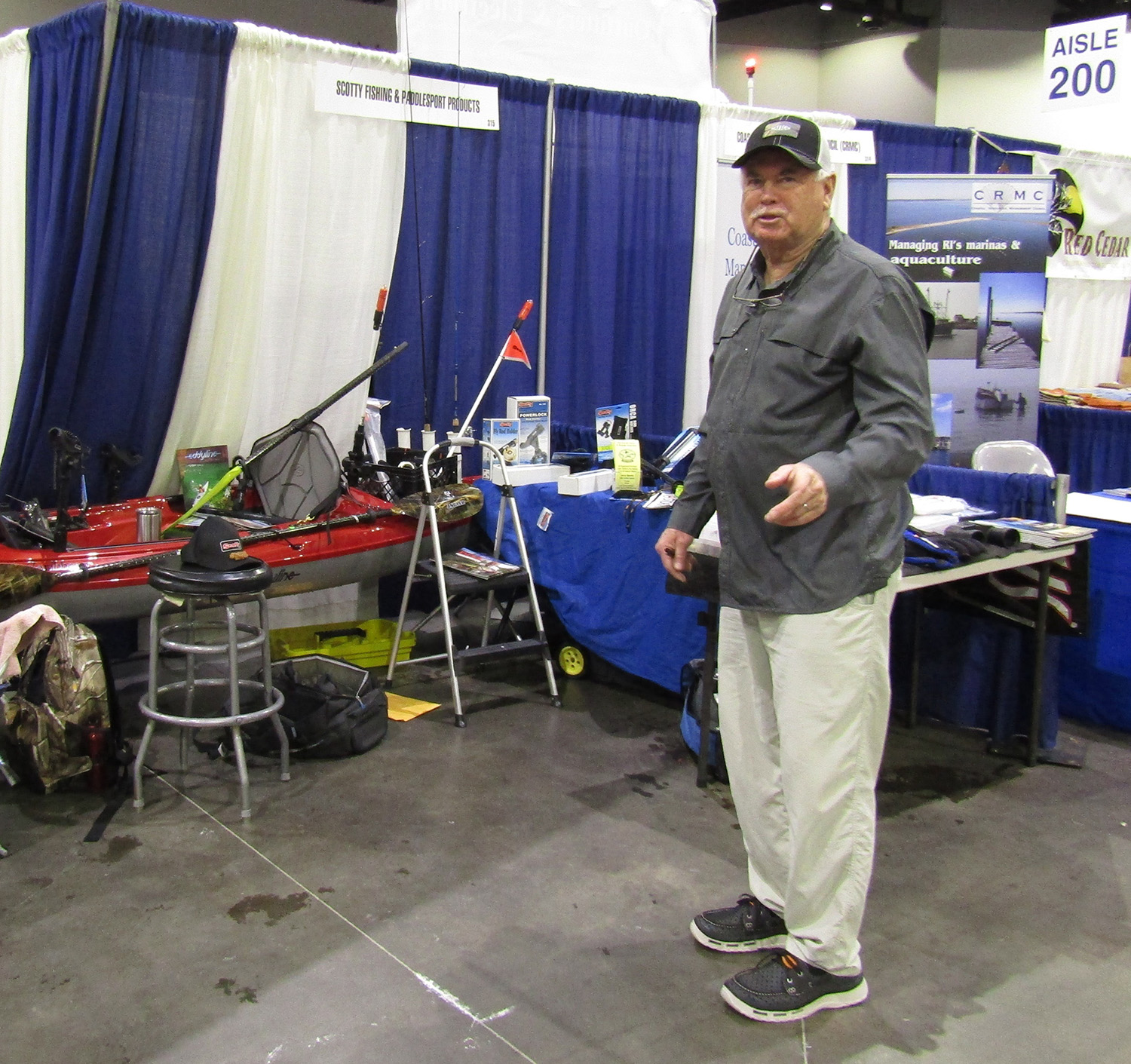 Fishermen have forever fashion classics like khakis with plaid shirts, tennis shoes for wading summer streams, floppy hats adorned with favorite flies or Al’s Goldfish and tan fishing vests, which of course can be worn in all seasons. Millennials have soda bottle fleece layering, puff jackets with stuffing traceable back to some unfortunate naked goose, sling packs you chase in circles trying to open and carbon fiber fly boxes, which do nothing for showing off your big Wooly Bugger at cookouts. At this year’s N.E. Saltwater Fishing Show, located conveniently next to the cultural showcase that is Monster Jam, fishing and fashion walked the aisles looking their best, their worst and occasionally like a monster sized train wreck.

Friday’s temperature breaks between parking garages and convention center show floors were severe for fishermen but nevertheless, they persisted. They also persisted in matching camo with unflattering horizontal stripes, clever fish themed t-shirts and unfortunately, with yoga pants. Winter is hell but fashion is brutal.

“Fashion is a weapon that you can use when you need it,” said Donatella Versace.

Dressing someone in drooping feather earrings, wrap-around camouflage sunglasses and fish-o-flage top with a few Narragansett tall boys and some blue cheese jerky gets you serious firepower.

Camo was king. There were camouflage hats, scarves, hoodies, vests, bandanas, shirts, belts, pants, socks, slippers and an inappropriately sized tank top. Camo is no longer the blurry print of dreary olive drab Army knockoffs or lounge wear for kids in pilfered Goodwill donations. Designers have woven military utility into everyday, work and formal wear. What else would any self respecting duck hunter wear to the Sunday table? Several were the sightings of camo unmentionables hidden less than discretely below muffin tops and snorkel jackets with untraceable stuffing. One young lady attempted some midriff efficiency, casually exhibiting a sliver of camo thong, at nearly every booth, interrupting sales pitches while exciting the show’s GDP at each stop.

“Sometimes the songs that we sing are just songs of our own,” wrote Robert Hunter, which goes a long way to explaining how we resulted in such a fashion maelstrom. 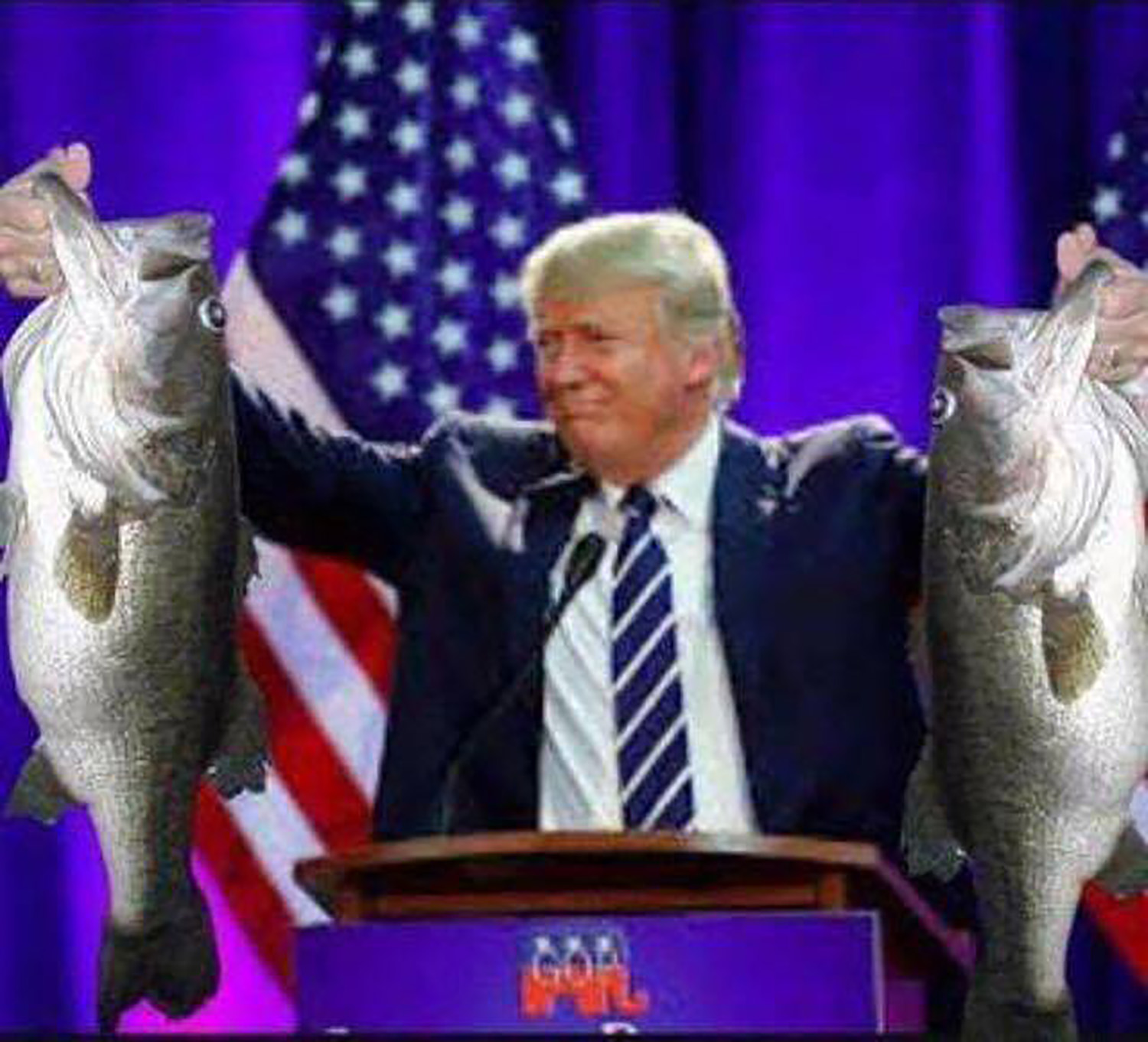 Bar stool veterans wandered in threadbare jeans with matching jackets, circling repeatedly for bathrooms providing free showers. To lubricate joints and wallets, there were breakfast beers, lunch beers, late afternoon beers and for lofty sail contingents, secret beer coolers found only at fly tying booths. Hats with bands of electric pinks and neon greens somehow stay popular but those with complete camo were in the vast majority. Hats proclaimed positions of fishing elitism, like “Basshole”, helpful suggestions like “Fluke You” and confusing directives like “Fish Hard”. There were a few bold red hates, sorry, hats, declaring “Make Fishing Great Again” which I thought fishing always was. Many had hooks clipped to visors in case you’re out looking for largemouth and suddenly have need for a rusted 9/0 tuna circle hook.

Nothing forges a relationship better than three special hours mingling through rows of rods, electronics requiring a PhD and center consoles no one can afford. Many women marched as silent strong partners, arms crossed, eyes forward, lockstep with their male companions or a just a few Ugg prints behind. Pacing slowly, they endured their partners chewing, pointing, drinking and dribbling their way through endless aisles, loading up on lures, leaders and plastic bags laden with oily smelly rubber swim baits. Lingering in front of $27 wooden plugs, several women questioned their relationship choices. There was little hand holding.

Parents pushed carriages of squirming kids who grabbed stickers for companies they’d never heard of to adhere to all sorts of things they don’t own. Some wore mohawks or mullets dashed red or purple. Camo is also big with the younger crowd, right down to the cutest little teensy weensy onesies and unwashed bibs prognosticating them a world’s greatest deerslayer or Grandma’s favorite angler. One lucky youngster, in Realtree regalia, clutched his father’s middle finger and a new crossbow, a perfect choice for someone still requiring a car seat.

Luckily, there was a new crop of űber clever fish t-shirts.

Vendors hawked classics like, “Earn Your Stripes” above a schoolie rockfish wearing a helmet, “Bite Me” for the soon-to-be Hall of Fame Neutral Nation punk rock crowd and “Happy Hooker” for the woman who has everything. “Racks and Reels” remained a perennial favorite along with the silly “Ship Faced” and “BassAholic.” I’m unsure if garment makers include a tag alongside care instructions with a list of appropriate places to wear such items. One shirt let me know I could “Own The Surf” which I surmise would only increase my property taxes. Some folks were “Chasing Tail” which likely has less to do with caudal fins and more with the curves of Thurbers Avenue. Most shirts appeared to have fit much better last summer.

Absent was the codfish. Only one booth had a once obligatory “Codfather” shirt, but New Bedford’s Carlos Rafael may have taken the shine off that label. Sports jerseys promoted favorite hockey and football teams, mostly worn by people I suspect would struggle with a folding chair let alone a rugby ball.

And then there were the yoga pants. Supporting my high journalistic standards, I’ve exhaustively researched this fashion phenomenon.

Favorited by physique fans while disparaged by people with good taste, yoga pants are revealing reminders of our country’s expanding waistlines, overexposed investments and Cole Porter’s observation that “Anything Goes”. They were pulled high and tight then folded low, with leopard and flower prints and of course, camouflage. It appeared most had not practiced much yoga or exercise of any form recently.

That said, I’m unwilling to get in a bind with a thong of athleisure supporters, or encourage a visit from stretchy pant protesters. Suffice to say that by the end, exhibitors headed for the backdoor, stretched threadbare from the shear volume of work and this reporter, not wanting to fall behind, settled into a pirate’s booty of notes, “tight lines” jokes and scores of photos blurry with camouflage everything.

Based on the colors, layers, styles, fish prints, beer over jerky stains and my new fuzzy camo slippers, I’d say this was a great fashion, excuse me, fishing show indeed.

It was downhill right from the ramp

Darkness casually faded into the summer excitement of unloading boats for a day chasing albies and striped bass. Galilee’s new boat ramp, designed to launch three boats at once with sturdy docks for coming and going, was bustling. Overhead were stars and stripes of...
Keep Reading

Ecocycle Your Christmas Trees and Trout Will Benefit. That 2020 calendar belongs in a recycle bin and your Christmas tree belongs in a river. There’s not much to be done about what we all just went through but this year we’re starting off with a new hope. Since 2018,...
Keep Reading