Birth of the Trout from Lafayette 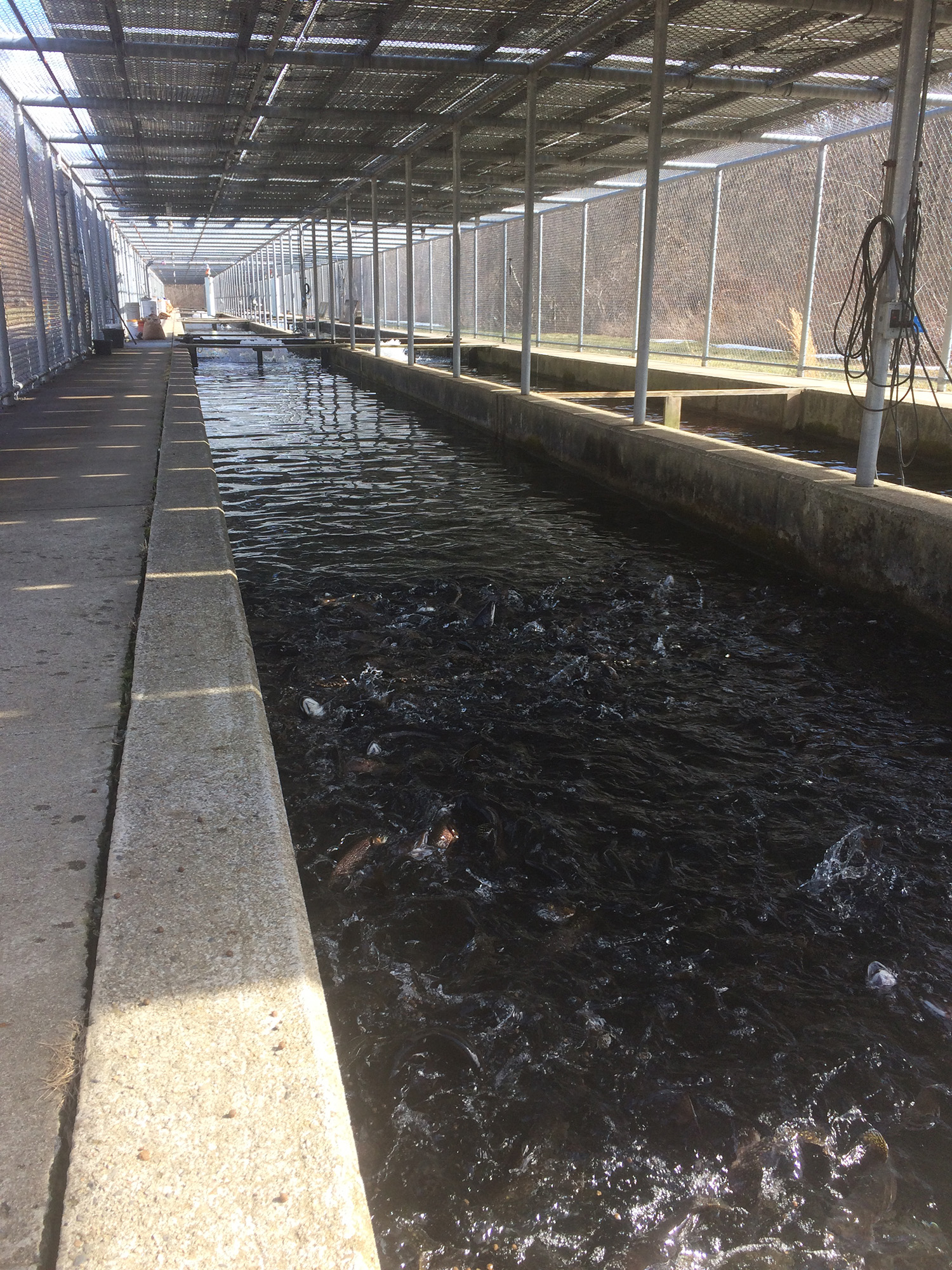 We’re on the heels of Springs greatest day.  Any calendar can announce a change of seasons but the opening day of trout season is the ultimate announcement of winter’s departure. In advance of the launching of boats and trampling of grasses,  RIDEM’s Lafayette Trout Hatchery is preparing to restock ponds and rivers statewide.

In the few weeks leading up to the second Saturday in April, their two trucks will be busy delivering almost 80,000 trout for anxious anglers. District Resource Manager and biologist Ken Fernstrom has spent 18 years raising fish and this year, he’s been caring for 200,000 rainbows, 48,000 brookies, 50,00 brown trout and 40,000 salmon at North Kingstown’s Lafayette Fish Hatchery.

Lafayette’s 54 acres, ideally betwixt the Queens River and Narrow River watersheds above Goose Nest Spring, dates back to 1918. 51℉ groundwater sits just four feet below the surface. Working in conjunction with the State’s three other branches in Perryville, Carolina and Arcadia, the whole hatchery system employs just six staff. “In other hatcheries, in other states, that’s a shift”, said Ken.

Rainbows, Oncorhynchus mykiss, are non-native trout favored by sportsmen. Hailing originally from the Pacific Northwest, they’re naturally acclimated to waters with higher Ph levels. To accommodate them, Ken and his team harden their waters with natural, inorganic compounds like calcium chloride. Browns, Salmo trutta, are German immigrants. 4900 were shipped here and stocked in Michigan’s Pere Marquete River in 1883 and the Baldwin River in 1884. Brook trout, Salvelinus fontinalis, members of the char family, are our only native trout species. The fontinalis translates into a lovely “living in springs,” giving you a fine image of where they are meant to thrive.  A few “golden trout”, rainbows originally raised by URI to have a distinctive, bright flesh coloring, are stocked for anglers who can exchange a picture of their catch for a DEM pin. 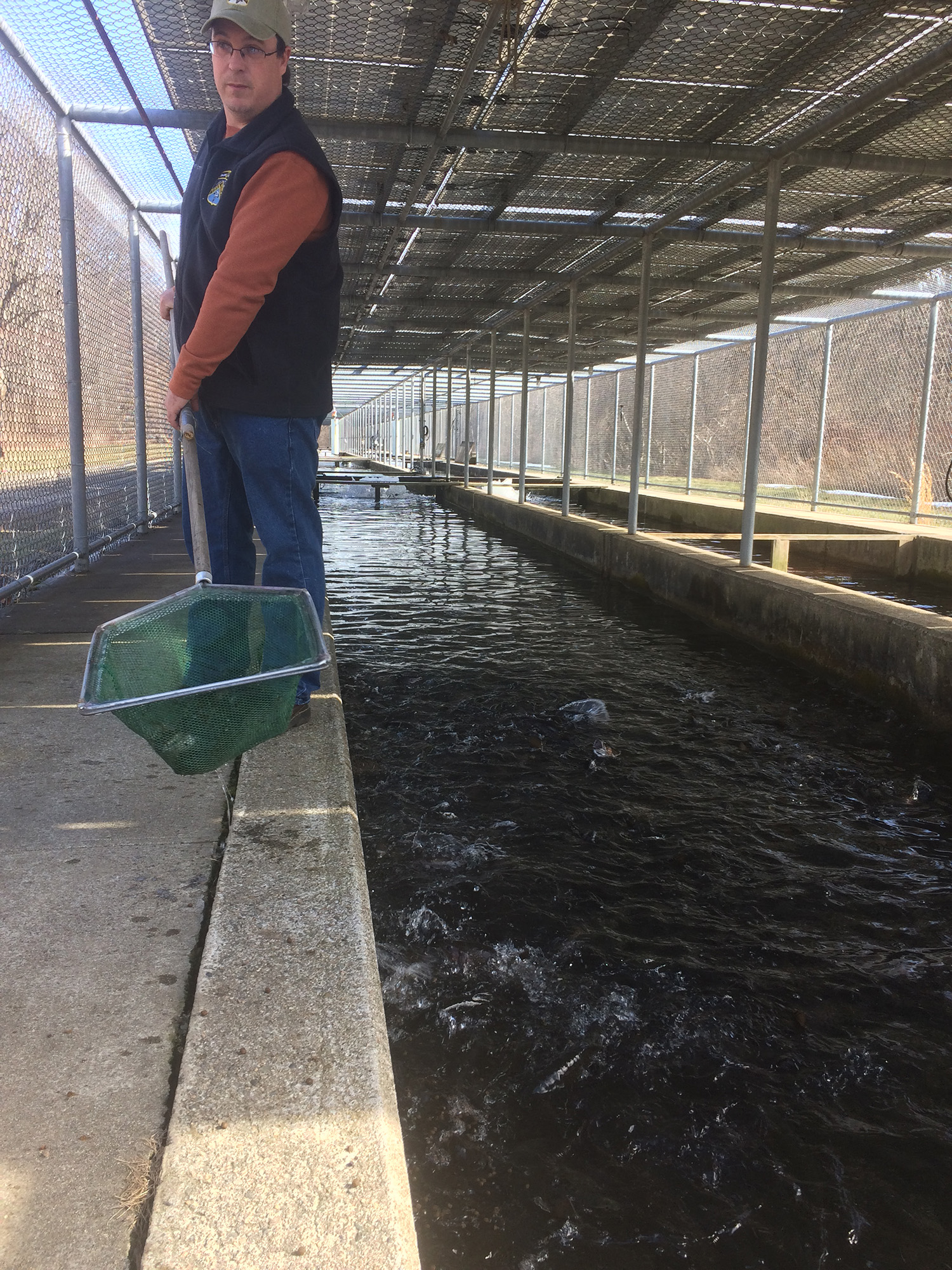 Ken Fernstrom with a net full of stockers 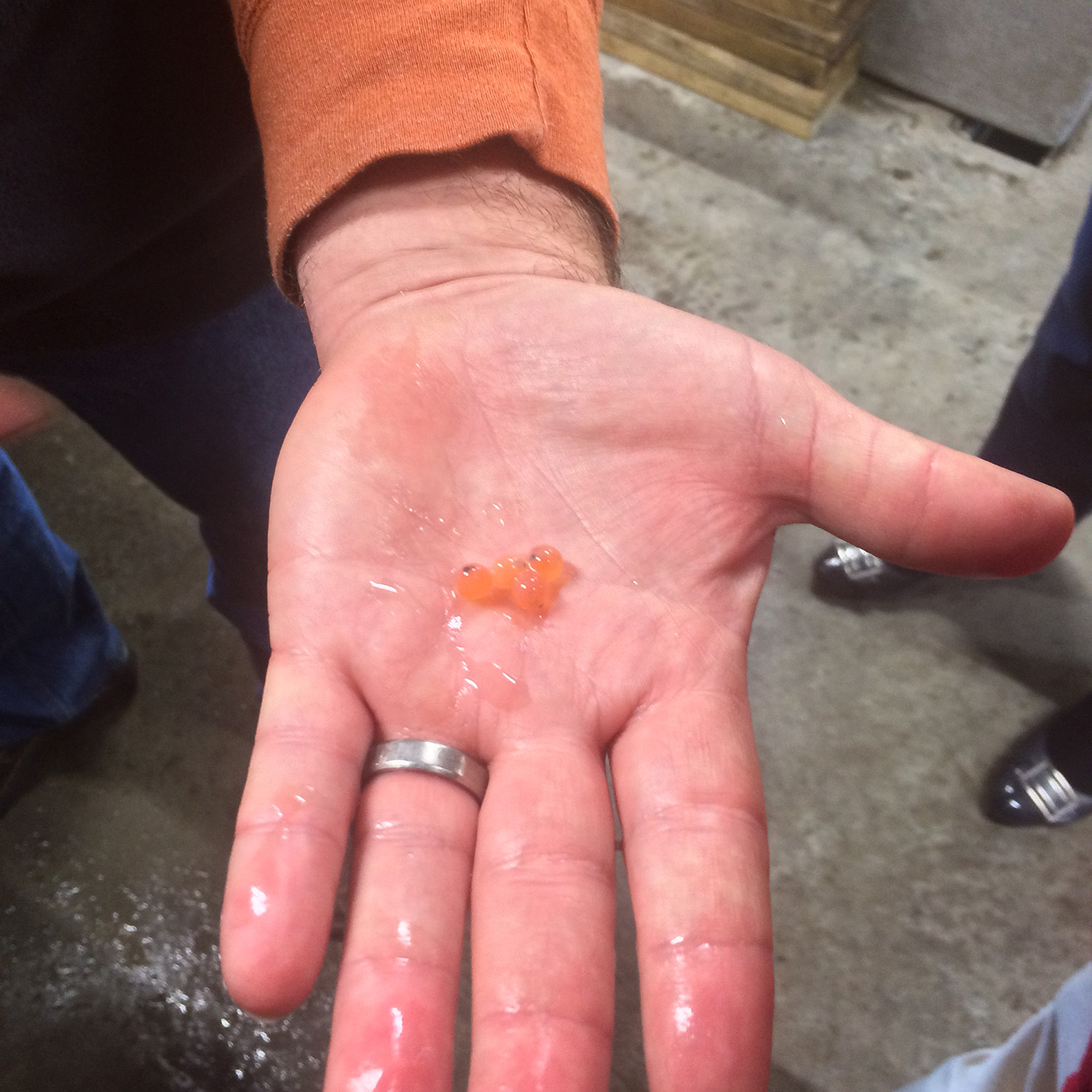 a handful of eyed-salmon eggs

Starting each fall, Kim helps third grade and older students learn about salmon life cycles and biology. Salmon are raised and studied from eggs to smolt to fry and eventually released in local watersheds in the spring. Once regularly stocked in some RI ponds, the focus now is on classroom education; that’s where kids learn to respect our resources and conservationists are born.

Typically, trout spawning begins in late fall. After approximately 50 days of post-spawn incubation, fry are transported to rectangular tanks and fed almost constantly for three months. Cold well water flows endlessly. They double in size each week. Once they’ve reached four inches, fish are moved outside to long cement tanks surrounded and covered by chain link fences where sheets of solar panels generate power and offer shade. Those panels keep temperature-changing snow out of the water while preventing predators like blackbirds who will squeeze through fence links and grab a healthy trout, only to pick out only its eyes. While a mink might occasionally breach the fence, they take but a single fish for dinner before retreating for the woods. 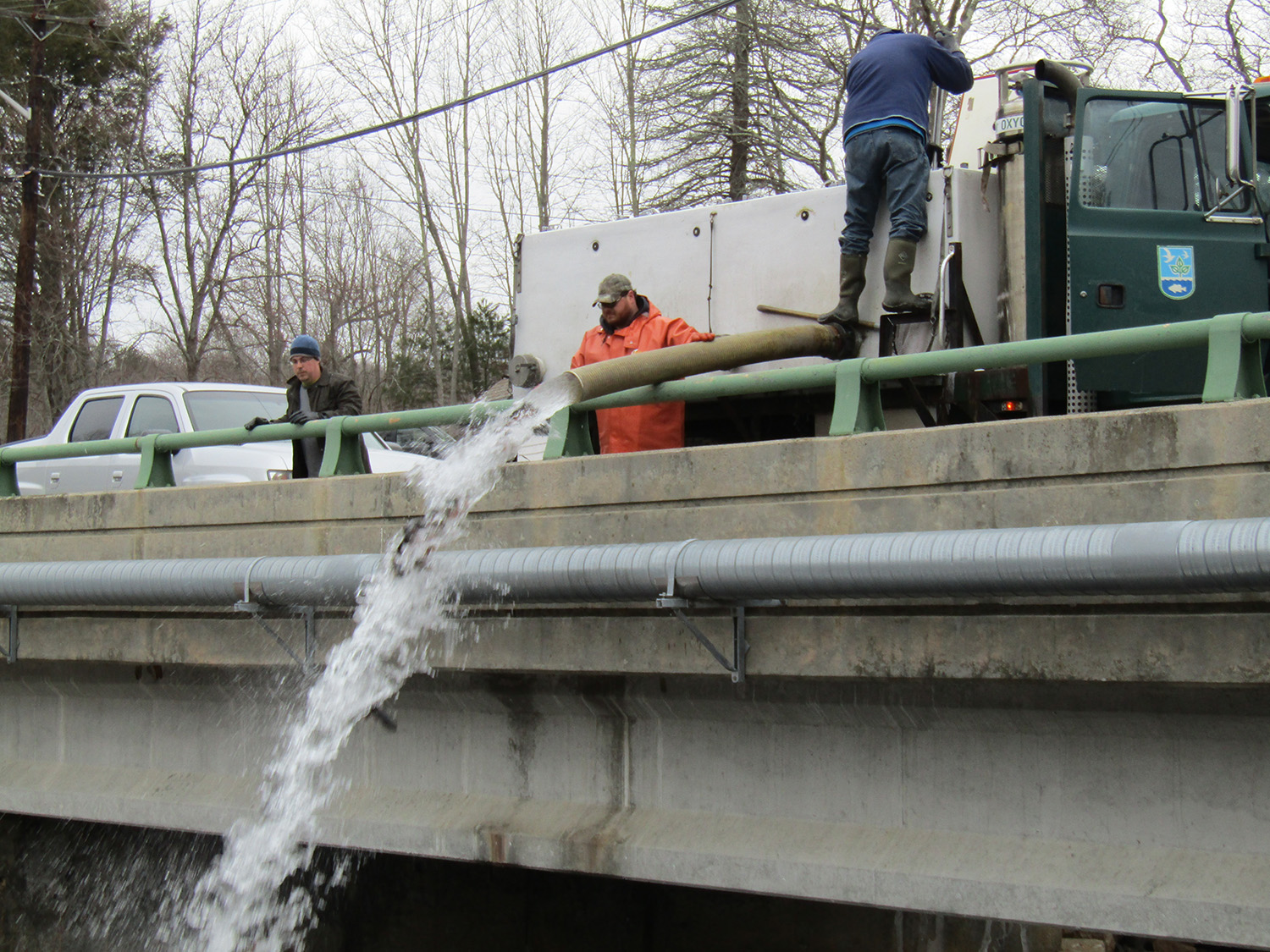 Trout live outside for eighteen to twenty-four months. On delivery day, they average 14 inches and about a pound and a quarter. They’re netted, counted and moved into boxes before being loaded into delivery trucks equipped with separate compartments for individual waterways. For those considering a head start on the season, RIDEM Law Enforcement gets the inside line on what’s stocked where to ensure we all fish with the same calendar.

“Something always happens, like the truck seems to break down,” Ken said about stocking fish on Mondays. His team has crossed that day off their calendars because they respect superstition. Historically, on Mondays, things go wrong, nothing feels right. Working in a world structured by the black and white of science while believing in a supernatural causality, a touch of grey so nonspecific as mistrusting a weekday, keeps things happily in balance.

“It’s a put and take fishery,” Ken said. Hatchery fish typically don’t survive long in wild waters; they’re raised with acknowledgment of this predicament. They contend with natural predation from other fish like northern pike, human fishing pressures and inevitable warming waters. Trout prefer temperatures between 45℉ and 60℉ but local ponds and lakes can rise to intolerable temperatures, especially in those brutal summer months.  There are arguments on both sides of the stocking debate and there is some real concern about stocking over native populations but there’s no denying that restocking has real social and some environmental benefits.To better plan your fishing trip, you can now call the Great Swamp Wildlife Management Area at (401) 789-7481 to get an update on where trout were stocked that day. You can tour the hatchery during regular business hours or contact them directly for a more close up look at 401-294-4662. You can also get a complete list of stocked water by checking out DEM’s website, www.dem.ri.gov.

Next time you reel in a fine 18” brookie or lean down to help a young fishermen bring in their fish, you have Ken and his team to thank for their years caring for and delivering some beautiful trout all over our state.

March 9, 2014 ©Todd Corayer 2014   Written back when we actually had ice... Good-bye ice, hello crocuses! At the tail end of a banner year for fishable ice, day and night soon find their balance so we can return to our canoes kayaks and outboards.  March for most is...
Keep Reading

Neresis limbata is wiggling its way through my patience

I hate cinder worms. They’re a fickle menace. They’re slimy, fleshy, wiggly segmented polychaetes who spend most of their lives working the mudflats of salt ponds and estuaries. Mother’s Day seems to be an annual coming out party as they leave the dark muck for late...
Keep Reading