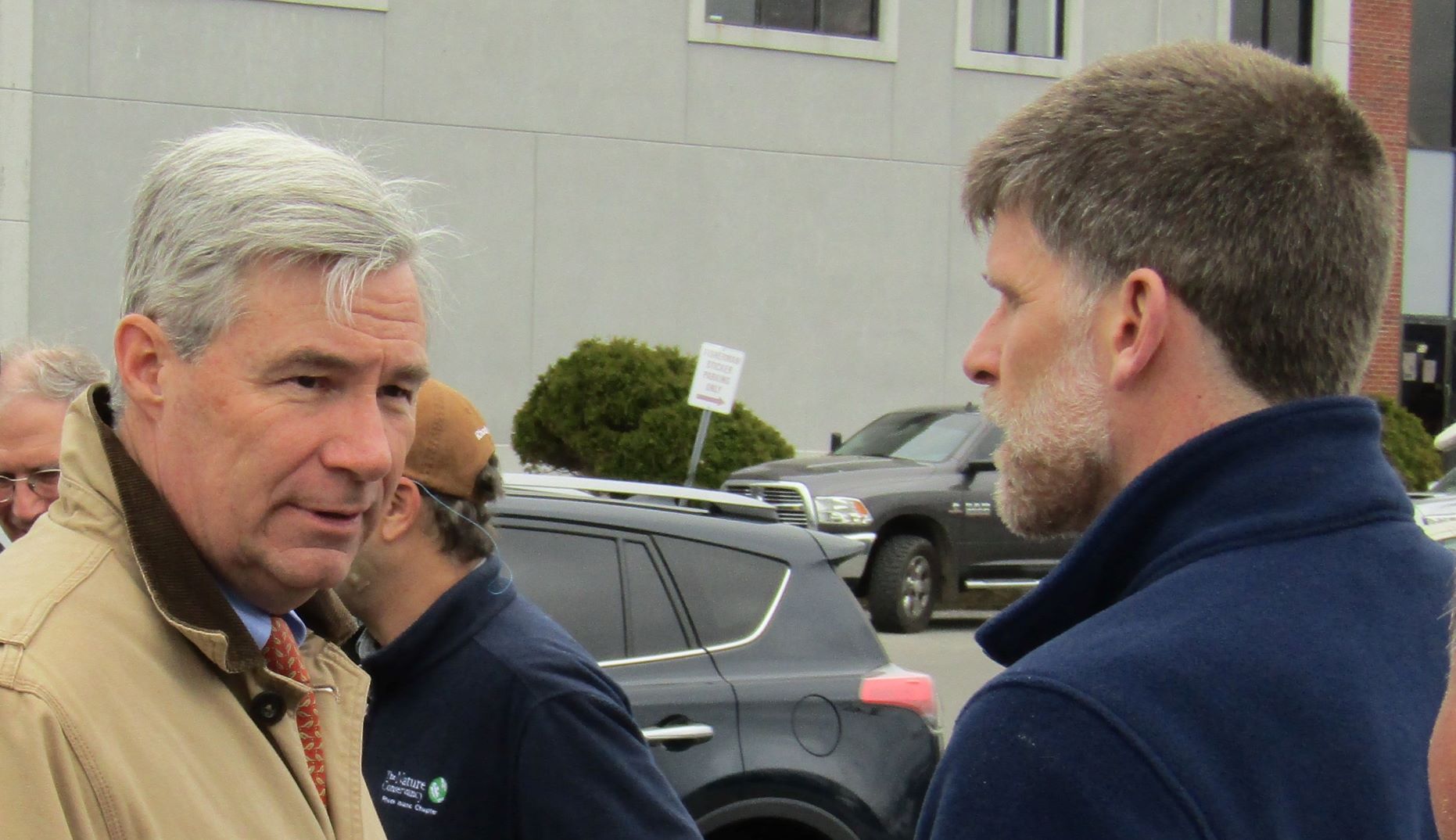 Steam over to the east side of Prudence Island, cast a live pogie, catch a striper. Head up to the Taunton River or the Tiverton Basin, cast a hunk of squid, catch a striper. Get in your kayak, paddle a salt pond or breachway, throw a DOA jig or an X-Rap, catch a striper. Work your way around the top of the Providence River, catch a striper. It’s not always that easy but this might be the best spring fishing in years and the best tip to find those fish might come by learning from a local fisherman.

But there are arguments to go with each need. Unlike the selfish plattors over in Westerly’s unPleasant View, whose view is more pleasant without anyone in it, and are hell bent to keep us away from “their beach”, this week we’re interested in better people sharing access to fishing spots, fish caught and fish returned. 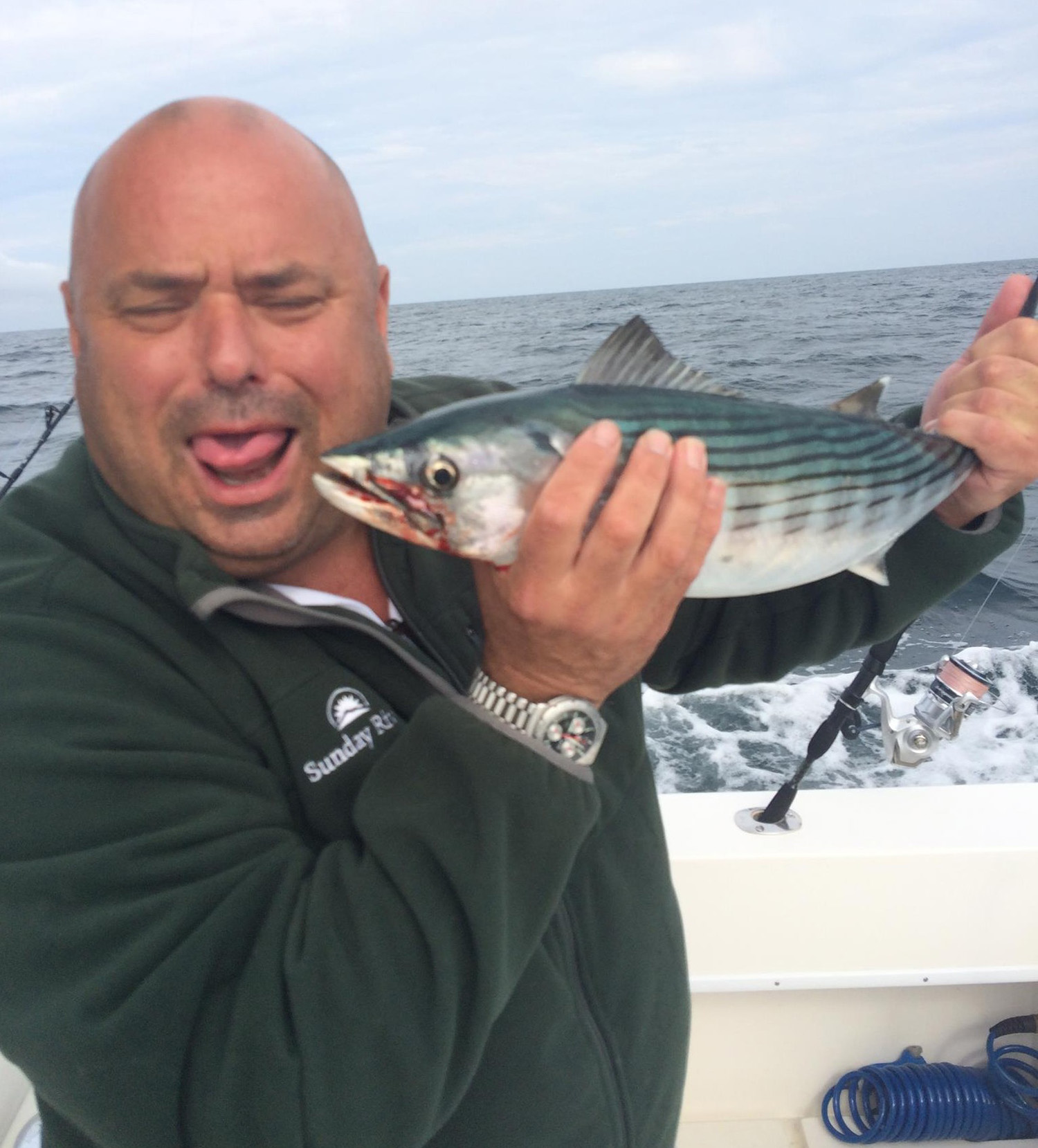 David Henault at Ocean State Tackle has taken some heat for sharing fish reports on his social media sites. Chris McGuire, Marine Program Director for The Nature Conservancy, is helping commercial fishing boats report more accurate landing and discard numbers. Both have an agenda of communication and improvement to the different fisheries. Both are worth your time to listen to their words and advice.

Dave posts regularly about who’s catching what where, often with information about best bait or lures. He runs a busy tackle store, he sells bait, he fishes like a fiend, he lives a big life. Thousands of people follow him on different platforms because he’s a wealth of information, not to mention a total character. Surely some have time to cruise the bays, beaches and bottoms to find fish feeding but many more rely on reports for a head start.

Part of the argument is that as soon as someone out on a hot spot or someone like Henault or Captain Dave Monti, who writes excellent reports covering recreational and commercial fishing as well as state and federal regulations, posts a report, it’s the end of the world for that spot. Center consoles will race from points unknown to catch every fish, kayaks will slink in under cover of darkness to take the biggest shallow water stripers, every last fish will be removed or scared back to the canyons. And don’t even think of posting reports about tuna fishing as apparently that’s way off limits, according to some short-tempered seasonal anglers. 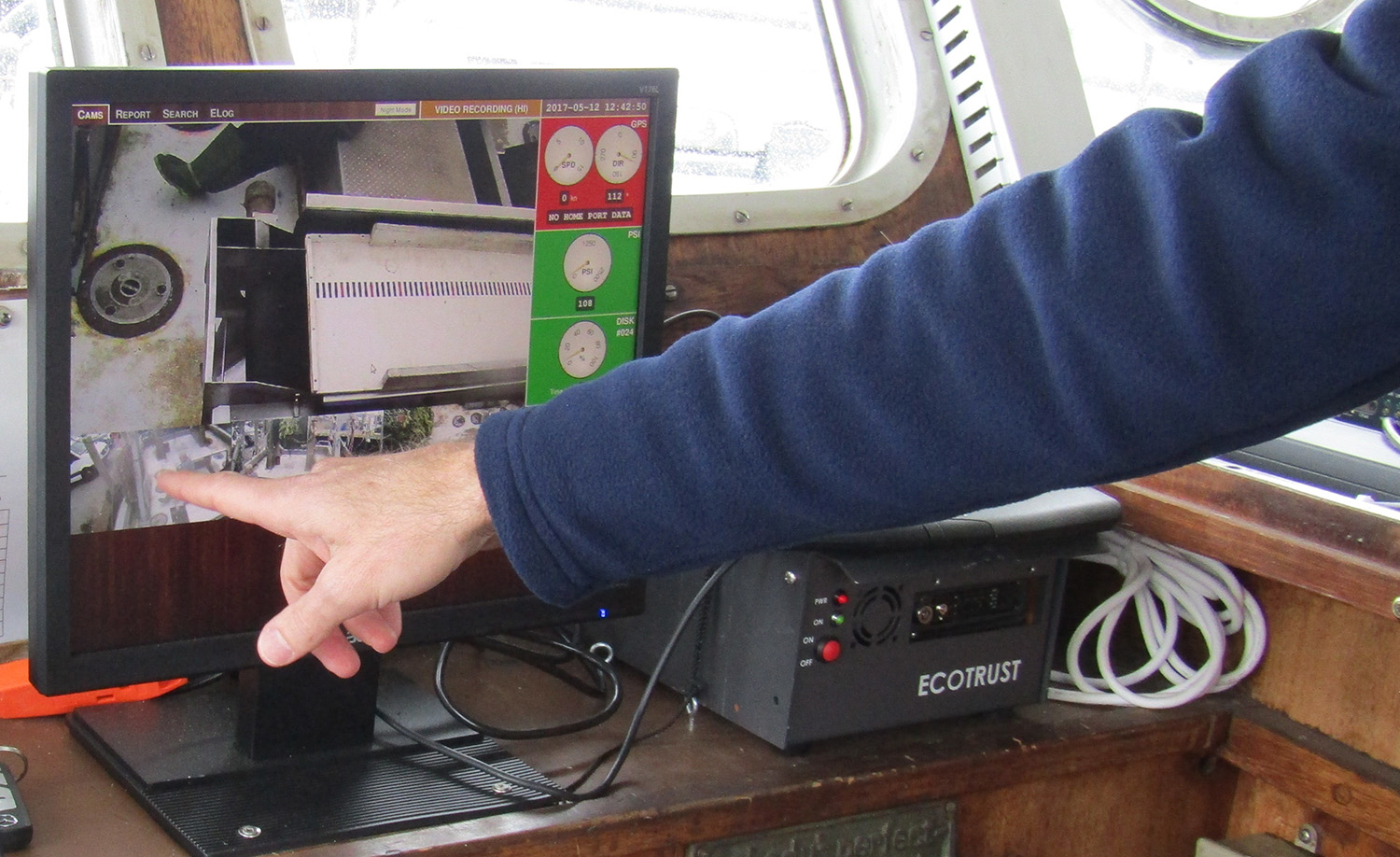 cameras in the rigging show work and fish on deck

Chris and The Conservancy has facilitated funding to install cameras on 14 commercial boats for capturing images and data.

“Fishing is not a right, it’s a privilege,”

From the culling board video, observers on land can determine species and size, which eventually will help make fisheries policy more accurate and timely. Chris Brown, captain of the Galilee based F/V Proud Mary, offered his boat to test the technology. “Fishing is not a right, it’s a privilege,” he said, adding “I want to be part of the solution.” 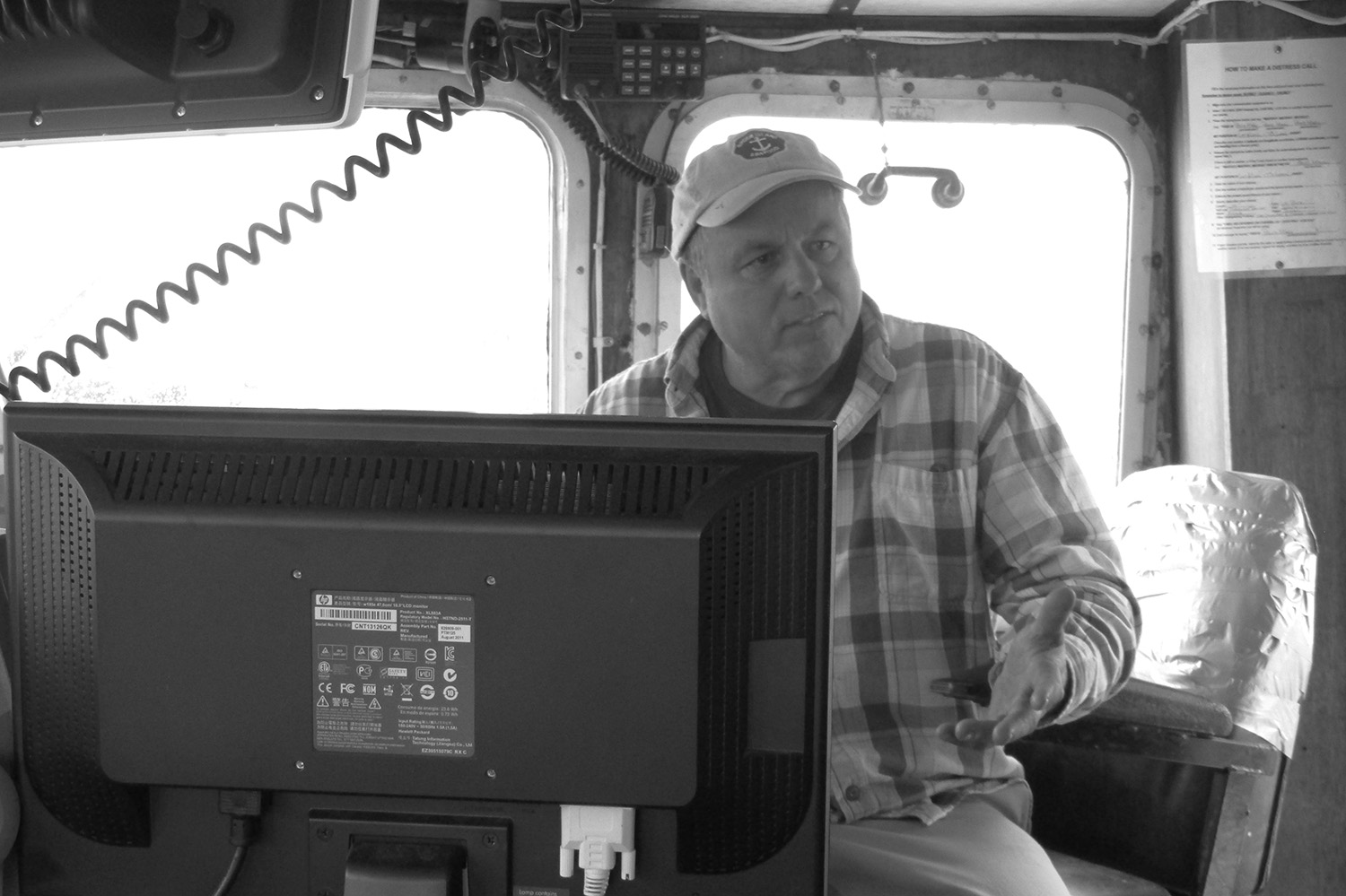 There’s a parallel with The Conservancy’s work, the unPleasant View folks and those angry about live-time reports. Read through any fishing magazine, notice how often references are made to “our fish”, “our beaches” or “commercial guys are catching all our insert-fish-here.”

We have a possession issue when it comes to resources and access; I say it’s not “our ocean”, it’s “the ocean”.

Not everyone is happy about cameras on boats. Having spent a few years out there, my initial thought was commercial boats are hallmarks of independence, run and worked by fishermen who don’t typically want or enjoy public scrutiny. One fisherman I met thought this pilot project opens the door to mandatory cameras on all boats, and worse, that fishermen will be required to pay for them. Chris McGuire does see this as the probable path, saying, “We’re going down that track,” but technology breeds efficiency which ultimately lowers costs.

Nothing is what it used to be: commercial fishing is more complex than ever, cameras are cheaper than human on-board observers, online reports are instant. The main goal is to preserve and protect our, sorry, the fisheries as we better understand how they are intertwined and interdependent. 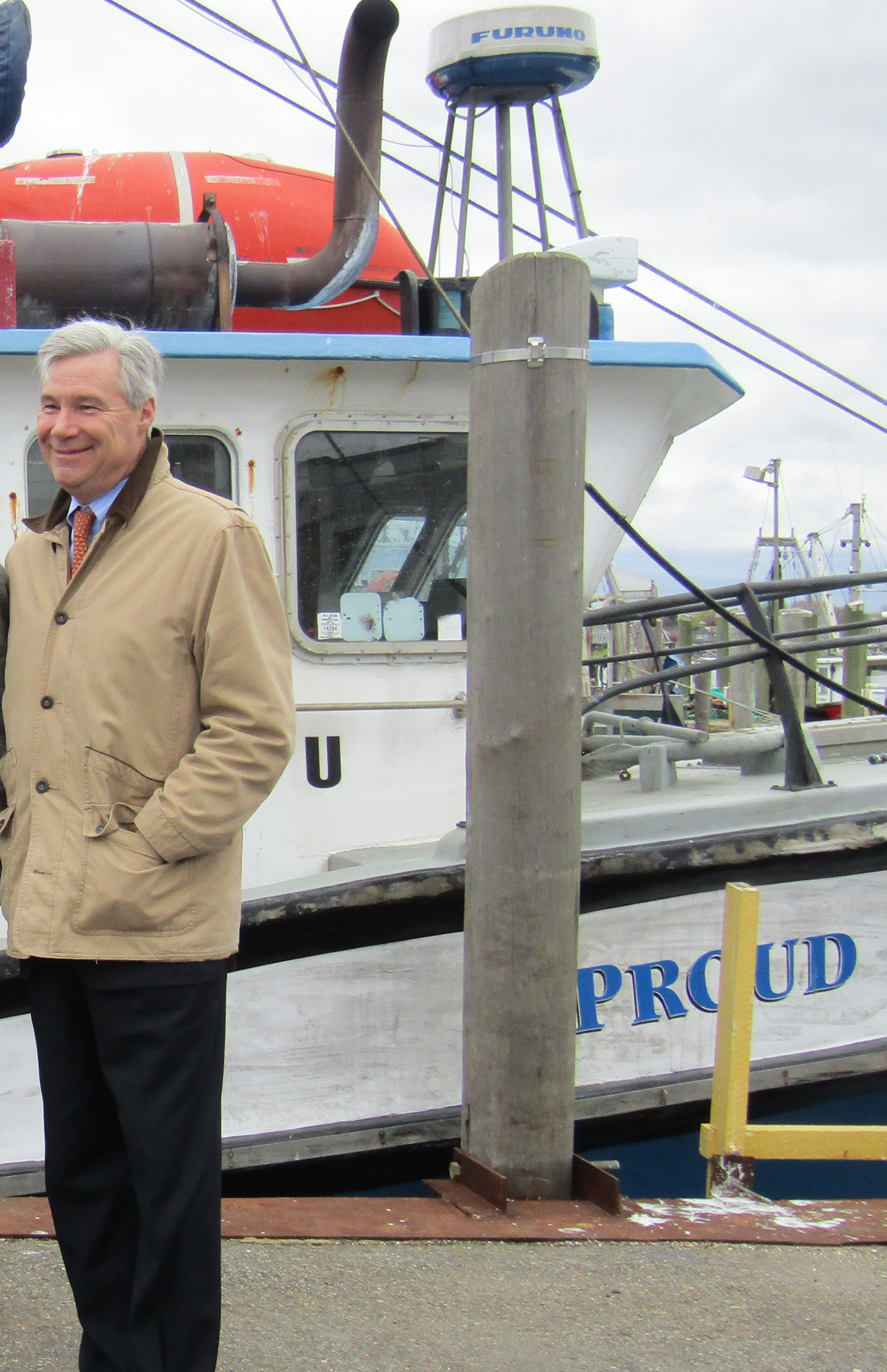 Sen. Whitehouse in front of the FV Proud Mary

My logical argument is that most reports aren’t all that revealing. We’re New Englanders, we know East is the least, a Southeast wind blows itself out after 12 hours, we know bluefish are near by the smell of watermelon in the air. The Connecticut guy with the dented aluminum camper, with more rod holders that ten men might ever need, with the spotless cooler bolted to the front bumper, well that guy might benefit from knowing there are schoolies inside of the Charlestown Breachway and a few keepers out on the end where the weird rotation happens and the whole joint smells like Camel straights. The rest of us should know that when there’s thirty, five-gallon buckets lining the Great Island bridge, when shad trees bloom on Block Island (and for Lord’s sake can people stop calling it “Block”?), when Dave Monti tells you pogies are all over the upper Bay, when you look through the windshield wipers and realize it’s May, when you start seeing orange life jackets flying out of Whalers being trailered for the first time, the bass are here.

It’s not a spot burn to say that stripers feed on the east side of Prudence, it’s common sense.

While some hemorrhage money to keep you out, The Nature Conservancy is paying to better understand what fishermen bring in, what goes overboard and what species are migrating at certain times. That’s information that helps all of us on all sorts of levels. Dave Henault reports what he sees, Captain Monti writes excellent reports, all of which helps us catch fish. With a new and welcome focus on Catch/Grin/Release®, it’s not going to matter who fishes where because with accurate data, accurate reports and responsible fishermen focused on the fisheries, abundance will only build.