The big fishing news is that Cape Cod fisherman Jeff Fortin outlasted a 64.6 pound striper in Buzzards Bay. It’s a seriously impressive fish. So early in the season, it’s hopefully a good sign that fish of such size have already moved in to feed on pogies and herring. Fooled by a white paddle tail shad imitation on thirty pound test braid, the lucky crew promised it was exhausted by the time they hauled it in, which took about 13 minutes and that she never would have survived a return. Cheers to Jeff and crew; she’ll feed a lot of friends and likely end up on his wall as a giant reminder of what’s shaping up to be a hell of a fishing season.

Closer to home, stripers continue to be caught all over the upper Narragansett Bay and northern river mouths. Live pogies are still the magic bait. Upper reaches, like Poppasquash Point and over to Bristol, the Hurricane Barrier, the Gano Street boat ramp and up towards Festival Pier in Pawtucket have been producing bass. Both sides of Jamestown fishermen are catching bass from schoolies to thirty-pound class fish. Smaller fish continue to be caught along the south facing beaches but for now, it looks like the big girls really headed up the bay and will stay there until the bait runs dry.

With plenty of squid in the bay heading for the south coast, fluke fishing should improve.

Elisa at Snug Harbor Marina reported that fluke meeting the new 19” minimum size are being found just south of Block Island and a few are being caught in the Bay as well. She also mentioned a few cod being landed through the dogfish and choggies, which are also members of the grouper family, like black sea bass.

The recreational black sea bass season starts on May 25 and runs until August 31 with a minimum size of 15” and a three fish limit, then continues until September 21 at seven fish per day. The commercial striped bass season opened Sunday, May 28 and runs until December 31 with the exception of September 1 through September 8 and the fishery is closed on Fridays and Saturdays all season. 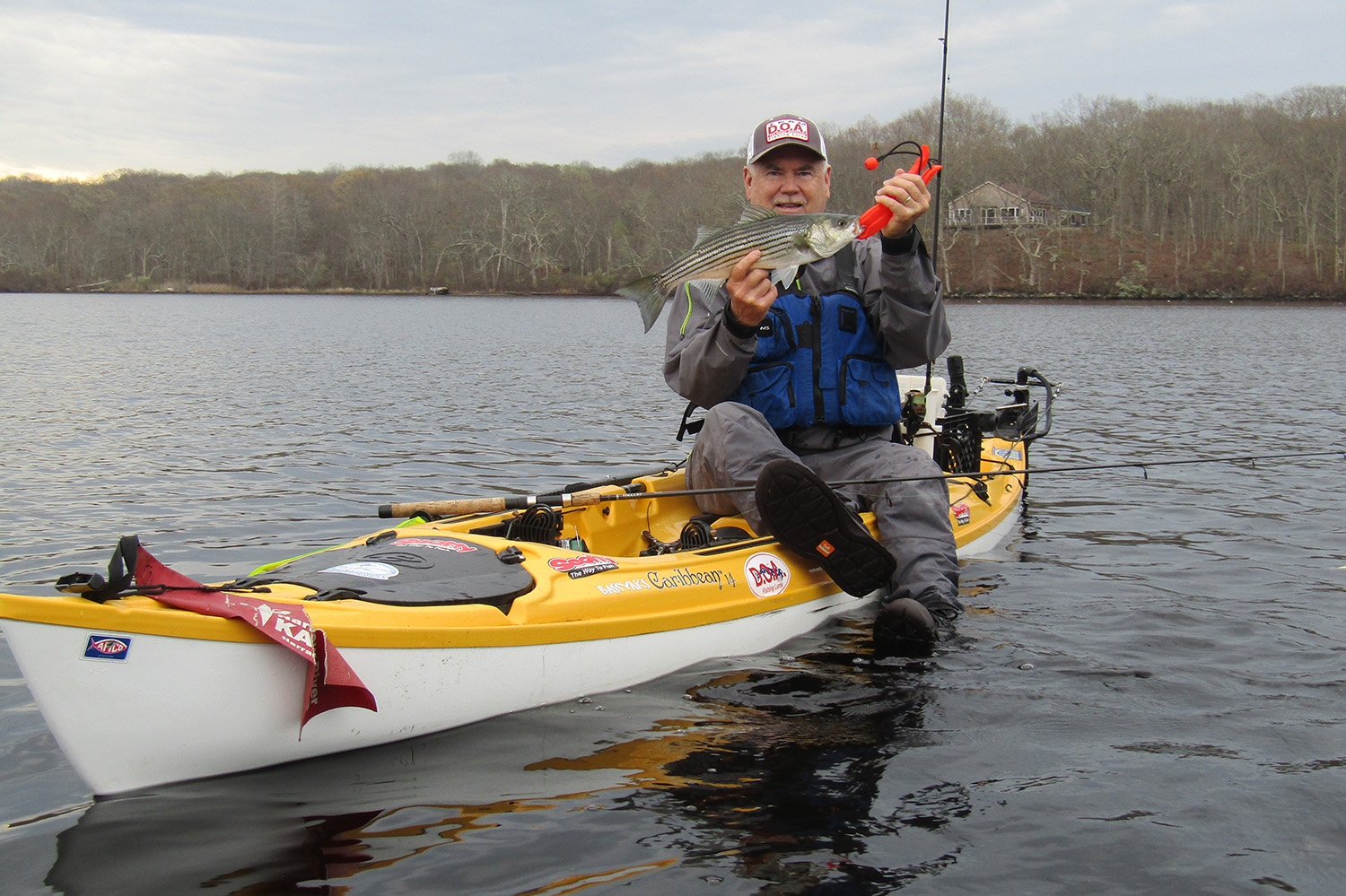 Captain Jerry Sparks of Northeast Boat and Kayak Fishing Charters reported plenty of fish in South County salt ponds. On a recent charter his sport pulled in a fourteen pound bluefish which really shows how blues are moving in shallow. A bluefish of similar size was landed on Narragansett Town Beach last week so there’s no doubt workbenches and boat decks will soon be littered with half-eaten soft baits. Captain Sparks said he’s had good luck in the Connecticut River, mostly on top water baits like MirrOlure’s C-Eye Poppa Mullet. When the fish are deeper, he said, “We’ve been throwing big plugs like spooks and the new Rapala Skitter V.”

The much anticipated cinder worm hatch has begun with a soft opening. It’s really a spawning event, not really a hatch, but “worm hatch” sounds better over a beer than, “the mass spawning event.” Ninigret had a big showing of worms but no fish but then just a few days later, worms and stripers were all over the ponds with one report of a two in the afternoon circus. 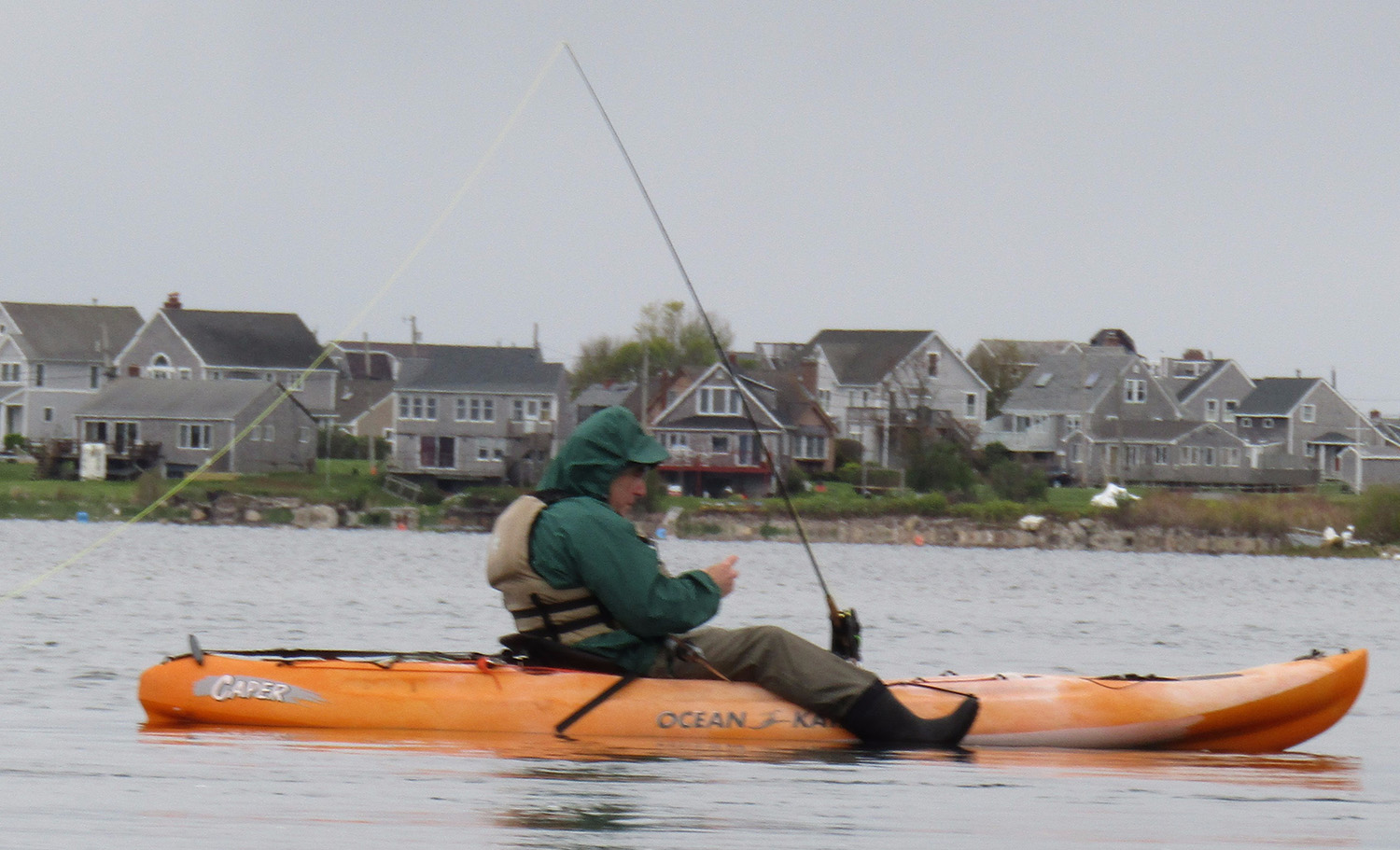 Preferred water temperature is in the mid-sixties and they are very temperature-sensitive, which adds to the frustration of timing your fishing to their spawning. Technically known as Nersis genus, they survive in the mud until a new moon calls them to the surface. During those fleeting hours, their rear end, called an epitoke, grows a paddle-like tail to afford them propulsion. That surface dance is a result of them trying to shimmy and shake their epitoke to release sperm and eggs so the circle can be completed. Fly fishermen often look for rippled water to strip tiny red flies along the surface to imitate that dance. If it ever stops raining, pond waters may warm enough to for worms to get busy. 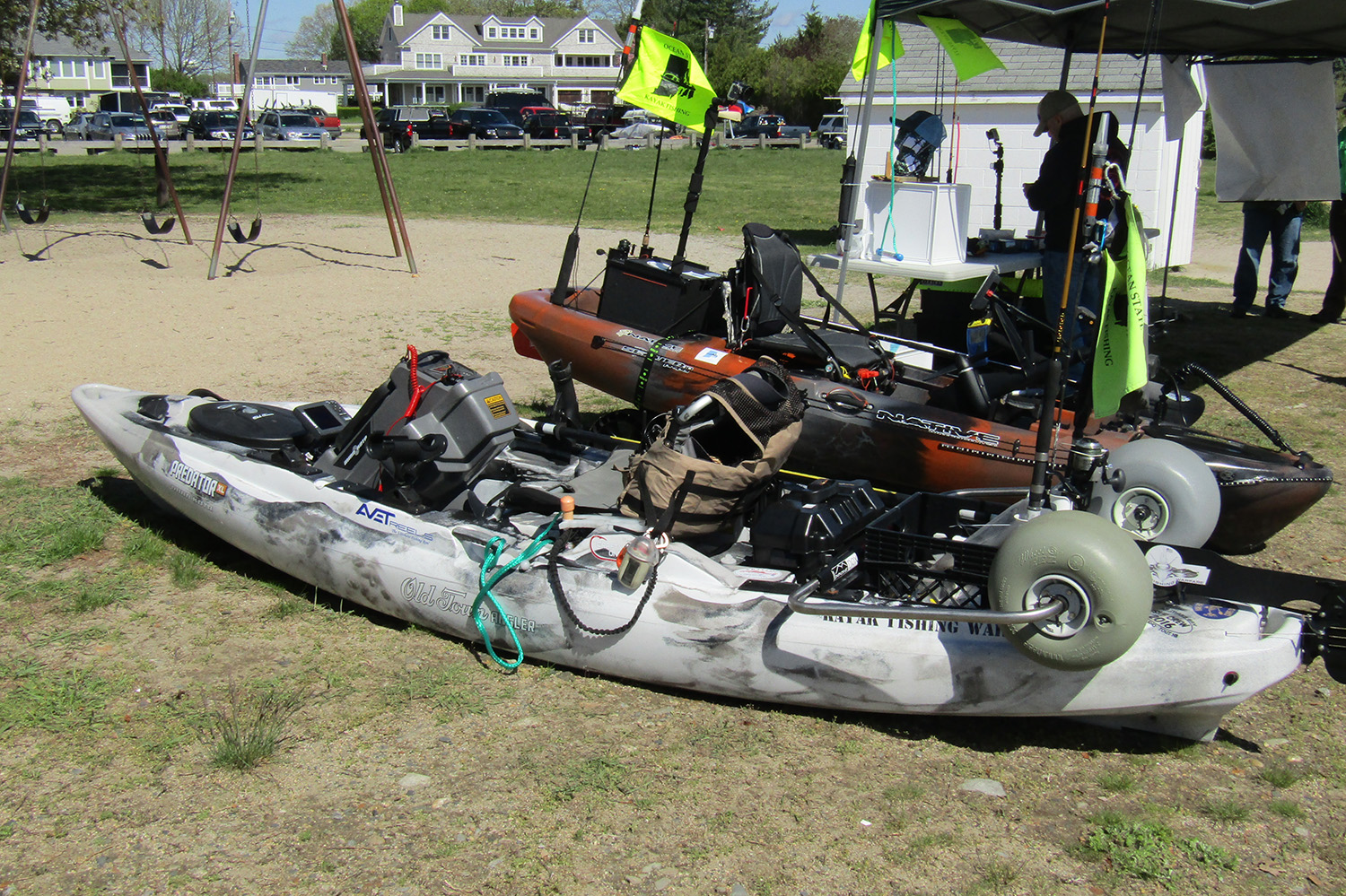 Two days in, there were reports of some nice fluke and Brian Hall was holding down third place in the Electric Division. Almost immediately, unplanned but expected offerings were made to the fish gods. Some ill-placed equipment went bouncing down the road, there were reports of highliner Jimmy Chappel being mugged and left bloodied by a belligerent bluefish while another exacted some revenge for Brian Hall’s success by tail slapping him then stealing away with a sweet rod reel combo from the side of his yak. Fishing can be expensive and New Yawk can be a tough town; no word yet if The Jets or Sharks were behind any of this piracy.

Up on the other hill, Representative Lauren Carson (D), Newport, has introduced a

bill recommending that city planners be trained in the very real issue of rising sea levels, which can no longer be found on the EPA website because apparently it’s a big hoax. It calls for two hours of training every two years and passed with a vote of 59-10. Some dissenting Republicans thought people shouldn’t be forced to take training and that it would be of no use to planners away from the coast.
That’s the point: if we keep calling it a hoax and kick the can down the beach, it will be an issue for all of us regardless of where we live.
Across the swamp, the Senate has approved Sen. Fogarty’s legislation, supported by Save the Lakes, to create coordinator position at DEM to help oversee freshwater streams, rivers lakes and ponds. Now it’s off to the House for discussion.

Finally, the fishing port of Galilee has ten new interpretive signs to help visitors understand the port, how important it is to our economy and identity and even what fishing boats catch. Local artist Jon Campbell, fisherman Rodman Sykes and RIDEM’s Janet Coit were among those gathered to unveil the work of Sarah Schumann and others who designed and installed the signs throughout the harbor. Well done.