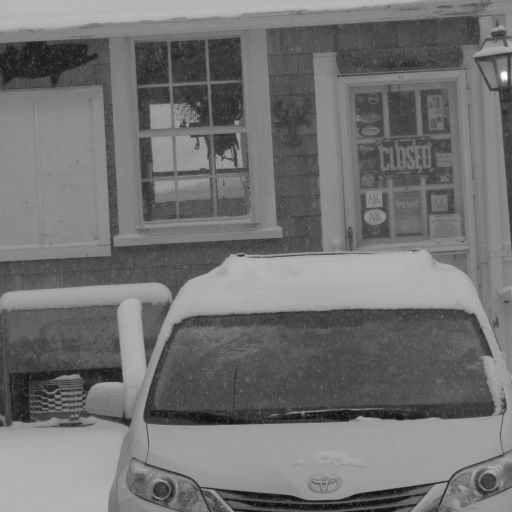 Winter, No One and Block Island

No one was there, at so many Block Island spots. No one looked up from much of anywhere. No one on the island was catching or digging. No one kept their head down, praying while playing a big bass until a car with yellow plates passed. No one stood out in the cold to see acres of sea smoke. It was Block Island winter peace and no one was there. 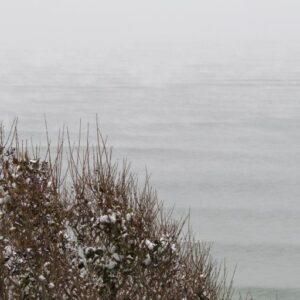 Confucius gave us, “Everything has beauty, but not everyone sees it.”

No one walked any flats either side of Beach Avenue, where ebbs then flows have smoothed sharp black sand elbows. Exposed stretches had tightened up after short, low sun days and bitter nights. Hard clams were deep. Burrowed crabs stayed warm beneath seawater sheets changed twice daily.  No one pulled frozen strings to tend their minnow traps, barely anchored in narrow strips of streams fresh and salt. 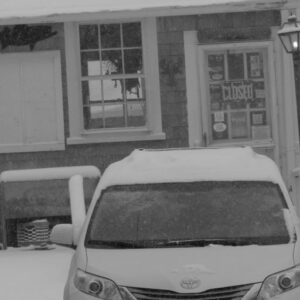 No one home at Twin Maples

No one sat on summer docks, now hauled and stacked on brittle grass, freckled with barnacles gaping a final time from planks turned grey by salt and sun. No one leaned against Twin Maples’ windows to see fishing poles stored overhead on pine rafters or Eat Fish t-shirts neatly folded as frost gathered on one inside window corner and snow capped both outside. The tide chart case was empty, a fading sign said Closed while a red lobster remained, guarding the door.  Hopefully, Mackie Swienton’s a.m. radio also remained, behind the old counter, a small yet important reminder of a very fine man.

Across the street, nobody saw Geoff Hall carefully shoveling snow off a 12 pitch frozen plywood roof except for Alan McKay, who walked alone on the first floor betwixt studded walls, past holes square-cut for Harbor Pond views, considering how to pick up where Norris Pike put down his hammer and pencil, sadly and far too soon. 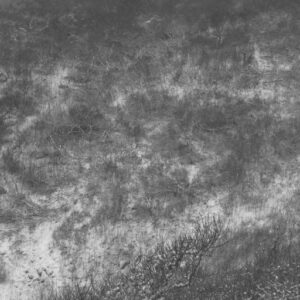 No one was at Settlers Rock, looking or casting north, squinting into afternoon shadows stretched over boulders where stripers hunt in most months but these. Fish, big fish, fish of tall tales encircle such structure where small fish have no chance, where surf casters throw darters and Danny’s to draw them closer. No one was unbuckling sandy cleats, leaning on the stone set for 1661 when early immigrants prodded ashore the island’s first cow. Not even one person searched for sea glass along the beach where an 1846 shipwreck breached her holds of coal, to be picked up and brought home to the demise of peat, despite there being no stoves yet to accommodate its particular burn. 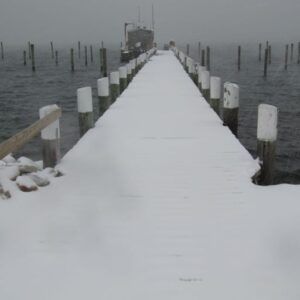 No prints, no docks, no boats

No one left one snowy footprint at the Boat Basin dock where wind blew in all directions and back again, leaving ice sometimes on frozen piers. Small waves battered ladders worn from children of all ages hauling in green crabs and white squid for warm evening entertainment and dinner. No docks were busy, there were no boats in sight.

No one saw a red blinking light, channel marking New Harbor for lost sailors and Camel smoking fishermen finally, gladly steaming home. On a small rocky stretch to the north and a bit east off Hippocampus, there were no strings of lobster gear or vertical buoy lines sharp and spliced with fluke rigs cut off from recreational fishing frustration. Those traps were stacked tightly now behind sheds and barns, punctured with buoys awaiting Spring colors.

Nobody turned from the wind to walk a long beach past the Coast Guard boat house where that same wind had cleared sands of fish and men. There were no towels, coolers or flimsy webbed chairs, no prints north or south from bare feet or booted waders, no evidence of seaweed line tug of war battles fought with monofilament or stumbles close to a quick deep edge or victories planned while coercing a strong fish to come ashore.

No creaking was heard at the Mohegan Bluffs stairs, no deer grubbed through snow for food alongside. 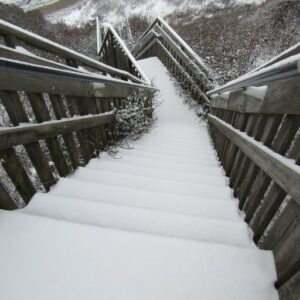 Far below, flushed by summer heat, stripers will linger between mossy boulders of incalculable weight, some of both visible only with a rare perfect moon. Bluefish will tear through slow rollers, slashing bay anchovies and peanut bunker, their oily sheen tinting humid air with wisps of watermelon only the wisest salt might detect. Several it seemed, were the additional steps on an upward climb. Block Island winter peace indeed.

Peace, Quiet, and Wisdom Gained On A Sleepy Island 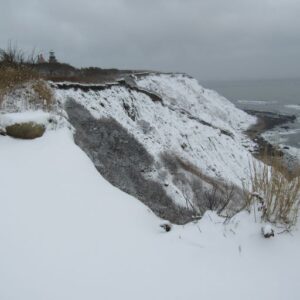 The overlook, with a lighthouse to the east and one far to the west also was empty now but busy earlier, with does and bucks nibbling sparse greens, sparing ample reserves of bright winter berries.

No seals were sinking that last floating dock in Cormorant Cove because there were neither. Cleared by low tides, surrounding sands still wore last season’s tans except where December brushed and blew them white. No tire tracks parted ruts of mud, preserving evidence of fishing The Church at Southwest Point. Only deer braved such a steep hike down to a stony beach, where Fall stripers parallel the points. All the rocks were black.  Sea water was chunky with rough circles of ice. Everything glistened.

One day, Spring will return to brighten everything beneath us, above us, all around us. Hard North winds will ease to southerly breezes, stone walls will again be consumed by bayberry, Great Salt Pond flats will be warm and dotted with bare and webbed foot prints. Striped bass will lurk along Pots and Kettles, patrol a tide change at The Church and rest near Grace’s Cove in eddies a few rods beyond our reach. Soon, some of those breezes will hint of watermelon, someone will step over old black coal to continue a battle, docks will creak from the weight of children instead of cold. Everything has beauty indeed and it’s there to see when we look closely, especially in winter, searching for Block Island winter peace. 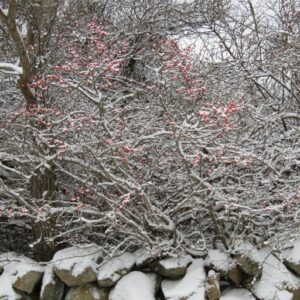 Red, white, stone, brush. Forage for another month of winter.

Josh Miller knows fish, he hunts, he dreams of packing up a trailer and hauling himself back to Alaska, back to where everything is big and wide and open, where people live off the land and there are options for a smart guy. He also knows how to catch fish. Big ones.

When four anglers talk water and see a river’s future, it’s to protect what we have neglected; their timing could not be better for trout. Meet Trout Unlimited, RIDEM, Protect RI Brook Trout and the Flat River.