So it is, the end of another year and we’ve been so fortunate to report on people searching for and catching fish, people protecting resources and people who were just straight away characters. 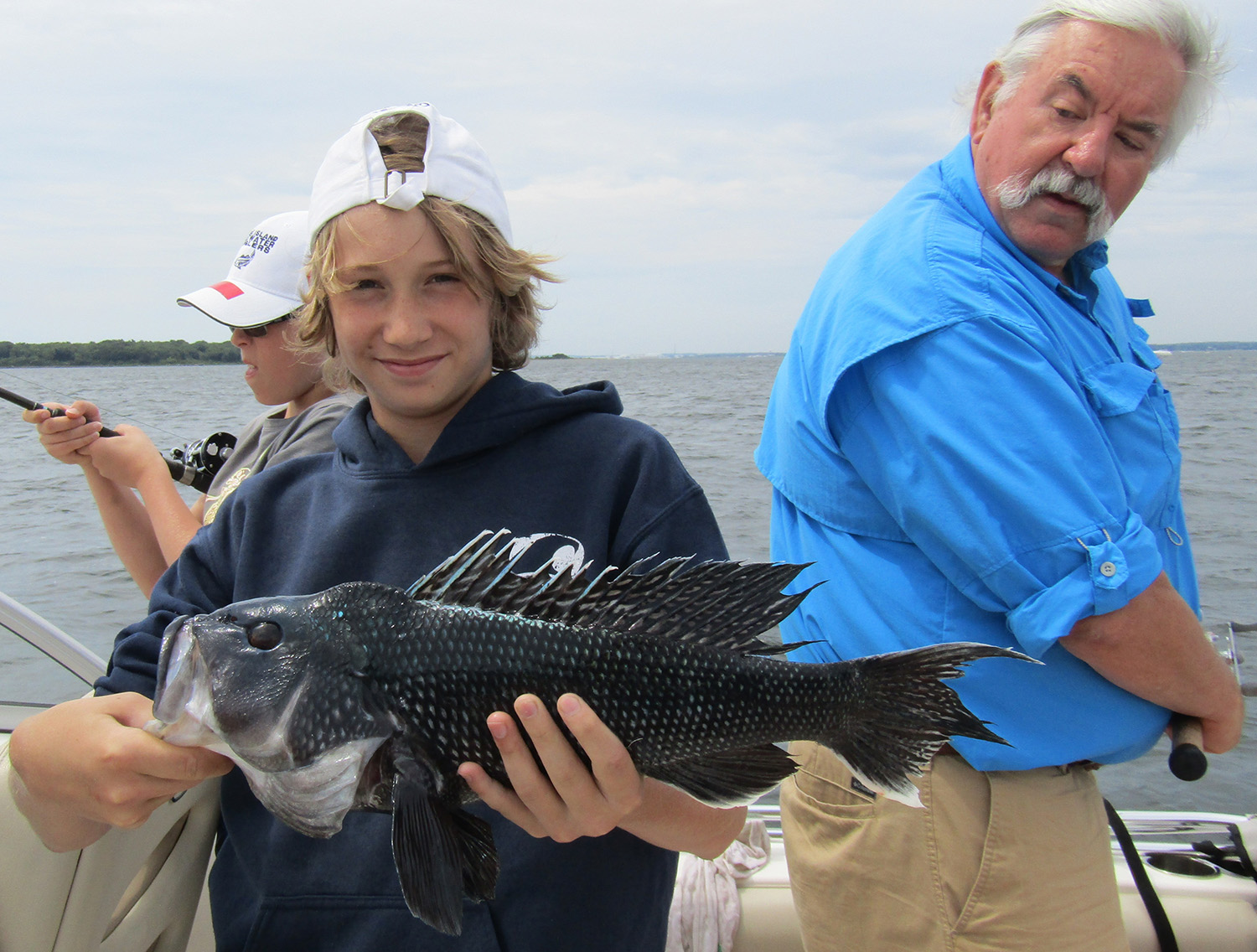 We started by meeting Mike Lee, proud new owner of Al’s Goldfish Lure Company, the perfect lure that’s likely caught a million trout. Mike’s added his Saltwater Series to his tackle box and from my hours swinging it through some salt ponds, it’s a serious fish finder. Later we made a few awful trips to the registry, trying our best to register a simple boat trailer. By the end of the Trailer Trash saga, we found resolution, after a disturbingly torturous episode with DMV worker who could only repeat, “There’s nothing I can do for you,” with the most wonderful Lisa Egan who made everything right and even, a little fun. Cheers to you, Lisa.

Just prior to opening day of trout season, we met RIDEM biologist Ken Fernstrom who has spent 18 years raising fish and this year, he cared for 200,000 rainbows, 48,000 brookies, 50,00 brown trout and 40,000 salmon at North Kingstown’s Lafayette Fish Hatchery. We met Walter Eddy at the Carolina Trout Hatchery where he’s been since 1955. 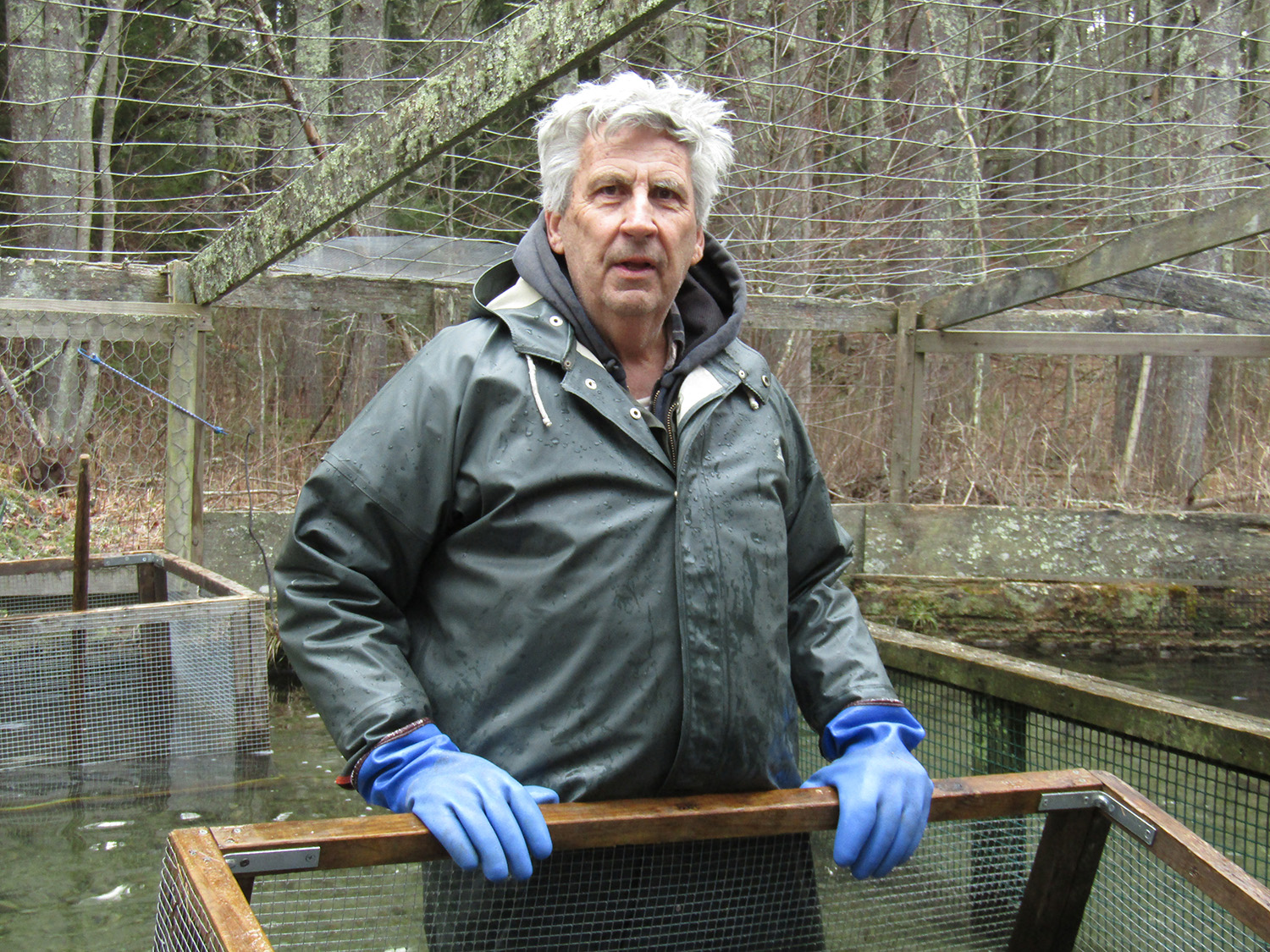 “I started working here when I was 14,” he said. “I started part-time, never left.” Standing in icy raceway water, topped with a wonderful shock of silver hair, he stood seemingly unaware of 18” rainbows gliding between his feet..

We visited the Narragansett Surfcasters for their annual Used Tackle Sale. A favorite scene was a fisherman working to get a new surf rod into his four door. Window up, then down a little, seat folded far back, then up with the window just down up enough to not break off the tip, just enough to keep out freezing air. We’re a little out of practice after a few months of cold water.

We hung out with expert rod builder Harold Reed, author and storyteller Dennis Zambrotta, The Bear’s Den Scott Wessels and heard from Matt Toker about his Facebook page, 401 Fishing and his encouraging people to pick up more trash. 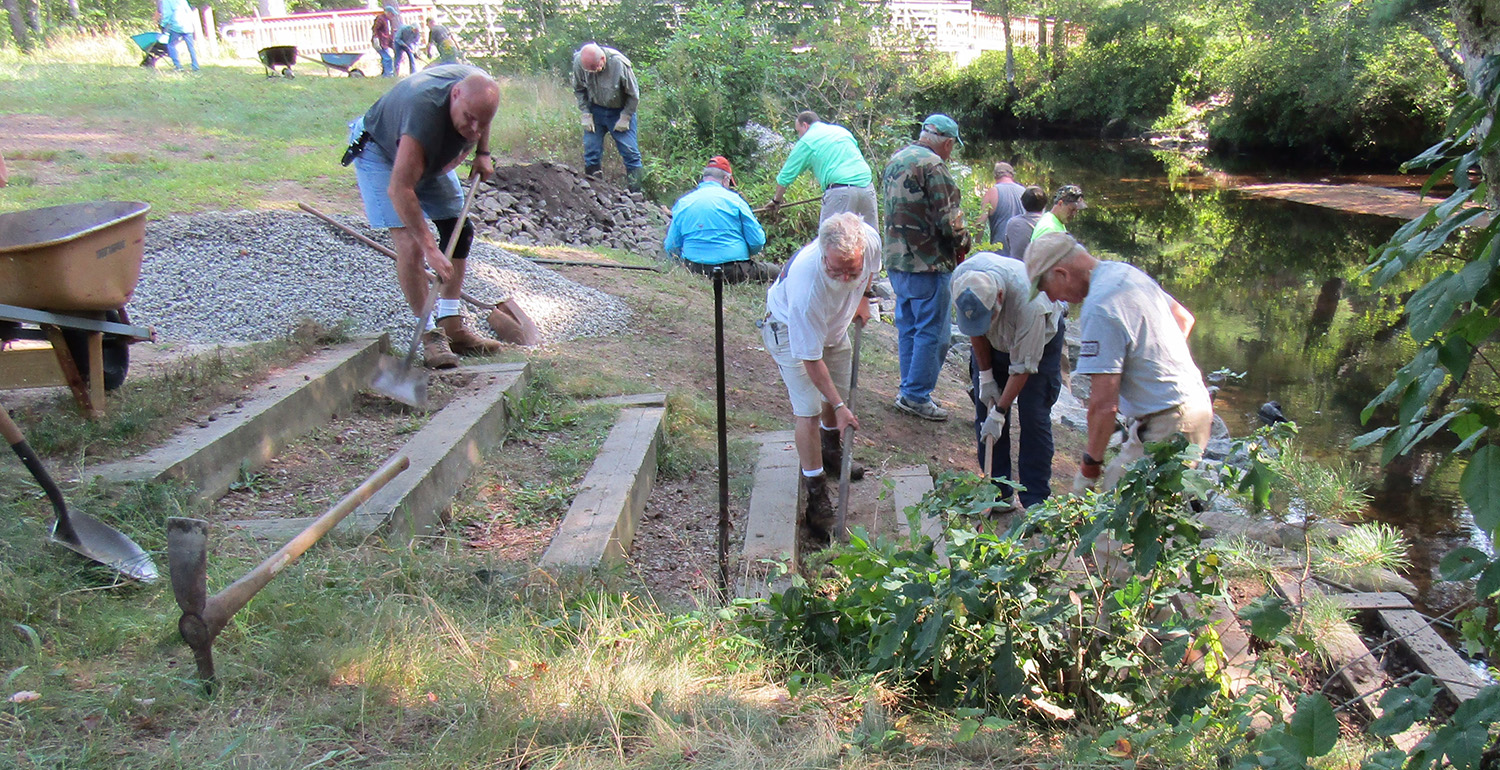 Bonnie Combs kept us up to speed on The Blackstone River and her super cool recycled grain bags while Dave Henault of Ocean State Tackle advised us on bait, lures and Southeast Asian cuisine.

They are two serious characters. We met Ronnie Lippe, a most careful carp fisherman who landed his then-personal best common carp at 31 pounds and photographer Markham Starr whose wonderful documentary, “Rhode Island Trap Fishermen” offered us a glimpse of the way fishing was an still is for some.

The Natural History Survey’s Dr. Peter Gregg introduced the National Marine Fisheries Service’s Dr. Gary Shepard for a talk about black sea bass. “You very much are the Natural History Survey, ” Dr. Gregg told the room of attendees, including his Program Administrator, the amazing Kira Stillwell. The Survey is a wonderful and absolutely vital conduit between people blessed with knowledge on a myriad of natural subjects and those amateur naturalists who want to learn more. 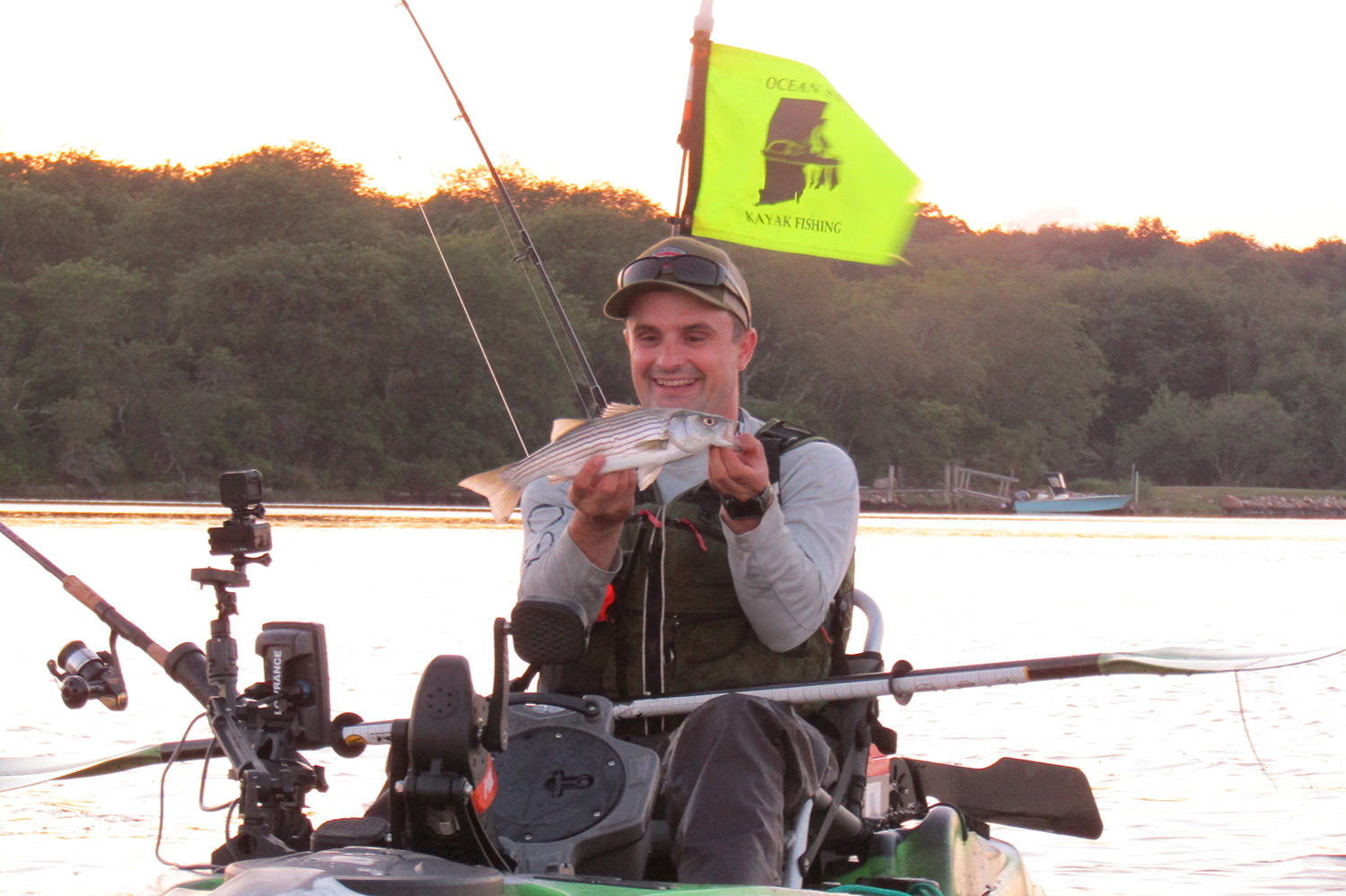 Jimmy Chappel introduced us to the Ocean State Kayak Fishing Facebook group and many of new members. His introduction led to meeting Brian Hall who would appear here throughout the year. 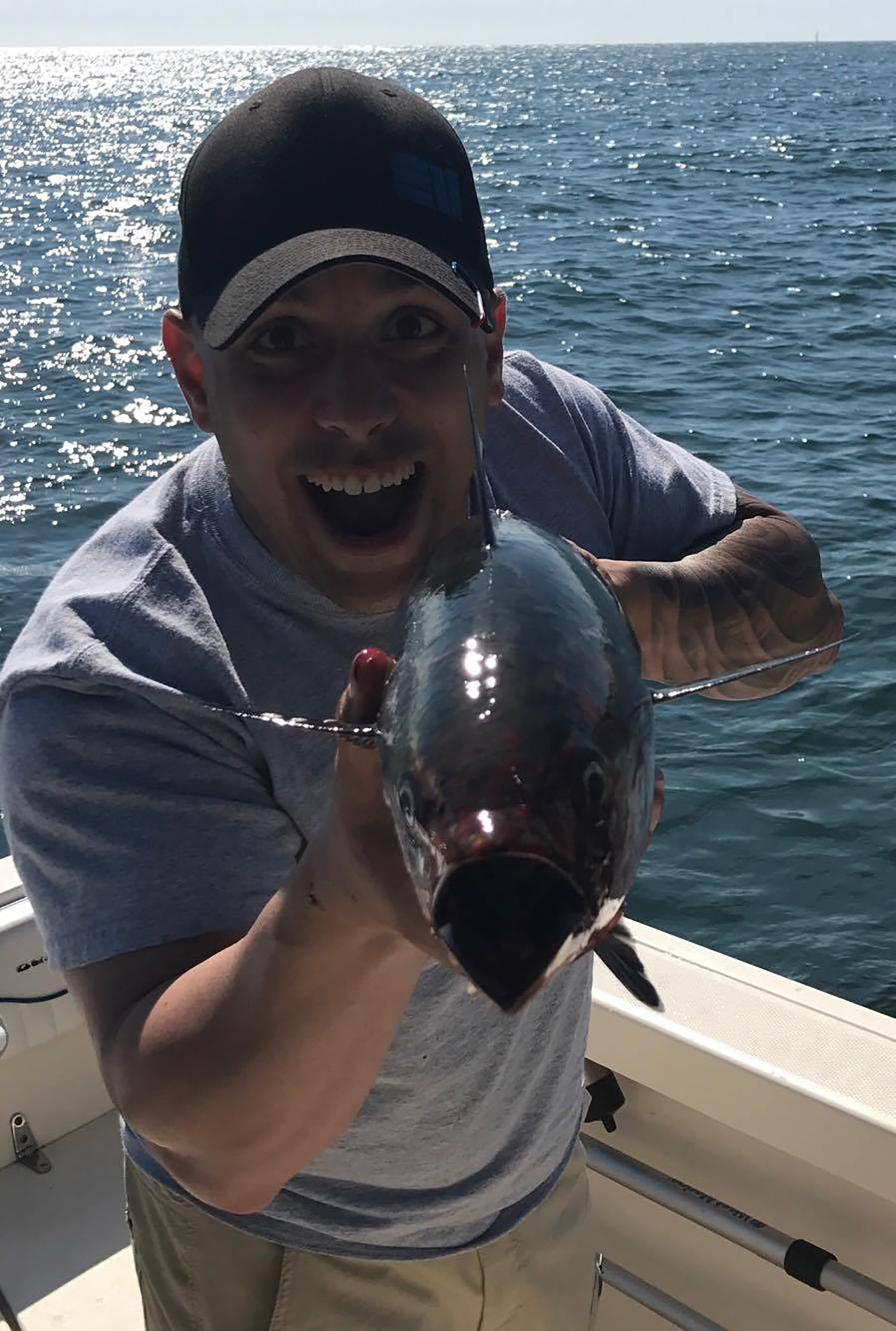 Contemplating kayaks and new gear, Brian whispered, “I’ve got a serious problem,” through an impossibly big grin. His words had the feel of a confession needing to be worked out in a room of sympathetic believers. He’s a military veteran with two tours overseas protecting us. His service, on which we rely to safely and freely enjoy our lives, is something which we should all contemplate and then shake his hand.

We fished with Captain Rene Letourneau of On The Rocks Charters who said, “This is one of the best populations of school stripers I’ve seen in 15 years of guiding.” 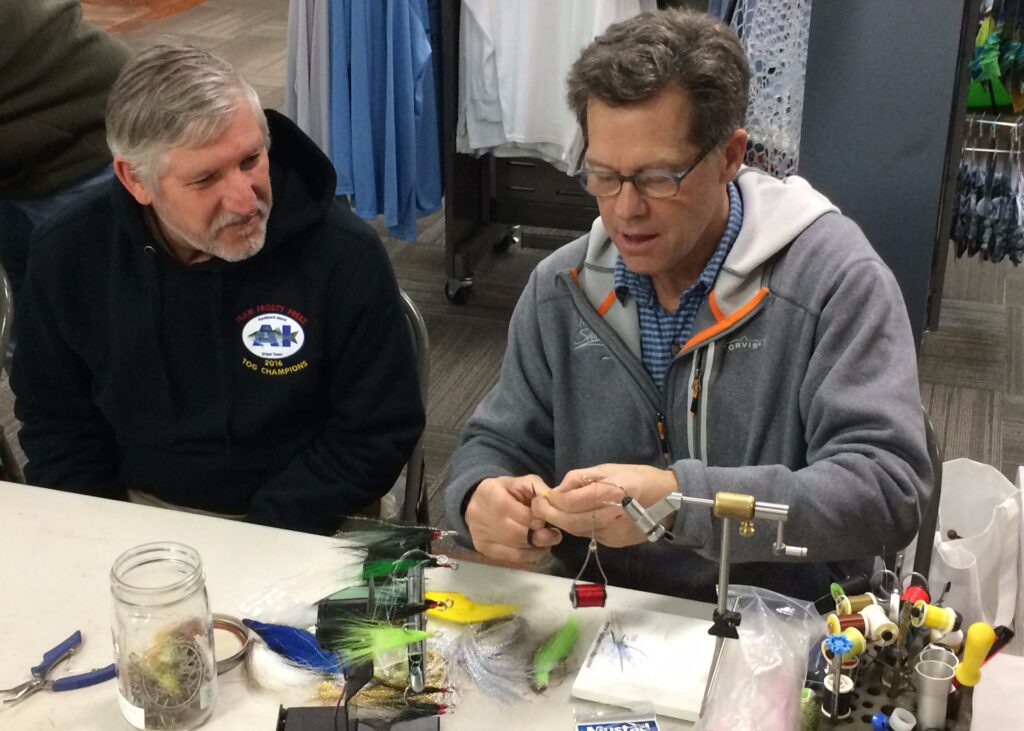 Peter Jenkins, teacher at his desk

Outside, roads were tight with dirty snow; it felt like years since we’ve been fishing. Peter Jenkins: shopkeeper, guide, tier of flies, relentless fisherman, consummate gentleman, stood shaking hands over the glass counter. Peter created a temporary oasis on a February night.

On another cold night, we met Jack Creighton, a retired police chief and President of the Cape Cod Salties fishing club. It was pretty clear he works hard to keep members focused on conservation. “We used to do a cod trip,” he told a room full, “But cod ain’t no more.”

Over the year, we covered several speakers and adventures with the R.I. Saltwater Anglers as they donated boats, sweat and time to keep kids fishing and stocks healthy. Newport’s Richard Laurie offered us simple fluke fishing counsel like, “You just gotta be where the bait is” and, “We stop fishing for the season when they stop biting.” Class dismissed.

In early summer we dug into landowners at unPleasant View in Westerly, who kept the legal economy booming while excluding us lesser folks from trashing the beach in front of their seasonal homes by walking on it.

The take-away word from my research was “disgusting” but we’ll end the year on a far more pleasant note next week. 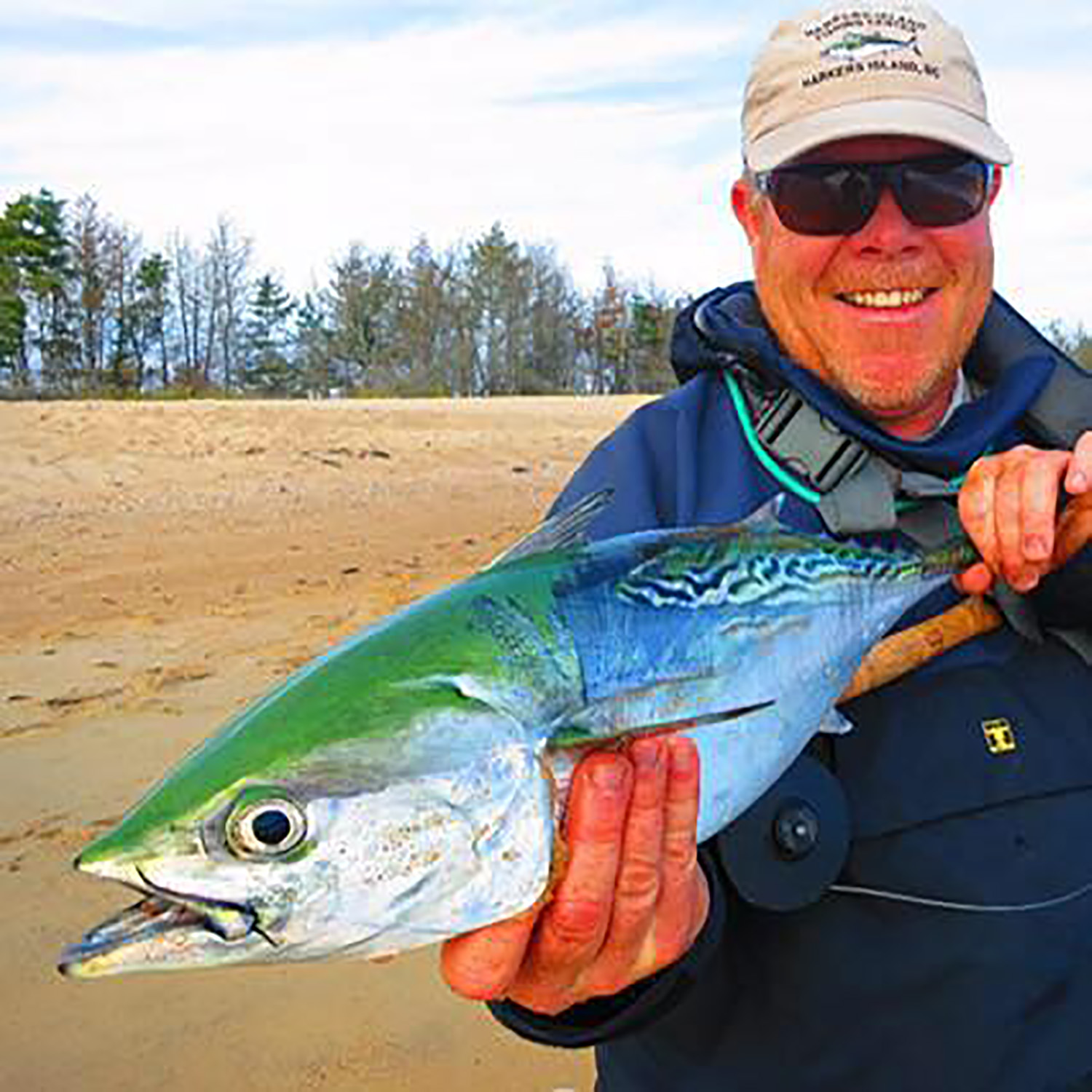 Pete Farrel, a guy with veins of saltwater and an eye for making time to go fishing.