The Narragansett Surfcasters held their 5th Annual Surf Day and Used Tackle Sale and as expected, the day was a big success. 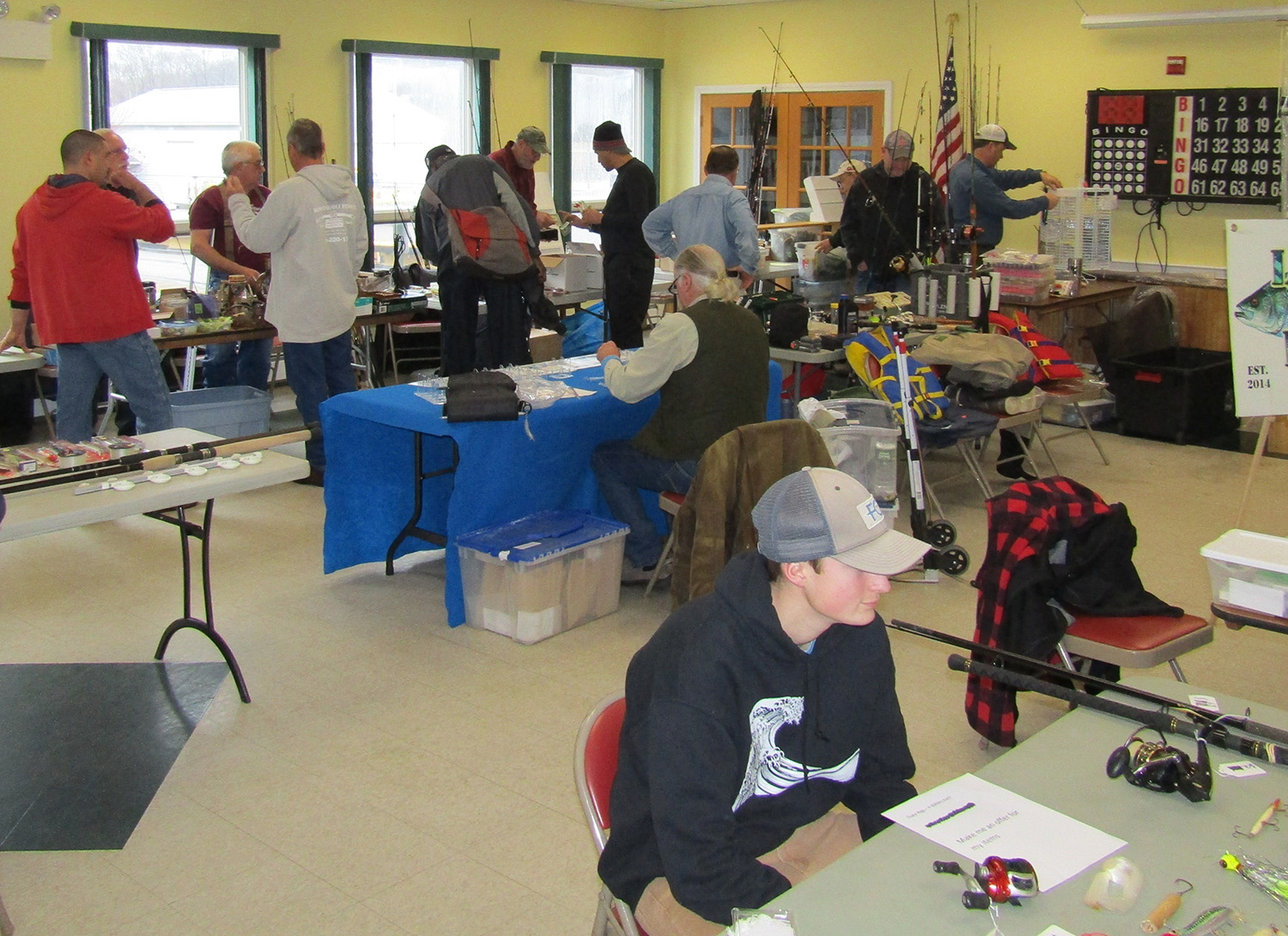 More than 250 people looked over thirty tables piled high with reels, waders, plugs and flies. Fishermen went in droves to shake off some winter rain, shake hands with friends they hadn’t seen in months and hunt for bargains. 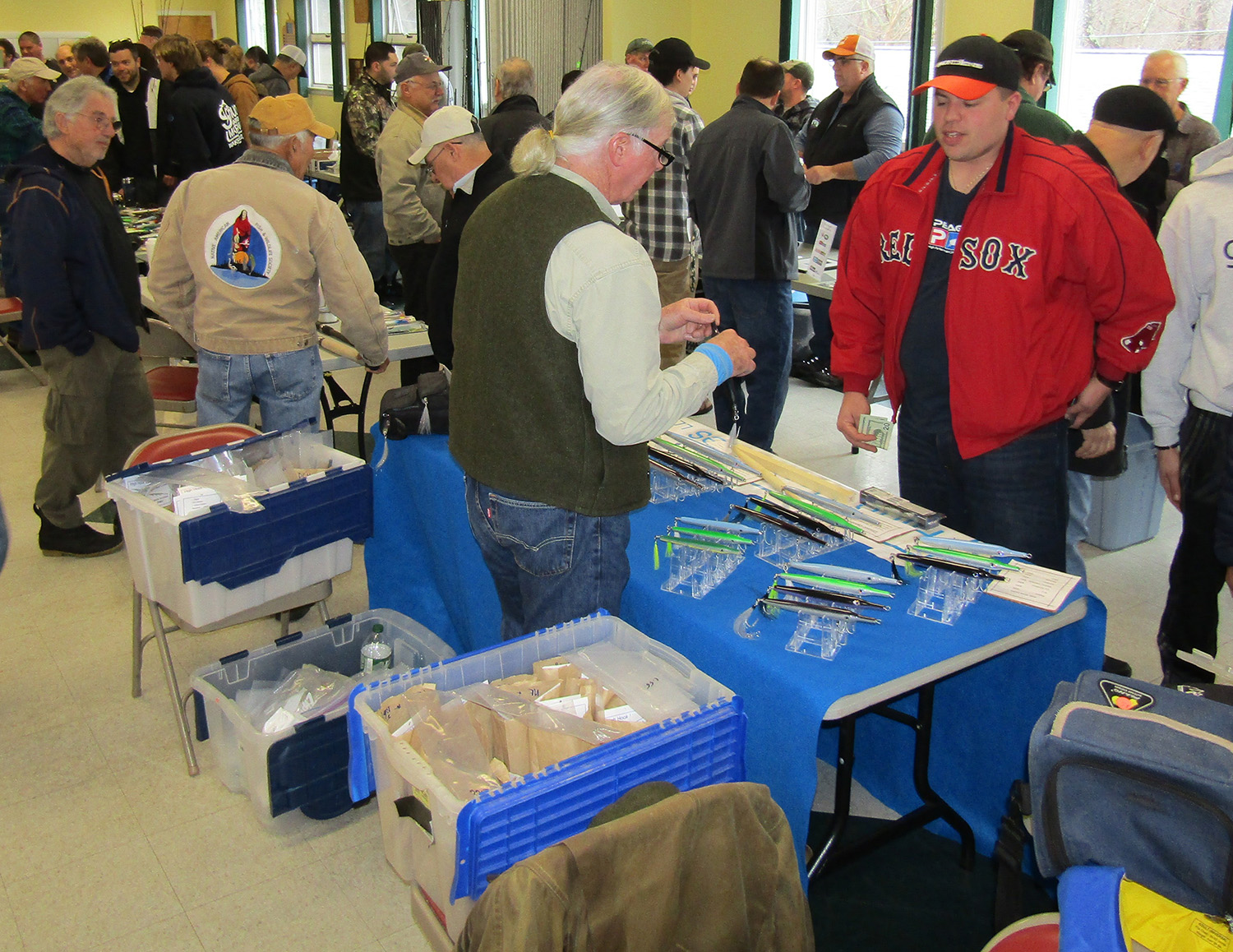 Shopping for lures on a February morning

Charlie Soares was there, holding court in his corner by the window. Fishermen leaned over table to inspect lures, some leaned back with MirrOlures and needlefish hanging from their flannel. Howard Reed of Narrow River Rods was there, showing his craftsmanship in the art of rod building. Fishermen made multiple loops around the room. Bags grew heavier. Smells of chili and clam cakes filled the air. Hands started coming out of blue jean pockets, beards got scratched as offers were made.

Then the tip hit the fan.

Honestly, a surf rod headed for the door, only to be concussed by a ceiling fan. A few seconds of that tip click, click, clicking made everyone turn to see what was the matter and have a quick laugh. Thankfully, the rod emerged unscathed. 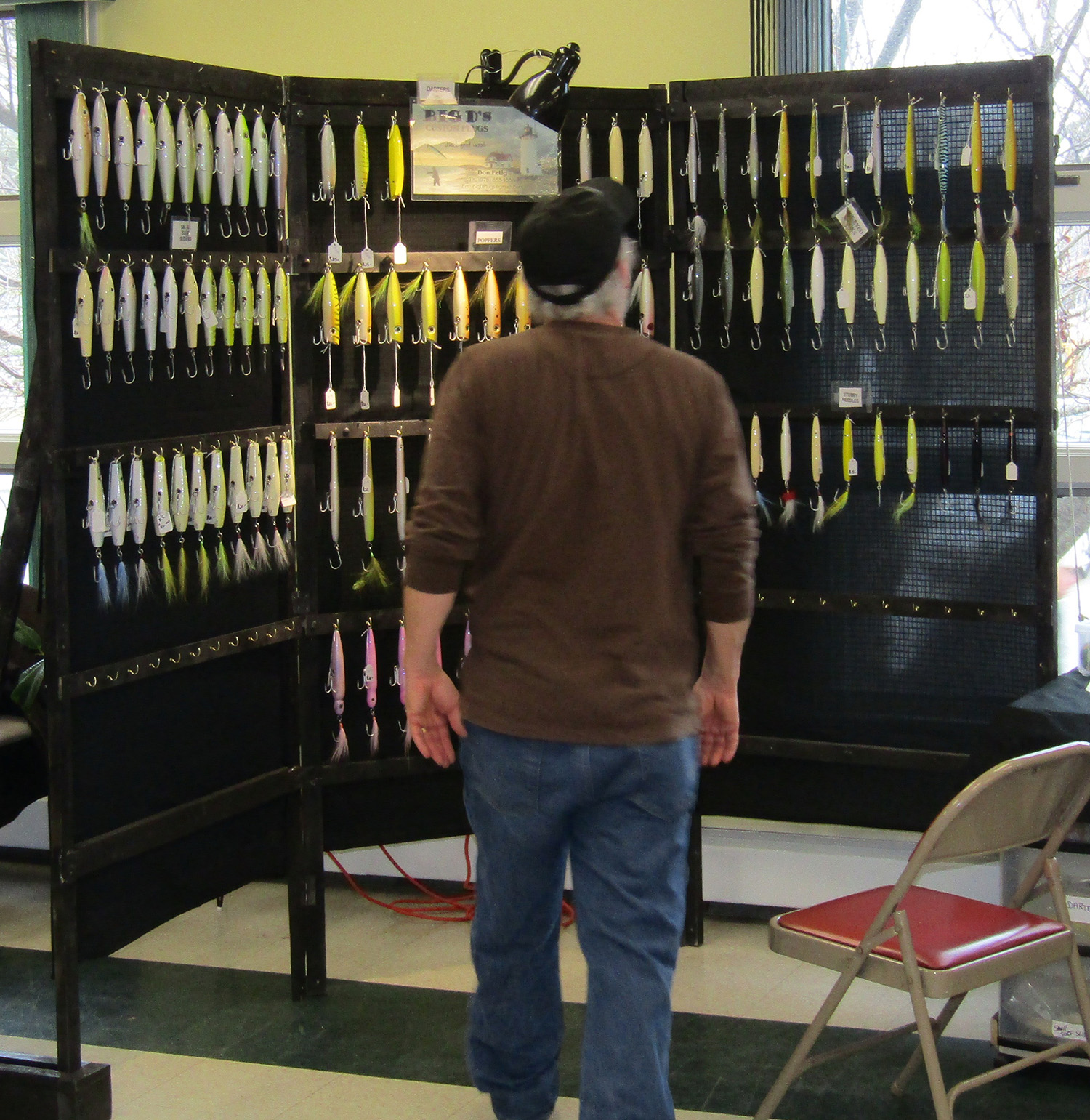 Hmm, which one can’t I live without…

The Surfcasters are a fishing club in the purest sense; it’s safe to say everything they do is a success. They host meetings on freezing winter nights with speakers helping members catch more fish. Through warmer months, evening meetings are held around grills covered in burgers and bowls heavy with littlenecks. Throughout the long summer, unofficially hold court at Monahan’s Pier as the day cools to night and the beach heats up with possibilities then close the fishing season with generous donations to local charities. They are a fishing group wisely without the politics which often bleed into clubs; these guys just love to go fishing.

The S.K. Waterfront Advisory Commission met to vote on an expansion of shellfish aquaculture in South Kingstown’s Segar Cove. Local sentiment was clearly opposed. Marilyn Mattera spoke of her concerns about the process and a lack of communication. She drew a comparison to the Land Trust’s efforts conserving acreage from the rush of commercial progress and that perhaps it was time consider such a big picture group to protect public waters. Margaret Schwab, a resident since 1948, said Raso’s notion that his proposed lease would not interfere with existing uses was wrong and in fact, it was, “very false to say that.” Margaret is right, his statements are false. There are lots of recreational and a few commercial users of that cove and they’re all just as important, if not more important, than expanding his business.

A 33′ striper, caught during May’s worm hatch, from a kayak, in Segar Cove, right next to where Perry Raso wants to expand his shellfish business

Diane Rodriguez spoke to her family’s years on the pond and so many perfect evenings sailing that silent catboat I’ve admired while fishing from my kayak. That boat, that sweet boat, with it’s happy sailors leaning back on the gunwale to absorb a day’s end, was a primary motivator for calling attention to this application, to our state’s priorities, to how they conceptualize balance and more importantly, to how recreational users ultimately are weighted in the process for sighting similar farms. If their goal is to promote aquaculture, stacking more weights on the green publicity and tax dollar scale than on the scale on which all other users must fit, then the system has a giant crack and it was showing.

Recognizing The Town has no legal jurisdiction over proposed leases or any statutory obligation to inform terrestrial abutters and that the commission was just advisory, from the table came the comment, “CRMC can ignore it, as they usually do…,” and that, I believe, is the real rub. Shellfish aquaculture can be environmentally positive but occasionally it’s not what it offers but what it takes away that hurts the pond and it’s users most significantly.

You can learn more about people’s concerns by reading through www.savepotterpond.org or read the plethora of public comments opposed to the proposed lease at

Rhode Island Kayak Bassin has received permission from RIDEM to hold their first kayak fishing tournament trail around the state. This is a new Facebook group administered by R.J. Alves and Matt Tetrault, two excellent fishermen who have worked hard to get this group a reality. Both are Pro and Elite Staff for several fishing related companies with years of experience on the water and in kayaks but more importantly, they have that essential drive to create a perfect, fun, safe, competitive day of fishing.

Throughout the year, tourneys are planned at the Woonasquatucket Reservoir, Keech, Olney and Wakefield Ponds, Bowdish Reservoir and a season wrap-up October 13 at Indian Lake. They have a limit of twenty anglers per event so if you’re interested, look them up and watch for updates. All tournaments will follow the Kayak Bass Fishing’s Competition Rules Standards, which you can read at http://www.kayakbassfishing.com/kbf-rules-standards.

The first event will be April 21 at South Kingstown’s 1043 acre Worden Pond in South Kingstown. Given its history of producing early season bass and a mean depth of four feet, Worden is a popular spot so entries have been filling up quickly.  Check in starts at 5:30 a.m., lines drop at 7:00 a.m. and the contest ends at 3:30 p.m.

A tip of the camo hat to this new group; I hope they have a giant first year catching bass all over our wonderful state.

Fish swim. When you’re fishing the same reefs the day after bait tye-dyed your color machine and stripers were all but inviting themselves aboard and now you can’t find a single one, you start reaching for answers. Not excuses, explanations. One day does make a...
Keep Reading

Here's a link to the ASMFC Amendment VI which is all about protecting striped bass. There are several options in there and I would suggest the Status Quo option only ignores the obvious and does nothing for a fishery we love and even depend on....
Keep Reading