There’s a lot happening on a frigid February day so in the words of my friend Dan Ferguson, “Let’s get to it!” George Pomerovo brought his Seminar Series to Rhode Island College’s Roberts Hall and he packed in more than 200 eager fishermen and women. There was a lot to be learned from a full slate of captains and guides, seasoned pros and trophy hunters like “Crazy” Alberto Knie. If you weren’t there, here’s a few highlights.
Talking about schooling bluefins, Captain Andy DeAngelo said, “Last year we had zero out to the thirty fathom line.” But Captain Jack Sprengel was right there to keep fishermen in the game by saying that even though bluefin fishing has, “been like playing Whack-A-Mole,” he added, “You don’t know if you don’t go!” As the conversations kept trying to get away from last years lack of big fish, George reminded everyone that, “It’s all about life.” Pretty prophetic for a fishing meeting but he’s right; find the bait, the structure, the birds, even the whales and you just might find the fish. 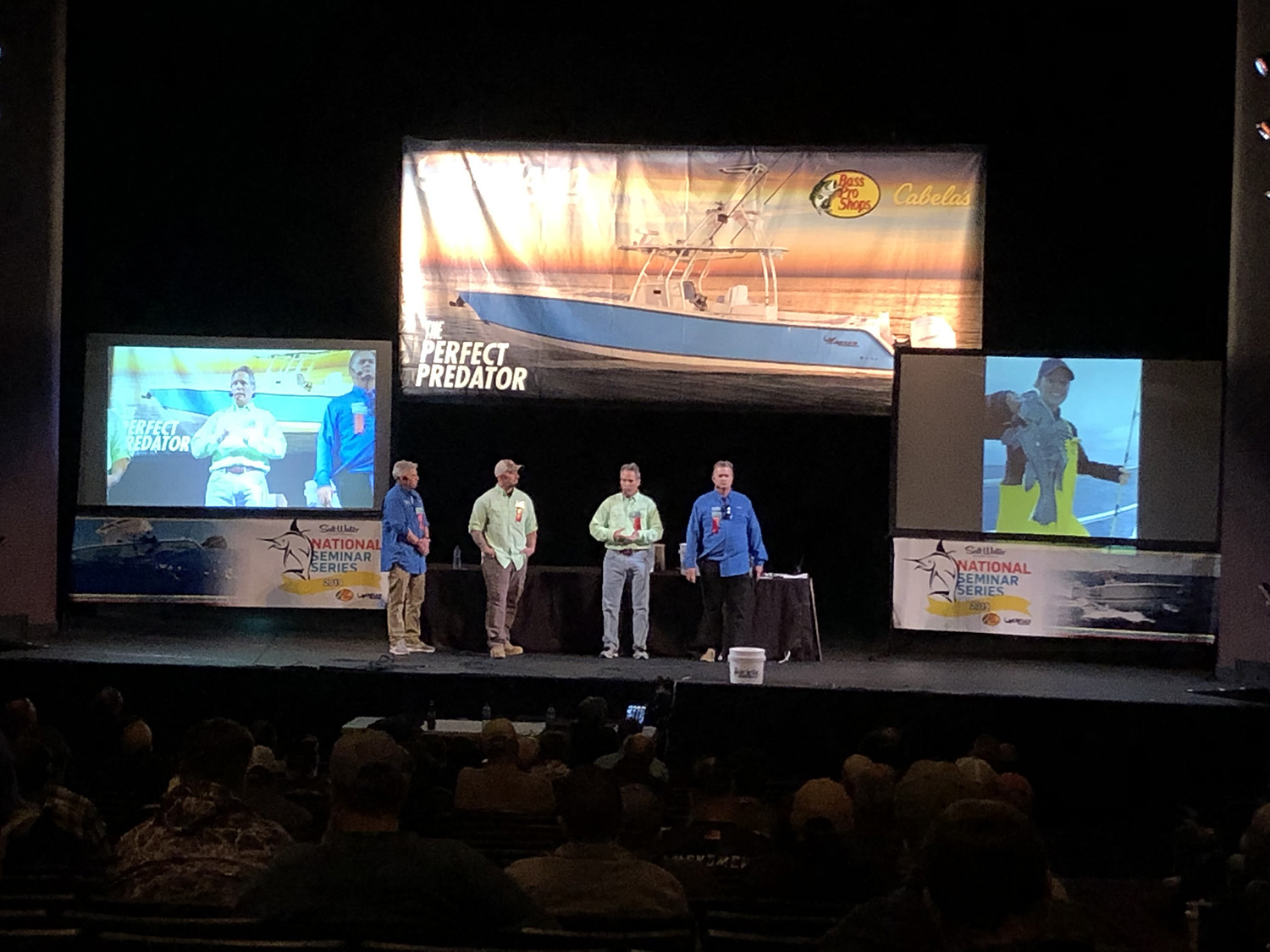 Talking fluke, Captain BJ Silva recommended looking for squid runs and signs of sand eels. There’s the signs of life again. Successful fluke fishermen are all about the drift and Captain DeAngelo was right there to add that, “If you’ve got no wind and no tide, you’ve probably got no fish.” Class dismissed. Everyone seemed to agree that fluke are challenging and can be caught in ten feet and eighty feet. BJ liked that 61 foot mark because just like colors, baits and numbers of beads or blades, we all have our sweet spot. Block Island’s Captain Chris Willi recommended reading John Skinner for fluke tips or watching his YouTube videos for tips on rigging and jigging. 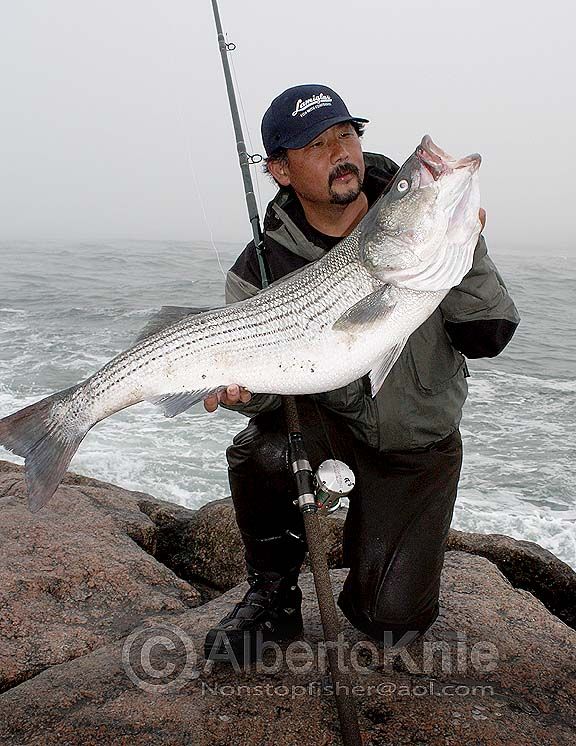 Alberto Knie hopefully won’t mind that I used his picture…

It was Knie who waged in with a lifetime of being in the surf adding, “Find structure, find big fish.” Knie told the crowd that they should think outside the bait box and use big bait for big fluke. “Use squid, scup, fluke. It’s all about the sweep, it’s all about the bounce, bounce, bounce.” He also mentioned using dogfish belly strips as an alternative. B.J. Silva was added that, “You can’t go too fast for these fish.” Then Knie shot right back, “Never, ever, ever, ever try to set the hook on the first bite…And don’t pump the rod, let the rod do the work.” Interestingly, if you didn’t already know this, fluke feed facing the tide, which will give you an easy advantage over those who didn’t know that, or don’t read Fish Wrap.
On the subject of our beloved stripers, Knie quickly reminded the crowd that, “Trophy bass are a totally different game.” Some of their recommendations were valid for largely any fish we target, like packing your reel tight with line, keeping in mind that fish might be underneath all the action and that many fish on the surface might already be committed to a meal. Captain Joe Pagano noted that, “Big fish are loners but will feed with smaller fish.” If you know anything about Crazy Alberto, you know he’s all about understanding moons and he’s also right. His mantra for catching big bass is two fold: fish near the new moon and near slack tide. Dead slack tide means bass have to swim a little for a meal, which is why he pushes “near” slack tide. The other key is to release. Those big fish are females, which makes them the breeders, which means they need to go back. This is the age of camera’s so CFR, catch-photo-release. That plea drew a big round of applause and it should. His last bit of advice was pretty simple. “While you’re dreaming about that big fish, somebody is out catching it.” Again, class dismissed. 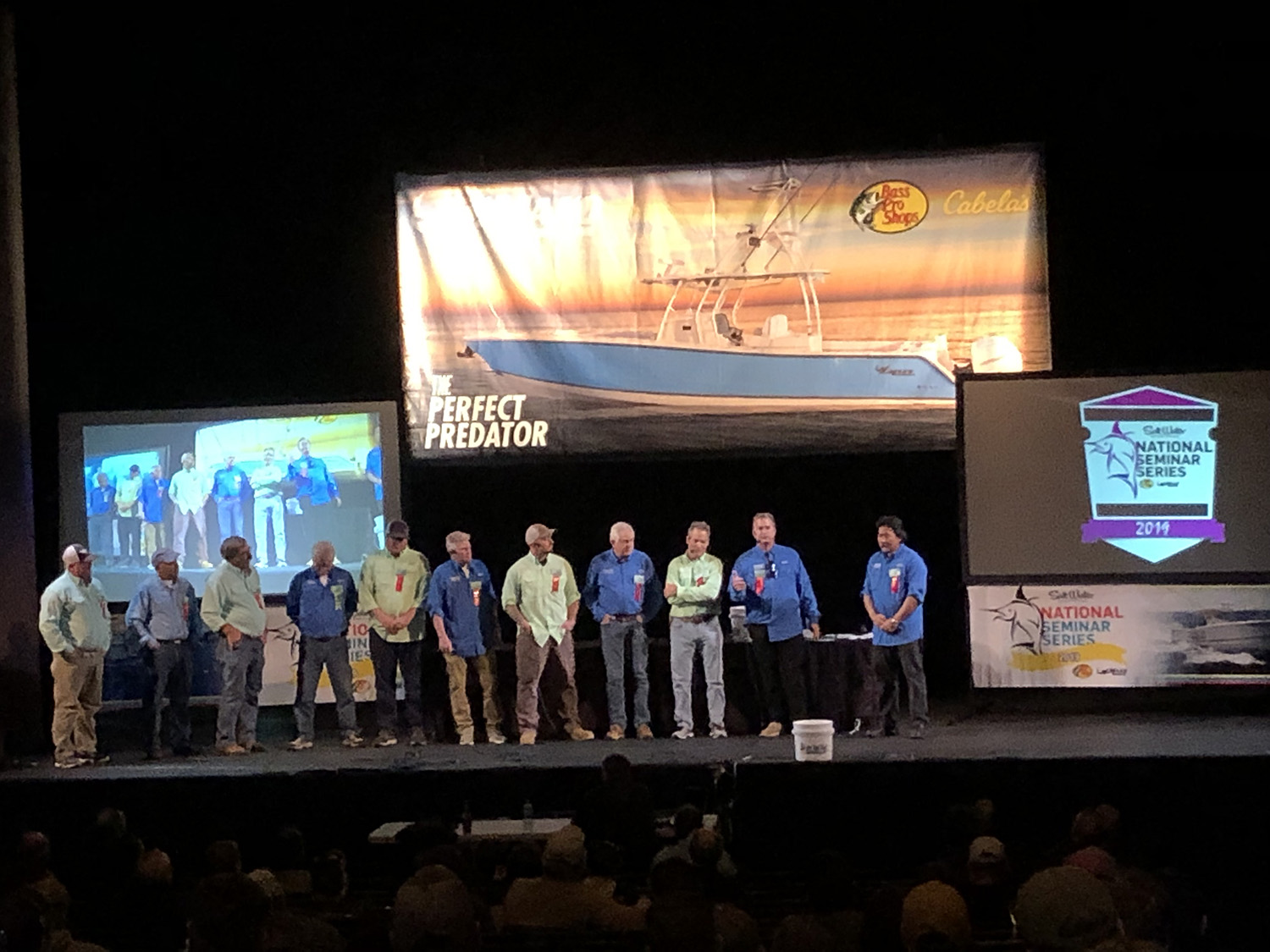 Sadly, we have lost Gayanne Hall. If you don’t know, she was a Hall, a proud sister in of one of the last true Block Island families. Her father was Allen Hall, a sword fisherman, lobsterman and unquestionably the strongest man anywhere. Bayard DuPont was her friend and husband of 45 years and said, “Allen was always friendly to me, and later I suspected that the real reason was that Gayanne was the only thing in the world that he was actually scared of.” That fun aside, Gayanne had a sweet soft side for a few select people and lost kitties. She spent countless sunsets at the North Light, sitting in the back of her younger brother Gene’s giant 5 ton military vehicle, sipping off a can of beer, casting plugs for cruising stripers and bluefish. I don’t know that they ever caught more than laughs and seaweed but that was precisely why they went. Gayanne Hall was tough, fun, real and true, she was what lots of us would like to be. No sugar coating, just the real deal.

Bayard said, “She was my rock; sometimes she was more like a volcano, but she was always there for me.”

If you knew them, you’d understand what a character she was and how much she will be  sorely missed on Block Island and beyond.

Photo courtesy of the most amazing Cindy Kelly