On February 21, my good friend Peter Jenkins at The Saltwater Edge hosted another excellent Surf Night. Peter brought in Dave Anderson and Gerry Audet to walk us through finding fish on a make-believe spot they’re calling Mystery Island. The deal was, based on all kinds of parameters which easily will transfer to your favorite spot or one you’ve thought about hitting, they helped us understand currents, boulder fields, eddies and other places big bass lurk. These two experienced surfcasters also helped us understand winds and tide so critical so catching fish. Peter always does a fine job with the appetizers and an icy cold white cooler behind the counter.

If you’re feeling the mid-winter burn of no fish on the line or horizon, visit Peter’s shop at 1037 Aquidneck Avenue in Middletown. You’ll feel much better.

The Massachusetts Department of Marine Fisheries is considering, “two new conservation measures for the striped bass fisheries aimed at minimizing the number of fish that are killed through hooking and releasing. The proposed measures would prohibit the use of gaffs and mandate the use of in-line circle hooks when using live or cut natural baits.”

Stripers are a favored fish around here and conservation is becoming more critical as we get new data showing stocks are in rough shape. Tony Friedrich has an excellent article in the January edition of The RI Saltwater Anglers Association newsletter. Using the latest data and numbers from the Marine Recreational Information Program (MRIP), Tony wrote that it’s clear, “Striped bass are overfished and overfishing is occurring to those numbers.” That’s the last thing anyone who cares wants to hear about a population.

Courtesy of our USGS

A few weeks ago we wrote about the unconscionable damage Maryland anglers are doing to striper stocks. To be specific, we wrote, “It’s disgusting that Maryland fishermen kill 19” striped bass.”

We failed to mention they also exceeded their quota last year.

So all this means that we Yankees need to step up and stop the slide to another moratorium.

There are a few specifics to this proposal but circle hooks make releasing fish easier.

Yes, it’s getting to be an almost annoyingly PC world but the data shows that 93% of their recreational anglers release stripers so why not use the right equipment? Part of the state’s concern is, “Studies have shown that about 9% of released striped bass will die from the effects of hooking and handling.” According to their official statement, “The latest catch estimate from the revised MRIP indicates that Massachusetts recreational anglers released almost 13 million striped bass in 2017. If we apply the release mortality rate of 9%, that means over 1 million striped bass died after being released.” This is not where we want to be. 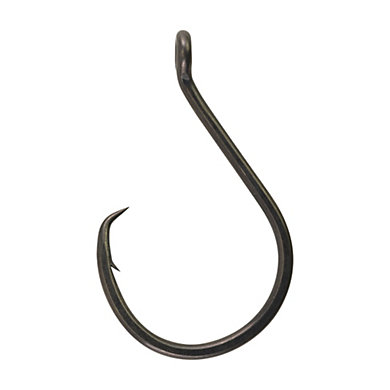 The other proposal is a no-gaffing rule.

Let logic prevail here: if chances are good you’re not going to keep the fish, why would you lance the gills out of it so that you could get a firm grip to throw it back overboard? Of course there will be hearings, heated arguments and some enforcement issues but at least Massachusetts is moving the ball forward. When you have a moment or ten, read anything from Charles Witek; wrap your head around how he sees the future of our fisheries, how regulations, industry pressure and how a logic vacuum can suck the life out a sane argument built on facts and then, a year or two later, the health of a fishery. So what does all this mean since we’re talking Massachusetts here? It means it’s time to act no matter where you live, especially if you hail from Maryland.

That mirror is going to look mighty big when we look back and ask ourselves what happened.

Ralph Craft of Crafty One Customs hosted a customer appreciation day this Sunday. Streets were lined with cars and trucks, there was little parking to be had, people were packed in tighter than two coats of paint and happy to be there. That’s all just one obvious manifestation of the solid customer base Ralph has built over the years. Ralph took an afternoon to say thanks.

What’s even more obvious is that he means it.

Tom Adams is a customer and believer in Ralph’s art.

“I like Crafty One Custom rods for a few reasons,” Tom said, adding, “it’s veteran owned and it’s a local business. Having a fishing rod that is designed from your thoughts…what I mean is; my first custom rod I wanted red, white & blue and I wanted it to say “live free or die” because I’m originally from NH. My latest custom rod was designed specifically for albies. I used a picture of an eye that had the coolest color green and another picture of the back of the albie which had greens and blue. Ralph is a true artist who loves fishing; he took my thoughts and pictures and created the most amazing rod from them. Support veteran and locally owned businesses!” 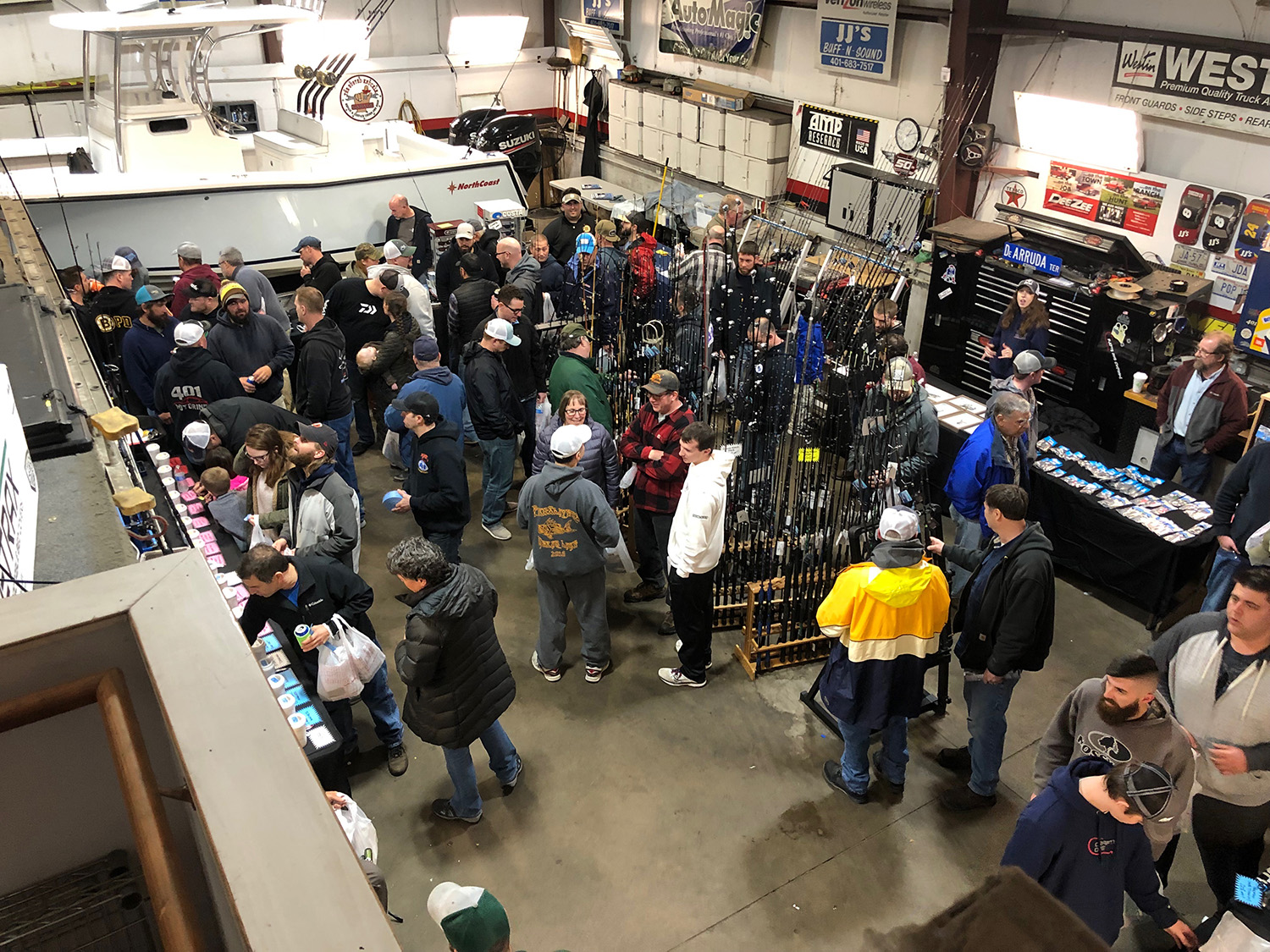 Packed ’em in, he did

“Be careful what you wish for,” Ralph said through a big smile, looking around at a building full of customers and shoppers.

Ralph Craft is a veteran. He’s also a pretty imposing guy. But there’s more. He speaks with an honesty we don’t often get to appreciate, especially in the first minutes of a first meeting. Sixteen years ago, a friend encouraged him to find an avenue to direct some of his post-military energy, so he tried building fishing rods. Sixteen years ago.

a full spectrum of colored options waiting on the wall

The expression, “I had no idea,” kept running through my head as we spoke. His art is stunning for it’s detail and expressions desired by his customers. On two floors, he listens, envisions, creates, paints, builds, dries, rolls and delivers real art meant for salt ponds and green water. How amazing.

While people mingled with cans of Coke and Bud Light, Ralph carefully helped me understand how devoted he and his team are about this work. Together, they build rods meant not just to land fish but to be enjoyed, cared for and passed on.

He guides his employees to honestly understand the excitement they’ll feel when a person fishing next to them catches and releases a fish on a rod they built. Fly fishermen know that joy when a trout comes to the net, hooked with a Mickey Finn they tied themselves; this is no different. Ralph also spoke of the significance of hooking a fish while respecting the life at the end of the line. There’s a lot to learn from Ralph Craft.

There’s more. Ralph seemed a bit humbled at some honest, well deserved press he received recently about his business and earlier about his friend Mike Littlefield, whose son is working his damnedest to beat down some health issues and get his childhood back on track.

We don’t always say thank-you anymore; Ralph didn’t have to.

a dirty desk says it all: art in the making

Crafty One Customs beats with the pulse not just of his customers but with his big picture belief that we’re all in this together, that we’ll all succeed if we work together. Imagine that? “Excellence come from failure,” he said, acknowledging our natural weaknesses surpassed by our wonderful ability to build back up again.

Sixteen years, from a friend’s advice to a garage to a storefront and growing every day. Be careful what you wish for indeed.