There’s much to learn from three veteran fishermen 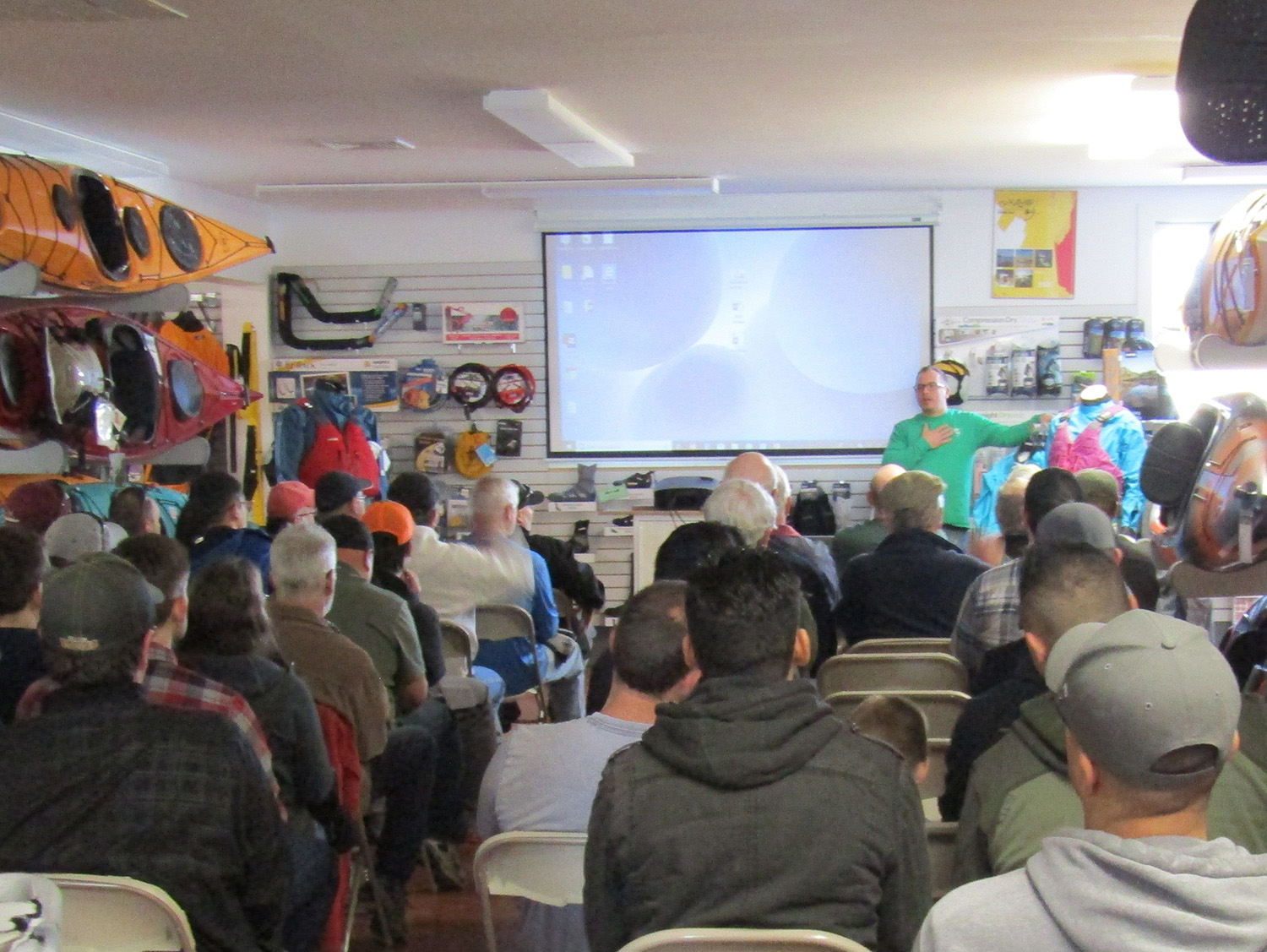 As a bluebird Saturday drew fishermen out to tear off shrink wrap or frantically start organizing gear they should have combed through while it was snowing, the Kayak Centre in Wickford was packed. Randy DeGrace, Ian Clark and Jimmy Chappel of the 1000 member Facebook group Ocean State Kayak Fishing, gave presentations rich with advice for catching stripers, bluefish, albies, bonito and pretty much anything that swims.
Ian made it clear he was a fisherman before he was a kayak fisherman. That’s significant because he learned skills for finding and catching fish then adapted them to the mobility of his Ocean Kayak Trident. 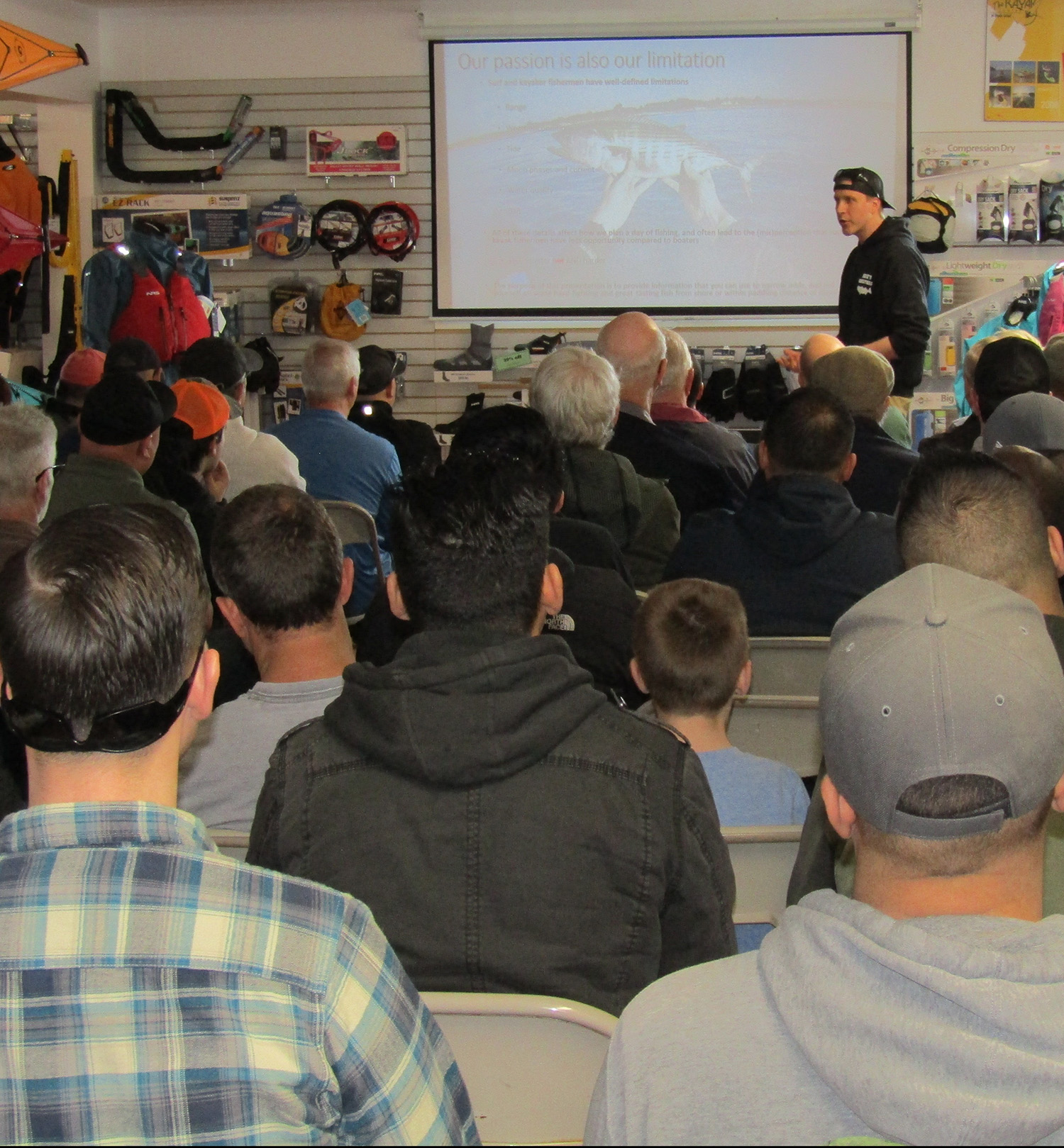 “Water clarity is more important than location,” he said, referring to false albacore. Ian noted that fishing is part science and art with both being rooted in observation and practice. Trying to put an end to the annual bonita/bonito confusion, he showed off an albies dark spots and lack of sharp teeth. “Bonito,” he said, “are full of teeth,” a point he proved with a GoPro movie of him catching, hoisting and successfully releasing one. Several times he said that both prefer moving water so that’s where kayakers need to be. “Avoid scum lines,” he said. Too much churned up water affects their ability to see prey. “Albies fight way harder,” whispered Randy DeGrace through his big smile. 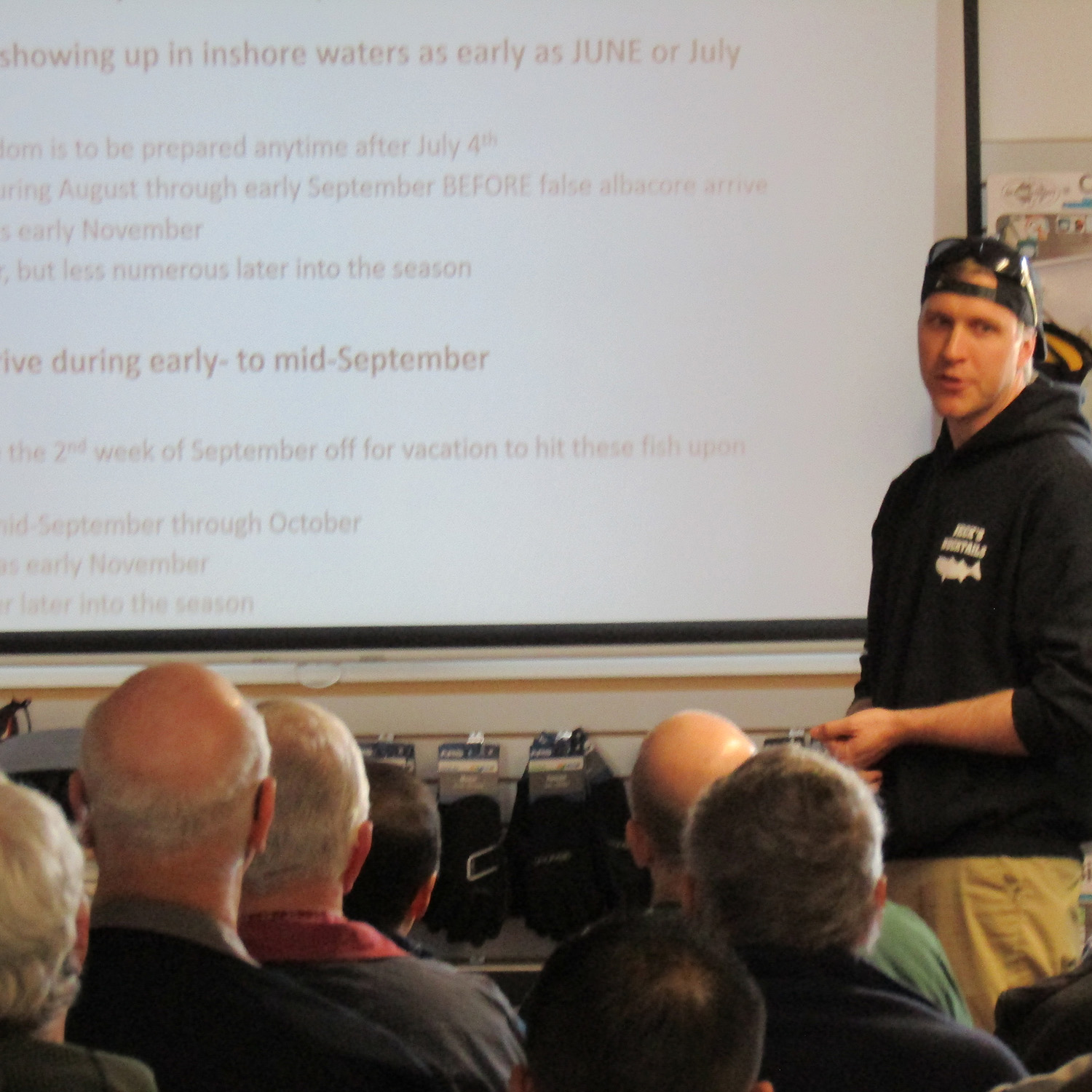 Ian Clark in front of a screen full of tips

“Wind at your face, fish at your feet,” Ian said, detailing how winds and breaking tides can positively or negatively affect fishing. He recommended apps like Fish Weather, Buoy Data and Radar US to be prepared for weather and to position anglers ahead of tide changes. He mentioned some people’s aversion to Tactical Anglers clips, which can seem bulky but dispelled any risk because despite albies’ reliance on sight feeding, they can swim up to 40 mph so a small clip shouldn’t distract them. For releasing albies successfully, Ian uses the spike approach, where the albie is plunged nose first back to the sea. 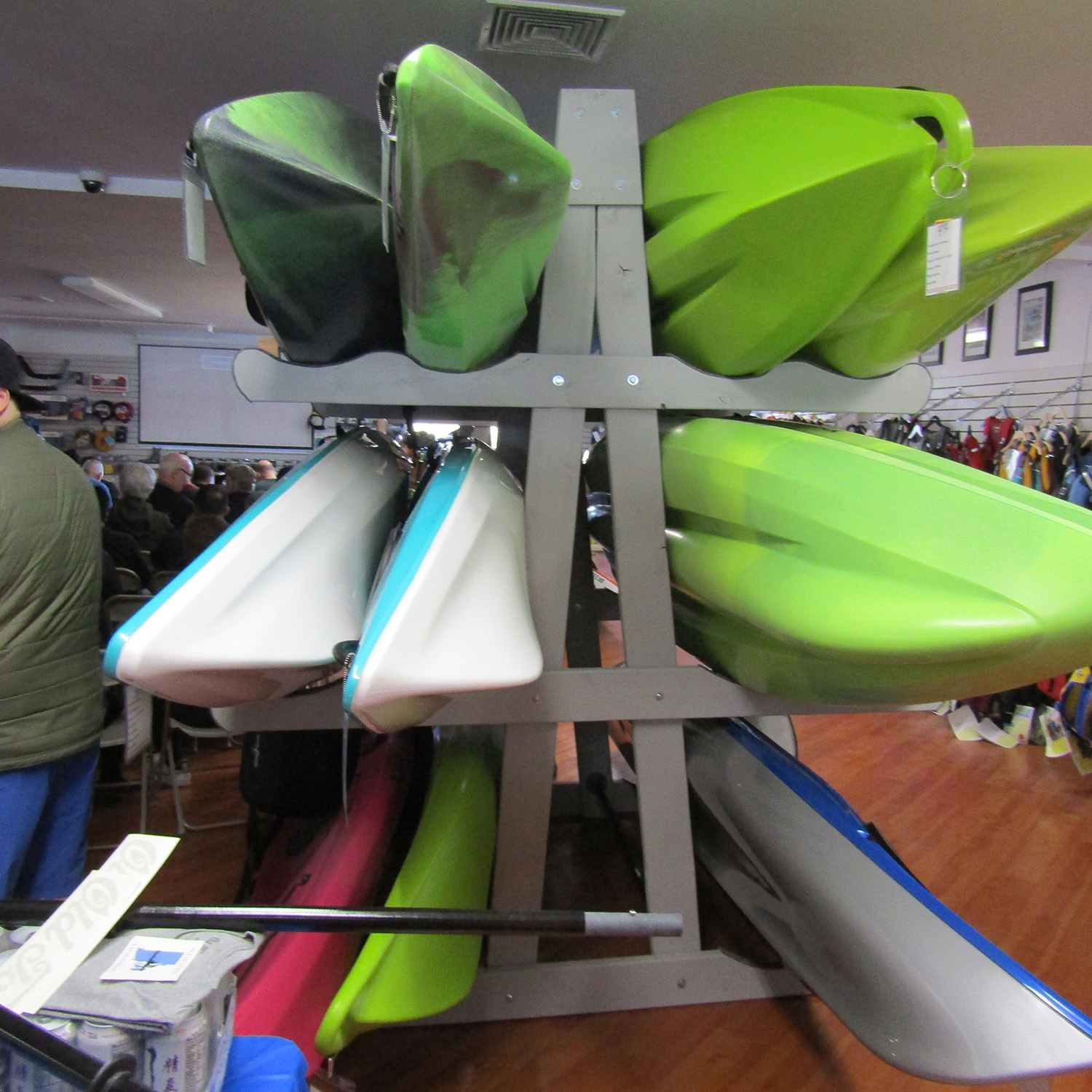 boats, boats and more bots at The Kayak Centre

Ian Clark is a natural speaker, his presentation was clear, his passions obvious. Who else schedules vacations around the ablies annual return? Interestingly, the first question posed to Ian referred to public boat launches. That indicates not just how important access is but to how he made everyone want to get out and go fishing. His slideshow was solid; it’s unfortunate more people didn’t take notes.
Jimmy Chappel followed with a talk on striped bass, starting with those Spring schoolies arriving when the water approaches fifty degrees. They tend to be covered in sea lice and to facilitate easier and quicker releases them, he recommended crushing the barbs. In late May and early June, Jimmy shifts his focus to upper Narragansett Bay where menhaden school. Pogies are excellent striper bait, either live or chunked. 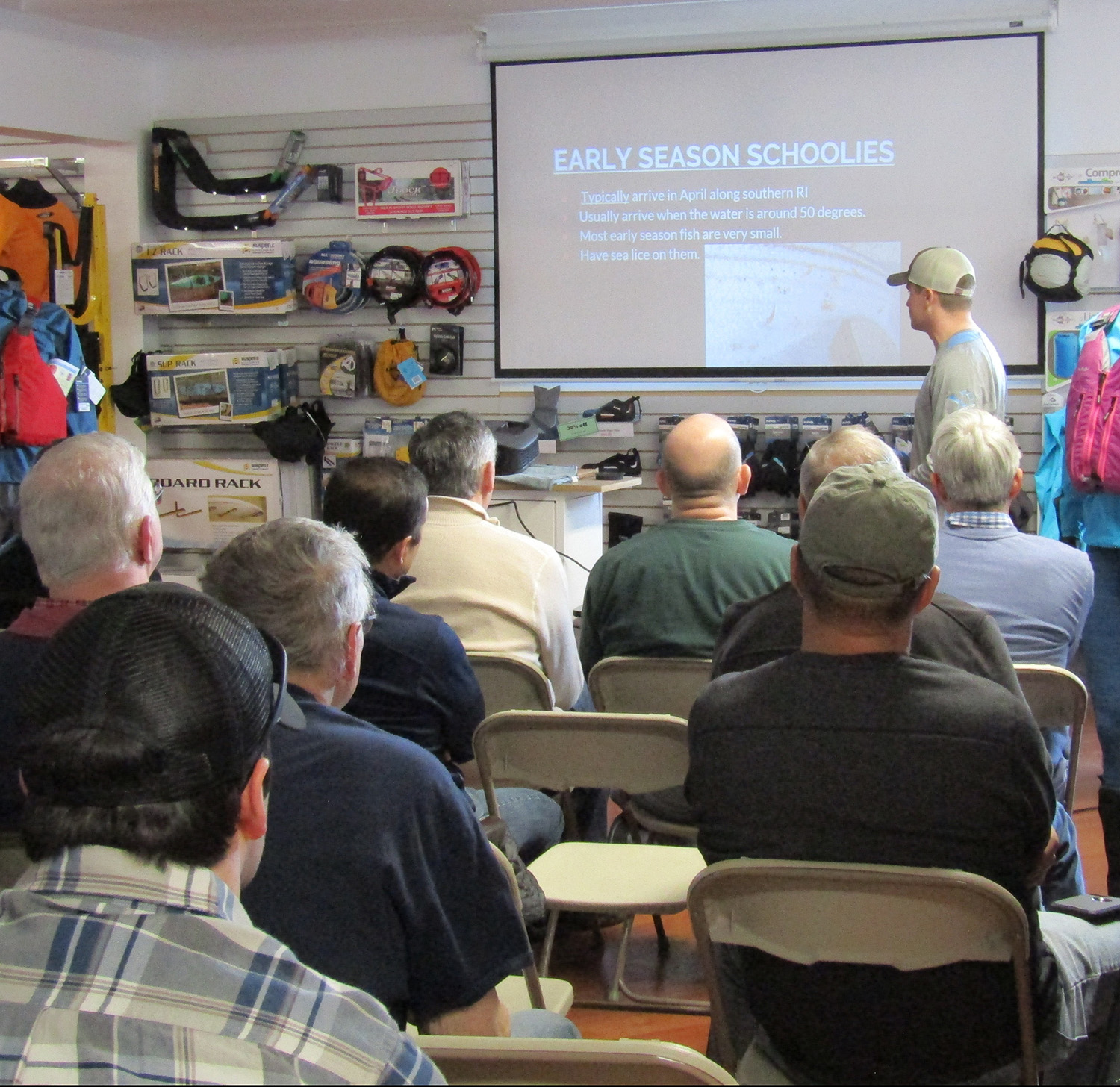 “No bait is too big,” Jimmy said. For snagging, he prefers a three foot section of 50# mono leader attaching a barrel swivel and snag hook, all tied to a 50# braid main line. For chunking, his go-to combination is a fish finder rig. He advised using a lighter line to attach the weight so that in case it gets fetched up, it’ll give way before you lose the fish.

He likes his Shimano Baitrunner reel because fish don’t feel any resistance from the drag when they start to swim away. For fishing with live eels, Jimmy uses 5/0 or 6/0 circle hooks and always a barrel swivel above the leader. “When a fish hits the eel, lower your rod parallel to the water and set it when the line gets tight,” he advised. His best tip might have been that when handling live eels, beside packing a green dish scrubbie pad for some grip, to always leave their tail in the water since they just love to squirm their way right up your line and make a mess of things. For trolling behind his kayak, Jimmy showed a tube and worm set up with a red bait on the stern. Tipping them with live sand worms or at least a Gulp! imitation is a real kicker.
“Doc” lures rigged with treble hooks and Jumpin’ Minnows work in top water situations, although Jimmy swaps out hardware with size 5 Owner rings and size 1 trebles. His last slides covered soft baits, like the 10” Hogys he rigs weightless with bait keeper screws. 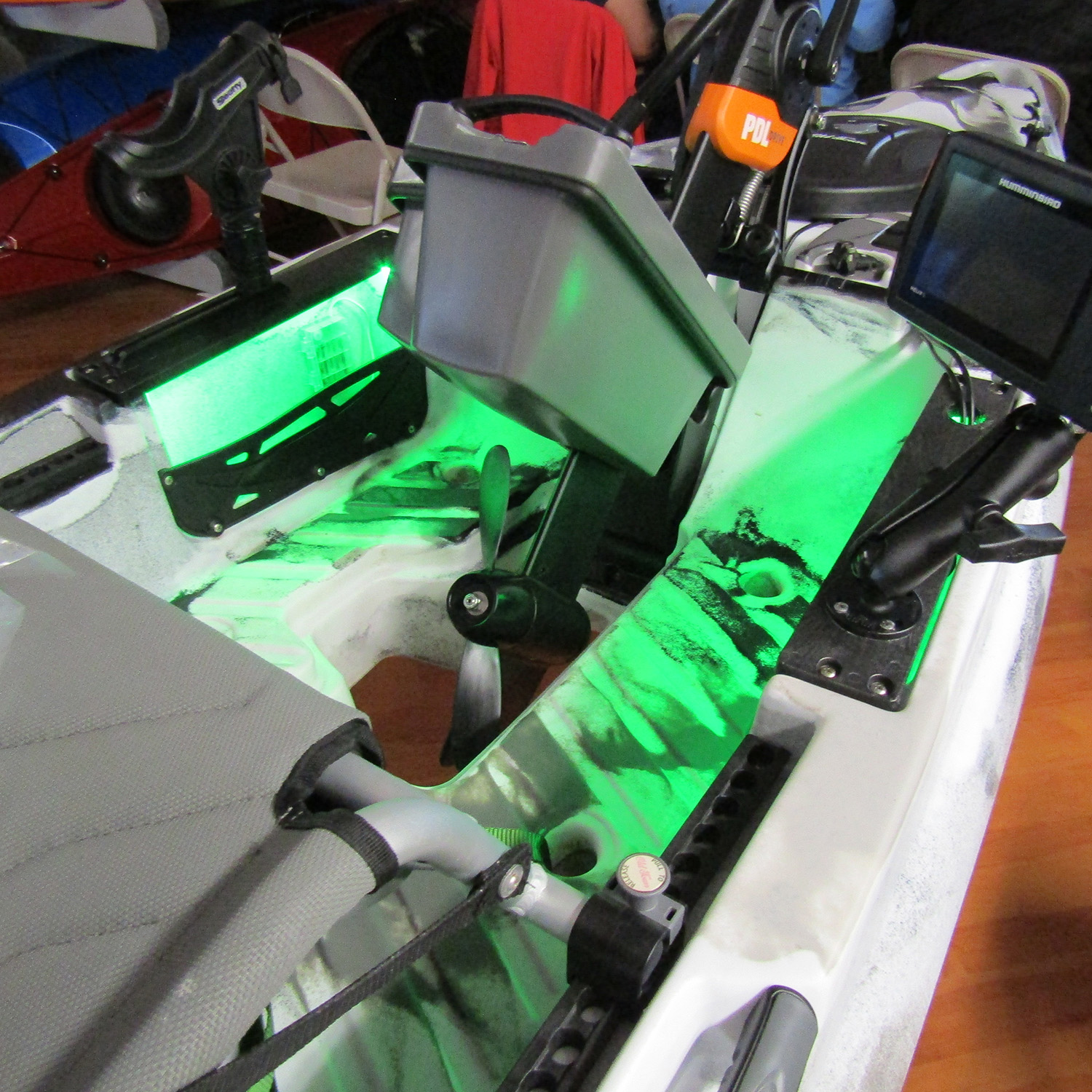 Randy’s boat is lit up and ready for summer

“I definitely recommend Hogy,” said Randy DeGrace, Hogy Pro Staff and self-declared “ex-canal rat.” Randy’s Old Town Predator was on display; based on how well it was rigged, it was clear he spends considerable time in it. He loves its reverse option; seems that saved his bacon a few times. Randy’s recommended rods were similar to both Ian and Jimmy’s: seven foot medium/heavy for casting those big Hogys, 30-50# braid, 30-50# fluorocarbon leaders on 3500 or 4500 series reels. Randy spoke about finding nervous water, working jetties, rocky shoreline, drop offs and the upper Bay. Incoming tides work for him as they tend to wash in bait.
Having covered lots of water, The Kayak Centre’s Co-Manager and Boat Buyer, Matt Bosgraaf and Co-Manager and Soft Goods Buyer Rachel McCarty thanked everyone and started drawing raffle tickets. 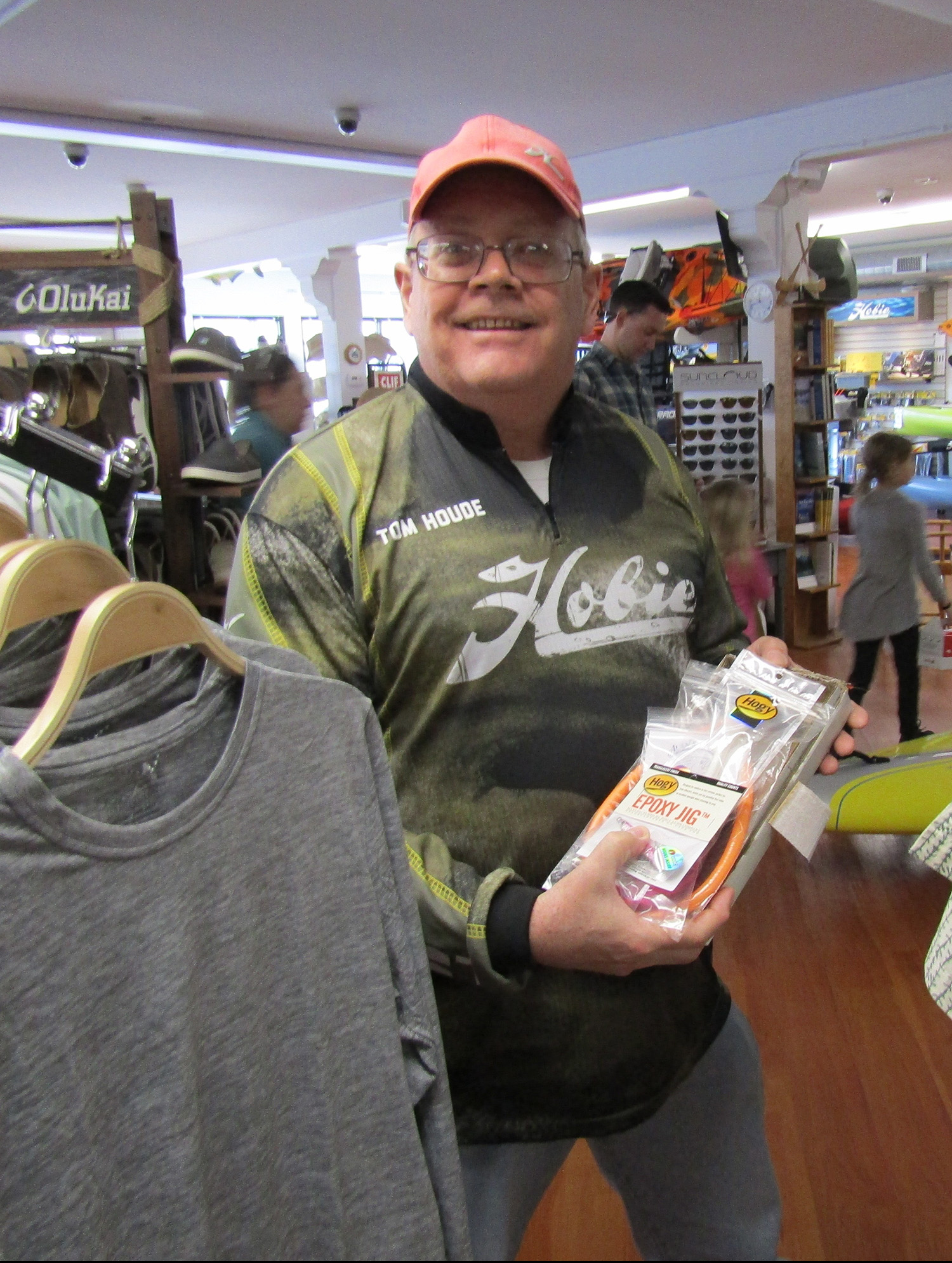 Right on time, Thomas Houde stepped up for his prize. The man has some serious luck.

Ian, Jimmy and Randy don’t rely on luck to catch fish, they use years of experience, trial and error and listening to other fishermen. “You always have something to learn,” Ian Clark said and certainly we all learned a lot from those three fishermen.

Block Island winter peace is something we should all discover. In a loud world of distractions, there remain a few small corners and wide stretches where we can again enjoy the quiet of years past. The Island has that, if you know where to look for winter, no one and Block Island.