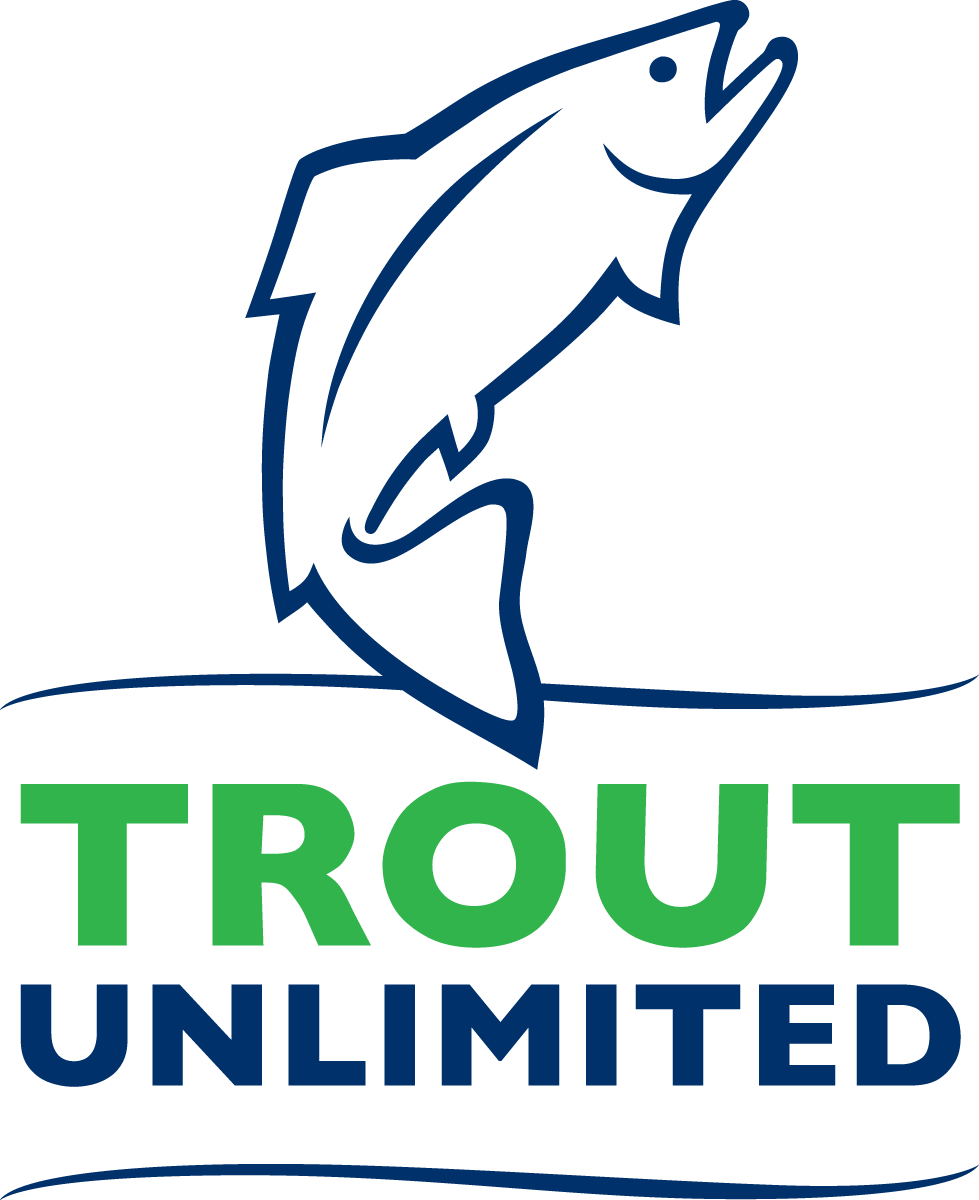 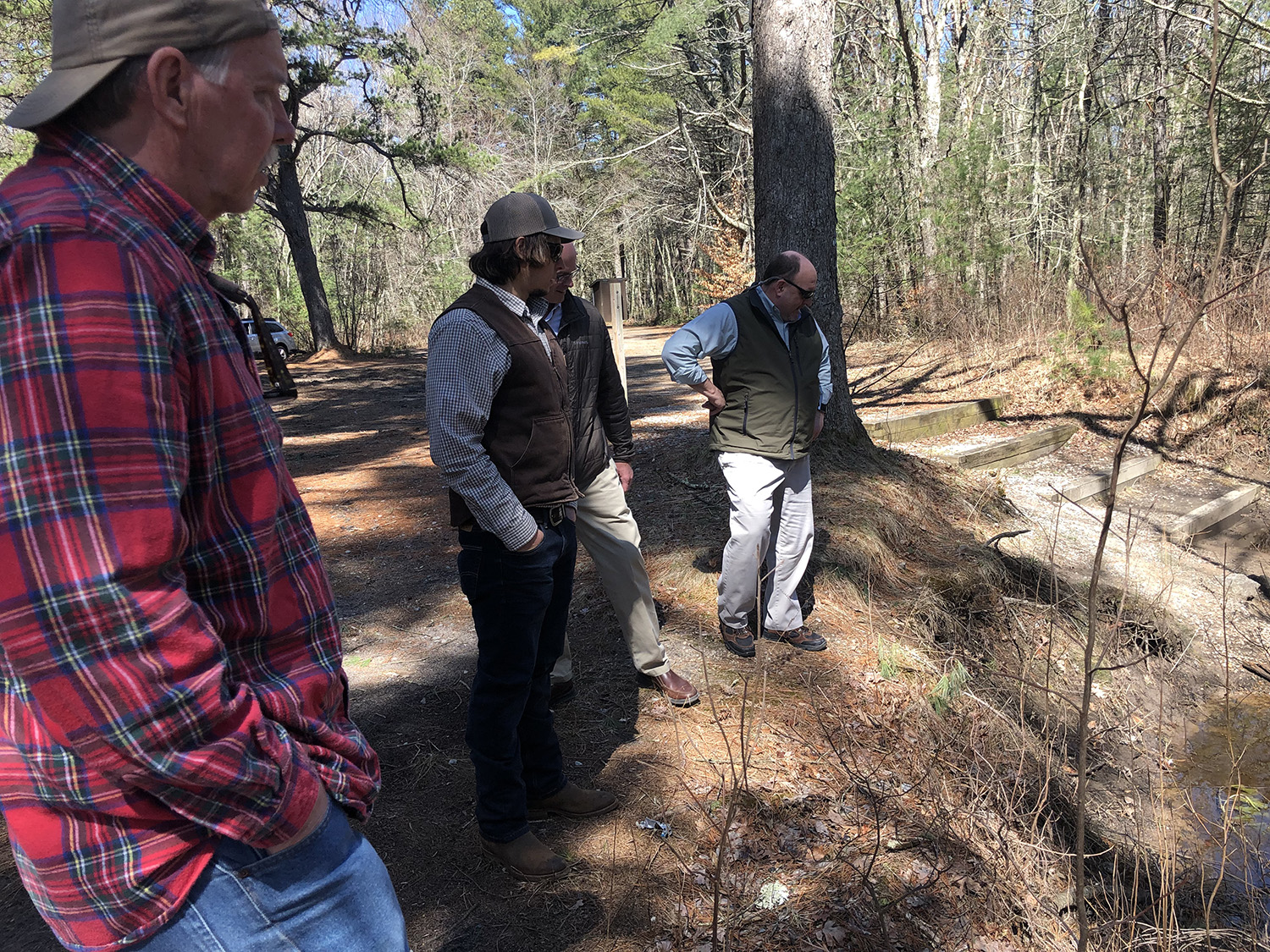 Four wise men assess the Wood River. The river will only benefit from this long overdue collaboration

Water is the great elixir.

It relieves stress, quenches thirsts, helps us discern answers, heals wounds of frustration, time and anger and always rolls along whether we hear it or not.

Water calls people. We wade into it to feel perhaps power or calm, to feel everything wash around us, maybe hoping some things will be carried away downstream. For modern day conservationists and anglers, it’s what’s downstream that concerning. Four anglers see a river’s future because they have great experience protecting and celebrating water. 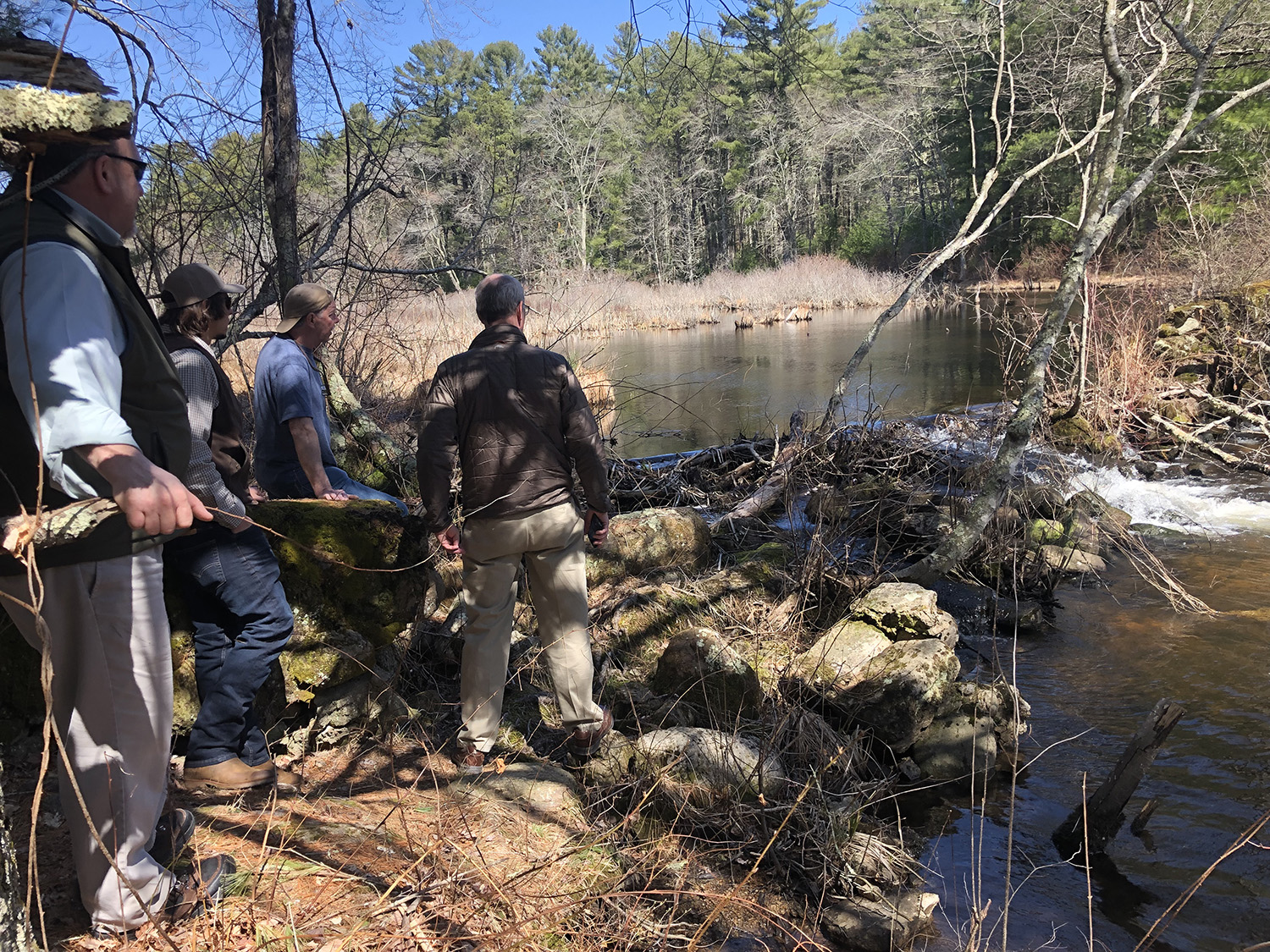 Their work is to let Nature get back to work

With a bright sky above the Arcadia Check Station, four men met by the proverbial bank of the Wood River to talk trout, cold water, thermal refuges and impediments to all of that. Chris Wood is President and CEO of the national conservation group, Trout Unlimited. Glenn Place is the thoughtful and creative President of its Narragansett chapter. Corey Pelletier is a new, dynamite RIDEM biologist with just enough skills and swagger to make things happen. Brian O’Connor is a local fly-fisherman, wood wright, patient observer of the Wood and founding member of Protect R.I. Brook Trout. All four looked over a river that PRIBT argues has been overlooked when it comes to protection of native brook trout. Neither rehashing nor ignoring years of circumstances and decisions which brought them together on a bluebird Saturday, these four fishermen were the latch to a door opening new conversations recognizing not only the obvious importance of native brook trout, but their populations in remote areas of the watershed. “I can close my eyes and see every aspect of the river,” Brian said quietly. “It’s a perfect sized river,” Chris agreed.

That exchange of respect and admiration for a river is exactly how things begin to change. 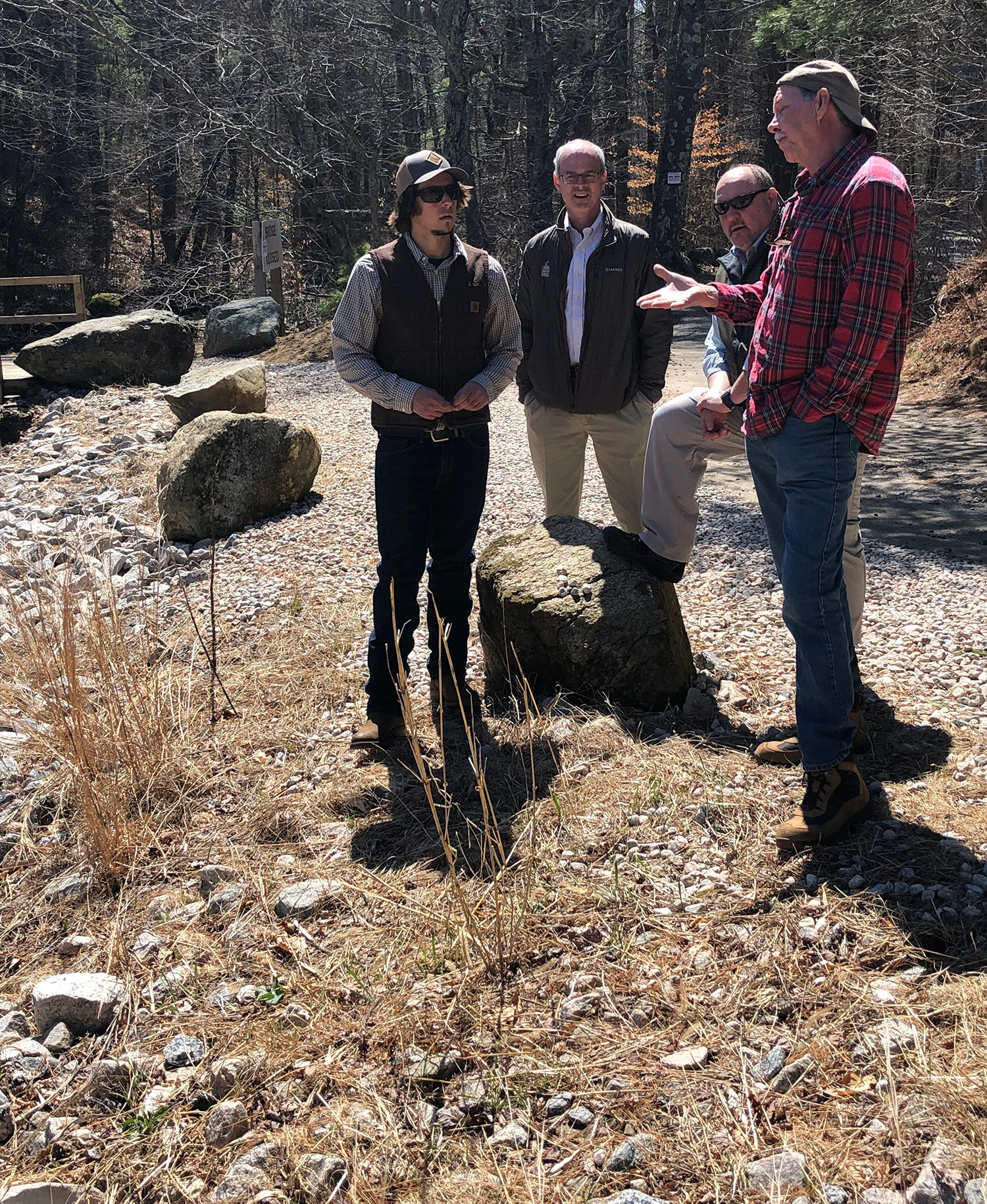 “There are 247 remaining dams in Rhode Island,” said Brian. For a recent list, click here. “If you know where the barriers and cold water are, can we make a plan to improve connectivity?” Chris Wood asked. That question was simple enough but old ways can be as entrenched as those ancient, irrelevant Civilian Conservation Corps dams which helped water sheep and people but now lay prostrate and mossy. What they still do well is impede fish movement and transfers of cold water downstream where trout desperately need it. Some real time impediments to removals are issues of private ownership, transfer of liability and a general malaise for tackling a prickly affair with litte media glamour and few shoulder patting headlines.

That’s where the gentlemen from TU shine the best. 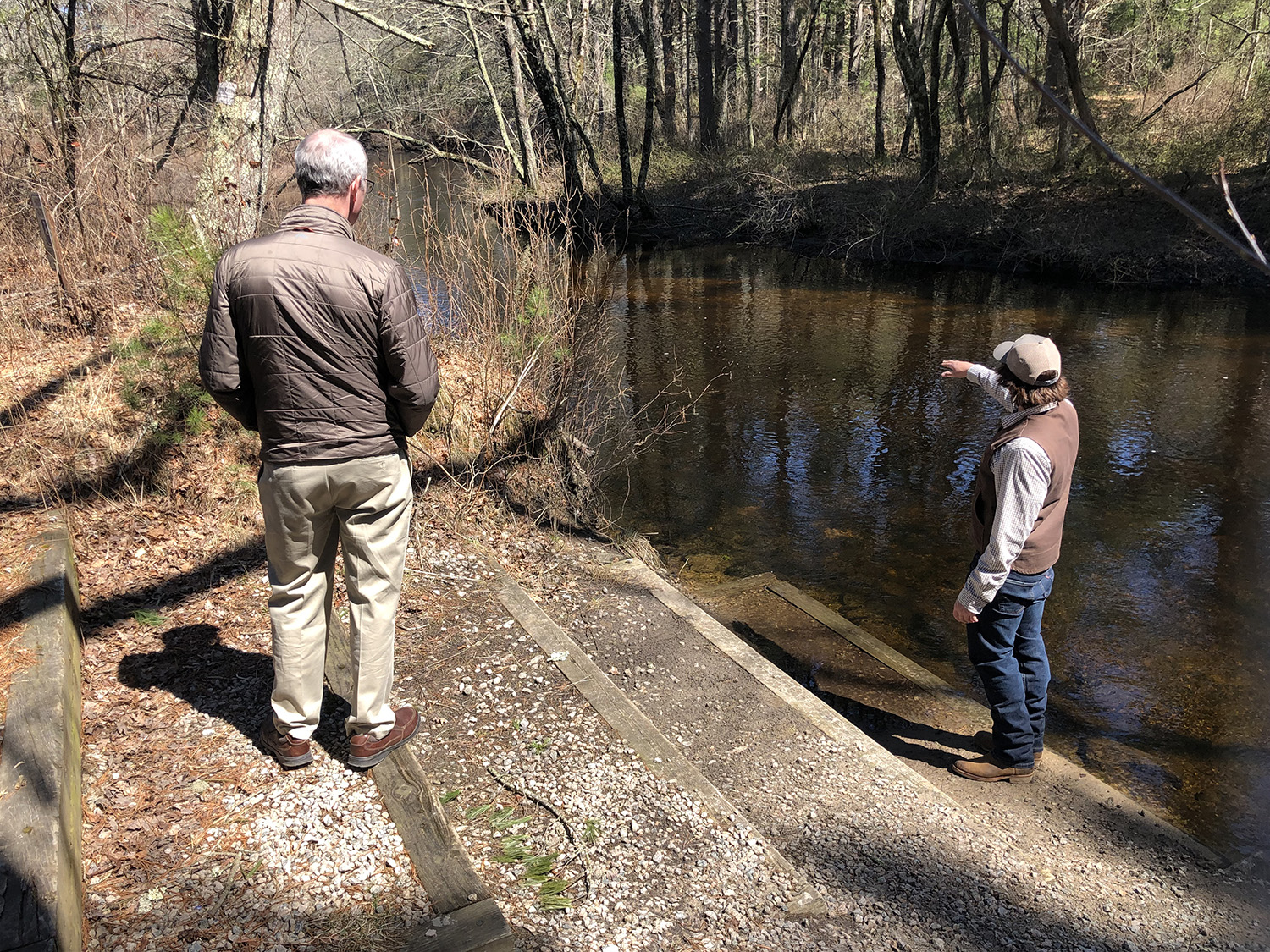 “You ain’t gonna learn what you don’t want to know,” wrote the poet Robert Hunter. For generations, man used resources right up to the dull thud of collapse. We made our spoils vanish easily into any waterways. We ignored what would later be obvious. We didn’t listen to great minds around us. Think Rachel Carson, Aldo Leopold, Gifford Pinchot.

Walking along a bank he’s chronicled steadily eroding from cleats and kids, Brian remembered how the stream bed was once six feet deeper several years ago. Money can’t buy the kind of knowledge he has amassed. Standing idly above a partially sunken, bent maple midsection, a tiny, perfect two inch young of year trout drifted over a single tan leaf, swirling lightly in a now midday sun. 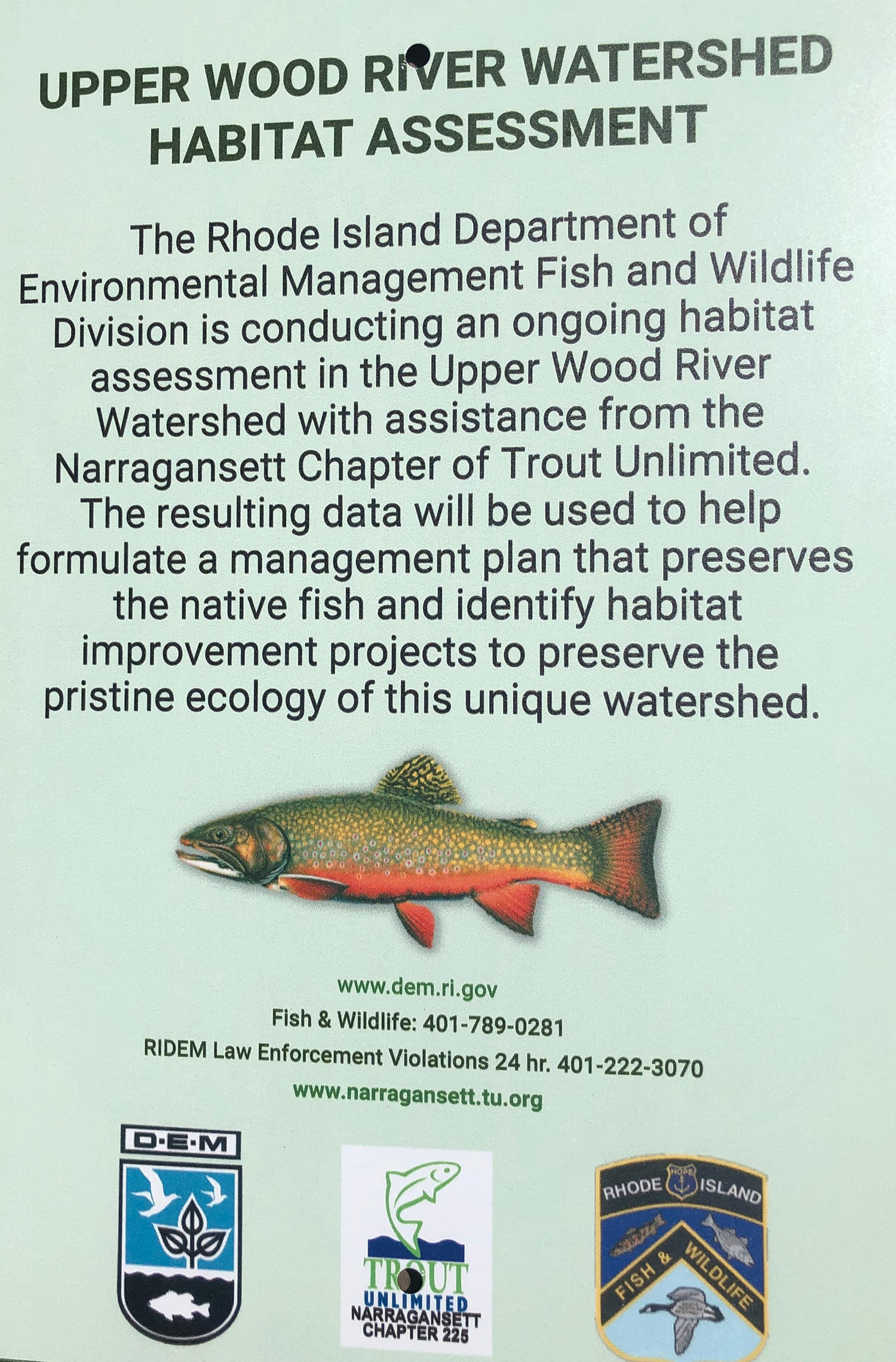 New signs will help anglers understand how significant native trout are for The Wood.

New signs will help anglers understand how significant native trout are for The Wood.

Corey spoke of small tributaries where “isolated contributions” might support brookies clinging to thermal refuges for survival in a summer’s heat. Those populations of fish are precisely what PRIBT was asking and eventually demanding be recognized and protected. Now it’s happening because a love of water brought everyone together.

Fishermen have so much in common.

That Saturday began a reversal of fortunes and perhaps futures for the Wood.

All the right people saw how beautiful it was, how it needed freedom from an agrarian past which ignored consequences and how we have so much to learn from it, which was what Brian was saying all along.

It was a good day for the river indeed. 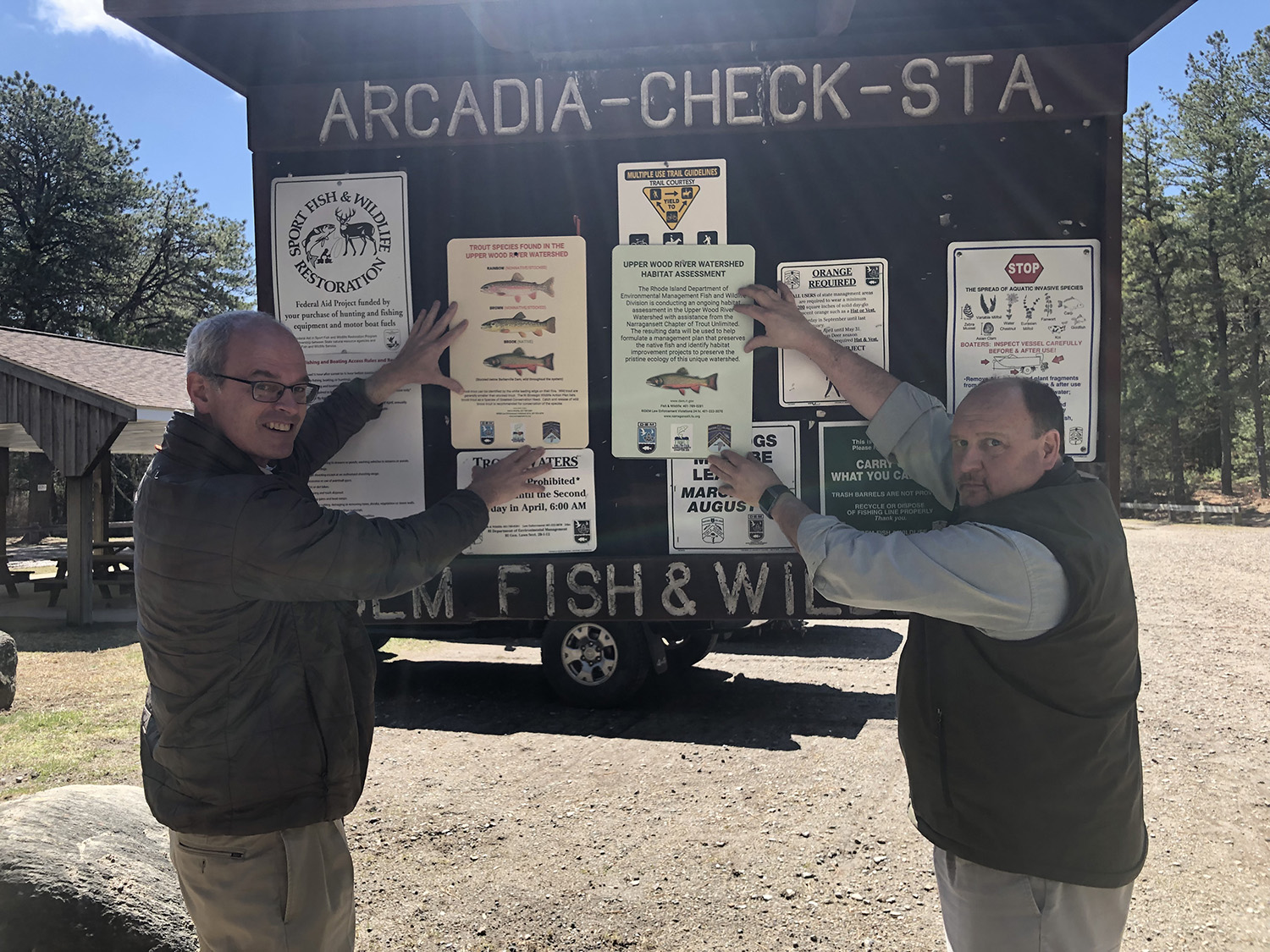 Fast forward two days and politicians and conservationists celebrated the river again with The Wood-Pawcatuck Watershed Wild and Scenic River Act’s approval. Given the current evisceration of the Clean Water Act as a means to facilitate fossil fuel pipeline expansion and rampant disregard for protecting Nature which nurtures everything downstream, its designation was a welcomed cause for celebration.

This is the first river system in Rhode Island to earn this title.

The Wood Pawcatuck Watershed Association, The Nature Conservancy and others deserve great credit for pursuing and attaining this significant achievement. Everyone downstream is thankful for your efforts and passions. 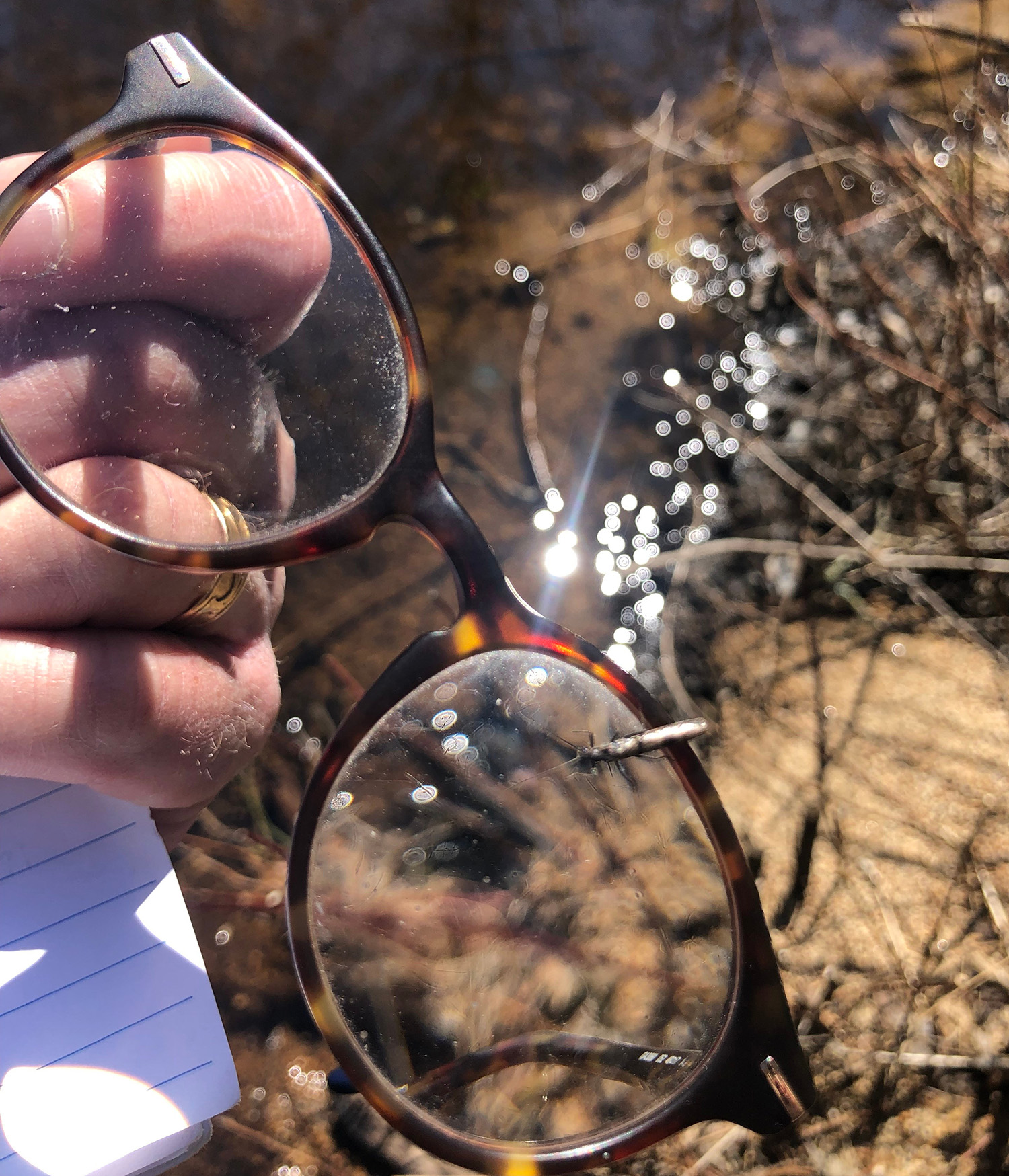 The glass is indeed half full, of stone flies.