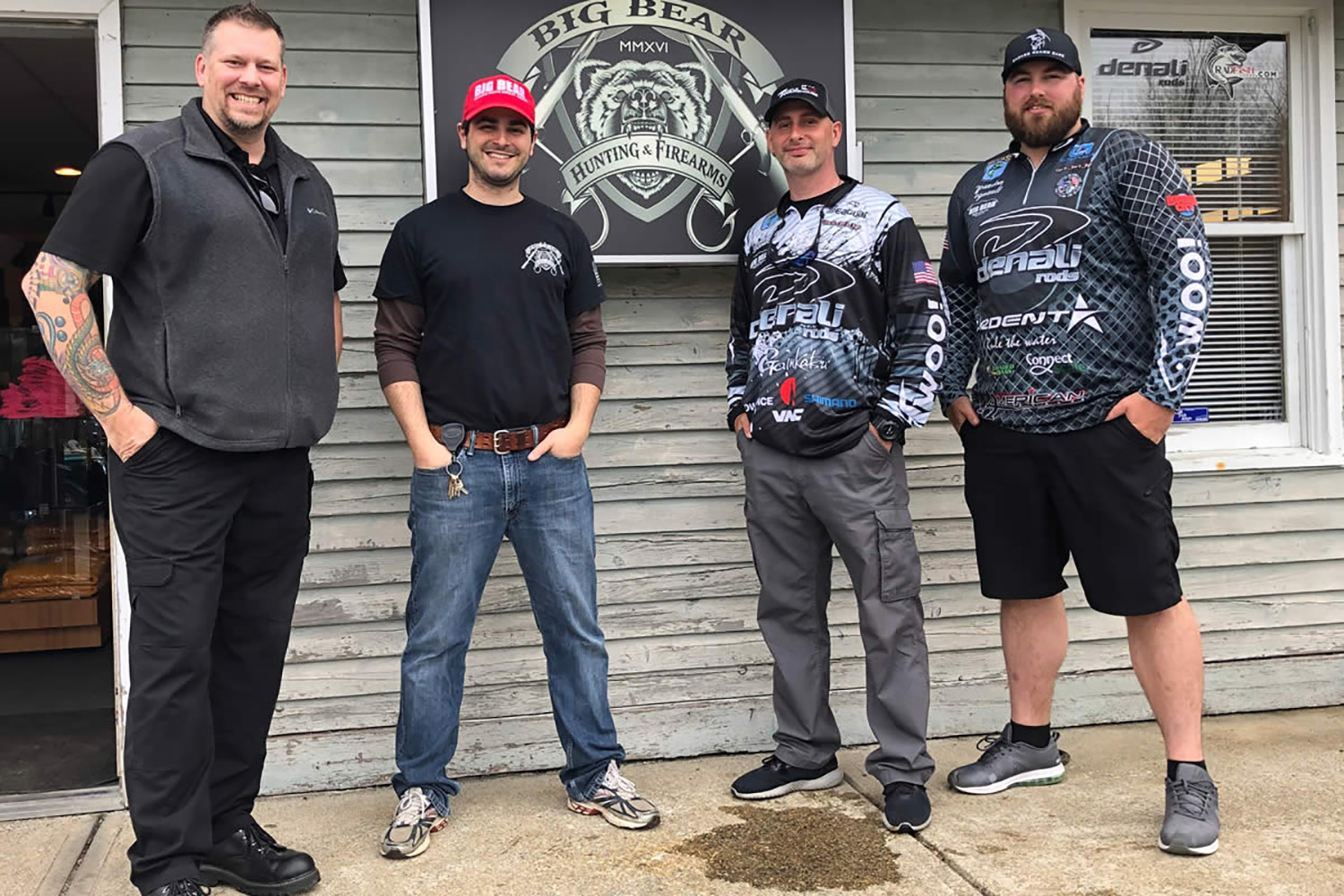 Fire can destroy everything as it tears through roofs, walls and hearts. What fire doesn’t always do is destroy the human spirit and the shared passions to rebuild.

When Big Bear Hunting and Firearms in Harmony burned in January of 2018, the building was left in tough shape and save for some firearms and ammunition, the inventory was largely lost but hope was not. Owners Will Worthy and Andre Mendes regrouped and rebuilt. Sixteen months later they were celebrating a new larger space, a host of new products and a supportive, faithful raft of customers.

A few Saturday’s ago was their Spring Cast Off Event to celebrate business, suppliers, customers and success and it was a busy day with fly rod casting lessons, pulled pork, games for young fishermen and a few big name reps. The shop is now twice as big as it was after they moved in post-fire. One side is lined with long guns, knives, ammunition and glass cases full of pistols. They deal with lots of AR parts and sponsor a popular AR nights for people who prefer to build their own. The other half is dedicated to fisherwomen and men.

“We had customers helping us rebuild a year and a half ago,” Will Worthy said. Will’s a big guy with a big old school microphone tattooed on his right arm. He was eager to talk progress and expansion as he dangled an Uncle Joe’s football-style jig in a fish tank. 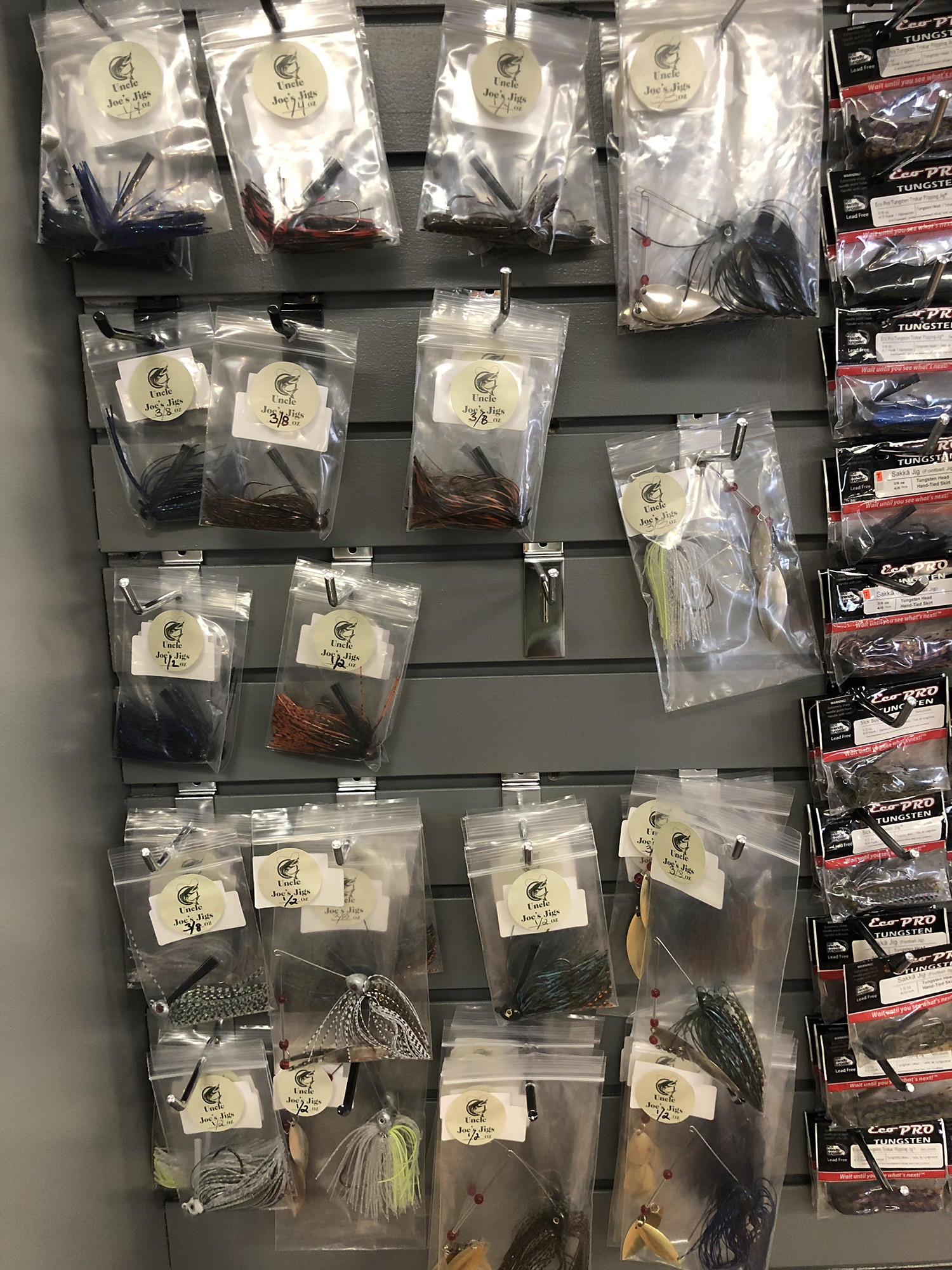 Uncle Joe’s jigs, stocked and ready for you to take a few fishing

If you’re not familiar, Uncle Joe’s are the hand poured creations of Johnston’s own Guiseppe Andreoli. Guiseppe has created a niche jig with the most amazingly natural jig actions you’ll ever see. Big box stores can mass produce anything to feed consumer demand but leaning over a glass case to handle perfect 3/8  and ½ ounce swim jigs, poured, painted and skirted at his workbench, you can see clearly where quality is everything and working for quantity is not. He offers football heads and chatter baits in several color patterns and they’re all crafted with the same amazing detail.

Guiseppe smiled when asked questions about his craft, which is amazing. He smiled when asked if sales were good. He smiled while telling of his color options for even the most discriminating bass fisherman. Go see one in the tank and then pick the color for your water conditions. Guiseppe will smile when you tell him about all the bass you caught.

“We got into, what you would call a niche style,” Will said as he showed off their shelves of fishing gear. Big Bear has a fine selection of all the biggest names, like Whopper Plopper, Heddon, Al’s Goldfish Lure Company and Odin. Jeff and Mandy DeBuigne, owners of Al’s, drove from Maine just to support them. Will and Andre also have bees out back. Andre handles the job of beekeeper; honey is available on the counter and if you’re in the southern part of the state, it’s available at Roch’s Market in Narragansett.

“We’ve had a lot of growth from last year to this year,” Will said. They stock a big run of KrankdUp Custom Lures hand painted by employee and touring bass pro Brandon Regnault. Brandon’s another big guy with a fine touch for airbrushing surface and diving lures to target multiple species. His paint schemes are so fine and subtle for their detail but spot-on with overall matches to species patterns. It’s tough to break into the current lure market with so much competition, costs of distribution and the crushing discounts big retailers demand from their suppliers. Brandon’s lures stand out in a crowd of freshwater offerings because they are beautiful, because you can see the painstaking details and because he uses them and they catch fish. I purchased his River Vole Topwater Wakebait and will give it a serious work over this month.

Both his entries were landed with his own jerk bait. 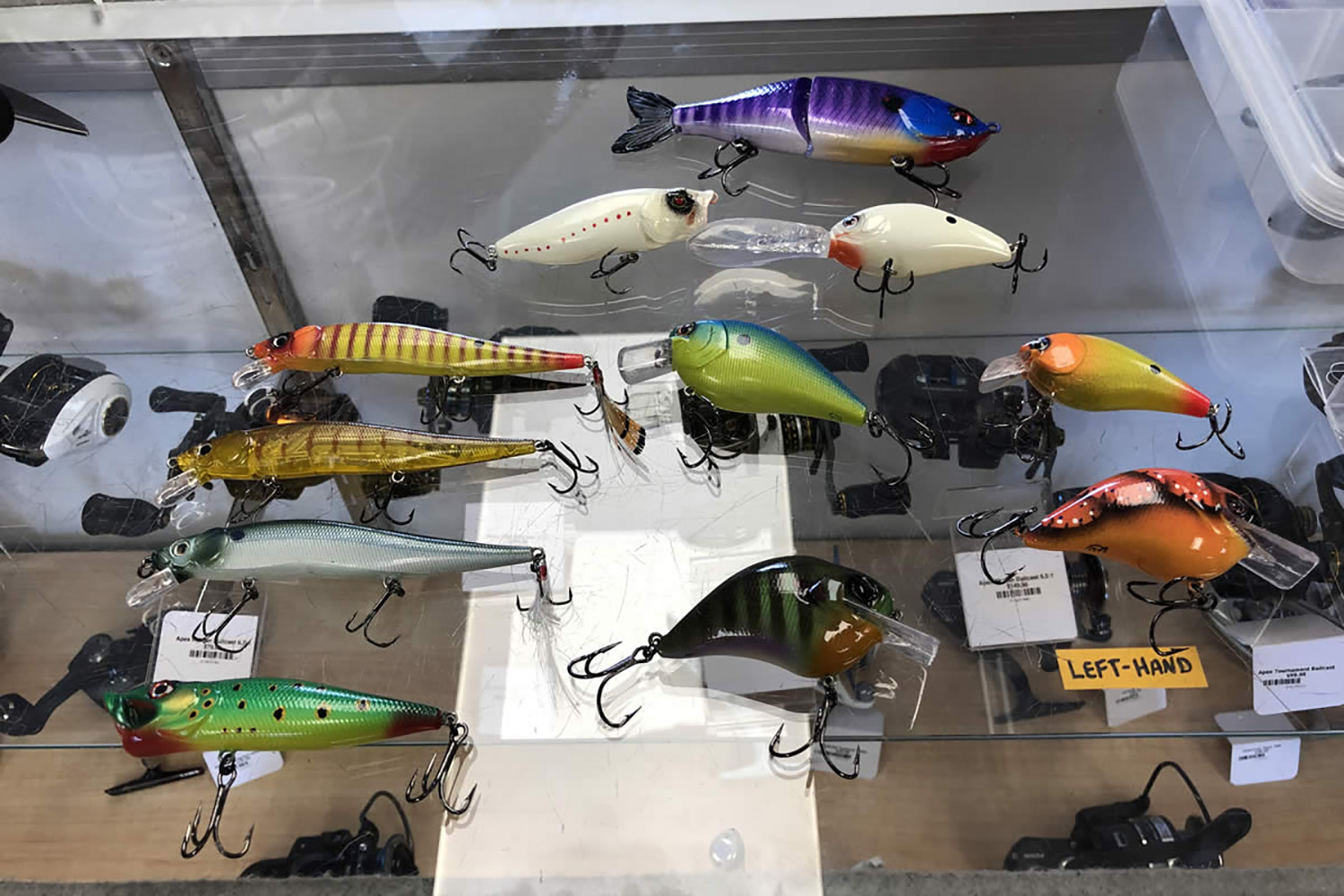 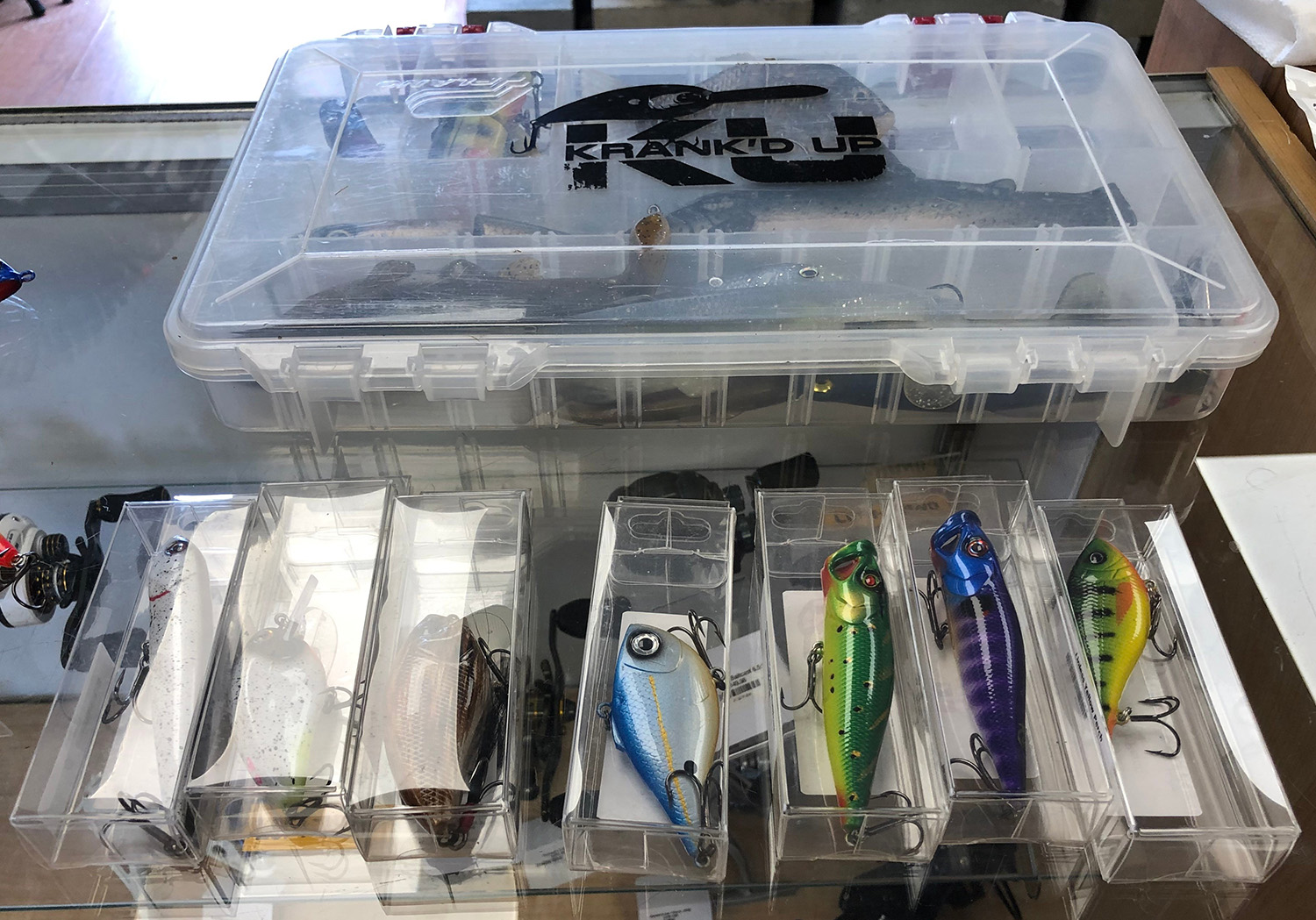 Krank’d Up lures. So sweet…

“People get their coffee and come here in the morning,” Will chuckled, because that’s the business they’re building.

Anyone can sell a Tiny Torpedo but it takes a collective of motivated and experienced fishermen to offer customers how to throw, retrieve and catch fish with it. As a young fisherman approached the counter asking for some shiners, Guiseppe stepped right up to engage with the young man, asking what he hoped to catch and what size shiners he needed. Big Bear is a great resource for sportsmen who enjoy access to Smith and Sayles Reservoir and other ponds the north country is fortunate to enjoy. Personal attention rules the day at Big Bear Hunting and Fishing because nothing beats passion for what you love the most and sharing it with your friends and customers. 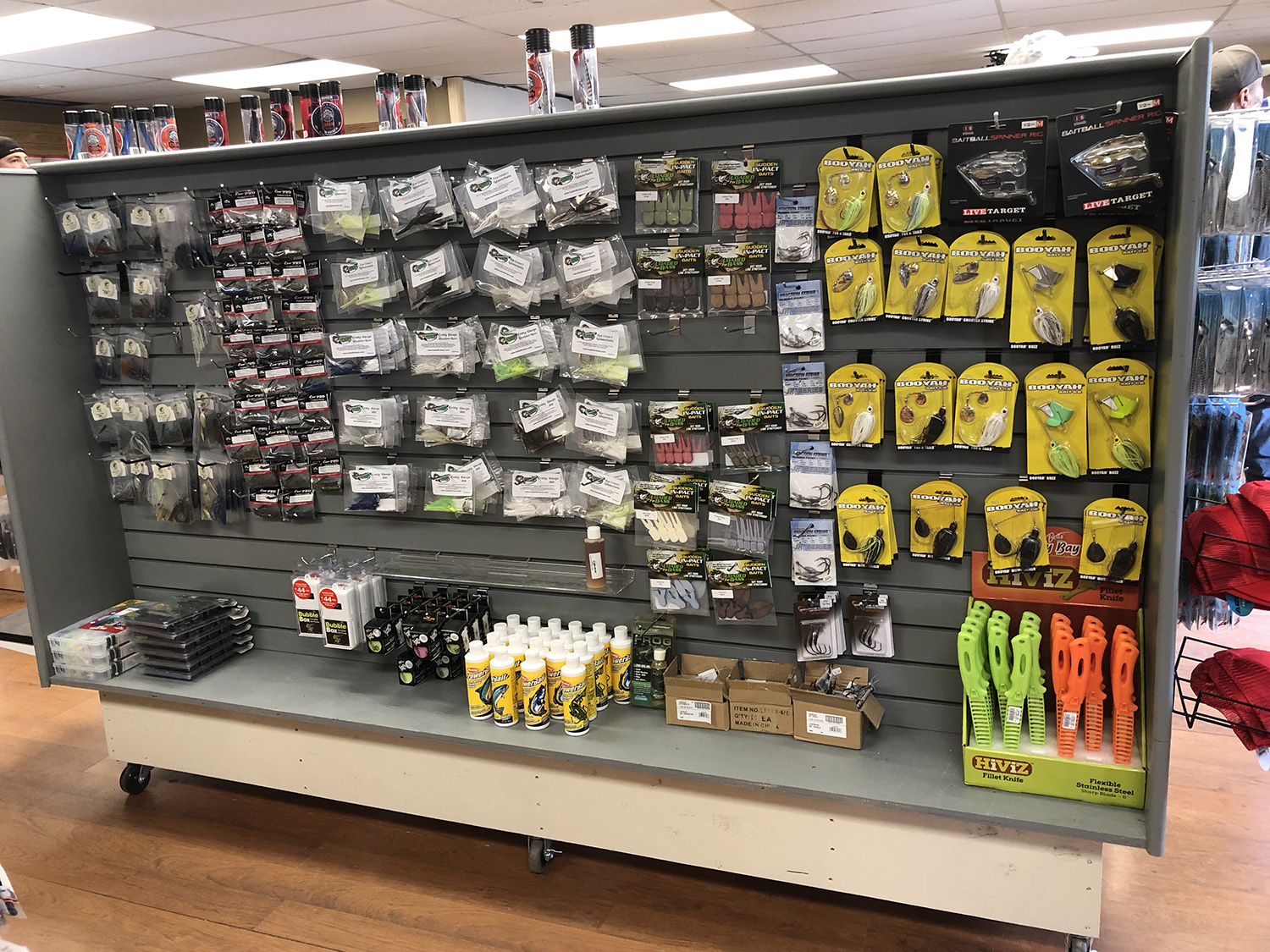 This just in…Brandon and Guiseppe fished a tournament the next day at Lakeville, Ma.’s Long Pond in pretty miserable conditions. Brandon landed two nice bass and Guiseppe landed a lunker 4.2 pounder on his own Uncle Joe’s rig for a total of 7.61 pounds.

It’s pretty clear those two already did the serious workouts and their lures are proven fish finders.