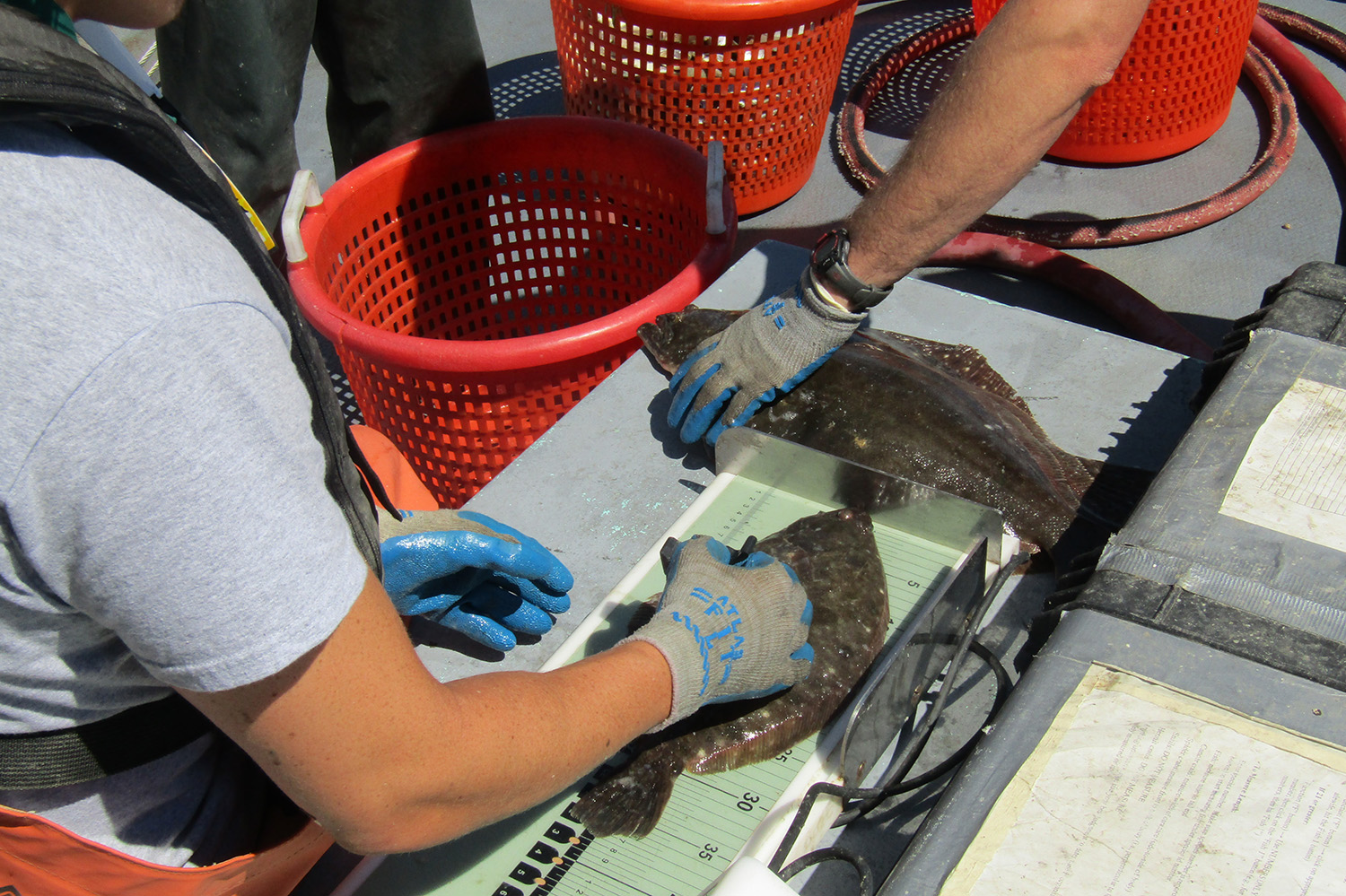 In preparation for a return of striped bass and regulations to protect them, RIDEM held a pre-hearing workshop to discuss potential changes. In an era of social media fueled easy complaining, these workshops are a direct action of the state listening to people say they can’t attend the formal hearing, are microphone shy or just don’t understand enough about whichever proposed changes to risk speaking up. The result is a regular series of off the record meetings where people can ask questions, listen to others and generally sit back and get a lesson in the regulatory processes. The first workshop focused on species other than striped bass, like summer flounder, bluefish and tautog. This night was all about our beloved stripers.
In anticipation of a high number of potential attendees, which historically has been pretty low, the meeting was moved from URI’s Bay Campus cozy Hazard Room to Corless Auditorium. With more than 47,000 license holders in Rhode Island, approximately fifty fishermen made the drive to Narragansett.

It’s always a bit confounding why so few people attend hearings and meetings, especially when our supposedly beloved striped bass are on the menu but that’s just the way we roll. 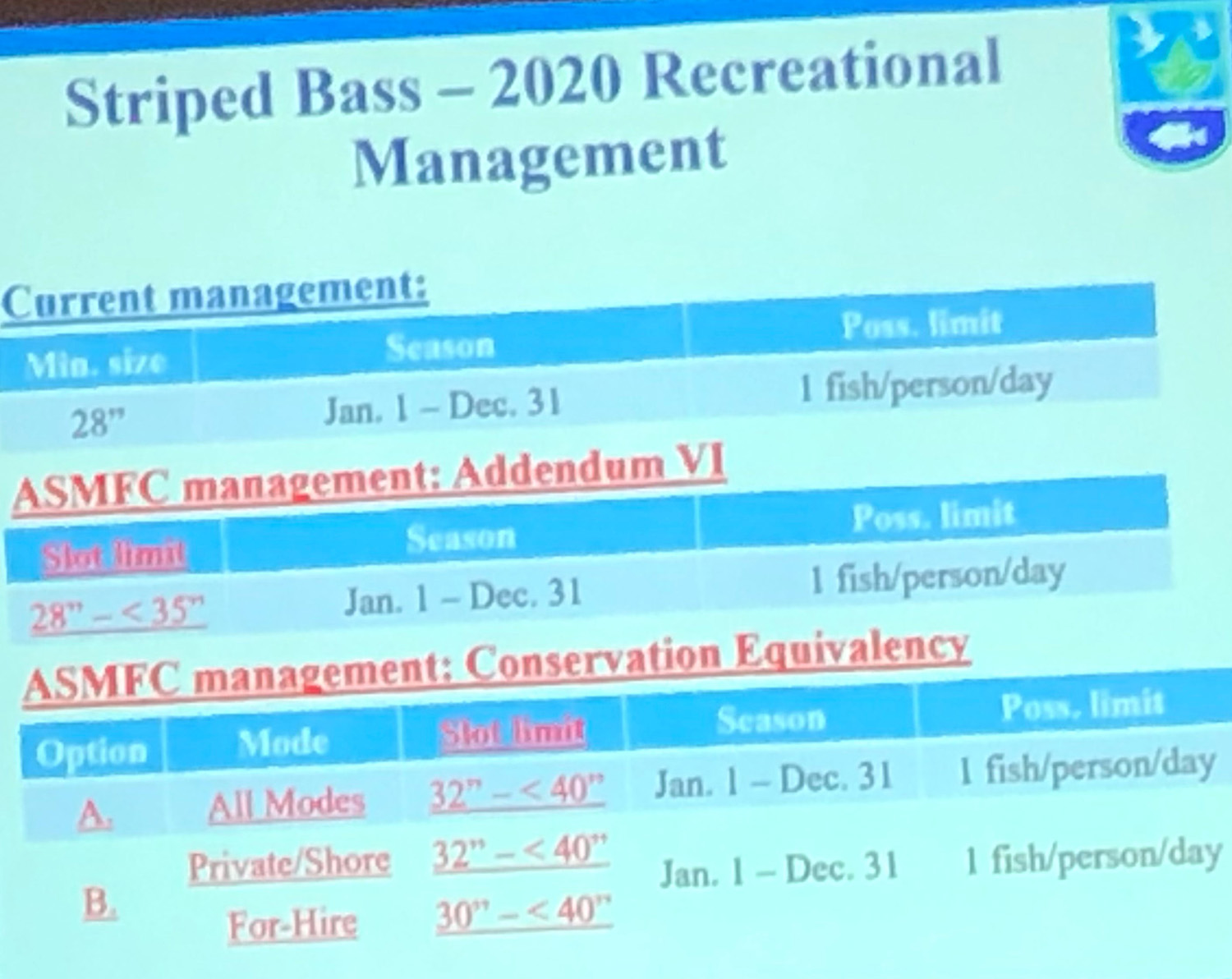 It’s a long road, from data gathering, numbers crunching, proposals and hearings to enactment and enforcement so these workshops are a valuable and welcomed off the record session where the few who attend get to ask questions not solely about proposals but about the process itself.
Despite strong recruitment years in 2012, 2015 and 2016, the stock status is still concer 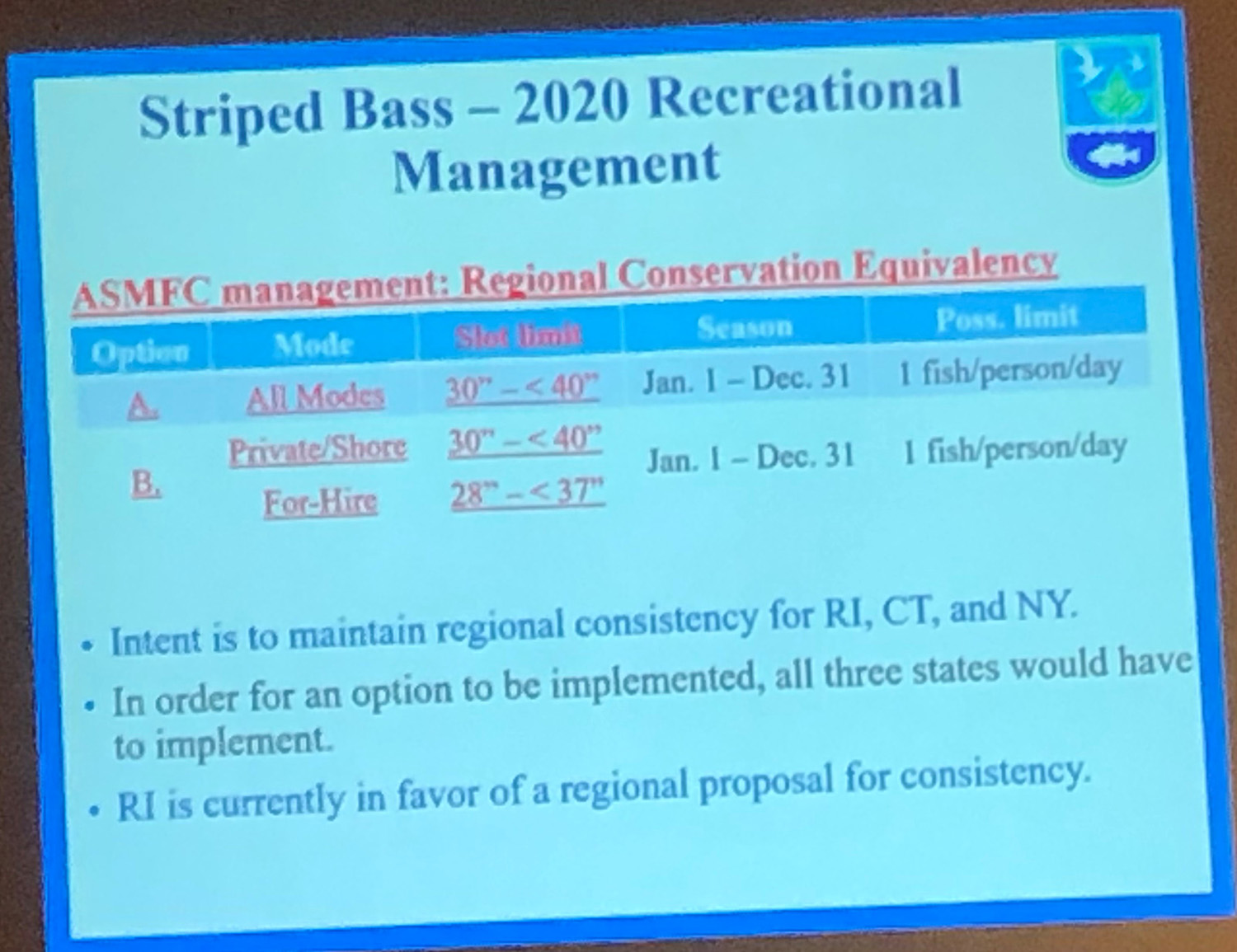 ning. The ASFMC finally acknowledged the stock is overfished and overfishing is occurring. All that number crunching was supposed to prevent that. A major concern is also the council’s estimation that 9% of bass released after being caught end up dying anyway. That discard mortality is part of the reason we, and the bass for that matter, are facing an 18% decrease in landings and mandatory circle hooks to protect the population, the latter having been delayed until January of 2021 to give fishermen a chance to learn how to fish with them and tackle stores can sell out of their stocks of treble and J hooks.
One concern is that if Rhode Island, Connecticut and New York don’t have consistency in their plans, the specter of conservation equivalency appears. That’s a concept where one state can meet the mandates of increasing a spawning stock biomass or meeting mortality reductions by means other than recommended by the government. In a perfect world, they get two states to the same place by the end of the year but in reality, in practice, they’re more prestidigitation and delay tactics than effective alternatives. As one very astute tackle store owner mentioned, allowing one state to fudge the regs for a fish that’s migratory through several other states does not achieve the goal and does affect the other states. We all know what happens when one state has a longer season or shorter size limit than their neighbor. Rhode Island is in favor of a regional proposal for consistency. Steve Medeiros, President of the Rhode Island Saltwater Anglers Association spoke that his organization also supports a three state system for consistency. 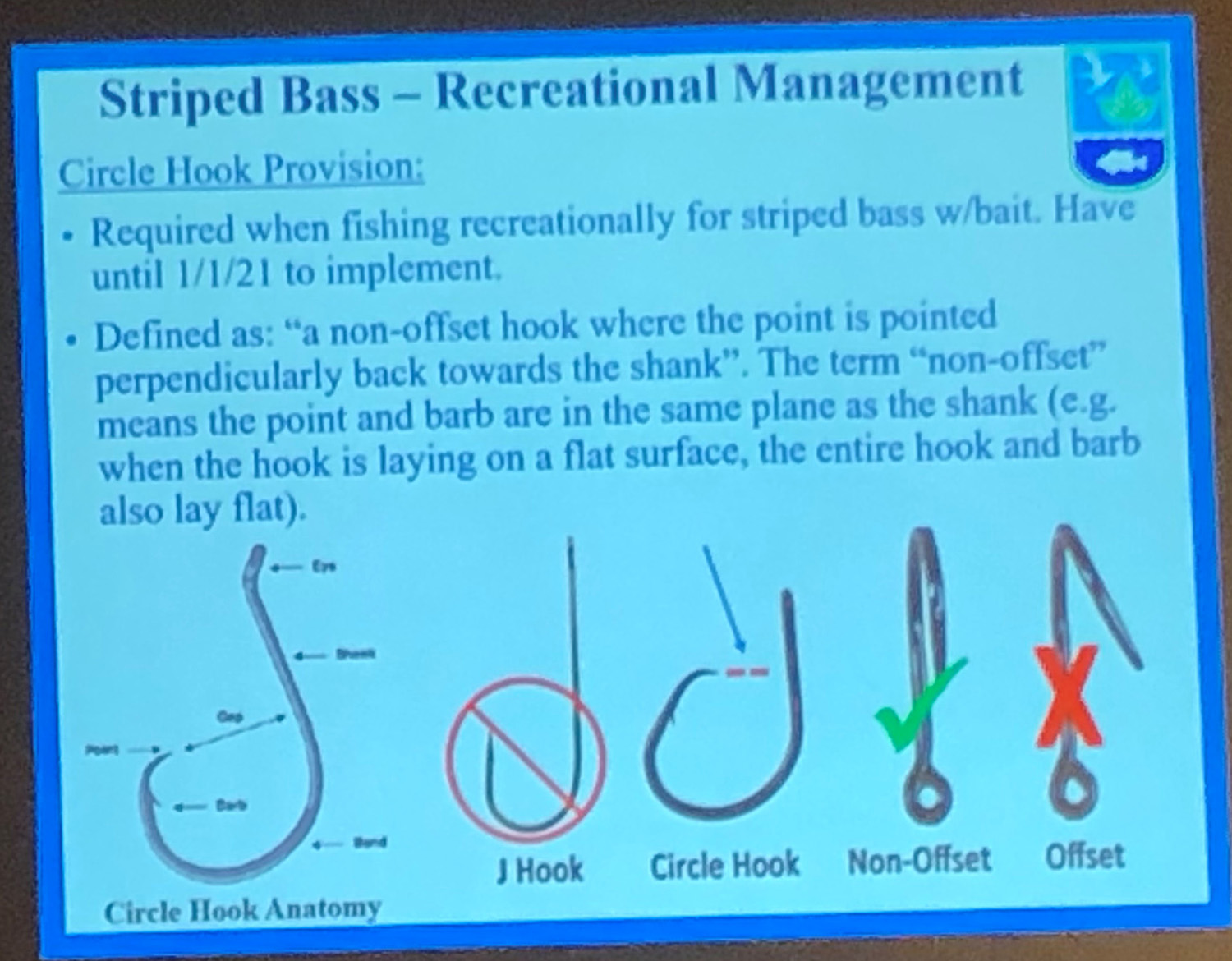 For background, striped bass fishing mortality was estimated to be 0.31 in 2017 which is below the mortality threshold of 0.24 and the mortality target of .20. Additionally, “In 2019, the MD year over year survey indicated a lower abundance relative to the previous two years.” Peter Jenkins, who is spearheading the newly formed American Saltwater Guides Association, has been preaching abundance from here to Washington because abundance benefits fish, fishermen and businesses who rely on both.
Here are the meat and potatoes.
The new proposals call for an 18% reduction in striped bass mortality in both commercial and recreational fisheries. Commercial quotas will be cut and recreational anglers will face a slot limit and the circle hook provision. For recreational fishermen and women, it will still be one fish per day but instead of the 28” minimum, there may be a slot limit of 28” to less than 35”. One conservation equivalency proposal would be a 32’ to a less than 40” slot limit or 32” to less than 40” from the shore or private boat and a 30” to less than 40” slot for charter boats.
Rick Bellevance of the Rhode Island Charter Boat Association spoke in favor of “the biggest slot limit possible” adding, “it’s pretty clear the charter boats don’t really throw a lot back. That’s the best for the fish.” He did not elaborate how taking the largest fish possible, which are recognized as the breeders, benefits the population. We’ve done the math several times over the years of how many keeper sized bass can be “removed” from the fishery over the summer by charter boats but what’s important here is rebuilding the stocks. The striper mess is not the result of one group or another but we all need to fix it.
One fisherman asked, “How long will this slot limit situation exist?” That’s a brilliant question since slots are relatively new management concepts and they often don’t work. “This would probably last a couple years,” answered RIDEM biologist Nichole Ares. It may take longer to rebuild the biomass but the slot limit can address the 18% reduction in a year or two.
“If you really want to conserve fish, are you telling me it’s OK to take a bunch of twenty pound fish?” asked one fisherman who said he had been fishing for forty years and that this was his first meeting. A few back of the house fishermen asked if RIDEM Law Enforcement could handle this law change.
“This isn’t about the fish; this is about the economics, to keep everyone happy and in business. It’s about the money,” one fisherman added. It’s a valid concern that releasing lots of smaller fish on your way to a 32” fish will result in lots of mortality. Regulations are a complicated business and RIDEM encourages people to submit ideas or proposals to them ahead of workshops so that staff can have time to address concerns or prepare answers.
The official hearing will be at Corless Auditorium on Monday, February 10 at 6:00 p.m. The hearing will cover all species including striped bass with both commercial and recreational management plans. See you there.

Do you like to party? Do you love fishing for tautog? Do you enjoy supporting local community charities? Do you dig food trucks, fishing, prizes, raffles, talking about fishing, live music, bragging about fishing or gesturing to show how big your blackfish was while...
Keep Reading

There’s much to learn from three veteran fishermen

As a bluebird Saturday drew fishermen out to tear off shrink wrap or frantically start organizing gear they should have combed through while it was snowing, the Kayak Centre in Wickford was packed. Randy DeGrace, Ian Clark and...
Keep Reading