Block Island’s empty roads and fields full of deer attracts a few hunters each year. Everyone says it’s so easy to get your deer over there but the “off season,” so called, which isn’t actually a thing anymore, can be tough because the place is a mad house of distractions. Winter is the island’s social hour; beaches are clear, sand flats are full of clams, islanders can get to the post office more than once a week and there’s a seat waiting for you at McAloons’s Restaurant and Bar. Even just that makes it difficult to settle into the edge of a wet grass field and concentrate on the business of hunting.
The locals are rough. “I could have shot three from my truck on my way here,” is a common admonishment. Better still is, “How could you not have shot one yet? I just saw seven from my bathroom window,” which raises an important, distracting issue. The island is rife with similar yarns, about how islanders used to get themselves a deer, mostly from kitchen and bathroom windows. That’s what you hear when you return from three hours in a blackberry patch after not shooting a deer and order a sympathy beer with your fingers and eyebrows torn to shreds.

“Sure Capt., that was the way it was,” one old islander told me. “I got me a few from right there on the throne. Trick is you need to keep your gun within reach. Not loaded, of course. That could be bad,” he said, sloshing around a nearly empty glass of pilsner. There are several images associated with those words which will not erase easily.
These stories are hearsay, of course; no one in their right mind would fire off a round from a bathroom when hunting in the wild was so easy but they make for great tales while you’re waiting for your salmon BLT and a beer.
You’ll die of thirst on the island waiting for a sympathy beer. 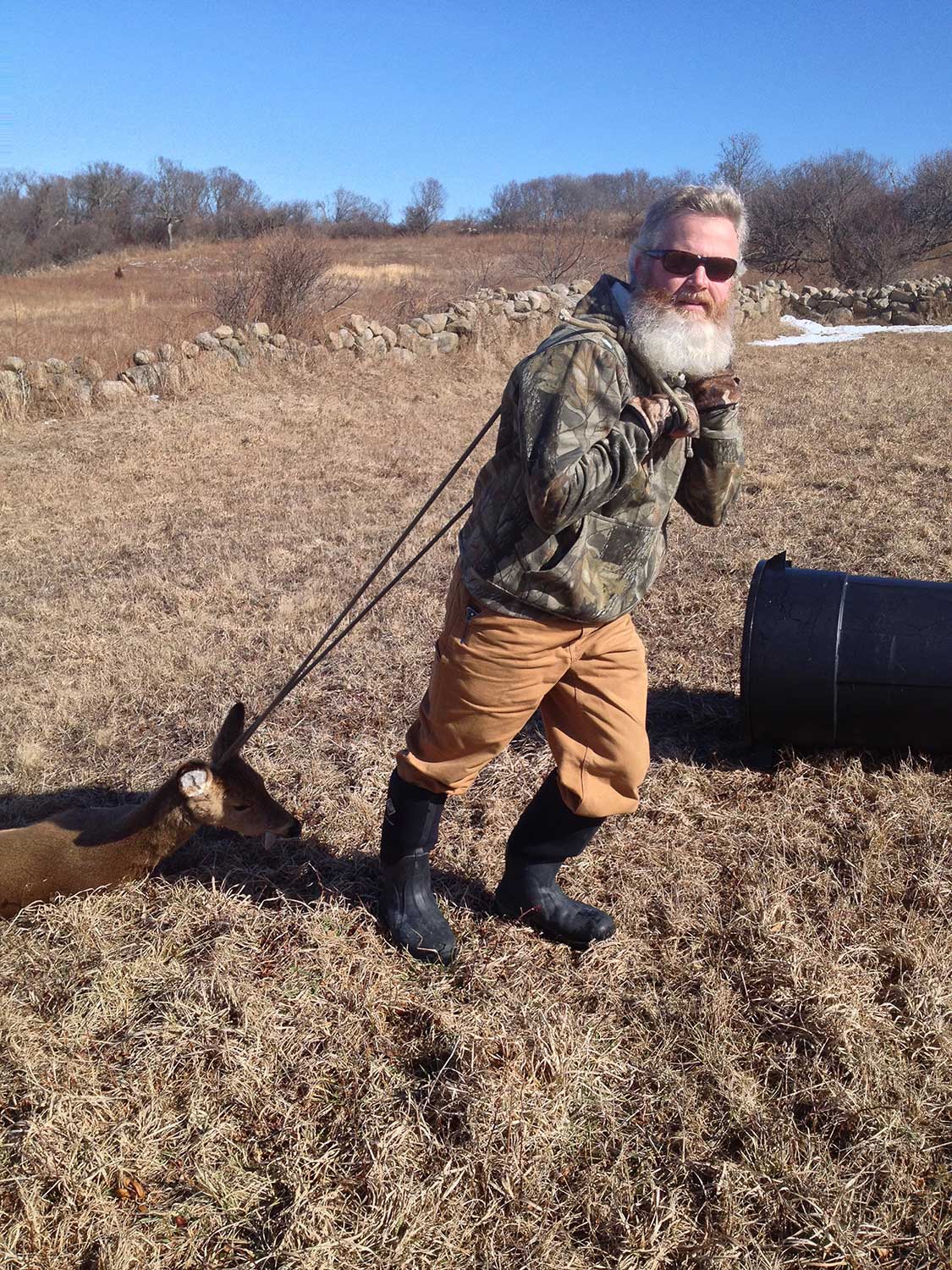 It’s too noisy. The whole place is full of ducks quacking for no reason, geese honking overhead and crows crowing, all of which clearly are Nature’s way of alerting deer that there’s a drowsy guy with a gun hunched behind a stand of bayberries. And then there’s the airplanes. The island sky needs a traffic cop. You can’t go more than five minutes without planes blasting over your head making it impossible to hear deer running under your tree stand before jumping a stone wall to freedom, while you were looking up.
It’s too confusing. Deer hunting on the island can happen two ways. One is you drive to properties on which you have permission to hunt, look for deer from the truck window then move on if no one is home. If you see a few, you throw it into reverse then walk in under stealth mode and hope to get a shot. The other is to park yourself on a piece of land, check the wind so that you don’t alert an entire herd to the smell of your camo suit your loving wife washed then finished with extra perfumed dryer sheets, and wait. And wait. And wonder if you should have stayed in the truck.
Non-hunting islanders think because they see deer so often that you can just whistle them into your freezer.

“Well, I saw twelve while I was driving down Corn Neck Road this morning,” one woman told me.
“Hunting can’t be that hard,” she finished. It’s humbling to be admonished by a stoop shouldered retiree leaning on a shopping cart when you’re covered in lavender smelling camo, waiting at the grocery store coffee counter after two hours of standing motionless behind a spindly shad tree the width of your belt. 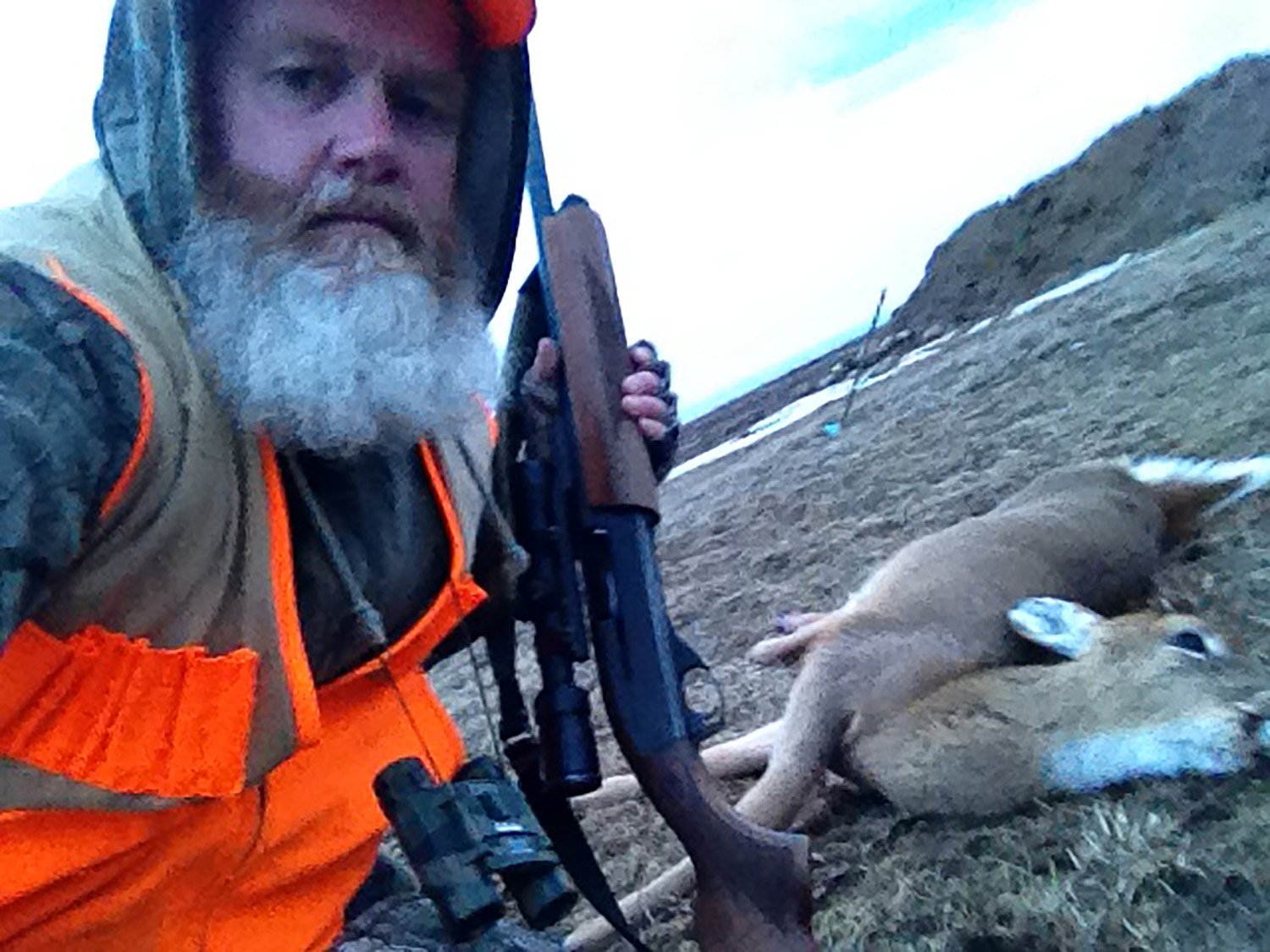 It’s hard to find deer if you’re from away. Seeing deer and shooting deer are different animals. Because deer eyes have more rods than cones, bright lights often force them to freeze, which is why you can see a baker’s dozen on the way home from the pub but once you climb into a tree stand nestled in the crotch of a shad whose limbs couldn’t support an acorn, deer are clearly in charge .
The islander advantage is too strong. They know all the best spots, who lives where and where deer like to hide in plain sight. They watched paths all summer, listening to summer folk complain about gardens chewed from the roots up and know how to wash their own camo pants.
The numbers and estimates are all wrong. Back in the day, islanders went to Sam Peckham Inn on Groundhog Day, had a pint with Lew Gaffett, then signed in for the unofficial census.

Lew  himself in a picture from the Block Island Times

At day’s end, we knew how many people were on the island and called it good but deer population estimations vary from bar stool to bar stool. Some insist there are one million roaming the bush, mowing down more grass in one season than Glenn Hall could manage in a lifetime while actually no one says there are less than that. But that’s hard to prove.
If you didn’t get your deer on the island this year, next year go for the clamming and salmon BLT.
You won’t have to wait around for that sympathy beer.