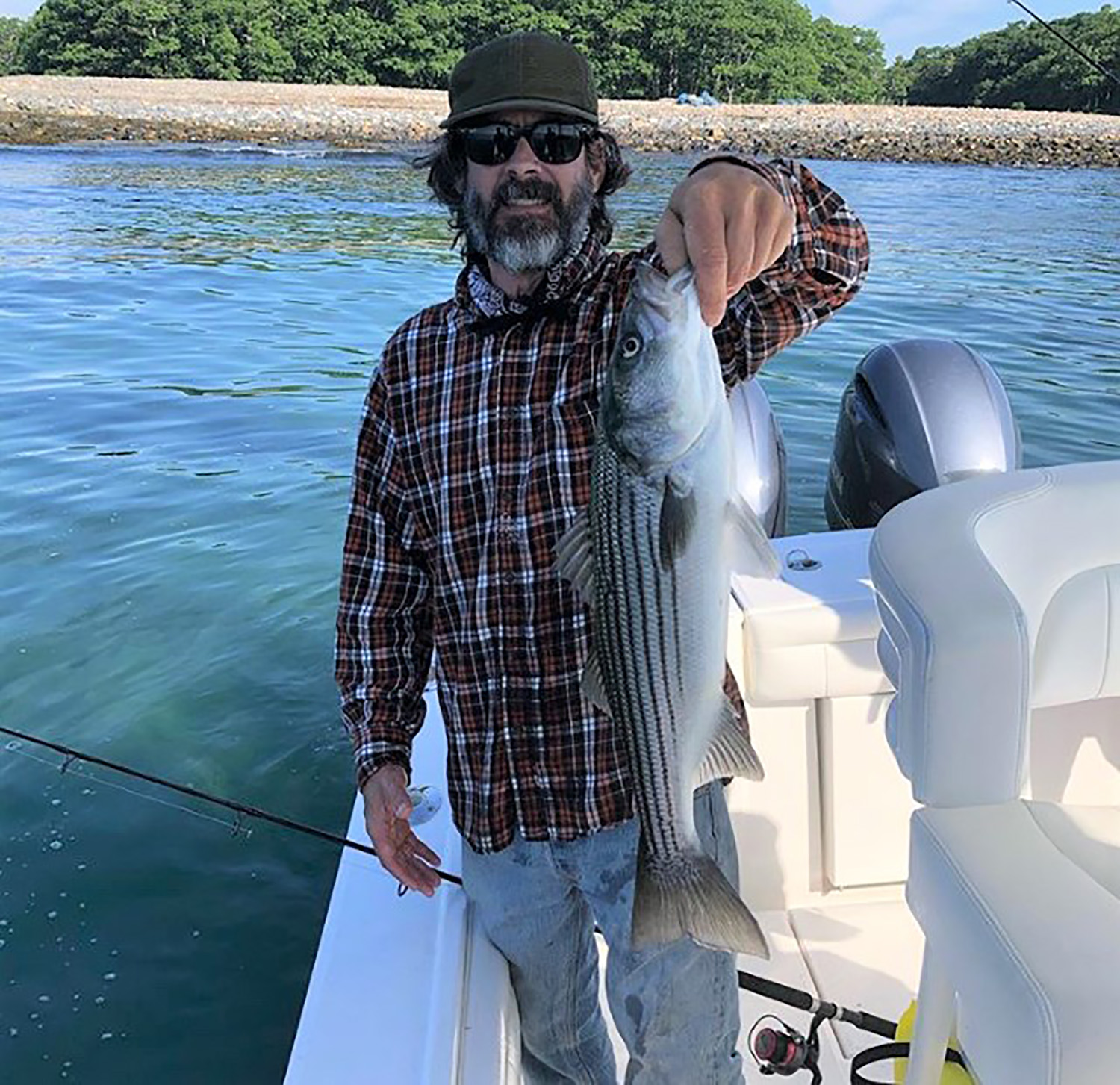 With August rolling right along and water temperatures rising to low seventies in close and to nearly 78 offshore, fishing remains strong. Bigger than slot limit striped bass are hanging all around everywhere and if you can be patient, Hexagenia mayflies are dancing on the Wood where it’s cool to be trout fishing.

This would have been its 16th year but Covid concerns have cancelled yet another get together and this is a real shame. Jeff and the other directors have worked quite hard over the years to build one of the region’s most popular kayak fishing events but since most everyone is gun shy about getting too close and many of the anglers also camp out before and after the shootout on Winter Island, where camping has already been reduced, those combined concerns were just too much of a risk. Even if they did take the risk, considering one of the joys of fishing from a kayak is a natural separation from other anglers, they would not have been able to hold the banquet and raffle. We’re all dealing with this social distancing and new normal business and while no one should argue with this tough  decision, this one hurts.

“Stay well and thank you for your understanding,” Jeff wrote in a social media post.

The striped bass bite is holding steady. From Southwest Ledge to The Ditch, to southern Maine, where Capt. Jon Fischbein (above) is finding legal sized bass in 65 degree water, an abundance of bait is keeping stripers in close.

Captain Ray Stachelek has been cruising around Block Island for fun and business and, typical of a true gentleman angler, offering real-time marine and personal details about where he’s catching and releasing. Here’s a piece of a recent report: “Fishing Block Island, 5:30am – 2:00pm-Tide/Moon Phase / Height – Low tide at 5:00am, incoming all morning. Water Temperature / Wind / Direction – 69 degrees, south east at 5-10 mph. Wave Height – 4 foot rollers, choppy in places. Water Clarity – good. Bait / Bird Activity – sand eels down 10 feet to bottom. Terns and gulls working the surface. Fishing Pressure – only a few boats. Fog most of the morning, thick down the southern end. This is the earliest I’ve caught a bonito at Block Island. Had a slam with stripers, bluefish, and bonito. Thousands of stripers, nymphing the surface for most of the morning. Striper fishing was so consistent it was unreal. Nothing large, no keepers, mostly around 22-24 inches.“

When you open the paper to read about some thieves stealing stripers and out of season tautog from the fishery, you only need to read a post from Capt. Ray to remember we are ultimately surrounded by solid humans and fishermen. Thanks Capt.

Black sea bass are still hitting squid strips on albie jigs, stripers are feeding on the surface just before and right up to first light and then again as the sun calls it quits for the day. Cast those white soft plastics to the edge of a school so as not to drive them deep or cast a shiny tin, like an Al’s Goldfish Saltwater Series or Kastmaster way past them then run it deep to attract big fish holding tight for the easy meal. More stripers are showing around the east side of Narragansett as well. A few fast bonito have blown through there in the last few days so more should be on the way, if this Isaias deal doesn’t muddy the waters.

There was plenty of talk of how fishing was a few weeks delayed this year, which now is good for us since usually as we approach the dog days of August, fishing slows but let’s ignore that and keep catching and releasing. We’re surrounded by fishes.

Over on the Wood River, Trout Unlimited President Glenn Place has fished his way through some sweet Hexagenia hatches. Hex hatches make for fine days for fly fishermen and women casting for trout, especially for those elusive native brookies in cool pools below thick canopies. The Wood is a true treasure and an exceedingly rare piece of open land and water where we can remember the joys of a simple canoe and disappear for a few hours.

Watershed Association and manages its headquarters on Arcadia Road in Barberville. WPWA is dedicated to protecting the watershed, which includes approximately 300 square miles across our eastern border with Connect and the southwest section of Rhode Island. The Wood Pawcatuck has a lifeline of seven drainages, both rivers, the Chickasheen, Chipuxet, Queen, Shunock and Green Falls. What’s more, the Nature Conservancy has identified the borderlands between RI and CT as containing the last large forested track south of Boston. WPWA offers several levels of memberships and they are a non-profit as well. You can learn more about the Association, the Wood, the Pawcatuck and how to escape the new normal for a few hours at www.wpwa.org.

Short story long, the Wood/Pawcatuck offers perfect hot summer day relief with trout fishing, canoeing, kayaking, drifting, bird watching and for that rare mid-week day off, a few quiet sandbars to sit in the shade, enjoy a cold drink and chit chat at safe social distances with an old friend. We won’t be able to camp on Winter Island this year for The Shootout but we can catch a big striper right close to home, then go find some shade and look for Glenn; he’ll be on a bank watching for Hexagenia mayflies, reeling in some nice cool brook trout.

Winter, it’s been good to snow ‘ya

The last edge of winter was tough. Temperatures and winds fouled up fishing plans. It was tough hearing teenagers complaining about bringing in firewood. The wise didn't dare put away snowblowers because odds were good for one last storm on the horizon. With all that...
Keep Reading

Here come the big bass and why is Water St.’s access closed?

Don’t let the calendar fool ‘ya, meteorlogical winter is a full on time to fish, hunt, hike and tie a few flies with your feet on a cooler and steak on a plate. Read Fish Wrap to find out how you can get outdoors or hang inside this month to make the most of our newest season. And as always, thanks for reading.