Clearly, navigating a kayak in fog is easy 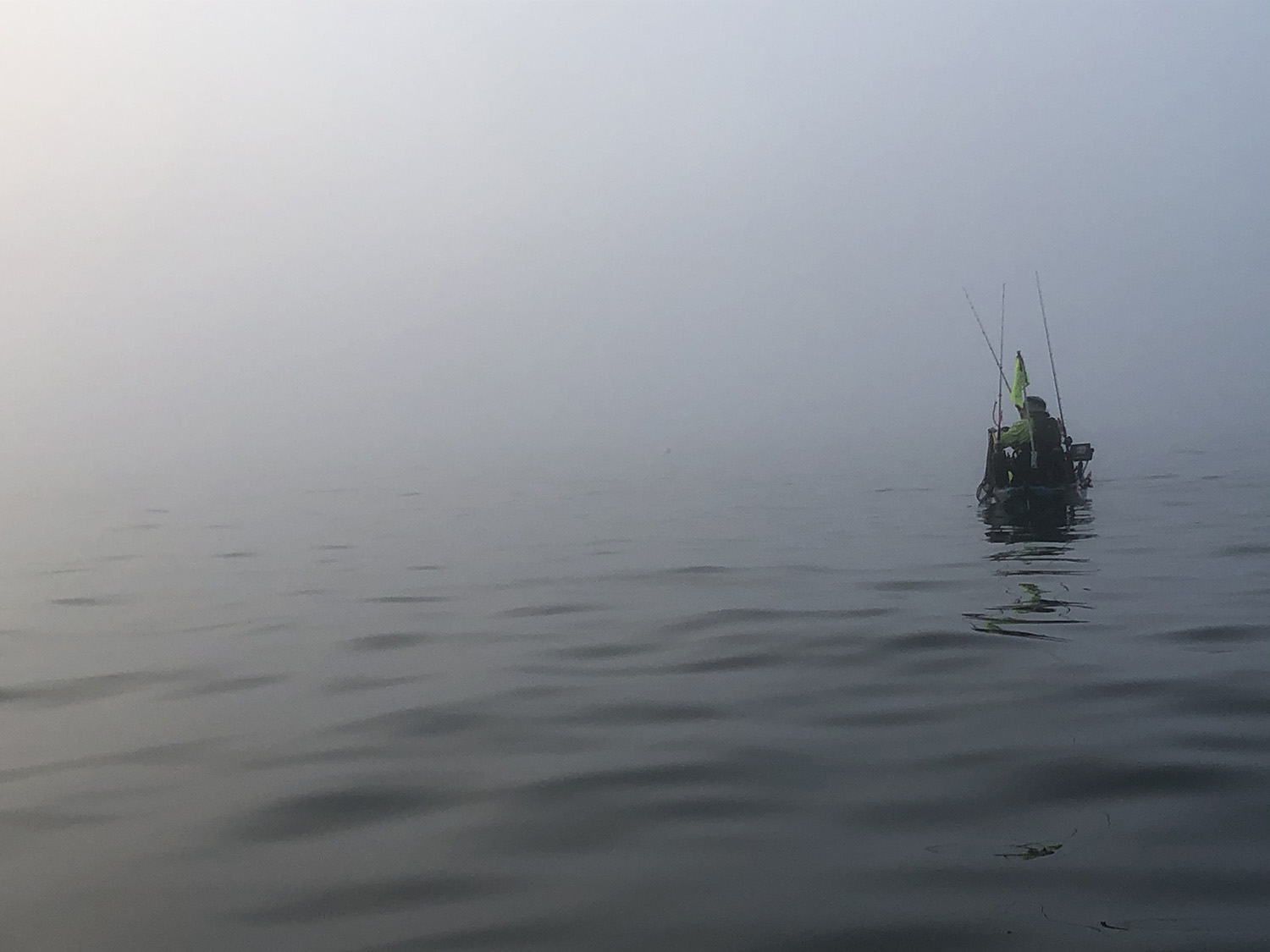 Anyone who was in Boy Scouts before that deal imploded or had parents drag them around the country in an old summer vacation van should know how to use a compass. Understanding direction is key to navigating, especially in zero visibility. Most of us have a compass app on our smart phones, which means some of us can’t actually use a compass but can access one while checking Instagram to see how many fish Noe Phommarath has landed. Recently, a few friends launched kayaks at Fort Wetherill in a dungeon thick of fog and we all caught fish then arrived home safely.

In such foggy conditions, leave the ramp with a flag and a light attached to your ‘yak. The flag gives center consoles a target, the light will help you locate your Yeti full of just-right coffee when it falls overboard going down the ramp. Then choose a direction. East or west is irrelevant, unless you’re armed with some unbelievably accurate and timely fish intel from the most recent Fish Wrap.

Regardless, start paddling. In the case of our Jamestown launch, we headed west along a ragged shoreline featuring steeply rising bottom contours. You can see them if your electronics are working.

Did I mention Kubota Steve was fishing with us? After he fixed his blacked out fish finder/GPS with a good kick and some old fashioned swearing, he was back in the pack of never-to-be-lost sailors.

“It’ll be fine. The sun will burn it right off,” Thom Houde said. Fog is a fickle thing and largely unconcerned with a kryptonite sun. This rolled around my head when Kettlebottom Rock disappeared from sight, which was unfortunate since my kayak was seven feet from its western side and it was clear as good gin two minutes prior. Fortunately, Ben Boone and Thom were staying close to me as my boat lacks a GPS system.

Unfortunately, they were busy catching lots of fish and were finished babysitting. So I checked my compass and Thom had three bass to 25”, enough to keep him in the running for the Striper Cup.

At the sound of a passing two-stroke motor at three-quarter throttle, I readjusted my light as my Yeti went overboard. There is no comfort in smelling old outboards as they pass just past your hopeless position, leaving you engulfed in exhaust to balance out mist clinging to your beard and glasses.

After a few hours catching keeper after keeper, obviously, it was time to head for home. Returning to a ramp is just like leaving it, only in reverse with more clues. Through an easing mist, people slowly appear on the rocks. Gargoyles on public lands, fishermen and women seem somehow cemented to steep angles or they carefully creep down sheer rock with Flying Wallenda poses, hoping to not drop it all. Far too much had been invested from the hike in to lose a good rod/reel combo, cooler of warm, thrice-frozen squid and two packs of Marlboro’s, which typically is pronounced without concern for consonants.

Scan the rocks, hone in on the sound of older Portuguese men in white boots swearing at each other while perched on granite slimed with black-tipped gull guano, reaching to untangle crossed lines. “Droga! Você é um bobo!” you’ll hear, frequently laced with few four letter, easily translated words. Those sounds are lighthouses for the lost; keep them on your port side. You can also follow their line of floating cigarette butts to determine how the tide is moving, so there’s that.

By afternoon, when sunny conditions have finally won,  young kids will have replaced good Portuguese men who took their buckets and headed home to wives and the best caldeirada this side of Ponta Delgada.

Kids also tend to hang in those spots now ruined with spray can graffiti resembling patchworks of painted colorful blankets celebrating poor spelling, unsteady penmanship and someone’s undeniable love for another who likely saw the bad art and left with the Portuguese guys.

“It’ll be fine. The sun will burn it right off,” Todd Treonze said the next day as we tempted fog and fate for a  Newport launch.  The fog was thicker and more stubborn. Since no GPS had miraculously appeared on my Eddyline kayak overnight, the whole crew turned on theirs and left me to Google “Humminbird GPS for kayaks” on my phone. Knowing the shallow coastline is typically less productive for big stripers and clearly understanding how easy navigating is, it was due south for the yak without fear. Within two minutes, all land was swallowed by fog. Being so experienced, I knew to paddle towards a lobster pot buoy for a general sense of location which works generally well until you realize there are twenty-seven of them within a half mile.

A bluefish thankfully dragged me toward some rocks and a sense of bearing.

Back at the launch site, I checked to see if my new Humminbird had shipped, only to remember there’s a map function on my phone with satellite overlay. Clearly those phone engineer geeks had never gone fishing in thick fog or they would have put that app next to the Instagram app. Navigating a kayak in the fog is easy. It’s easier if you stay at the launch with some coffee and wait for some Kryptonite to kick in.

first week with the narragansett times 3/14/14

Good-bye ice, hello crocuses! At the tail end of a banner year for fishable ice, day and night soon find their balance so we can return to our canoes kayaks and outboards. March for most is just a muddy gateway month, a muted grey watercolor of salted roads edged with...
Keep Reading

The 2018 New England Saltwater Fishing Show was another major success. The annual three-day event drew around 15,000 men, women and children to see the biggest names in rods, reels, boats, lures, charter captains and the newest fashions. Produced by the 7,500 member...
Keep Reading

We’re all about trees to help trout, guides to help fish and flies to help a film be absolutely killer. Not a bad winter Fish Wrap week. And you get to meet Peter Jenkins of The Saltwater Edge and the American Saltwater Guides Association.