Stripers are up, fluke are down, scup are strangely attractive 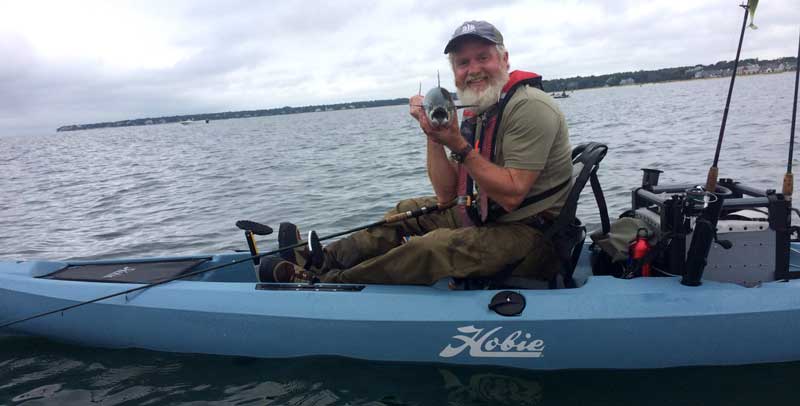 After a tepid start, the summer flounder season has warmed but it sure does not look like a banner year. “The fluke have been a challenge. I have been getting some but it’s been work,” said East Bay fisherman Greg Vespe. Water temps have largely peaked and bait is plentiful so with those exceptional ten pound landings notwithstanding, looks like it is what it is for this year. There are a few piles of black sea bass in seventeen feet of Narragansett water on the usual humps, defying the standard 50-60’ haunts in other spots. Squid strips on high/low rigs, pink with white skirted jigs and even Epoxy Jigs will catch. Pretty much anything with a squid strip will catch something.

Striped bass fishing is solid all throughout the state and nearby Connecticut. Block Island continues to produce, especially on Southwest Ledge where eels and spears are catching the big ones. The regulatory process is never easy but it sure is sweet to see so many pictures of fifties getting the catch, photo and release treatment. The surfcaster striper bite slowed when waters went bathtub warm. For a while,  the ‘Gansett sea wall was the place to catch schoolies and a few slot limit sized bass but then they went deep. There’s still a steady top water bite off the center and east stone walls if the tide is right. Every inch of rock at the end of the avenue’s has been plastered with fishermen and women feeding squid to a seemingly never-ending schools of scup.

The draw of wheeling half pound fish across the surface with a ten foot surf rod then banging the daylights out of them up the rocks before pitching them into a bucket is an odd thing, but credit is given for being set up by sunrise. It’s hard to believe there’s a hungry scup within twenty miles of the lighthouse.

The weakfish bite has been steady near the Jamestown Bridge and bits farther up Narragansett Bay. Favorite lures so far have been small soft plastics with strips of squid or sand eels on the hook. Shrimp patterns are important since weakfish are targeting them in shallow waters. Given their history of sporadic arrivals, it’s best to catch and release them in the hopes of rebuilding that population. According to the Atlantic State Marine Fisheries Commission, “The early 1970’s began a period of tremendous growth in the fishery, with landings peaking at 36 million pounds in 1980. Following an increase in abundance due to management measures, commercial harvest increased slowly through 1998. Beginning in 1999, commercial landings began to decline again, and by 2008, were reduced to less than 500,000 pounds. Commercial landings in 2010 reached an all-time historic low of less than 200,000 pounds.”

The ASMFC lists weakfish as depleted so toss ‘em back and thanks for that.

With blackfish season open again, there will be a big run on green crabs at Sam’s Bait and Tackle and Ocean State Tackle will be open early to fill buckets for anglers eager to get back on the hard bottom. Kayak anglers working around Brenton Reef had been catching a few out of season togs for the last few weeks so that’s a good sign. Highliners like Greg Vespe advise shopping for the larger green and Asiatic shore crabs and hook them one half at a time. A little chumming always helps, of course. The Ct. season remained open while Rhode Island was closed  so it will be three fish per day with a sixteen inch minimum until October 15 when the limit increases to five fish per day.

RIDEM is advising users of coastal ponds to avoid grassy bottoms where clinging jellyfish have set up shop, attaching to structure like eel grass and will remain in the ponds until late Fall.

Wearing a wetsuit will keep them off you as will staying in sandy areas while you dig clams or look for any last traces of steamers. If you do fall victim to their sting, apply an ice pack or rinse the spot with hot water, vinegar or some basic sting/bite spray.

To the west, for now, The Trump administration has identified thirty-five critical minerals which our country needs for economic, technology and military security. According to Trout Unlimited, ten percent of our countries’ known deposits of barium, tungsten, lithium and others are located in protected public lands. Now that the U.S. Army Corps of Engineers has delivered its blessing, sorry, Environmental Impact Statement for the proposed Pebble Mine application, this same administration will likely push to approve the disastrous mine approval process. If you have followed the Pebble Mine saga for the last few years you will surely understand the devastating impact it will have on the largest wild run of sockeye salmon in the world. The EPA, prior to this administration changing the agency’s evaluation process, wrote that the Pebble Mine “would result in the complete loss of fish habitat due to elimination, dewatering and fragmentation of streams, wetlands and other aquatic resources…these losses would be irreversible.”

How’s that for scary?

There are too many details about the application, it’s opposition from Native Alaskans and environmental groups to list here but please, if you have a moment, it’s worth sending your rep a note of opposition. One of the best resources is Trout Unlimited.

Locally, we realize how important our fisheries are to our economy, with recreational fishing returning something in the neighborhood of $400 million to the state’s economy so being vigilant about regulations and industry taking away public resources is always important.

Can you imagine something happening to scup stocks?

It takes a lot of work to keep things simple. It was barely 3 a.m. when Ryan Dubay pulled into the deeply rutted West Island Town Beach parking lot in Fairhaven, Ma. His headlights turned the heads of a dozen guys already milling around their trucks or lightly dozing inside cabs. Bed lights lights sliced […]

Total character Brain Hall find sailfish from his kayak, Aaron Flynn is on the largemouth, Alex Ridgway can find fish anywhere, and we mean anywhere, and then Steve Medeiros, the generous and patient President of the RI Saltwater Anglers Association passed away, quite unexpectedly. It’s a good week tempered with his loss but we’ll offer Steve a fine send off next week. So let’s find some fish….