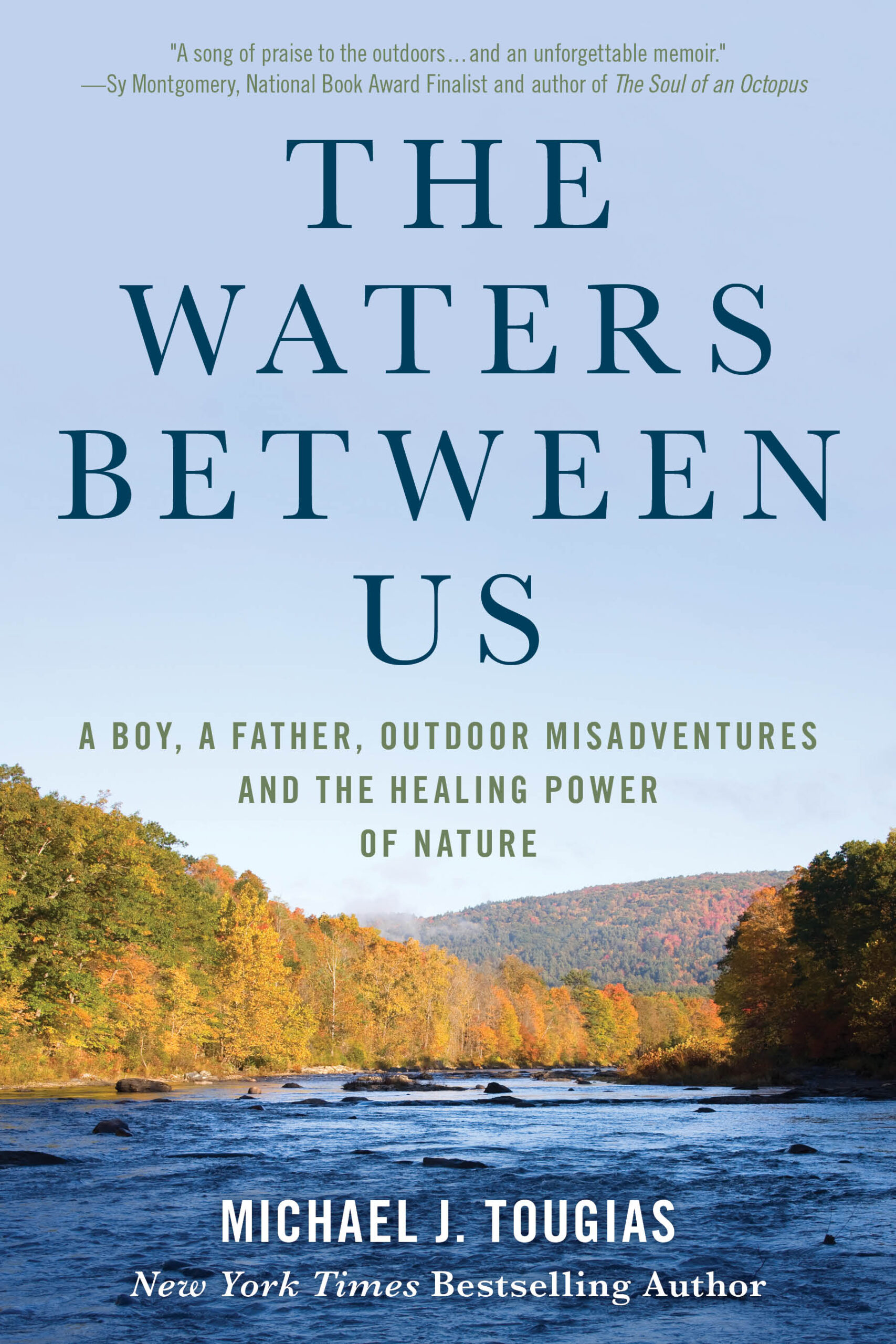 Fish Wrap Reviews Author Michael Tougias’ “The Waters Between Us”

NY Times Bestselling author Michael Tougias has returned with a new retrospective on adolescence in the Sixties and Seventies, colored with missteps, sometimes comical sometimes dangerous, as he managed his way through school, girls and a slow introduction to forests and waters. We were fortunate to review an advance copy. For everyone who loves the many feels and sounds of wilderness, especially those whose outdoors skills developed with few outside influences, this is a wonderful tour of one person’s growth to which we will easily relate.

Tougias’ earlier classics include “Fatal Forecast”, “There’s a Porcupine in My Outhouse” (winner of the Independent Publishers “Best Nature Book of the Year”), “Rescue of the Bounty, A True Story of Disaster and Survival in Superstorm Sandy”, “Overboard! A True Blue-Water Odyssey of Disaster and Survival” and “Above and Beyond: John F. Kennedy and America’s Most Dangerous Spy Mission.” “The Finest Hours, The True Story Behind the US Coast Guard’s Most Daring Rescue” was adapted into a 2016 Disney movie. With a resume such as his, being offered a glimpse into how Tougias’ love of the outdoors is a rare and significant treat, rich with detailed remembrances and wonderful anecdotes which often bear significant similarities to our own childhoods and introduction to water and woods. 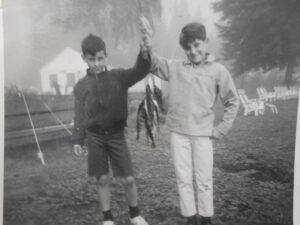 Michael and his brother

My first Tougias book was “Fatal Forecast”, which included a riveting account of F/V Fair Wind crewman Ernie Hazard’s harrowing, relentless beating inside a storm trashed life raft, left me reliving Hazard’s awful, days long struggle for survival every time I even turned on the water for a shower. His words, “Thousands of pounds of surging seawater slammed into his head and back, and tipped the raft end on end so that the doorway faced directly downward” gave me real life images of the gut-wrenching desperation and impending hypothermia Ernie faced for days. Tougias crafted a lifetime of telling other people’s stories; with his newest book, he turns that pen around for us to understand the writer. Years later, Fish Wrap was fortunate to review “The Waters Between Us”

“The Waters Between Us” is contemplative, remarkable

“The Waters Between Us” is a contemplative, remarkable view into years of turmoil and growth both personal and global, seasoned with laughter, friendships, brown trout, cheap sleeping bags and insufficient considerations for consequences. Blessed with thoughtful reflections from preserved notes and journals, Tougias shares his winding hikes through the years, continuously testing his parents’ endless patience while developing a desire for remote woods until adulthood introduces important new perspectives, lessons eventually learned and real tears for those sorrows life inevitably delivers. His descriptive power blossomed from an old school middle class family childhood. The son of a baker and homemaker mother, his brushes with girls, police, booze, drugs and cars challenged his loving parents patience for years. Tougias’ words made me wish for the pleasure of having met his parents, to mine some inspiration for my own efforts as the father of a teenager, who thankfully hasn’t yet challenged me the way he did his. That 1970’s parenting playbook was so much different than todays. Now he is reliving and sharing so many important changes that made his youth identifiable yet often hard to contain.

“It felt good to be detached from the rest of the world, and the stillness and apparent emptiness of the glade added to the otherworldly atmosphere,” he wrote. The fortunate among us have stood on that glade, breathed in heavy pine smells and been awed by the vastness of wilderness, some of which can be found close to our New England homes. Each page, each chapter leads quickly to the next. We need to know what fish he might find or which poor decision he might make. We need to follow his footsteps to high school house parties and paths through tall maples and beeches. 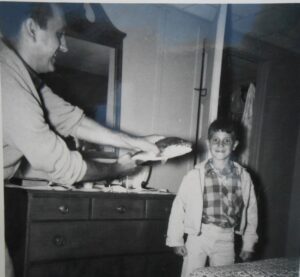 Tougias with his Dad, holding the fish, taking none of the credit

“You don’t get the full measure of a person, the full range of their personality, until you see them fresh, relaxed, and unhurried-a rare occurrence with my dad. At Lake Morey, however, work was the last thing on his mind, and it afforded me a glimpse into the window of his heart,” Tougias wrote. He has created an invaluable, easily identifiable review of a life, weaving his way through joys, realities and struggles of a maturing soul beckoned by open space, growing to discover his place among family and friends. Sometimes wild, occasionally self-analyzing, consistently relatable, Tougias’ travels indoors and out encourage reflection of our own childhoods and passages while eagerly turning his pages, immersed in new adventures, lamenting only that each page turned brings us closer to his last.

“The sound of waves booming on the shore, rolling the gravel and small stones, coupled with the wind whipping through the big pine made quite a racket, but I loved every minute of it,” the NY Times Bestselling author wrote. With a world staring at devices while missing sunsets then checking social media to see how many people “liked” it, his love of the outdoors is something more young people should be encouraged to discover. His observations might never be more relevant than just now because there is a big and mighty world out there, away from TVs and iPhones. “The Waters Between Us” is the reflection we all need to read as our world reopens to outdoor adventures, especially if you have kids and dreams of a cabin in the woods. In Tougias’ own words, “I loved every minute of it.”

“The Waters Between Us, A Boy, A Father, Outdoor Misadventures, and the Healing Power of Nature” by Michael J. Tougias is available through Lyons Press, an imprint of Rowman & Littlefield.