This week, we are all about friends catching and releasing, travelling for more fish, because fish are Hall around us this week, chasing big fishy dreams and landing albies with single hooks, with a quick note about the passing of Steve Medeiros.

One can go only so many weeks without a Brian Hall update. Brian left the reservation, temporarily, to fish some warm Florida waters, from a kayak of course and had excellent luck finding sailfish. Launching out of Pompano Beach in a borrowed Hobie, Brian paddled and peddled, “16 miles from beach launch to landing with the jet stream overtaking any incoming or outgoing tidal influences,” he said. There is solid information that he has shaken his Taylor Swift issues and no pop tunes were played during the successful expedition. Brian then headed to Pushin’ Water Kayak Charters in West Palm Beach with guide Brian Nelli to get in on the barracuda bite. And they can bite. With two sets of teeth, one designed primarily to tear prey to pieces, the other, longer teeth fit nicely into accommodating holes in their jaw which enables closing their mouths completely. While they rarely attack humans, it’s still wise not to tempt nature, which is why Brian held one by the tail and gill plate. 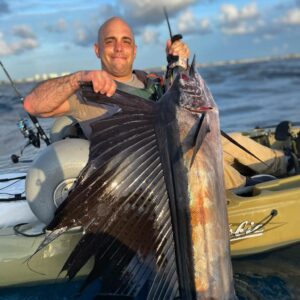 Brian Hall with a sailfish ready to be released

Watch that Brian Hall catch fish here, there and everywhere

Brian Hall has always managed to find big fish, either at night with live eels or in Narragansett Bay with artificials and now, he’s mastering the Gulf Stream, catching and releasing his way home, proving once again that fish are Hall around us. Cheers to you sir. 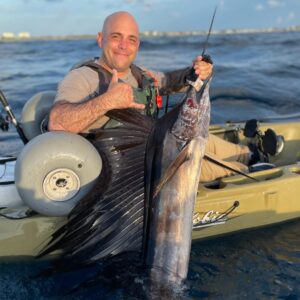 Narragansett’s Scarborough Beach, famous for Camaro’s, crowded parking lots littered with Bud Light cans and a certain, distinct smell wafting north from a busy municipal building, has been busy with the tuna fleet. Things have slowed over the last week but it has been memorable for sure. Bluefin tuna, more typically found this time of year around the Mud Hole, are feeding on mackerel and peanut bunker around the mouth of The Bay, some days just a few miles off the beach. Some say the weak albie bite is due to all those 90” tuna pushing them offshore.Why are we seeing such an abundance of tuna? The Canadian Company, Omega Protein, exceeded the Chesapeake Bay menhaden quota of 51,000 metric tons by a third in 2019 in its relentless pursuit to convert critical forage fishes to salmon feed and lipstick. Finally the Atlantic States Marine Fisheries Commission dealt with an admitted blatant disregard for quotas designed to protect jobs and fishes and took away an equal amount of quota the next year. So perhaps we are enjoying a fine, albeit brief, reminder of how fishing was before some exploited to such excesses where one company could deprive coastal fleets of commercial and recreational anglers from enjoying chasing migratory fishes like tuna. Sad to say but we may not see such abundance next year when the seins and vacuum hoses are back around the Chesapeake and menhaden again stand little chance of surviving, let alone heading north to feed so many other animals who have depended on them for millennia. Sometimes we humans don’t learn a thing from our mistakes. 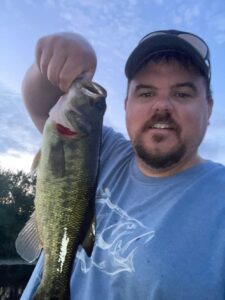 South County’s Aaron Flynn is balancing a new airport career while his largemouth fishing really takes off, enough so there is talk of taking it to another level. After that third place finish a few weeks ago in Connecticut, Aaron is thinking there might be a brighter future in the tournament world. “I’ve been in some big tournaments this year, I might try to work with some big clubs, I know I have a lot to learn,” Aaron said in typical low-key style. Aaron and his fishing partner were in contention for a win when he hooked into a sold four pounder near a half-submerged log. Aaron called for a net and that bass shook the hook. He has momentum, determination and most importantly, a circle of fishing friends who will support him while he considers more options. We give a big tip of the camo hat to Aaron Flynn and hope he goes big. 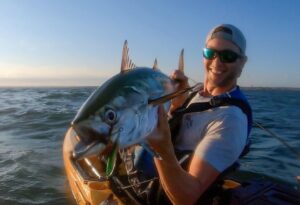 Alex Ridgway has been all over the albie bite, even as writers like us say the bite suffers from storms, rains, dirty waters, hungry bluefin’s and other excuses we use when we can’t find them. “I’ve had a few incredible bites in Massachusetts waters, but landing 16 yesterday was wild. Feed after feed with no one around,” Alex said. So yes, the bonita bite is here, it’s just aces like Alex who remember what they caught in years past and successfully target fast fish with great knowledge. “Conditions were terrible. Big onshore wind stacking up the increasing offshore swell. But, this was a spot I have countless hours at, knowing exactly where the limit is.” Alex has kicked the treble hook addiction, opting to fish only single inline hooks. “Fully honest, non-biased opinion: they’re better. Never kill fish and never pull the hook. Wide shank gets the corner 95% of the time,” he said, adding, “It was so hard to commit to them, so funny looking back now.”

“Totally loving the single in-line hook on the Joebaggs resin jigs. Last year I committed to the switch from trebles and haven’t looked back. I’ve yet to gill hook or drop a single one, out of 98 total,” Alex said. If ever you’re on the verge of opening some rings and making the switch, consider Alex’s note that, “I hit 100 total today on single hooks. 66 last year, 34 so far this year.” That’s 34 albies caught and released by a generous fishermen while all those tuna are supposedly chasing away the albies.

Thank you Steve, you are sorely missed

Sadly, Steve Medeiros, President of the RI Saltwater Anglers Association, has passed unexpectedly. We will offer this great man a fitting tribute next week but for now, as we read of those swept from Narragansett rocks and Newport waters, this is the right time to offer a prayer for a good man who loved his wife dearly and worked tirelessly to protect the rights of recreational anglers. Many will never know how hard Steve worked for us.