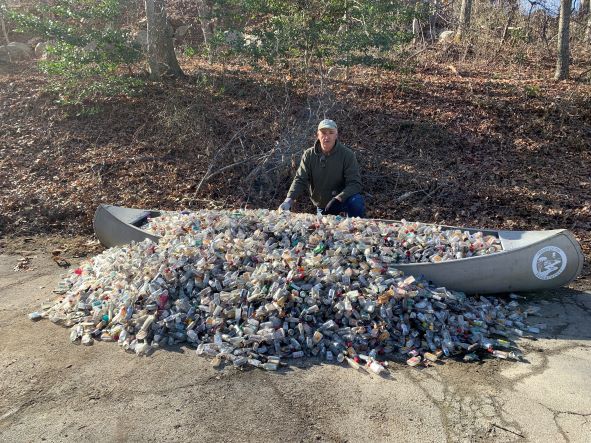 “They are literally everywhere,” said South County’s Bill McCusker, running his hands through a blue trash totter teeming with bright, faded, new and worn plastic bottles the size of business cards. Out for a walk, peddling a bike, putting in a canoe, turning north, even parking at a restaurant, it’s easy to see empty plastic shots of liquor polluting our landscapes. I say, it’s time to ban nips.

For the thirsty, they are nips. They are quick and cheap. Down the hatch, out the window. For the civilized, they are trash bearing fingerprints of callous consumers who drink without regard for long term hazards of plastics gone wild. Adding insult to stream injury, nips small sizes make them unrecyclable.

If Nips Are Not Recyclable, Why Are They Legal? 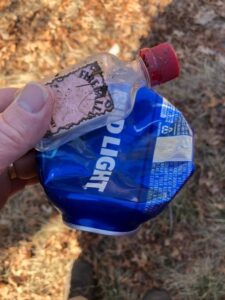 Bill McCusker is on a mission to curb trash on our curbs, gutters and waters as he collects nips with a group of volunteers. Leaning on a Kubota tractor he uses to move piles of plastic, he said, “195 nips fit in a five gallon plastic bucket. 12 buckets fit in a town totter.” Later, standing on the edge of South Kingstown’s Saugatucket River, I watched nips float at half-mast along tan weeds, move slowly down an almost stagnant seam, gather against a frayed rope barrier then gain sufficient momentum to run the falls of an unnecessary dam and pollute their way to the sea.

Last week, fishing a salt pond popular with duck and goose hunters, a washed up striper, stripped of any flesh, still held a gold shotgun shell in its throat. What happens when all those nips work downstream? Will fish eat them as well? Will those clear bodies whitened by sun and red heads look like bait to stripers, blues and black sea bass, only to clot their intestines, ensuring a slow death by starvation? Bill envisions an easy fix: ban single serve plastic booze bottles.

From one location, volunteers recovered 600 nips over three visits. Let that sink in, as they do over time. I know that spot and there is water there. And herring. And history. For heaven’s sake, there are Fireball nips gagged up in a locust blowdown behind a liquor store on the Saugatucket. And this Spring, if you go look, you might see the miracle of migrating river herring trying to circumvent that mass of avoidable trash. Could the problem be more obvious or more solvable? 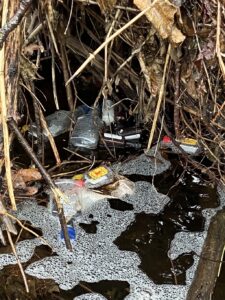 Could this be more disgusting?

Legislation is needed now. Stop kicking nips down the road

“We need some sort of mechanism to get these off the street,” Bill said, because squads of volunteers should not be combing streams and shoulders for the trash some trash toss out windows. We all know regulations are generally reactive so RI House bill 7064 addresses the litter issue of  “miniature alcoholic beverage containers…This act would prohibit the sale of miniature alcoholic beverage containers in Rhode Island.” I’d toast to that but it has been “held for further study” which means it’s been tossed out a window like so many nips because, if I were to venture, the liquor lobby lobbied in defense of such high profits from half priced easy sells, which overrides consideration of our natural world. As our waters and roads become dumping grounds for the lazy and paranoid, let’s react to Bill McCusker and other’s work and pass a bill to ban nips.

Smaller containers typically cost more money per unit. With booze like Fireball, Bill determined that a 200ml plastic bottle, which is recyclable and more easily pulled from briar patches, costs approximately 3.75 cents/ml. A 50ml nip costs approximately 2 cents/ml. So it makes far more fiscal sense to buy a sleeve of ten unrecyclable bottles than a larger, recyclable bottle, so companies are selling their product at lower prices in smaller volumes to encourage sales of more unrecyclable plastic. That’s easy math.

Say you go out for dinner, put back a few nips in a parking lot/trash can, tuck a some nips in your pocket, then order a Coke for two dollars with your burrito, instead of a cocktail. If seven nips relates to seven cocktails, which would add around ten dollars to that Coke’s price, that’s $70 lost. And that’s just one parking lot in one day in one town. How many dollars are lost by restaurants or entertainment venues who pay dearly for liquor licenses because of nips? How does the liquor lobby address those trickle down losses?

The bottle size makes them unrecyclable in Rhode Island’s Material Recycling Facility. That fact alone should be enough to ban them. At some point, aren’t we, for once, supposed to consider consequences beyond our screen doors and start weighing ten seconds of boozy bliss versus petroleum-based plastic degrading into our land while micro plastics gag trout streams and our bloodstreams?

Commonly available research indicates that plastic bottles can take 450 years to decompose. 450 years. Is that really worth a cinnamon mouthwash which hardly makes you funnier or a better dancer? 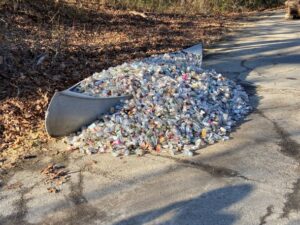 Unreal. And the liquor industry is lobbying against this?

“It’s because they are afraid they’re going to get caught,” Bill observed,  that more nips are discarded near on-ramps to busy arteries than at off-ramps. Of course. Ease off the highway, hit a liquor store for a sleeve, let a plastic wrapper fly out the window, drink a handful, toss any evidence out a window and get back to the business of driving drunk.  And definitely don’t concern yourself with those osprey lining their chick’s nests with shredded plastic.

In an odd moment of celebration, Bill announced the group of eight volunteers achieved their goal of collecting 9,378 nips to fill four totters in 90 days.

Bill estimates numbers for reasons of sanitation but we can’t underestimate the damage nips are causing to our environment, just for people’s personal temporary wants.

Dear legislators: take control of this problem. Pass a bill, sign it into law. It’s time to litter-ally stop allowing the lazy and callous to choke roads and waters with unrecyclable plastic bottles. It is time to lobby for our environment. At minimum, pass a bottle bill.  Please. 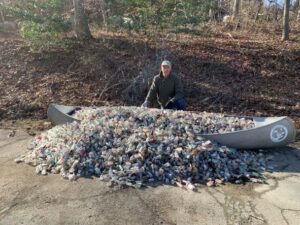 This is not a proud achievement