Fish and Regs Are Back 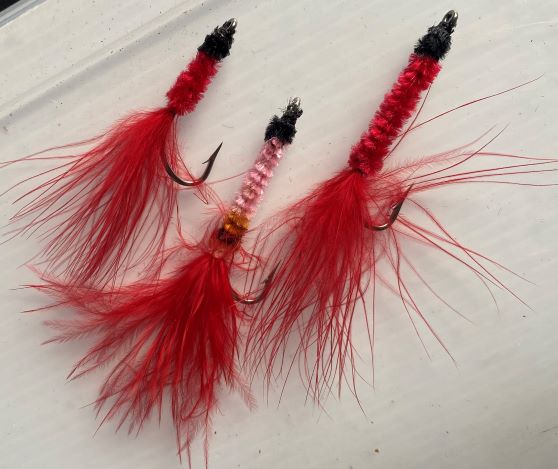 Finally, a busy week here on the water. Regulations are being finalized, hatchery trout are circling for food and anglers are readying their trout gear or looking west for signs of striped bass.

Greg Vespe and a giant tautog

The RI Marine Fisheries Council convened to finalize regulations for several recreational fisheries. Greg Vespe, Executive Director of the RI Saltwater Anglers Association, has spearheaded a series of recommendations to protect fish populations and the rights of anglers to fish for them at so many of these and similar meetings and hearings. While not all of RISAA’s goals were achieved, as is commonly the process, several favorable positions were reached. It’s a new world for sure, where fishing clubs are flexing members’ muscles to protect fish not just so they can be caught, but because they understand a larger ecological picture and future.

Based on Council votes, the sea bass season may open in May 22. The minimum size will be 16” with a bag limit of two fish per day which will increase to three fish per day on September 3.

Fish and regs are back to bring joy and protection

“We all know sea bass regulations in general are still screwed up at the Mid- Atlantic level, but given that we had to take a 20% cut in addition to us trying at same time to reset the seasons, I think we did really well. Charter and party boat captains did carve out their own season, which I remain concerned about, as I’m just not sure long term carving up a species into sub set groups is the right way to go…. but for the moment we can look forward to a season that starts on May 22nd and enjoy the redistribution of the sea bass season to now include the spring/early summer fishery,” Greg wrote in an email to RISAA members. 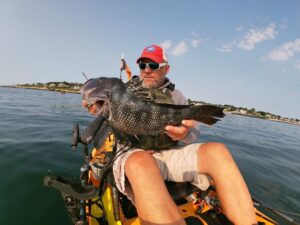 Randy Degrace with a beast of a black sea bass. His photo

“This is one of the biggest wins we have had in a long time,” Greg added. “It needed to change and it did. If any of your fishing friends ever ask, ‘Why join RISAA?’, our efforts on changing sea bass regulations to include a spring season is certainly something that can be pointed out. Had we not pushed for the change, we would have still had the 20% cut and we would be starting near July. Now it’s almost time to catch em up!” Greg wrote. Indeed, let’s get to it.

“We were able to bring down the size for fluke to 18″ at a daily bag limit of four,” Greg said. “We all know fluke are in trouble so while this helps anglers, I’m not sure it does much for our fluke but it should allow for reduced dead discards a bit anyway and also allow us to actually bring a few home for the table, so we took it as a solid win. 5-2 was the vote.”

Peter Jenkins will throw a Striper Season Kickoff bash at his Saltwater Edge tackle shop on Saturday, April 16 from 9am to 3pm with all sorts of deals on striper plugs and gear. Some big vendors will be there, including ZBelts and Aquidneck Island Rod Builders. You can hit up the food truck while you peruse custom plugs by Guppy Lures, ZShore Customs, Gremlin Lures, High Hook Lures, Nor.Cal.Kat, 401 Plugs, Big Water Pikes, GooGoo Man, Asylum and Voorhies. Of course, Peter will be showcasing his line of St. Croix, Penn, G. Loomis and Van Staal gear.

And tie some cinder worm flies 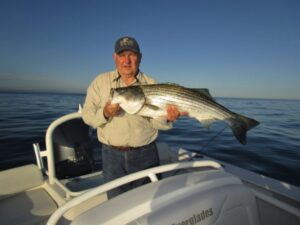 If you tie your own flies or want to give it a try, The Cinder Worm Workshop has finally returned. Traditionally hosted by Ray Stachelek and David Pollack, COVID cancelled a spring tradition which began in 2009, where a room full of folks would gather to teach, learn and enjoy the art of tying, most especially the typically red cinder worm pattern. Thankfully, they have returned in person and as per their tradition, materials and vices are supplied for those who don’t already have enough fishing vices, at no charge, of course. Possibly the best part is that following the two weekday evening classes at the Kettle Pond Visitor’s Center in Charlestown, you gather up and head out for the Grassy Point area of the Ninigret National Wildlife Refuge.

If you want in, but don’t have a just right fly rod, you can arrange to borrow one from RIDEM, even with waders. This class is blessed to have knowledgeable, helpful and patient instructors who will also go fishing with you in the refuge to ensure your new worm pattern is cast correctly.

This great deal is the result of a wonderful collaboration between the US Fish and Wildlife Service and our RIDEM’s Aquatic Resource Education Program. All this is free of charge, including decades of knowledge. Space is limited to 40 people. The dates are Monday, May 2 and 9, from 6:60 to 8:30pm. The fishing part happens on May 14 from 4pm to dark. This really is an event not to be missed, not just for the education of tying or casting, but for Dave and Ray’s universal knowledge and love of being in and on the water, especially when the worms are out in force. If cinder worms are new to you, do some homework, read up on the mystery, joy and potential frustration of fishing a salt pond for fish which may or may not be wreaking havoc on the surface as a million tiny red worms wiggle and shimmy, continuing an ancient and amazing ritual of reproduction. Contact Dave Pollack at Dpollipo@gmail.com to reserve your seat.

Trailer Trash Spoiler Alert: Nothing Happened at the DMV. This is the second installment of one man's journey to register a small boat trailer. The first piece, which is pretty important to the big picture of the problem, can be read here. A sandwich walks into a bar....
Keep Reading

The Narragansett Surfcasters held their 5th Annual Surf Day and Used Tackle Sale and as expected, the day was a big success. More than 250 people looked over thirty tables piled high with reels, waders, plugs and flies. Fishermen went in droves to shake off some...
Keep Reading

Dan Kenney is bringing the outdoors right to you

Dan Kenney is making a serious name for himself. Dan’s an outdoors promoter  and fish guy who is bringing his next big deal, the Connecticut Outdoors Show, to Mohegan Sun for the first time, which opens up all sorts of possibilities when you consider the location....
Keep Reading