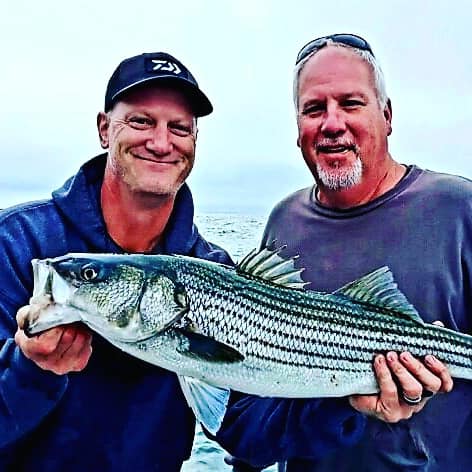 This is such an unbelievable time to fish Rhode Island. Decent-sized stripers are still feeding in salt ponds, fluke season is here, bluefish are making a mess of plastics and up in Narragansett Bay, well, the fishing is epic. 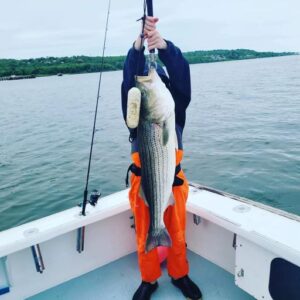 Southern salt ponds are holding mid-sixties water temperatures. That’s approaching striper’s upper comfort limits but if the bait stays, striped bass will look for deeper zones during the day but still get brave after dark. For the last few weeks, we have had great success fooling stripers in very skinny water with top water plugs. South County’s charcuterie cutting board master carpenter/artist, Zach Valliere, has stayed true to his favorite G Loomis rod and an old-school popper, working them like he was calling in some largemouth bass. From his Coleman canoe seat, he’s caught and released bass in three and fifteen feet so far this month. At night, bass have been staging near docks, riding easy on tides, looking for quick meals, saving energy. Some came aboard acting as though they hadn’t seen many canoes in salt water. Or a fishermen with a 1970’s slick mustache. You go Zach. 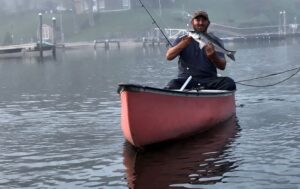 Now is the time for big stripers in Narragansett Bay

A D.O.A. Popper Clacker matched with 16” of 20# fluorocarbon leader tied directly to a LIVE TARGET 5” Slow Roll Shiner has been my most successful rig for when there is a bit of surface chop and you are chasing big Narragansett Bay stripers. The Slow Roll has incredible coloring but more importantly, it swims true so after you snap the rod to make the clacker clack, the Slow Roll follows, balanced perfectly to fool bass. Aim right for those pockets of nervous water behind docks and boats. In deeper spots, it’s been all about the Shimano Splash Walk. Tied directly to 18” of 30# fluorocarbon leader and 30# Tuff Line braid, no lure calls big bass from their haunts like this one. 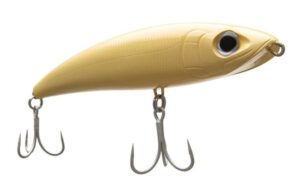 I like the bone color during the day and either mackerel or squid patterns after dark. It’s a productive lure that lands with a big splash, which is also great for teasing fishermen in center consoles at night. You’ve never seen heads snap around so quickly. Classic humor. 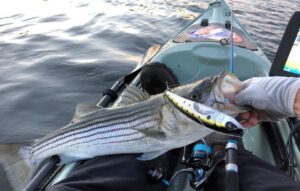 Splash Walks should be in every tackle bag

Mike Wec landed a tasty trifecta from his boat. He said, “How often do you see this combo? Weakfish, four spot flounder and 10 fluke. It was a solid day for sure. Hate it or love it, rolled in like a freight train today.” We all know Mike is the guy out fishing or hunting when the rest of us thought it too windy or cold and now, on the verge of summer, he has landed a once plentiful squeteague and a close cousin of summer flounder.

There are bluefish throughout Pt. Judith Pond and Narragansett Bay, gorging themselves on the tails of Swim Shads and pretty much anything plastic. I have a stout collection of paddle tails without paddles if anyone needs some. Stick to classic wooden popper in pink white and blue with single hooks. Blues hunt in packs by day and solo at night so having a wire leader in your surf bag is always a good idea.

Mike Littlefield and the Gravelins are on the big fish

Mike Littlefield and his Arch Angel Charters has been all over the big bass. Mike has been putting sports on some serious top water action with fish coming aboard in the thirty and forty-plus range. What’s equally cool is how many fish he is releasing. Now, instead of wooden dock racks bending from the weight of more fish than five people could eat, we are bragging about catching and releasing. It’s estimated that around 18% of bass we release will die anyway, often from too much time out of the water, rough handling or sloppy dismounts. A few years ago, fishing with some fancy people aboard the pretty Bonita II, a 36’ Hatteras charter boat berthed in Watch Hill, Captain Tim Terranova was visibly upset when a cigar smoking New Jersey passenger landed a fat thirty pound fish then hucked it overboard like a sack of cement shoes. We had to circle for ten minutes to make sure she did not float up dead. Cheers to Mike Littlefield, Tim Terranova and everyone releasing bass with care. 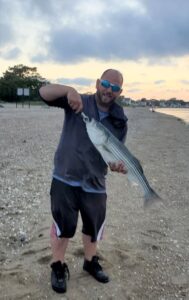 Eric Gravelin having a beach party

Eric Gravelin and his son Dominic hit the night bite this week and landed several stripers from the beach. With gas at five dollars a gallon, with being on the bay at night always a safety challenge and with the added bonus of running to the car when no-see-ums move in, beach fishing is always so much fun. Did you know there are more than 5,000 species of those biting midges? Who knew? 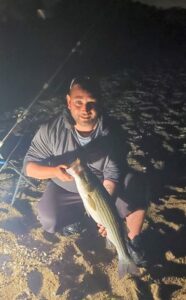 Eric Gravelin working through the night

We first met the two in 2020 when Dominic was hauling in a big bluefish from his kayak. It was a bluebird day and the father/son kayak team was having a big day. You know, two years later, they still have the same happy look on their faces.

They look happy to be catching fish certainly, but happy just to be out fishing. Father and son getting it done on a late Spring night. Cheers to the Grevelins.

Dom Gravelin can catch ’em up!