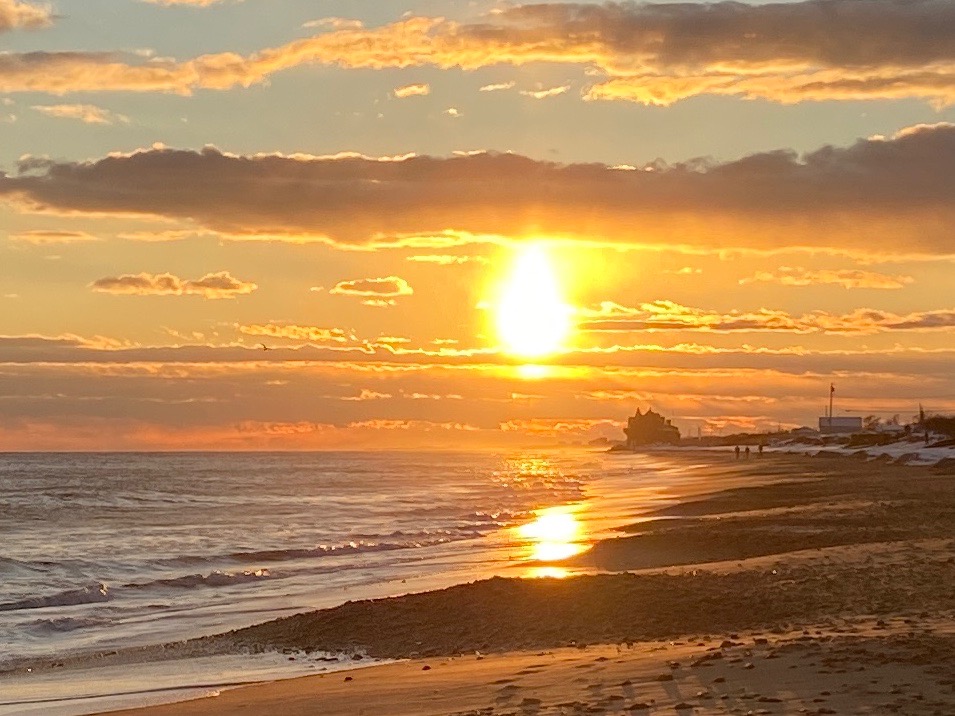 “Good morning, the plumber/carpenter/furnace guy/painter will be at the house tomorrow. Just thought I’d let you know,” was a common message on my phone from South County’s Mike Doyle. He owed the house across the street and always made sure renters had what they needed. He told countless people over the years not to worry, that if something went wrong, he would fix it. “Ok,” Mike would say, “Very good. Over and out.” 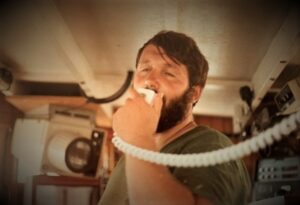 “Very good, over and out” Photo courtesy of Kelsey Doyle

One time, I asked him if Charlie Niles, who ran Mike’s boat, the F/V Charlie’s Pride, was seeing any bluefish in the nets and if I could buy a dozen or so for the smoker. A few days later, on my doorstep, was a black fish tote, iced and covered, overflowing with fresh fish. We pass each other sometimes, you know, in boats or cars or trucks. We pass without making time to talk because we have so many new walls, new divisions, new ways to create distance. We are all so busy now but Mike was always generous with help and his time. Charlie and Mike are both gone now. 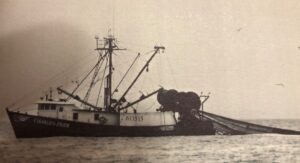 Some years back, stacking winter firewood with my very young son Miles, Mike came to visit. Miles looked up to him, marveling at his large frame. “Did you think I was Santa Claus?” he asked, with a big smile. Mike Doyle had a wonderfully big smile. As he leaned on a newly stacked chord, the whole deal gave way. Firewood and Uncle Doyle all ended up in a front yard heap. Rising up laughing, he headed for his truck and I returned to the business of stacking wood. Mike Doyle was a big man and most of it was heart.

Mike Doyle was all heart

Over the years, I kept an eye on his house, helped when he needed some, cut the grass, that sort of thing. He would let me know who was moving in or moving out. More than once he said, “They’re good people. I’ll probably never get the rent, but they need some help.” Mike believed in people and he always knew everyone’s backstory, who their father or mother was, where they used to live, were married to or worked. Being local or in need carried more seawater for Mike than any credit rating. Many months, Mike didn’t get that rent. 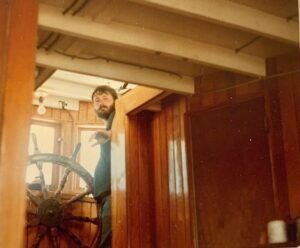 Mike Doyle at the helm. Photo courtesy of Kelsey Doyle

Mike, Uncle Doyle to us, also had unique timing. Many summer Sunday’s, my wife Alison and I would sit for breakfast and just as, and I do mean at the exact moment that first pancake or coffee cup neared our small table, Uncle Doyle would roll up in his big truck, arm out the window, peering under the maple to see if I was home. His passenger side window would already be down. So I would take my coffee and Alison would chuckle and Mike and I would chat for a half hour or more, about the price of dabs or scup, how Charley was working off Montauk, how Scott Smith was so good running his big boat, the F/V Seafarer, for loligos around the Vineyard. “So, how you making out?” he would always ask. I loved hearing about his boats and where they were working. Mike Doyle was proud of his boats and the men who ran them. We would talk about what hydraulic line let go on the last trip, an ice machine he was updating, how the bottom looked at haul out, how his girls were doing in college up north. We just talked. 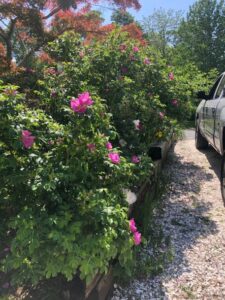 With coffee and bare feet, a perilous path to Mike’s truck

One time I teased him about that timing, how all I could smell was bacon and maple syrup. A few visits later, Mike handed me a bottle of maple syrup he brought back from New Hampshire.  That was Mike. Now another friend of South County has passed. Now there is a funeral, flowers, praise, prayers, the whole damned thing. Now there’s not much to do about losing Mike, just to remember those good Sunday mornings, leaning in his truck window, listening, laughing, hearing about his girls growing up and building their own new lives. Now I would give up every Sunday morning breakfast to peer out that kitchen window, to see Mike roll up, to pick up my cup, to shuffle bare feet on hot summer pavement, to see him reach for his calculator to explain the price of squid boxes and hear about a leaky stuffing box. 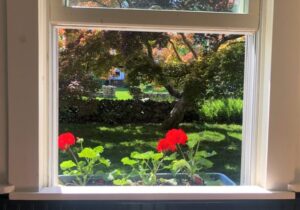 Just where Mike would park on Sunday mornings