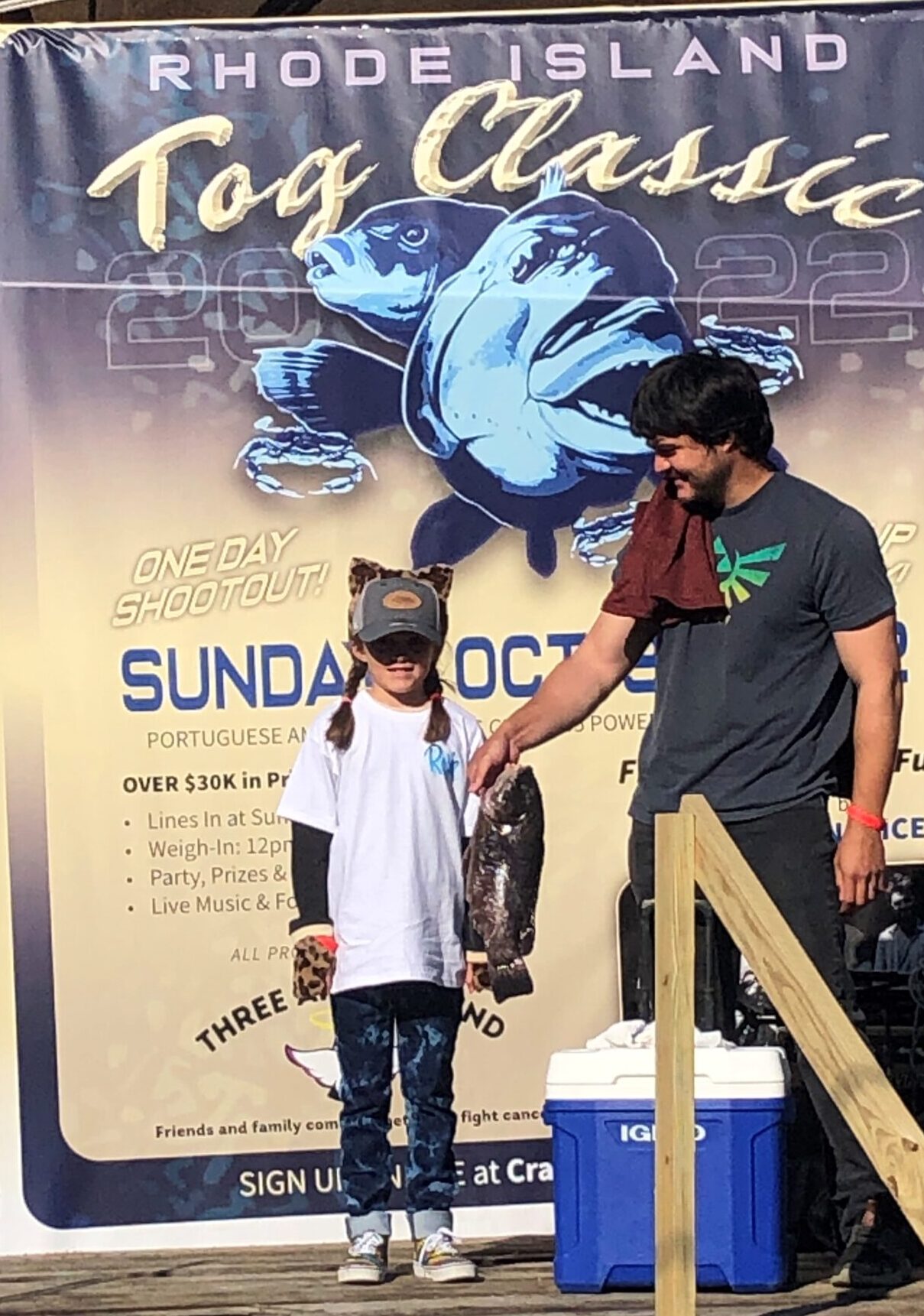 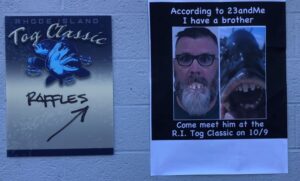 Ralph Craft and just one of his alter egos

Ralph Craft has done it again. Close to 700 people entered his 2022 RI Tog Classic then packed the Portsmouth Portuguese American Citizens Club to celebrate wins, Calcutta’s, food truck fare and that welcomed feeling of community. By night’s end, a stream of successful fishermen and women and one amazing young girl named Rosie, took their place on the leaderboard. All monies benefited the Three Angels Fund and in his singular style, Ralph gave us charity with an attitude. “If you have any complaints, you can leave,” Ralph finished, with his classic half-smile.

With early brisk winds changing plans and shortening trips, anglers trickled in just after noontime. Right away, Justin Oser weighed in a 10.6 pound tog landed from his kayak. Word was, he didn’t care for the breeze, paddled home after just a short time, weighed in, won the kayak division then the Calcutta. Now that’s a fish story. Scott Crain settled into second place in the kayak division with a 6.5 pound tog, lamenting that it was early and he was sure to be bumped. Chef Scott is a solid angler and he stayed on the board. Well done Scott. 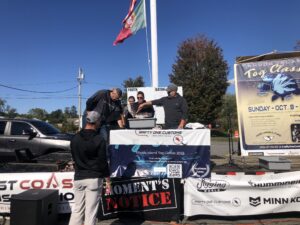 Weighing in early on Sunday

Then the Miss Colleen pulled in. Right a way, the 2022 RI Tog Classic boat division was packed by Phil Duckett with 8.2#, Darrin DeSuto with 9.15# and Greg Vespe with 9.12#. Undeterred, Alicia McAllister stepped and weighed in an 8.14 tautog and could not have been happier. By 3:00, the weigh-in line still stretched through the parking lot. Competition was rough and names were shuffled quickly.

“I’m here to take every freaking bit of money you have,” Ralph commanded, easing side to side, nursing very recent knee surgery, as if some needed reminding of tournament’s purpose. Local favorites Moment’s Notice, kept the music flowing, even playing a much-appreciated blistering version of the Grateful Dead’s “Bertha.” “Fishing for a cause,” Ralph said, while encouraging everyone to dig deep in their wallets and purses.

Team Heavy on the Miss Colleen tipped the scales

To win a Classic, you best be well prepared. Greg Vespe, Executive Director of the RI Saltwater Anglers Association and fishing with Team Heavy, was on it. “What a weekend!” Greg said. “We squid fished until 2am Saturday morning, got back out at 10am ‘til dark for pre-fishing with the team, worked on rigs until 11pm, then got back up at 3:30am for the tournament. I am spent but in a good spot. What a fun event and it’s amazing how supportive the community is.” Drop the mic.

The 2022 RI Tog Classic was full of surprises. Even from deep in the crowd, I could see someone jumping up and down at the scales. With her hat down gunslinger low over pig tails, leopard print paws, sparkly checkered Vans and an airbrushed t-shirt, eight year old Rosie was a presence on stage. Her father, Hugh, weighed in her 4.55 slab of tautog. She was twirling a celebration dance around everyone and everything for sure but she also watched those scales closely. After a brief photo session in front of the tourney banner, she slowed for a rolling interview.

Rosie, the Absolute Star of teh 2022 Tog Classic

Striving to provide REEL solutions to all of your fishing needs!

For the Classic, she landed eight tautog, three of which were keepers using green and Asiatic shore crabs and a ten foot rod.  Her Mom knelt with Rosie’s younger brother Everest, while Rosie told me all about her fish and her growing business and how she loves to fish and how happy she was and how her dad always helps her. Rosie is a sweet, rising star and an absolute highlight of the 2022 Tog Classic. We will meet Rosie again when it works with her busy schedule and I honestly cannot wait to hear more stories and see her work. Please visit her on Instagram at rosies_baitandtackle.

Then Robbie Taylor of Newport Sportfishing Charters appeared. Robbie always makes an entrance, even when he’s not trying to. Big hair, big beard, big tautog was his statement as he weighed in an 11.12 pound beast. Robbie is a tough act to follow.

The room was filled with raffle items, all for charity

With every fish weighed, it was silent auction time which was anything but silent. Auctioneer Tommy Ney laughed his way through spicy language, ensuring everyone understood just how much damage cancer has done to people and families. Then he boisterously raised bids on Bruins and Celtics tickets with a finale of choice seats to see Bruce Springsteen in NYC selling for $2100. It was a fine day for the Three Angels Fund. Trophies from Grainger Pottery, obligatory giant checks and even an all-in-good-fun toilet themed trophy were awarded, with the latter going to Ken Boudreau, who entered the Classic last, pressing ENTER with just 55 seconds to spare. Because we are a community of good people, Dan Chin won a Calcutta check and had already told Ralph to give any winnings back to the Three Angels Fund. 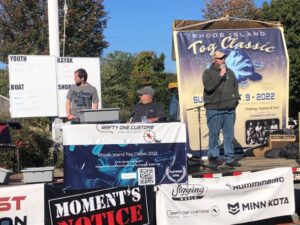 “Thank you very much for coming out,” Ralph said, in front of banners from major sponsors Minn Kota, Humminbird, Jigging World and Crafty One Customs. Well after dark, with checks delivered and a long list of raffle winners announced, Ralph Craft and his lovely wife Shannon closed another successful RI Tog Classic to raise as much money as they could to fight cancer. 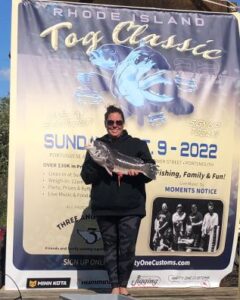 A proud moment on the stage for Alicia McAllister

In the midst of all we consume from radio, television and the printed word, there is a reminder of what we, as Clay Pell would say, “ordinary Rhode Islanders”, can do to shape an important piece of our favorite pastime or paycheck. The Atlantic States Marine Fisheries...
Keep Reading

The Rhode Island Department of Environmental Management has announced a Free Fishing Weekend for Saturday, May 6 – Sunday, May 7.  Anglers are invited to fish without a fishing license or trout conservation stamp in the state's freshwater streams, rivers, ponds and...
Keep Reading