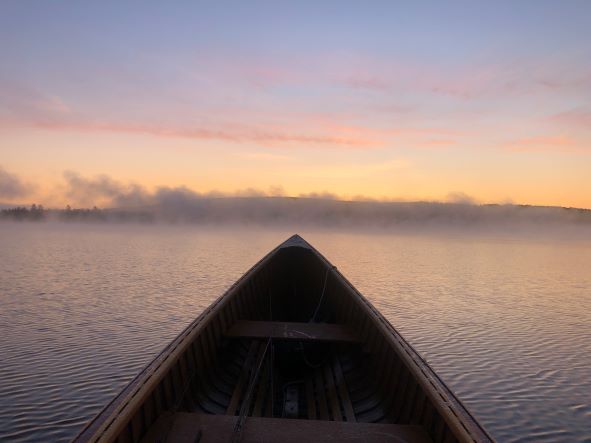 Fall fishing in Rhode Island is red hot. Stripers are packed along shorelines, bait schools remain thick and mobile while crowds have thinned sufficiently to allow locals to stretch out on beaches and rivers. Some times, fishing is just that easy. Based on some solid largemouth tips, I rose at 4am, hitched up my 1926 Old Town Sponson Sport canoe and headed for a quiet few hours with no plan for an unscheduled Worden Pond baptism.

My idea was to run some gas through a new-ish six horsepower outboard before putting her on the hard for the winter. Balanced and pretty, my prized canoe is a carefully restored, American made woodworking marvel of craftsmanship and simple design. Her resale value is high and no buyers will be entertained. On young mornings, when stars fade equally as warm October suns make slow but grand entrances, such a canoe transports me across big waters in faraway Maine and neighborhood ponds, like Worden. There is no price for any of that. 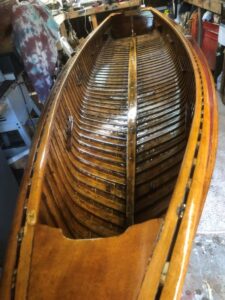 Early enough so stars still held some space, already there were parked trucks with cold motors and no boats in sight. Alone in a gravel lot, I secured the outboard to the stern, closed my tailgate and reversed down a cement ramp. Once splashed, diligently I walked along the truck bumper to release the strap then fell into the pond. Having not fully closed the tailgate, she released with my weight, receiving my head in short order, which then bounced off two heavily varnished AA grade mahogany gunwales (a $15 option back in 1926) and my feet slipped over such a thin metal trailer tongue, inverting my position, leaving me fully submerged in the dark and shallow pond.

Once righted, it was clear only a quitter would let a mild concussion and Bean boots filled with minnows end a sweet day of fishing. So I unclipped her, swiveled my head to ensure it was still attached and that no one had seen such an epic fail, and secured her to the dock. It is unfortunately surprising how difficult walking is with eight pounds of water in leather boots. 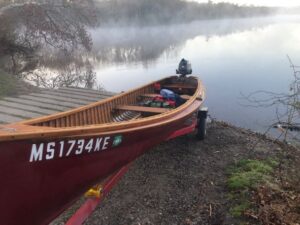 Once gear was stowed, she fired with a bit of extra choke and three pulls. There are few things finer than such long, thin, correct lines rolling off a well-built boat, steaming into a new day. Our state’s largest natural pond, which is barely six feet deep, received her name from Dr. Samuel Worden, who purchased her from Benedict and James Arnold in December 1696. Attracting anglers, farmers and bomber plane pilots, she also supports some giant Northern pike. Far to the northwest corner, she conceives the Pawcatuck River, providing momentum and nutrients to later collect several small tributaries and the Wood River before spreading into Westerly’s Little Narragansett Bay. I steamed straight northwest. She glided and I smiled. Setting up shop on some green grass beds, it was fine to hold a favorite bass rod in one hand and scratch my head with the other, wondering how I misplaced a Yeti tumbler teeming with just-right hot coffee. Despite such a start, it was moments such as that, paused on a pond, watching a day’s creation, spying swirls and tiny flying fish, enjoying those lovely moments that transport us from ugly partisan realities and make us thankful again. Long casting for a bass lurking on a shallow edge, my Shimano Macbeth quickly wrapped around a rod carefully placed behind me and out of the way. Ten minutes to untangle is easily expended on a bluebird day. Cleared for take-off, I made a sweet cast just to where that fish was ten minutes prior. Aiming now for the Pawcatuck, I pondered how wind knots happen with no wind. Drifting slightly, I untangled thirty seven and a half yards of green 20# braid, laid that rod down and made a move. 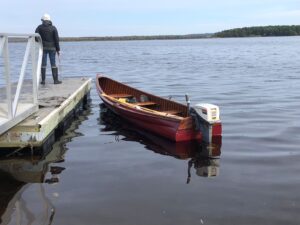 a sweet canoe to carry us away

I pulled the chord, she fired, I threw her in forward, she quit. I pulled again, she resisted, I rested, she rested, I pulled, she rested, I swore, she fired. Quickly throwing her in gear, we were gliding on top of the world for nineteen seconds or so until she quit. Air, fuel, spark, right? Worden is 1043 acres, give or take, which I resigned to paddle knowing one does not easily propel a 16’ Old Town Sponson Sport without proper oars, now stored safely at home on my ofice wall, which is where I was starting to wish I was.

Nothing would make that engine run nor the morning cooperate. For the next 90 minutes, she gave me only 30 seconds of run time. On a quiet October morning, I swung a four foot, rough cut, mouse chewed ash canoe paddle blade across Worden Pond without coffee, or beer for that matter. I thought about those fancy people who do really foolish things, like row across oceans or climb tall buildings with suction cups and Spiderman suits then get on morning talk shows. I understood no one would invite me to sit with Steven Colbert and talk about my bravery and woes. Finally gaining on the dock, sweating and thoroughly irritated even by the sound of happy sparrows on cattails, I vainly strangled my new motor with scorn and calloused hands.

Lamenting the unscheduled Worden Pond baptism, I backed my truck to the ramp as one wooden boat support came free, wedged itself underneath then jacked the whole deal up two feet. With great effort, I picked the trailer off the ground to see a frame twisted and board splintered. I considered crying, which I recognized as unhelpful although possibly warranted given that it was barely 7:30 and I squeaked when walking. All I wanted was to drink coffee with some fish, watch water roll off my pretty boat and be home for breakfast. With that damage, the boat could not be motored on, so, accepting complete defeat, I trudged into Worden Pond, was soon submerged up to those places you don’t want submerged, pulled her on the trailer, secured the strap, shook like a tired old lab and squeaked back to the truck.

Deflated, I slowed to appreciate an evolving, spacious sunrise, eased onto the rough main road and felt my broken trailer run over my just-right coffee. Later, as my lovely wife cleaned dishes from the breakfast I missed, a text told me the largemouth bite was really red hot on Worden Pond. It’s just that easy.