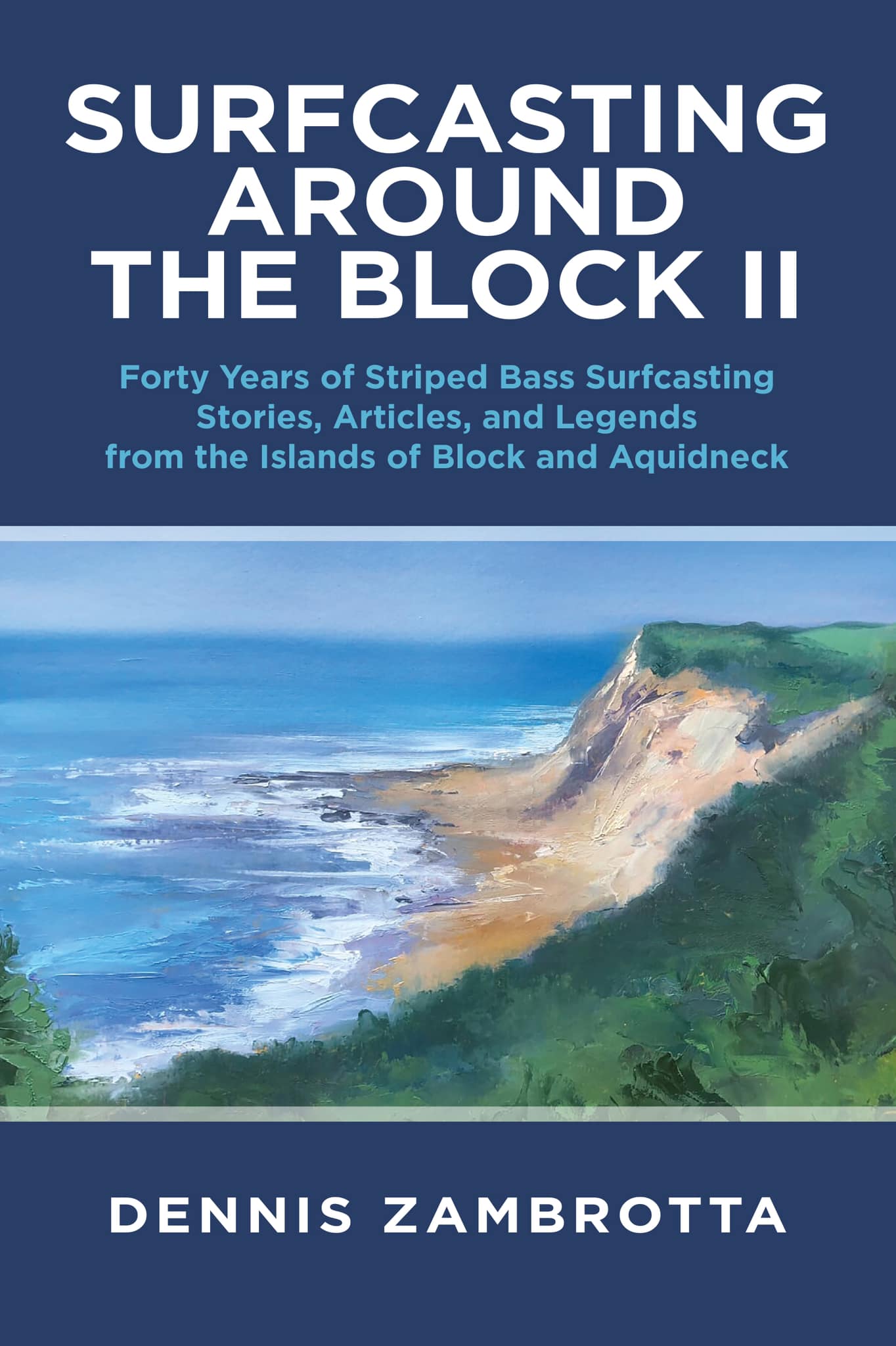 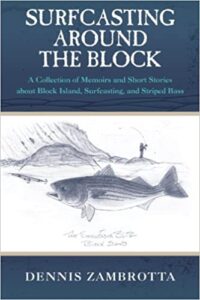 Dennis Zambrotta, known for his years of surfcasting success on Block Island, respected for his knowledge and fishing wisdom, famous for his first book, , “Surfcasting Around the Block, and appreciated for being a total gentleman, has released a sequel and it is fantastic. Surfcasting Around the Block II gathers stories and counsel from many of these characters, combines them with his personal anecdotes then ferries readers to Aquidneck Island for similar beaches and potential and is a must-have for anyone who loves the island, fishing and seawater.

Dennis’ decades of working boulder fields, rock piles and short sandy stretches clear through to dawn also helped him build a network of angling friends who shared his love of the island and the peace of off season quiet back in the time before five boat days in December and endless shoulder seasons strolls. In the days before, Fall and often early winter lured anglers from all over to cast needlefish and jointed swimmers for giant striped bass. Fishing Block Island with Dennis Zambrotta was a crew of heavyweights who fished hard, stayed all night and returned each year to have a stretch of North Rip or Lewis Point all to themselves. 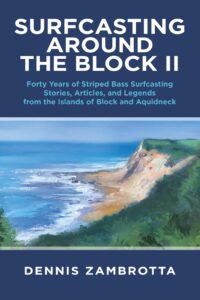 “When I go out there, I just burn myself out,” Dennis said, referring to a recent late season visit to the island. He spoke of a feeling of contentment, of success and satisfaction from being back on those shores, catching fish. If you don’t yet know Dennis, he’s a bucket list kind of character to meet. Those  who spend long nights in fishery regulatory meetings, all know the droll of people who talk to hear their own voice. Subtle eye rolls and sunken heads. When Dennis speaks to a subject, like losing public access, people turn their heads to see him, they listen, shake their heads in agreement and some take notes. He has that level of credibility. He’s also earned it. Dennis acknowledges that fish are somewhat smaller these years but also that new slot sized fish, from 28″ to 35″, were plentiful and fun to chase. “Anything from say, twelve to around twenty pounds, today that’s big fish,” he said. What you gain from reading a book like this, from fishing Block Island with Dennis Zambrotta, is a deep dive into his deep knowledge. It’s true, fishing on the island is not like it used to be but forgive me, what is these days?

Surfcasting can be a religious experience in the right moments

You will learn about how migration and bait patterns are changing and how fish hit certain plugs at certain magical times not because of a university computer model but because fishermen like Dennis, Steve Winters, Paul Lemma and the late Tim Coleman put in their time, watched, considered, preplanned and understood. In his own right, Dennis has much to offer and we should absorb it all but he is also wise to share other’s wisdom. His friend’s often went to the island just to discover what was there, buying eels, loading rods and sandwiches into whatever vehicle could survive an expedition to Black Rock, The Church or the soft sands of The North Rip and praying for fish. 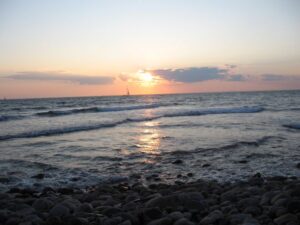 Sunsets and stripers at The Church

“That biomass is just not around anymore. The giant fish are just not there,” Dennis said, but his words are here forever, to help you find those slot fish, those high bluff turns that shade moon and crowds, where we all know, some very big bass still lurk, feeding on schools of wary menhaden or squid. They might be at the end of a long dark path and in Surfcasting Around the Block II, Dennis Zambrotta will lead you to the beach. 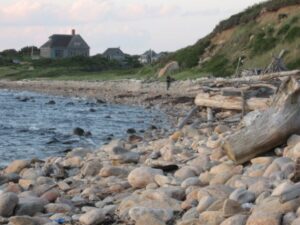 A long, wonderful walk for surfcasters

Dennis has fished for years with passion and joy, both of which are quite often experienced with others, alone, at sunset and in such absolute absence of light. He has hiked and cast in a self-imposed vacuum, absorbing all that nature provides, if you are accepting, and the peace that comes with a suspicion, temptation, connection, battle and release, all without anyone with a flashbulb or instant anything. He is the last guy to tell you how many he caught, unless you press, and the first to express his gratitude for all those miles of dunes, driftwood piles and rolling cobbles played by tides.

Surfcasting Around the Block II is a must-read

“I don’t see anybody out there anymore,” Dennis said. “It’s weird, it’s just how the whole dynamic has changed.” The Island’s demographics are abruptly different. The fishermen, carpenters, electricians and plumbers who worked all day and fished many nights, often to send a few fish back to the mainland in wooden boxes, are no longer there on the beaches. Many peaceful stretches of beach are lit through the night by Jersey transplants who are less likely to be out all night casting into the darkness for big striped bass. It’s more of a tourist trap than a late season fishing destination. “When I go out there, the only other fishermen I see are either other visiting fishermen, of which there are very few, or Max or Steve Winters occasionally, but Steve works during the day so I know he’s not going to be burning the midnight oil,” Dennis said.

Readers can take note of changes to people and fish, to access points and bait patterns, then dig into Dennis’ plentiful recommendations for how to fill a plug bag, find access and enjoy time on a special part of our world. What Surfcasting Around the Block II is not, is a rainy Sunday review of days gone by with a bourbon and one ice cube to salve the aches of too many nights on the rocks or too much regret that waters and fisheries are changing. Surfcasting Around the Block II will rouse you; it’s a fine assortment of top-tier anglers who earned their pages in Dennis’s collection. What all great stories require is heart and Dennis offers you his. He loves the island, he loves finding the perfect plug and he dearly loves to go fishing. Surfcasting Around the Block II is a must have for every angler and a welcomed gift for the holiday list, is available at local tackle stores, bookstores, as an E-book and at Amazon.com. 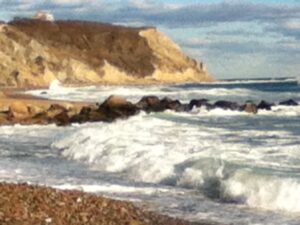 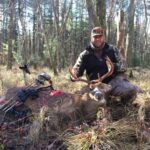 Some waters have warmed and some fishing has cooled. Stripers have started their expected travels from the upper reaches of Narragansett Bay towards Newport, South County and Block Island. There are still fluke in plenty of regular spots and the sea bass season has so...
Keep Reading

Monday morning bus stops will be full of chilly children doing the two-sneaker shuffle dance, hands stuffed in wind breaker pockets, collars turned to the breeze, the air suffuse with old bug spray. These are sure signs of fishermen parents who, forcing the hand of...
Keep Reading

This week we’re turning the ship around to face a few of you, to hear what made 2018 special or maybe fantastic. Some folks landed the trout they dreamed of, some couldn’t get their math straight, some were just happy to get out and fish with their friends. In no...
Keep Reading

“Whatever I catch, I’m going to say it was three times bigger.” 13 year old Tim Roberts started a day of fishing by sinking my writing plan. Drifting along Warwick Neck in Captain Tim Wordell’s bright white Cobia, the younger Tim was a camper with the R.I....
Keep Reading