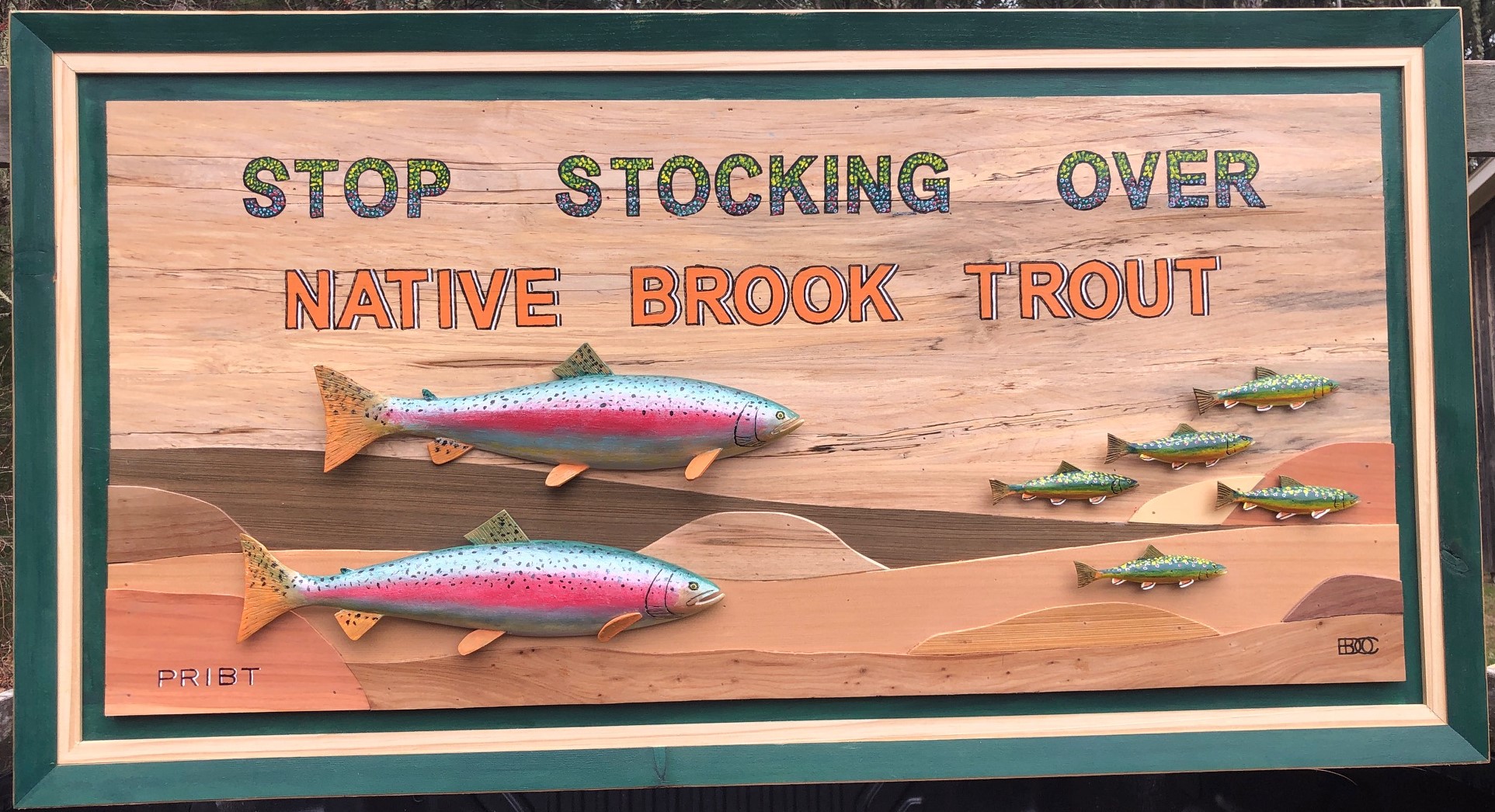 Changing the status of the Upper Wood River, even temporarily, requires a change in regulation and in our understanding of how critical rivers are. The regulation part is problematic for Christine Dudley, DEM’s Deputy Chief of Freshwater and Anadromous Fisheries. She knows well that “laws don’t get changed so easily” and require solid science to facilitate a new direction. Dudley was exceptionally open to discussing the Protect Rhode Island Brook Trout proposal, providing data, maps and access to Principal Fisheries Biologist Alan Libby, who has studied state waters for more than twenty years. Throughout several conversations, it was clear that Dudley very much respects their intentions and has not by any means dismissed it prematurely. Meanwhile, silt is filling in the river, suffocating the gravel.

The reality of managing state waters and navigating local politics is such that she and the department as a whole, rely heavily on scientific data like Libby’s to prepare for and react to public pressures. “We base our management on science and his work is reliable”, she said but Pezza, a retired PhD, professor and TU member since the late 1970’s, feels they are surveying insufficient areas while considering too limited a range of inputs.  While respecting his service to the state and years of study, his social science methodology has been at odds with PRIBT. The Journal of Molecular Science article speaks directly to the issue of how “surveys can help steer policy making toward decisions that will be followed by the public, but they should not be used to justify science.”

In some ways, fishermen are front line scientists in that they ask questions when they see or catch but in the eyes of the state, they are not scientists, they are fishermen. “People who fish often feel they know the stream”, Christine Dudley said but Brian O’Connor feels, “It is because I am a fisherman that I am doing this. We want the State of Rhode Island to do what they are supposed to be doing”. 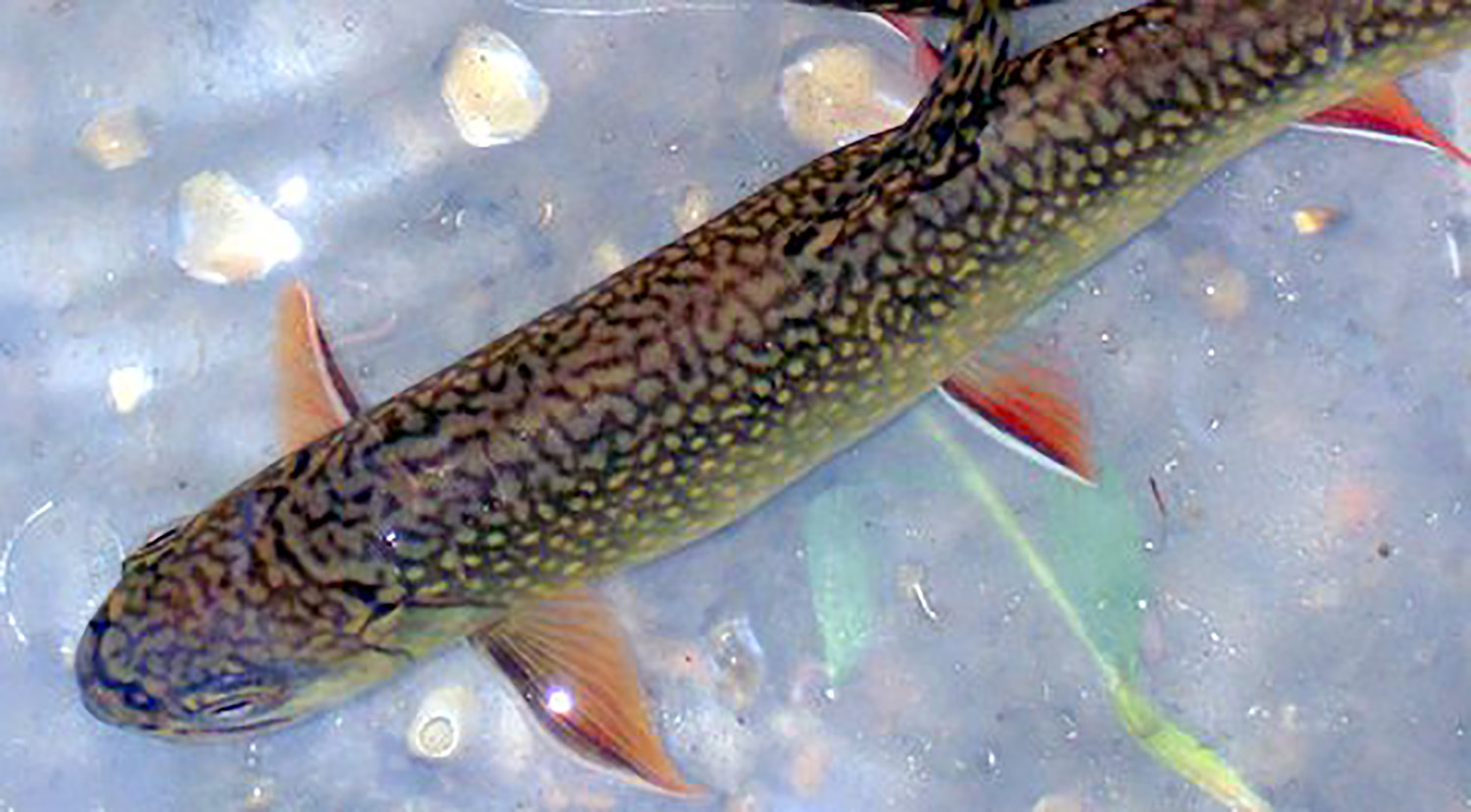 Libby has stated that “The purpose of stocking is to prevent overfishing and the decimation of wild populations while allowing anglers to take their catch home to be eaten. Since some wild fish contain high levels of mercury, hatchery raised fish provide a safer alternative to anglers who wish to eat their catch.” Stocking trout serves great purpose when used for restoration efforts or in areas where there would be little to no competition with wild fishes. “There is room for stocking” said Geoffrey Day of the Sea Run Brook Trout Coalition, a grassroots advocacy group working to preserve and restore native coastal brook trout.  “TU is not opposed to stocking by any means”, said their CEO and President, Chris Wood, “with a massive preference for preserving wild fisheries”. In a recent opinion piece in the High Country News, he wrote, “Stocking non-native fish on top of native fish does nothing to restore native trout to a healthy environment; instead, it is a backwards and self-defeating activity.” PRIBT is not opposed to stocking in other locations because we are a population bursting at the seams; retaining waters where we can go a’fishing, where your catch can be consumed, where kids can be outdoors, free from a digital anything, should not be undervalued.

PRIBT, supported by a web page and almost a thousand Facebook followers, argues that heavy fishing pressure and stocking are the roots of what they see as a steady decline in the health of the river and her headwaters. A temporary catch and release classification in addition to a suspension of stocking may may help remediate some pressure and pervasive shoreline degradation which often comes with so many footprints. That part of the proposal also requires a regulation adjustment.

In a June 2015 letter, DEM’s Assistant Director for Natural Resources, Catherine Sparks, noted that the proposal would “further limit public fishing…to catch and release, presumably of only wild fish.” Her statement gets right to their point: the possibility of a solid, healthy, reproducing wild trout population and therefore, fishery is not a limiting factor, it is a best case scenario. Will the economy supporting fishing collapse if more areas were not stocked? “It’s a false choice”, said Wood, “that either we stock and support the economy or we don’t stock and lose the economy.” Montana stopped stocking trout in waters which held wild brook trout back in 1974, a massive undertaking and risk, considering the numbers of fishermen with dollars in their pockets who flocked to their headwaters and streams. Today, according to Montana’s Fish, Wildlife and Parks Department, the state benefits from almost $1 billion in income from fishing. “And what fisherman doesn’t have that place on their bucket list?”, asked Wood.

Sparks also noted that “Stocked trout do not remain in the environment”, adding that “They have never been found in first order streams of the Wood River where spawning occurs.” That short life span of those stockers is a real concern: if they are not caught and you believe they do not live to reproduce, then what? For those few weeks are they cannibalized or just perish from starvation in a wild environment? Pezza feels they failed to look in sufficient places and that “anglers catch brown trout as small as three inches in length in the Upper Wood”, showing that invasive stocked fish can reproduce thereby continuing a cycle, already discussed, of out-competing the natives. Sparks noted that “hybridization between wild and stocked fish may not occur at all, or at very low levels” but any level can dilute the genetic purity of native stocks. It’s a back and forth which needs to be addressed.

In deference to all parties, there are strong anthropogenic drivers at play here. We fishermen want to catch fish, maybe big fish, in remote lush locations we need to believe are secret. Anders Halverson, author of An Entirely Synthetic Fish, feels that stocking fish is a government funded, which means publically funded, way of maintaining some unnecessary level of human hunter/gatherer instinct. Fair enough. TU Chapter 225, members of a larger group with a long resume of positive water and shoreline restoration projects, no longer assists DEM with stocking, although its members are free to do so of their own volition. The State wants to keep us happy and the checkbook full because DEM is indisputedly budgetarily short-sheeted every year as their responsibilities only increase. This begs the assessment of our collective priorities, of whether our wants as fishermen, coupled with our detrimental impacts, however subtle, on the watershed, can be suspended for 5 years to give the river a partial rest from some of her pressures.

Protect Rhode Island Brook Trout is raising a distress flag that many do not want to acknowledge: changing how we consider the Upper Wood, adapting to catching and releasing small but wild, native brookies for a while, even how we approach the fine art of fishing, requires taking a step back.  Christine Dudley accurately said, “We love our resources and sometimes we love them to death”, which means the best course of action is action.

Paul Pezza, Brian O’Connor, Burt Strom and Martin Custodio, now outcasts from an organization meant to bring together fishermen who share a love of pursuing fish with an eye towards conserving waters, are telling us that after decades paddling fishing and loving this river, they know this is the right time to make a change. This also is the right time for the state to seriously consider making one. As such, to bring DEM, PRIBT, TU, the Sea Run Brook Trout Coalition, the Wood Pawcatuck Watershed Association and any fisherman who gives a damn all together, to begin a conversation, I will provide the table. This is my invitation to start a new year off in new territory, under one roof, to discuss a proposal and the absolute importance of protecting Rhode Island’s wild, native brook trout.

A few lines from Fish Wrap's first Opening Day... April 18, 2014tcorayer Trout season opened warm clear and bright; a real bluebird morning. Boats of all shapes sizes and materials ground their way down ramps all over South County. Stocked ponds were packed to the...
Keep Reading

DEM reg redo, some truth stretching and PBR’s on the horizon

Lions Club meetings begin with the awesome toast of water: "Not Above You Not Beneath You But With You". Fantastic.  Right now ospreys and blackbirds are all of those, circling above, building nests and attracting mates while bass perch and buckies are swimming below....
Keep Reading