Swim Shads, Seabass, Shotguns and Skateboards. Man, Rhode Island has it all this week!

This week we get caught up with a Narragansett Times piece from a few weeks back. Sorry, it’s the whole busy holiday season thing…

With seawater temperatures holding tight in the low to mid-fifties under falling air temps, fall has opened the door to excellent fishing and hunting. Striped bass continue to be caught from Newport to Watch Hill as schools of bait cling to the shorelines. Elisa at Snug Harbor Marina reported that lots of guys are fishing the beach from the Galilee’s West Wall all the way to Charlestown. There’s plenty of flat sandy bottom along that stretch where bass won’t necessarily hang on but there are some hidden curves and harder features. Looking for places where waves bend can tip you off to the slight bottom change that might be holding fish. Soft baits like Storm Swim Shads and RonZ’s can be perfect deceivers as long as herring or bunker stay in tight. We should enjoy several more weeks of great striper fishing as the tail end of their migration comes to a close, then it’s time to focus on salt water rivers before winter takes over.

The tautog bite has been steady with most people finding them in deeper waters. 50 to 60 feet and even down to 80 feet a bit to the east seem to be the magic numbers right now. Green crabs are the go-to bait. Elisa’s customer Matt Smalley landed a 10.82 tautog and their limit of fish, which is ten fish per vessel, were all over six pounds. Not bad for the middle of November. For those able to get out in their boats, seabass seems to be all around especially near Block Island.

That season runs until the end of the year with a seven fish per day limit. The bait shop is on fall hours now so you can get your gear and crabs from 9am to 4:30 every day.

Shotgun deer season is underway on Block Island, opens for the mainland on the first Saturday in December and closes on the third Sunday in December. There is an additional season of December 26 to January 2 but only for antlerless deer in Zones 1 and 2 only. 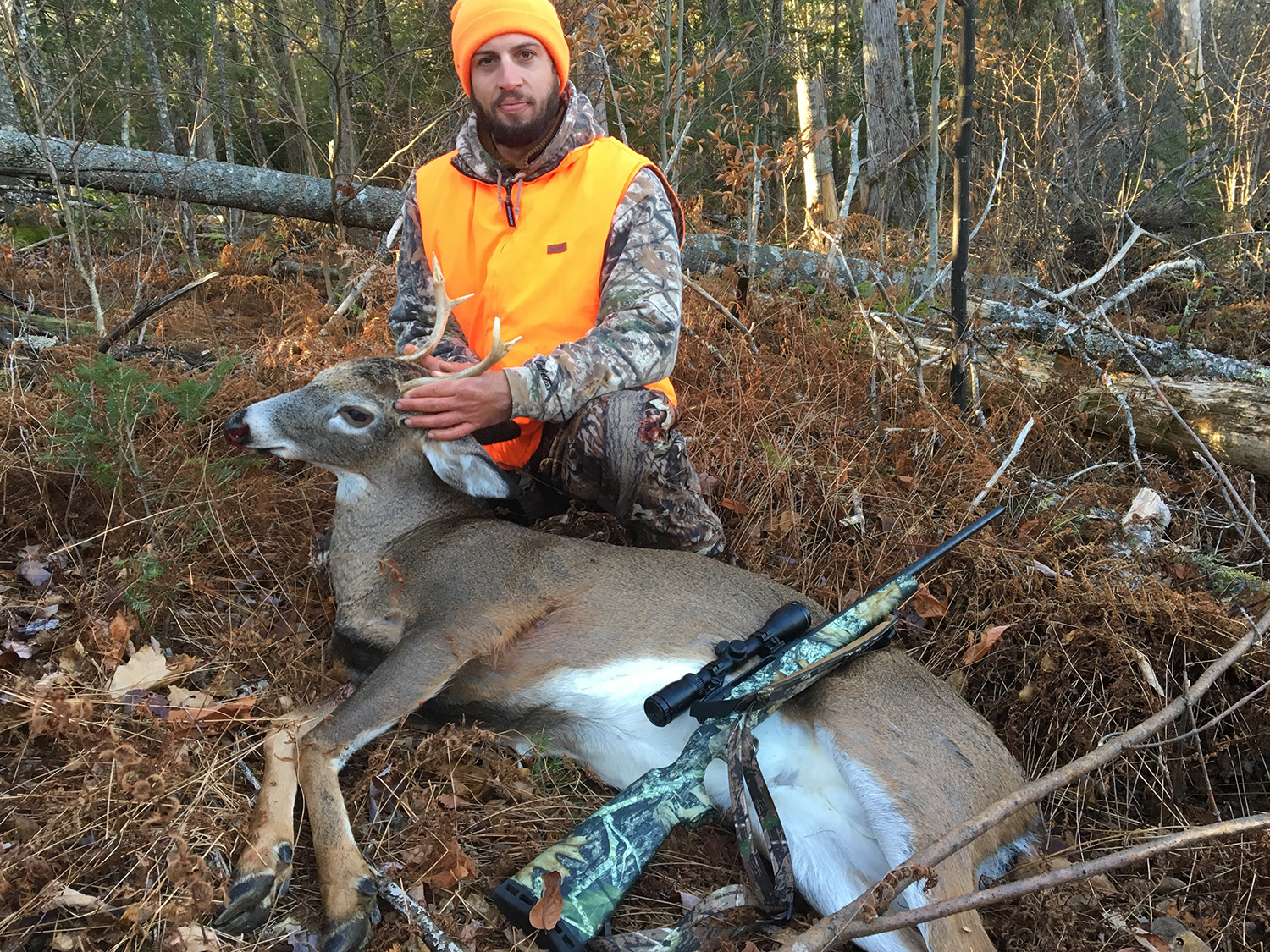 Islander Tanner Littlefield headed into the woods of Athens, Maine last week for their deer season with a group of seasoned hunters. Tanner’s a true sportsman whose caught plenty of fish and shot his share of ducks and deer on the island but unlike the rest of his party, rifle hunting in Maine was a new adventure. And unlike the rest of his party, he’s the one who got a deer. And it was a big buck. Being sportsmen and gentlemen all, I’m sure there was some quiet mumbling under their breath about the new guy bagging the buck on his first trip but it couldn’t have come to a better guy.

The one week Canada goose hunting season will close this Saturday, November 27 and open again on Saturday, December 3. That second season runs until January 30 with a limit of three birds per day. Hunters looking to set up in the fields along the south shore may need to obtain permission and a reservation first. With approximately 17,000 licensed hunters in Rhode Island and a steady increase in house building, it gets harder every year to find open land to hunt. Our state runs management and special hunting/management areas with rules for each. If you’ve driven past field three on the east side of Matunuck Beach Road, you’ve probably noticed the pit blind surrounded by corn stalks, making for a perfect place to call in geese. You can call RIDEM at 789-0281 to check on availability or use their very informative and searchable website maps which clearly shows where you can hunt and fish, as well as swim, ride a skateboard, which is not a crime or play volleyball. Click on their RI Great Outdoors Maps page and pick out areas you might want to hunt. Or skateboard.

Duck hunting season opened this past Wednesday and quickly closes this Sunday. It’s open again from December 3 to Sunday, January 22 while the season for sea ducks starts on the 24th and remains open until Sunday, January 22, 2017.  There are a host of stipulations for duck hunters not limited to areas. Certain types of ducks like mergansers, canvasbacks, mallards and wood ducks, just to name a few, have separate bag limits which means hunters need to able to identify what’s lined up with their 12 gage before pulling the trigger.

To help with that, DEM will hold a waterfowl identification workshop on Wednesday, November 30 from 6:00 p.m. to 9:00 p.m. at North Kingstown’s Cold Spring Community Center. People 12 and older who have completed a hunter safety course attend to learn ways to determine bird species from things like wing patterns, colors and how to identify waterfowl in a variety of settings. Events like this usually fill quickly so you need to email Fish & Wildlife’s Jessica Pena at jessica.pena@dem.ri.gov to reserve seat. If you haven’t taken their hunter education course, Scott Travers will hold one last session for this year on December 10 and 11. The class runs from 8am to 4pm at DEM’s Fish and Wildlife Education Center, 1B Camp E-Hun-Tee Place in Exeter. You can contact Scott at scott.travers@dem.ri.gov. These days of limited sunlight will begin to reverse after the winter solstice on December 21. As our earth will be its closest to the sun all year just after the solstice, called the perihelion, sunlight slowly will stretch out through the next few months. For our last weeks of New England fall, we will enjoy early morning duck hunts, the foliage of deer season and one last shot at stripers after dark.