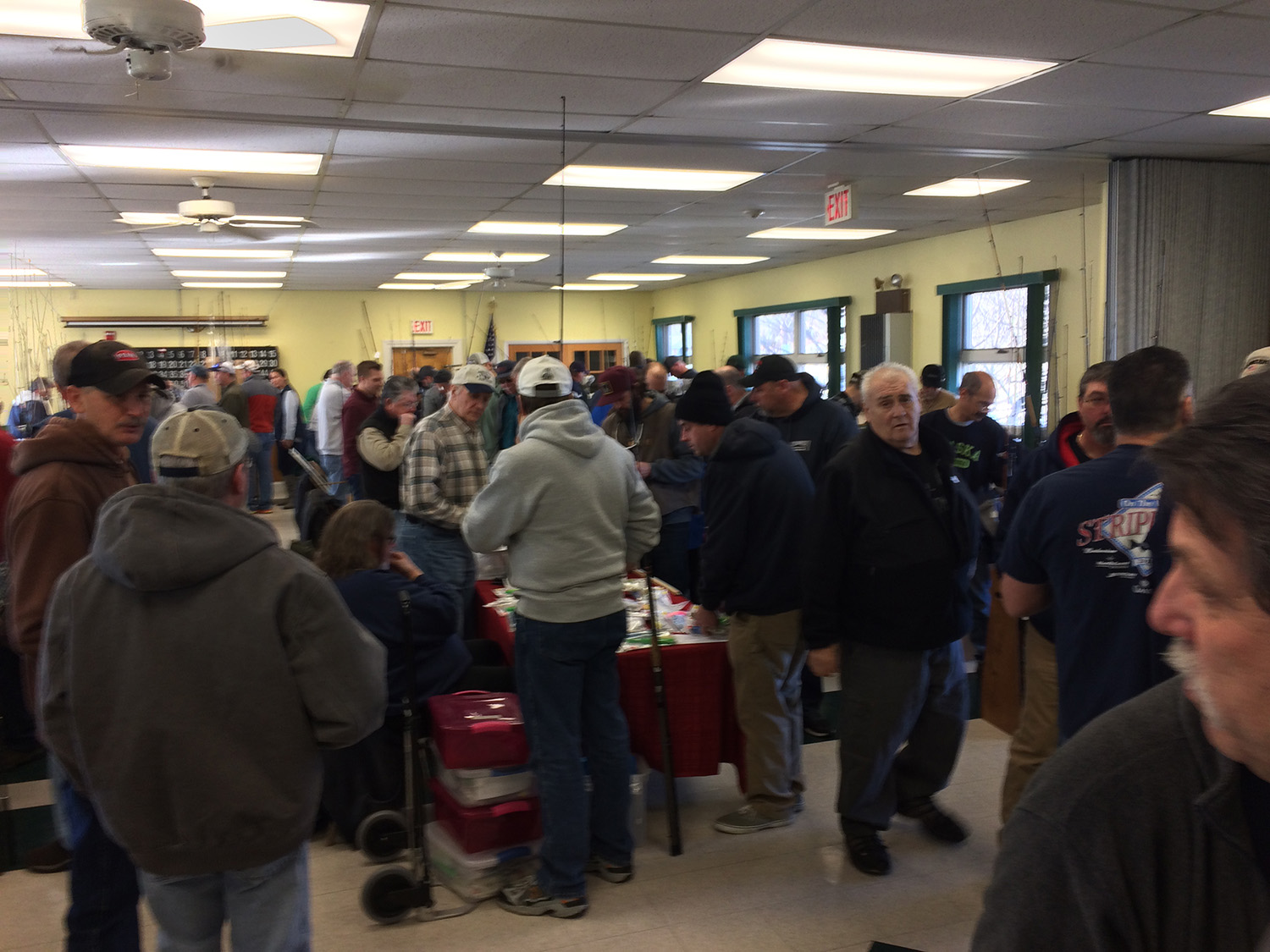 The Narragansett Surfcasters held another hugely successful Used Tackle Sale this past Saturday. Hundreds of people streamed through the Narragansett Community Center, to pour over new and used rods, reels, lures, tackle bags, needle fish and classic collectible plugs. It’s quite and day, with the smell of clam chowder in the air, talk of old fishing stories and plastic bags being filled with gear we must have.

A favorite scene was a fisherman working to get a new surf rod into his four door. 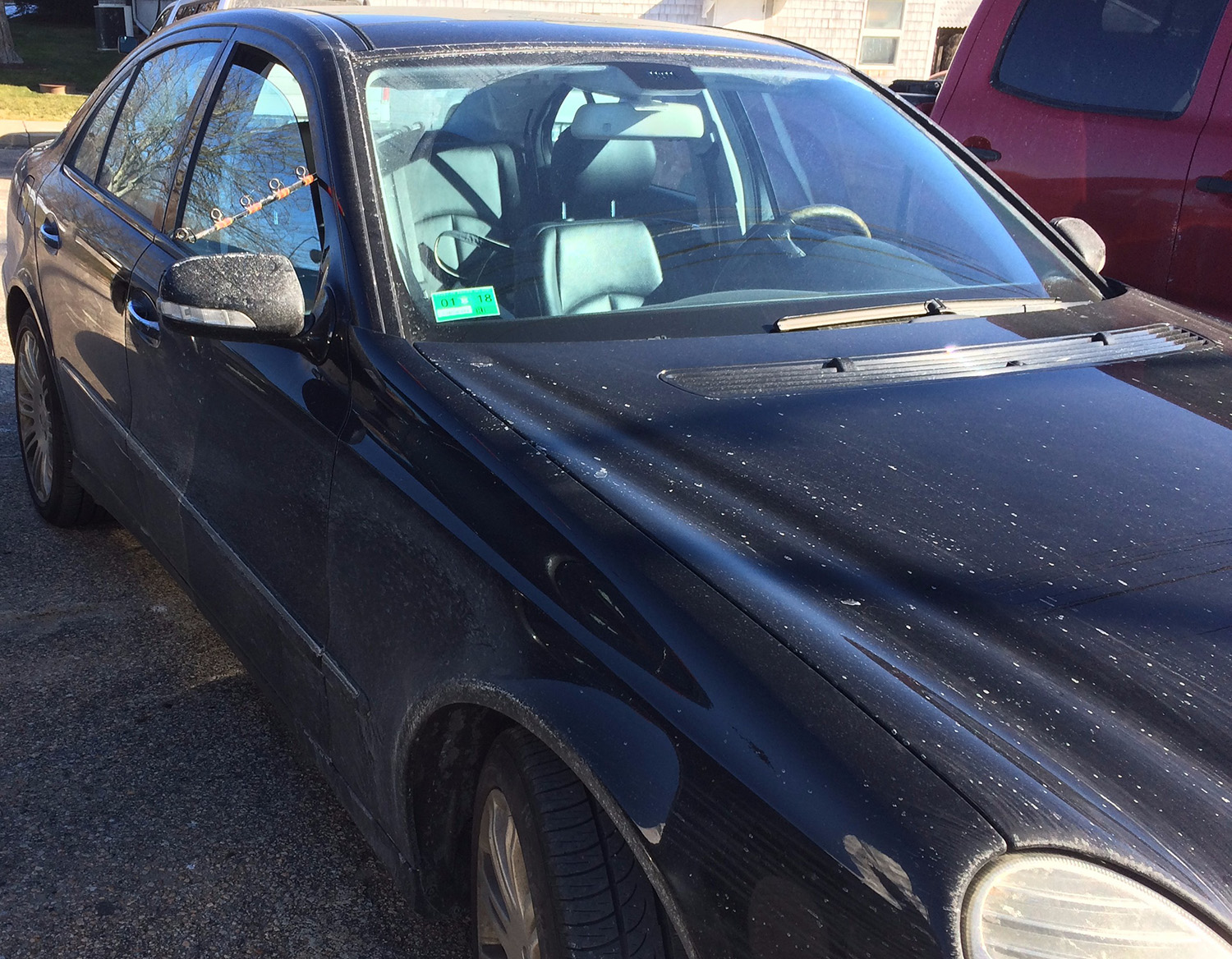 We’re a little out of practice after a few months of cold water.

Cliff and the more than one hundred members meet on the third Tuesday of each month to listen and learn from local speakers. There’s always a spread of pizza and soda and when the fish are in heavy, meetings move to Snug Harbor Marina so they can roll out the bar-b-que. Monies raised go to several favorite charities in Narragansett and South Kingstown throughout the year with holiday gift baskets being a favorite donation.

Their next meeting will be on February 21 at 7 p.m. in the Community Center, 53 Mumford Road in Narragansett. Local fisherman Dave Pickering will talk about “Discovering Carp Fishing”.

Just in time for the greatest of all the Hallmark holidays, Sven and his team will host a couples competition at the Peace Dale Shooting Preserve. The event starts on February 11 at 10:00 a.m. on their Executive course and for just thirty dollars per couple you get to shoot fifty targets each and couples share a raffle ticket which might just win them a $75 gift card to the Chophouse Grille and a bottle of wine. You can call and register at 401.789.3730.

Here’s one to mark on your calendar. The RI Environmental Police Officers Association will hold a sporting clays shoot at The Peace Dale Preserve on April 29. In an effort to raise awareness of the International Wildlife Crimestoppers, entrants will compete for Top Shooter, Top Youth Shooter and Top Team. Your tickets includes a raffle and pig roast. To sign up or sponsor a station or a team, reach out to Michael Schipritt at 401.742.5169.

The Atlantic States Marine Fisheries Commission is looking to hire a Temporary Field Technician to assist with the Access-Point Angler Intercept Survey, also known as APAIS. If you have ever been approached by a surveyor as you returned from a fishing trip, you know This important roll serves to collect data from fishermen. Their job is to engage as many anglers as possible, gather some very basic data about effort, catch and release and add it to a spreadsheet. Your name and abidance of fisheries laws are not being considered. They are not enforcement people and likely just want to get the blanks filled and move on.

In years past, surveyors called people at home but with the advent of caller id and the dramatic drop in land lines, they are relying more heavily on personal interactions and mailed questionnaires. To increase pressure on states to gather as much information as possible, NOAA now considers a missed angler as a refusal. This means if you and your fishing buddies get approached and only the guy stuck carrying the cooler stoops to answer questions while the rest scurry for the truck air conditioning, the ones who got away actually work against the state’s numbers and funding. The bottom line here is to take a few minutes to answer a few easy questions; answers have consequences when it comes to future rules.

It’s a good job. You will need to be available for a minimum of three, six-hour shifts per week, work weekends and on head boats.  It pays $13.50 to $15.00 per hour and you will be based in South Kingstown. If you have an interest, you can reach out to Laura Leach, Director of Finance and Administration, Atlantic States Marine Fisheries Commission, 1050 N. Highland Street; Suite 200 A-N, Arlington, VA 22201 or email her at asmfc-jobs@asmfc.org and put the vacancy number 0021 in the subject line.

RIDEM will hold a public hearing at Corless Auditorium on URI’s Bay Campus on February 13. This round will discuss proposed amendments to regulations for recreational summer flounder, tautog, scup and sea bass, commercial tautog and bluefish. Part XII will deal with striped bass for recreational, commercial and floating fish trap sectors.  The commercial harvest of menhaden and proposed amendments to shellfish management areas will also be discussed. The meeting starts at 6:00 p.m. and if you want to be able to say you were part of the process, this is the place to speak.

The RI Saltwater Anglers Association have moved their meeting place, once again. Their monthly home of many years closed with little notice so they shifted to The Villa, which then also closed. Meetings will continue to the on the last Monday of each month and will now be held at West Warwick Elks.

Food and drinks are always available; this month’s speaker will be Ryan Collins who will talk about Walking and Surfcasting the 27 Miles of Outer Cape Cod. The meeting starts at 7 p.m. on February 27.

RISAA President Steve Medeiros, based on his constant level of involvement, total dedication to the protection of recreational fishing and steady, positive disposition, must not sleep a wink.

Both fishing clubs are important parts of our fishing communities, both offer a great return on dues and both have charity built into their fabric. Maybe there’s not a lot of fish around in February but it’s a perfect month to join a fishing club, grab a slice of pizza or ask where the chowder is and start offering your own tales and tips.

there are sooooo many fish around…

Here's a link to the ASMFC Amendment VI which is all about protecting striped bass. There are several options in there and I would suggest the Status Quo option only ignores the obvious and does nothing for a fishery we love and even depend on....
Keep Reading

Just this side of the Harrisville Mill Pond dam, a few people leaned over to cast worms into some roiling waters, a few others stumbled around, palms up, squinting while waiting for some silly, animated pseudo-life to appear on tiny screens and across the street, in a...
Keep Reading