Crazy Albert and catching two rainbows with one cast

Dock talk is still all about big bass keeping to themselves at the top of Narragansett Bay. South coast fishermen are finding piles of schoolie salt pond stripers but few keepers. Cinder worms have made only fleeting appearances while sand worms appear to be increasing in numbers. Kayak anglers may see more opportunities as squid and bass work their way south. One report focused on how the bite stalls with the tide, in opposition of Crazy Alberto Knie’s well-researched theory of hungry stripers taking full advantage of a slack tide.

Reducing Knie’s decades of experience to a quick synopsis, he believes that during this temporary, restful interlude, bait fish take advantage and search for a better hiding spot to avoid detection and inevitable consumption. Smart stripers understand this then hone in on those moments of poor judgement. Calm water, Knie believes, may be a most opportune time to catch a big fish. All this comes, of course, with a complete understanding of what smaller fish are present, what bass are feeding on, where structure exists and how long slack water will last.

The man sure does catch some big bass.

“Straight lines mean tight lines,” said veteran fluke fisherman Tom Woods. Speaking at a recent RI Saltwater Anglers meeting along with Rich Hittinger, Wade Baker and Newport’s Richard Laurie, stories and secrets for catching more of those fluke were presented to a membership eager to get bring some dinner over the rails. Fluke fishermen have started finding some success around Block Island and along where there used to be Five Cottages.

As more squid arrive, so should the numbers and sizes of summer flounder which seem to be holding in most spots just under the new minimum size of 19”.

Laurie offered plenty of dry counsel for keeping lines wet. “We definitely go when they’re biting,” he said. So helpful.

Discussion ensued about fishing up or down slopes to which Laurie added, “You just gotta be where the bait is.”

Squid won out as the favorite bait but fluke or sea robin belly, slivers of dogfish and bluefish strips were a close second. The panel praised colors for beads, like blue and purple for deep and pink for shallow waters. Captain Wade warned, “If you’re not moving, you’re not catching.” Because winds, tides and currents are so critical to getting on top of and staying with fluke, there was consensus that an Eldredge tide book was a must to establish which way you might end up facing or drifting. Tom also offered that larger hooks, in sizes 4/0 to 7/0, are easier to remove from smaller fish.

When asked how long fluke will stay in local waters, Mr. Laurie simply replied, “We stop fishing for the season when they stop biting.” Class dismissed.

From the RIDEM desk, residents are being asked to lookout for wild turkey hens, with or without broods. The state estimates 3,000 turkeys call Rhode Island home and thanks in part to a 16 year turkey relocation program funded by hunting license fees and the Federal Aid to Wildlife Restoration program, towns including Foster, Scituate, Tiverton, Exeter, Burrillville and Little Compton have all seen in increase in population.

No word yet if a similar program is being considered for Smith Hill. 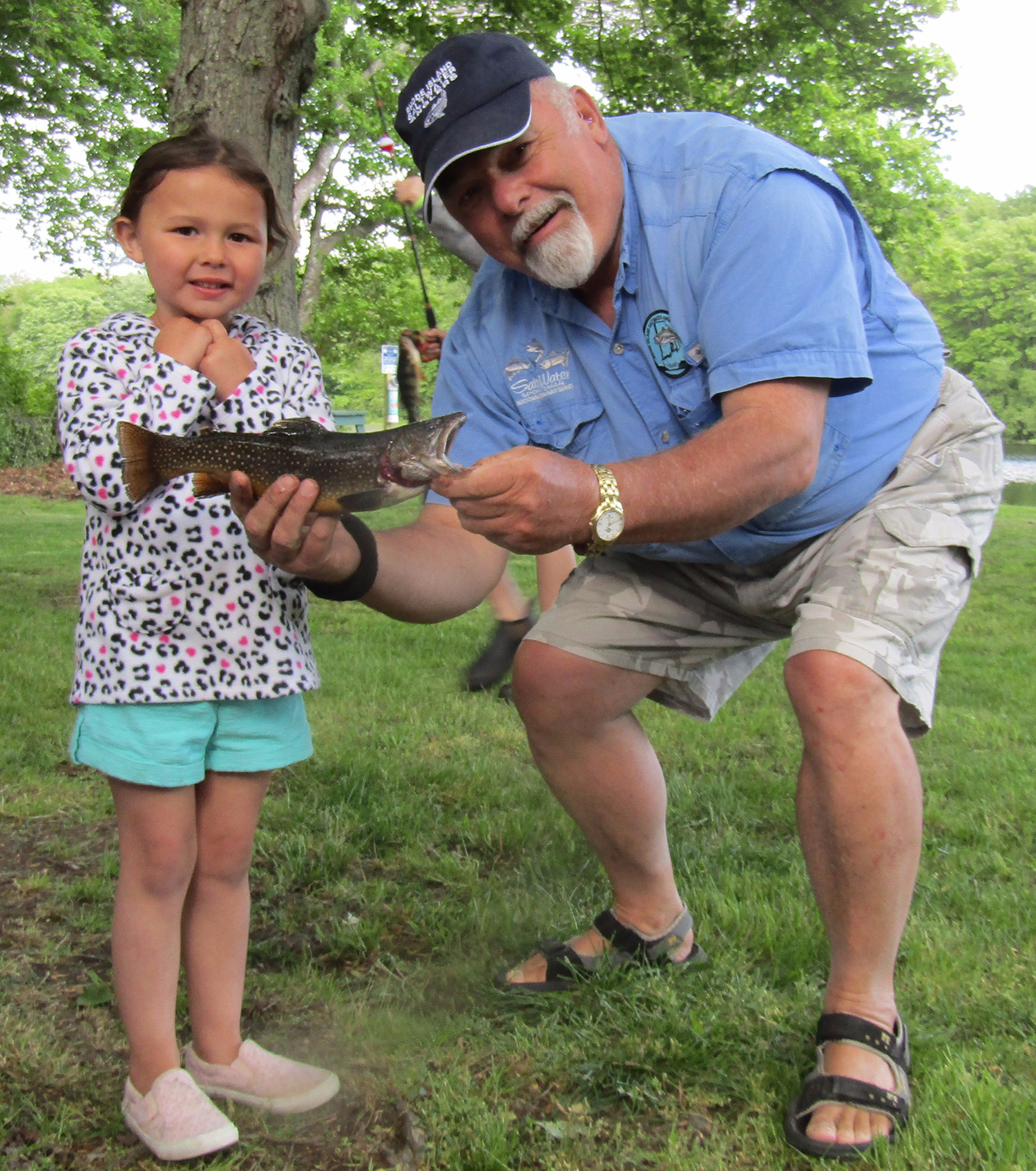 Clouds approached from the north, laden with rain. Thunder echoed from the South Kingstown High School baseball team just over the fence at Old Mountain Field. Fishermen and women from ages three to fourteen lined the grassy banks, hoping to fool a brookie or see a rainbow. Certainly it was an exceptional day for the kids, with far more fish being caught compared to years past.

For 90 minutes, trout, perch, hornpout and one very grumpy catfish were hauled onto the banks, many were weighed for the contest and most were safely returned to the pond. Then up walked Emily Kintner.

With the sweetness of a young girl and the joy understood by fishermen of any age, Emily weighed in a fine brook trout that fell for her long cast. Leaving the scales, she posed for a quick picture, smiling with happiness and just a touch of apprehension. Then came her brother Gavin with an equally fine trout. Apparently the Kintner family has this trout fishing all figured out.

Gavin Kintner. This young man can catch some fish

Gavin and Emily fished right at the edge, where shoes get wet and hands get muddy. Their parents were close and patient. Odds are good for lots of tangles when kids cast each and every way but these two showed experience. Gavin and Emily hauled in a brace of trout right through the rain, each with that big and genuine smile that reminds us why we go fishing in the first place. As kids packed up their gear or left poles on the grass for Mom and Dad to collect, prizes were awarded for several categories while a hazy double rainbow graced the southern sky. 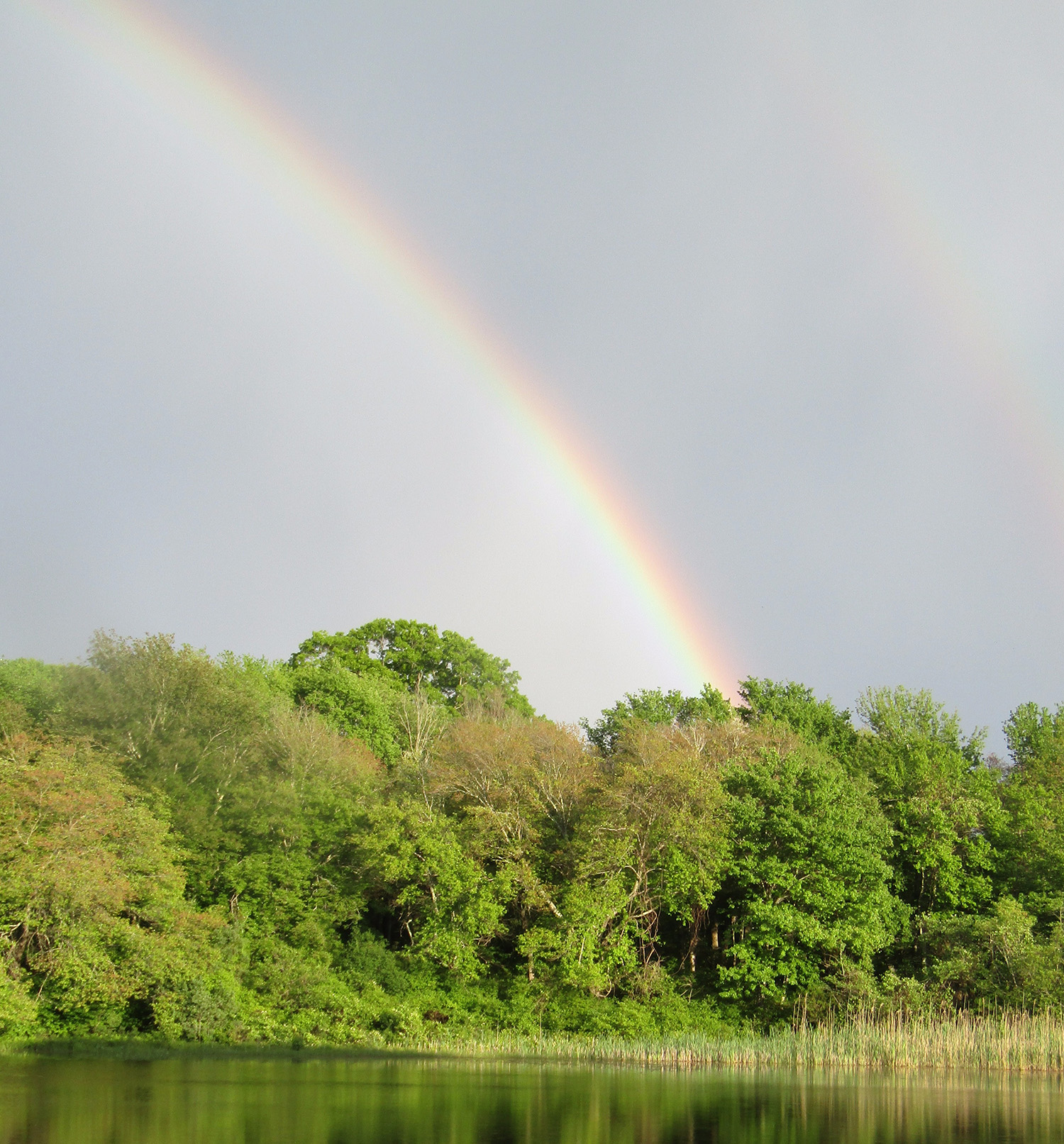 Like older fisherman, the ones who lean over gunwales staring at rod tips, tip-toe across slippery breakwalls with a deftness saved for darkness and kneel on grassy farm pond shores as wet earth muddies their knees, I suspect Emily and Gavin had much to talk and laugh about on the way home to Middletown.

On February 21, my good friend Peter Jenkins at The Saltwater Edge hosted another excellent Surf Night. Peter brought in Dave Anderson and Gerry Audet to walk us through finding fish on a make-believe spot they’re calling Mystery Island. The deal was, based on all...
Keep Reading

Seems the HOV lane is open to the Cape Cod Canal. Last winter, Peter Vican and Don Smith gave a talk to the RI Saltwater Anglers Association about how they used to catch big stripers south of Block Island. They fished a few honey holes, mostly at night and with eels...
Keep Reading