It was a long awaited Friday night fights in South County salt ponds.

Finally a full day of warming sun brought cinder worms from the mud to a muddled windy surface so the dance could be begin.

the infamous and reliable Cocahoe Minnow

It was a worm hatch like you read about, which we hope you read about here and while white Cocahoe minnows worked fairly well for spin fishermen, it was small red or pink imitations with a gentle wiggle of an eight weight tip that brought stripers to the boat this night. A sharp and fiery shimmering shad was even landed. Shad are Alosa sapidissima with the latter identification translating to “good to eat to a superlative degree.” They are indeed delicious but more gratification was had by its release. The ancient cinder worm mating ritual is just one of Nature’s many fantastic celebrations of life, reproduction and possibly just a wonderful excuse to wiggle, shimmy and shake the night away.

While schoolie bass continue to hold a majority, bass in the 24”-30” were also gorging themselves along slight channel breaks and holes washed clean by rushes of cool incoming sea water. A few patient fly fishermen have been securing their boats on stretches of sand flats then wading to those gradual edges where tides carve a path, delivering hapless bait and aggressive stripers. Night regained her control. A giant red moon peeked over rows of houses lit with party light strings new for summer, smoky from the seasons first backyard pine wood fires. 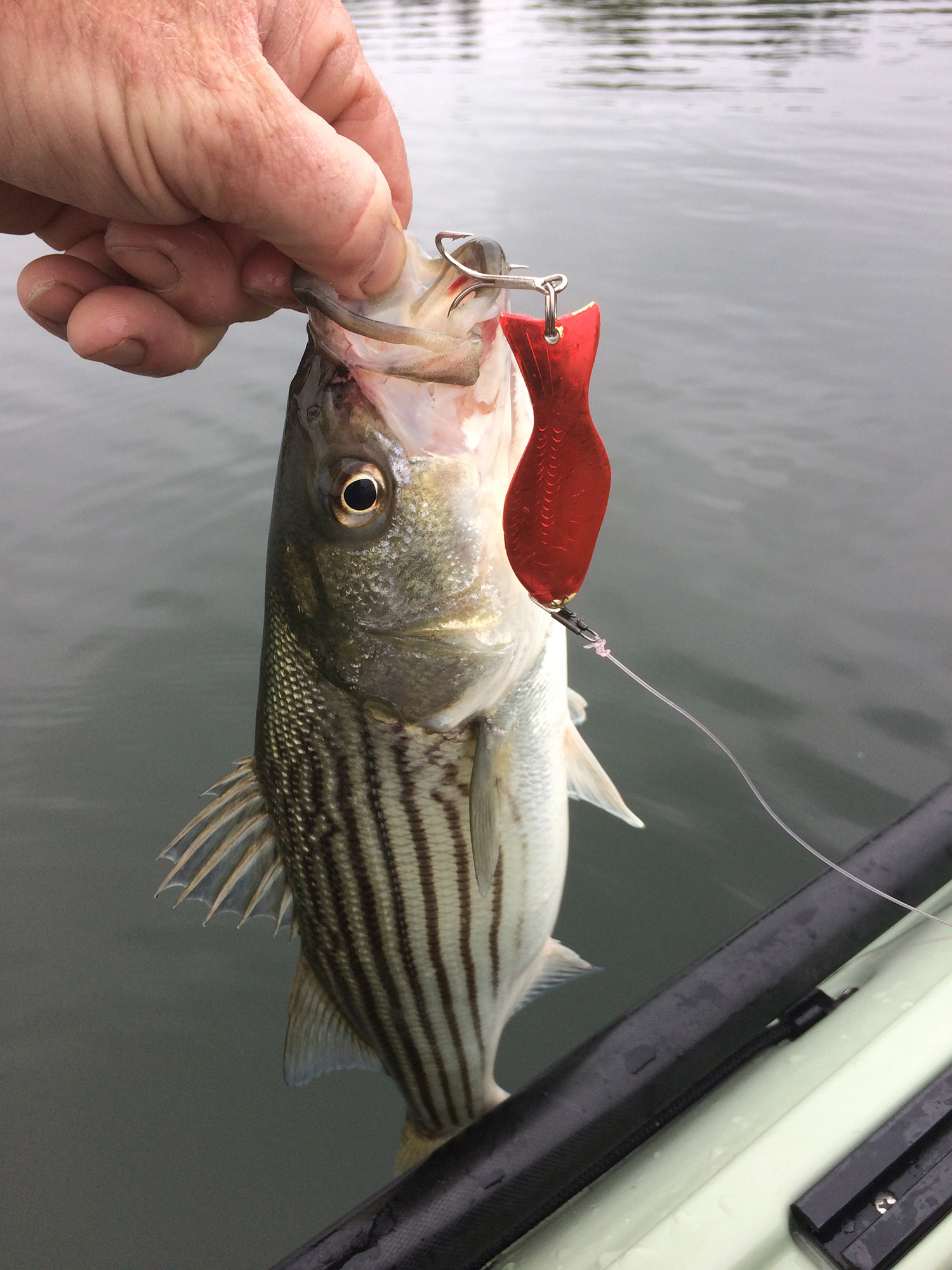 a young bass and a nice red Al’s Goldfish

A persistent south wind kept a small fleet of kayakers drifting here and there, wary of occasional twin outboards bent on impressing someone while keeping fish down.  For night fishermen, there’s something wonderfully spooky about that great sucking sound as a big fish inhales a half dozen worms alongside your boat. It’s equally impressive to see so many fish cruising salt ponds, protected by darkness as we await the really big fish to leave the upper bay.

With that big moon and strong tides, fishing has been red hot all over. Live-lined pogies remain the best bait option for northern fishermen but as the pogie school thins and more squid head for open water, more guys will reach for opaque plastic boxes jammed with a jumble of lures. Surfcasters will have their day, or night, fighting from slippery Beavertail slopes painted so roughly and perfectly by now passed, much missed artist Tom McAleer. Big Danny’s and live eels will be thrown into spin cycle white washes all over the south coast. Summer is near.

“This is one of the best populations of school stripers I’ve seen in 15 years of guiding,” said Captain Rene Letourneau of On The Rocks Charters. 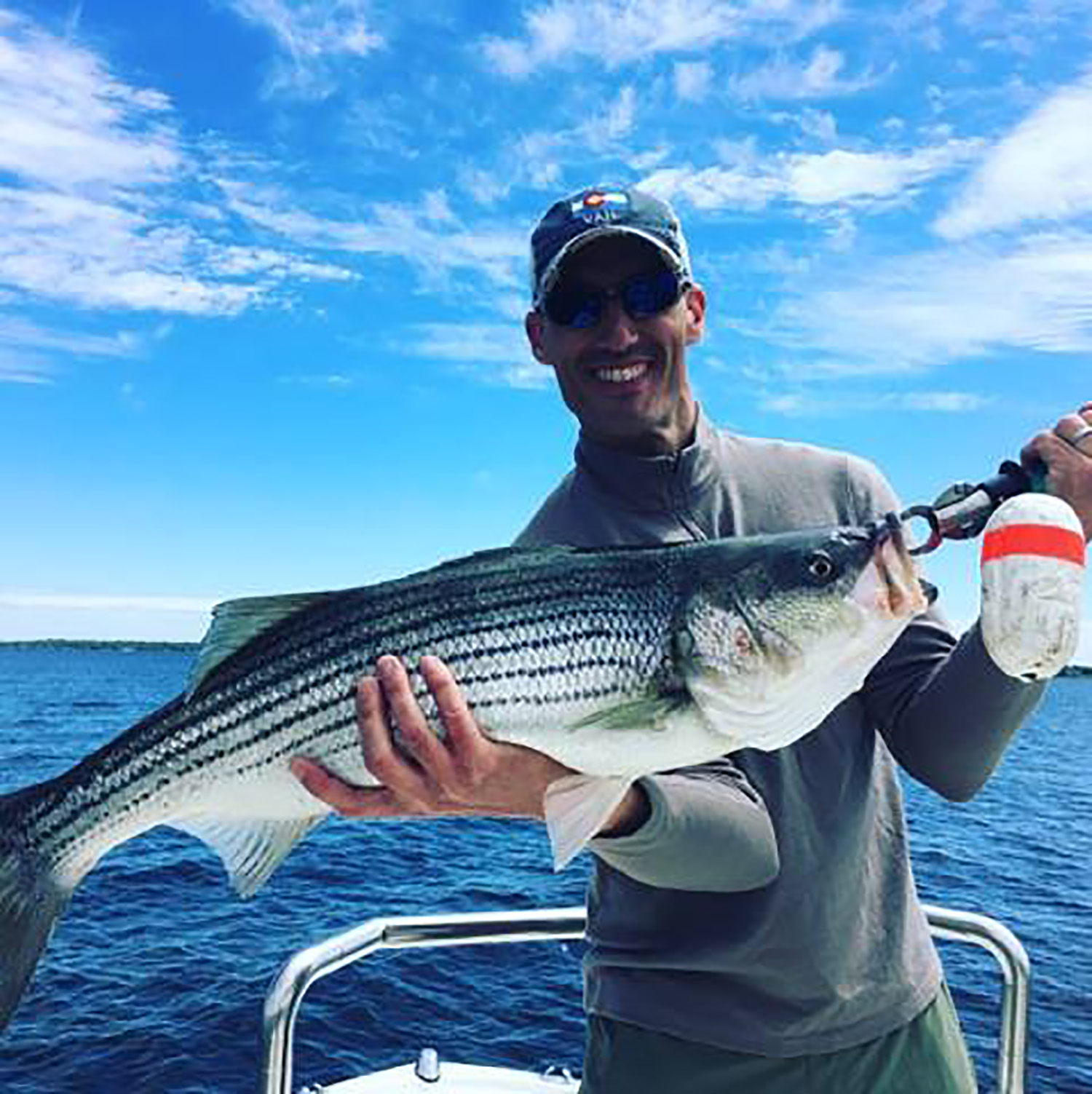 Sport Jim Reardon holds a whipper of a striper

While the larger stripers may be feasting on snow bird pogies, there are plenty of fish all over. This past winter surely was the best holdover striper fishing in years with plenty to be found in rivers and salt ponds, in shallow and deep waters, on white top water D.O.A. poppers, off the shelf freshwater crank baits and classics like Al’s Goldfish and small . In an era of struggling fisheries management and more than one declining fishery, striped bass is as close to a success story as you can get.

“I’m a fly fishing light tackle guide, I prefer throwing artificial baits or flies along Rhode Island’s shoreline,” said Letourneau, adding, “In the past two weeks, hundreds of stripers have come to the side of my boat. Fly and light tackle anglers are connecting. Most fish are between 15 and 23 inches with some bigger fish mixed in.” Leaning against the rails of Rene’s immaculate Mako Marine 21 and really, she’s immaculate, it’s a fisherman’s dream to swing an eight or nine weight into a school of blues tearing through dinner or to swing sinking line to deep water stripers lurking around giant boulders. 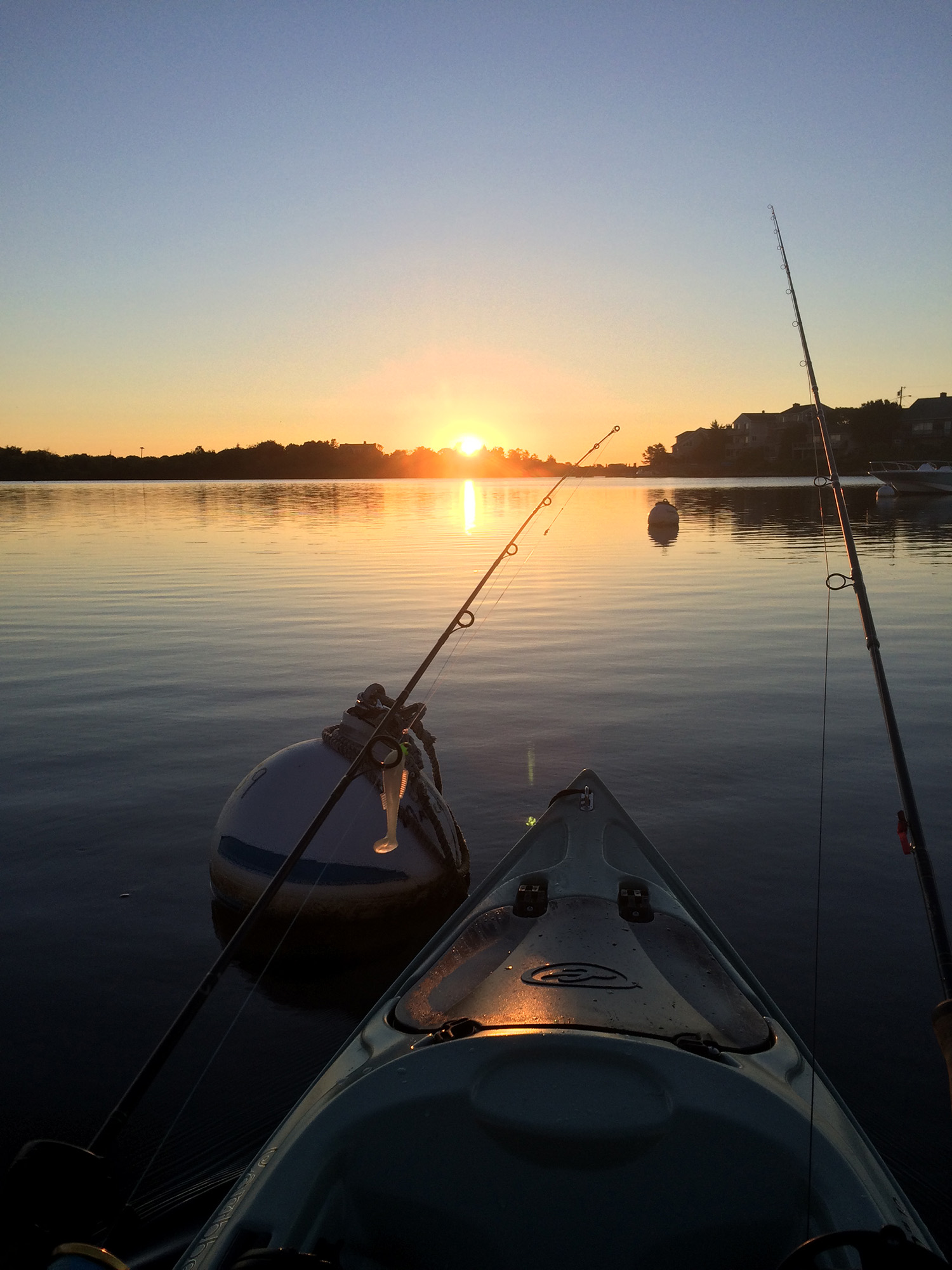 “We did it the old fashioned way, we worked for them, moving rock pile to rock pile, along the rocky shoreline,” said Captain Letourneau, referring to last Friday’s sport, Jim Reardon. Some days, working for fish is the job.

As in salt ponds, the majority are smaller fish. They landed 40-50 schoolie bass, “Nothing over 25” but all nice, clean, healthy fish. This speaks volumes for the future of our fishery,” the Captain said. Jim worked a needle fish on ten pound test in five feet of water to outsmart a fine 15 pound striper. Schoolie size by no means translates to less action. “The action can be fast and furious…most fish can be caught with plastic baits but several fell for top water plugs,” he said, noting, “Add aggressive bluefish, yes they are also in the game. This is fly fishing and light tackle heaven.”

This recent transition to almost summer heat means water temperatures will rise quickly which in turn means fish will respond. “Some bigger fish will start to move out of the river and into the Bay as the water temperature warms. Things only get better from here, as the weather improves. Patience does pay off,” said the Captain. Well, here’s to that improved weather, long days on the water, the love of catching fish of any size and enjoying the success of a healthy striped bass fishery.

5 Tips To Stay On The Ice

Stay on top of the Ice Despite a lack of hard water, it really is ice fishing season. RIDEM recommends at least six inches of ice before we drag out coolers, chairs and grills while Connecticut calls for just four inches. For safety’s sake, it’s our job to check for...
Keep Reading

Brian Hall is a pretty supportive guy. He’s a veteran, a fireman, a husband, a relentless kayak fisherman and a rock solid friend who calls some lucky people, “brother.” Brian's had some intel on schools of early morning albies and called in fishing partner Tom Adams....
Keep Reading

This week we begin a three part series looking into a proposal by Protect Rhode Island Brook Trout. Their work is genuine, guided by a desire to address a potential, not a past. They are four wise men protecting brook trout in Rhode Island and so far, will not be...
Keep Reading

When four anglers talk water and see a river’s future, it’s to protect what we have neglected; their timing could not be better for trout. Meet Trout Unlimited, RIDEM, Protect RI Brook Trout and the Flat River.