Trading anything for more time in the Maine woods 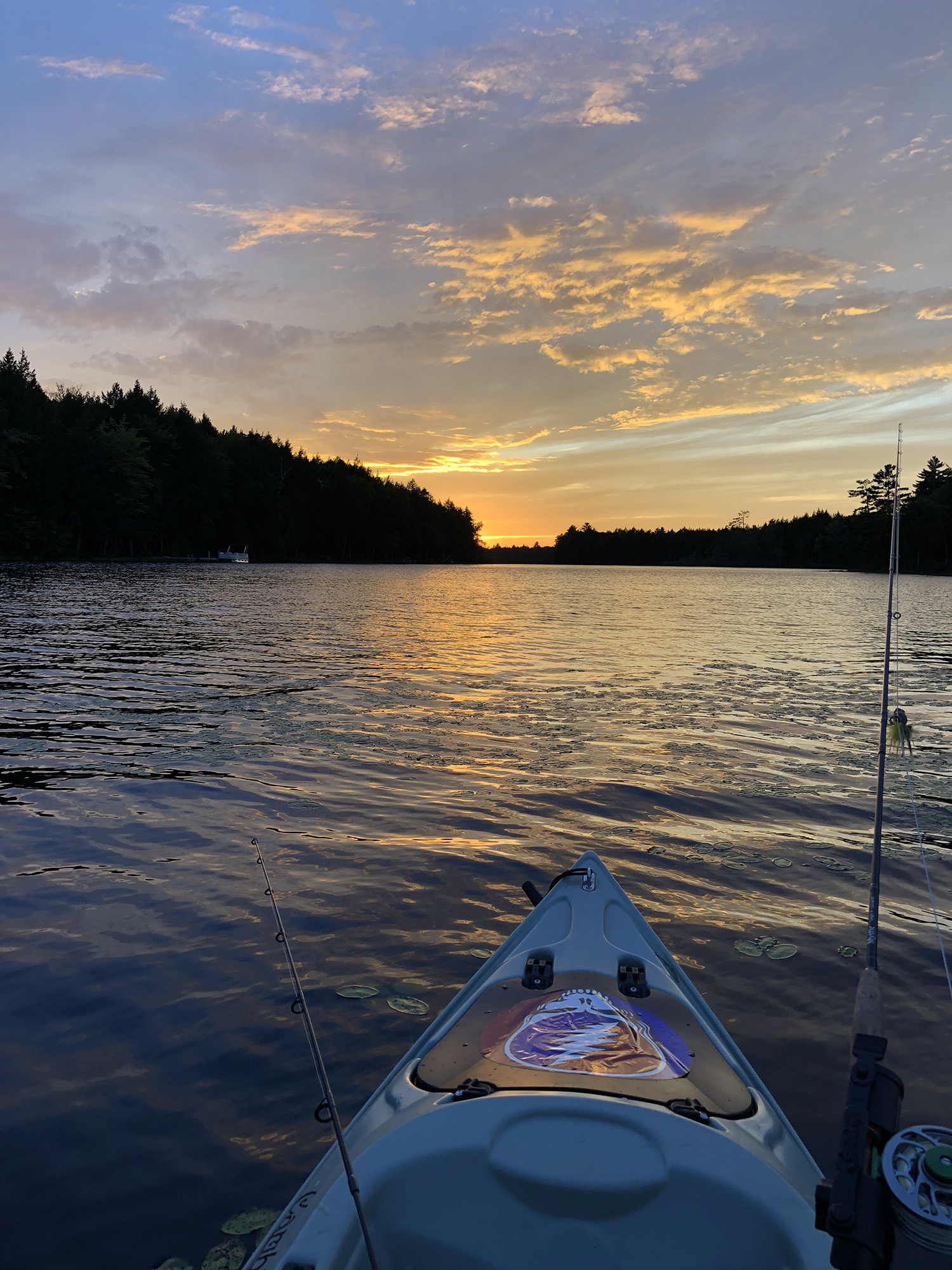 “Sure, I’d say you should use it until the Sheriff shows up.”

That was some solid advice from Mark Peters of Mattawamkeag, Maine, standing in a sweat stained t-shirt, poling a canoe up the Penobscot River, telling us without asking of meeting a missionary from Hell, offering tips for converting young elms into true canoe poles and in reference to an up-river rough gravel access, trading his advice about the law for our attention. 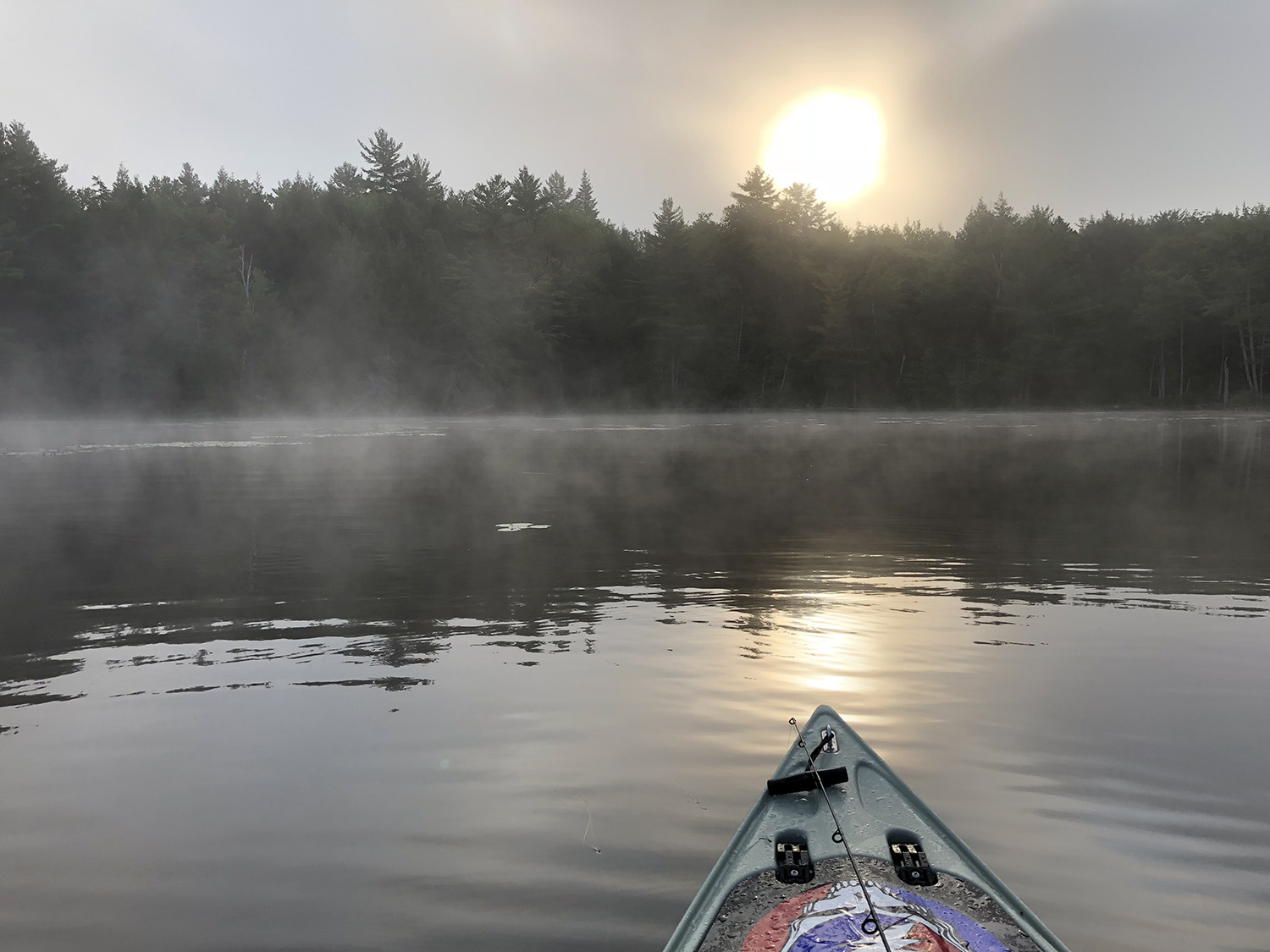 Fishing the north Maine woods is tradition, something built on great anticipation and a bit of horse trading. We trade a busy work week and a less so school vacation for equal time fishing lakes thick with large and small mouth bass and stories from several mouths similarly sized.
As is customary, we stayed at Eagle Lodge and Camps in Lincoln, a welcoming hideaway on two wide, quiet ponds. Lincoln’s a bit of a last stop between Old Town and places with numbers for names, rich with history of logs traded for money and paper produced for a young country. 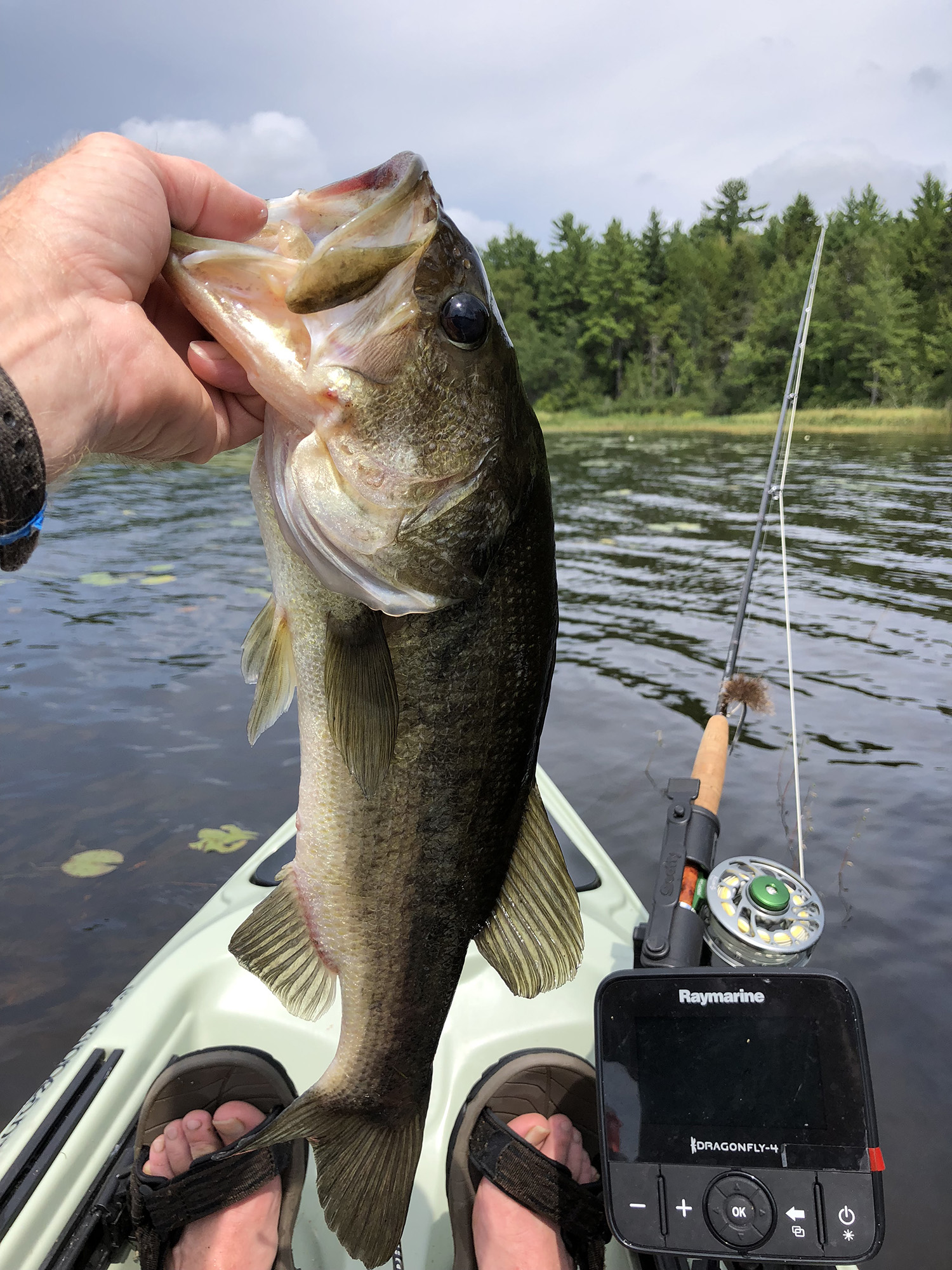 For seven years now we’ve traded hours of driving for the hospitality, fishing guidance and wiry dry wit of owners Justin and Lorraine Morse. They provide cast iron pans seasoned for thick bacon, screened porches for guests trading stories of their years at the camp, docks for happy swimmers and thankfully, no television. When skies allow, there’s music on the radio, both Christian rock and Christian rap. Red Sox games whisper through static but quite clear are all day political commentaries from both sides of the stone wall. Each night, skies are brushed with the longest swipes of stars we seldom see back home when in front of laptops or below street lights.

Loons speak across ponds, reminding us there is no cell phone service; theirs were the only calls we would receive, which was fine. 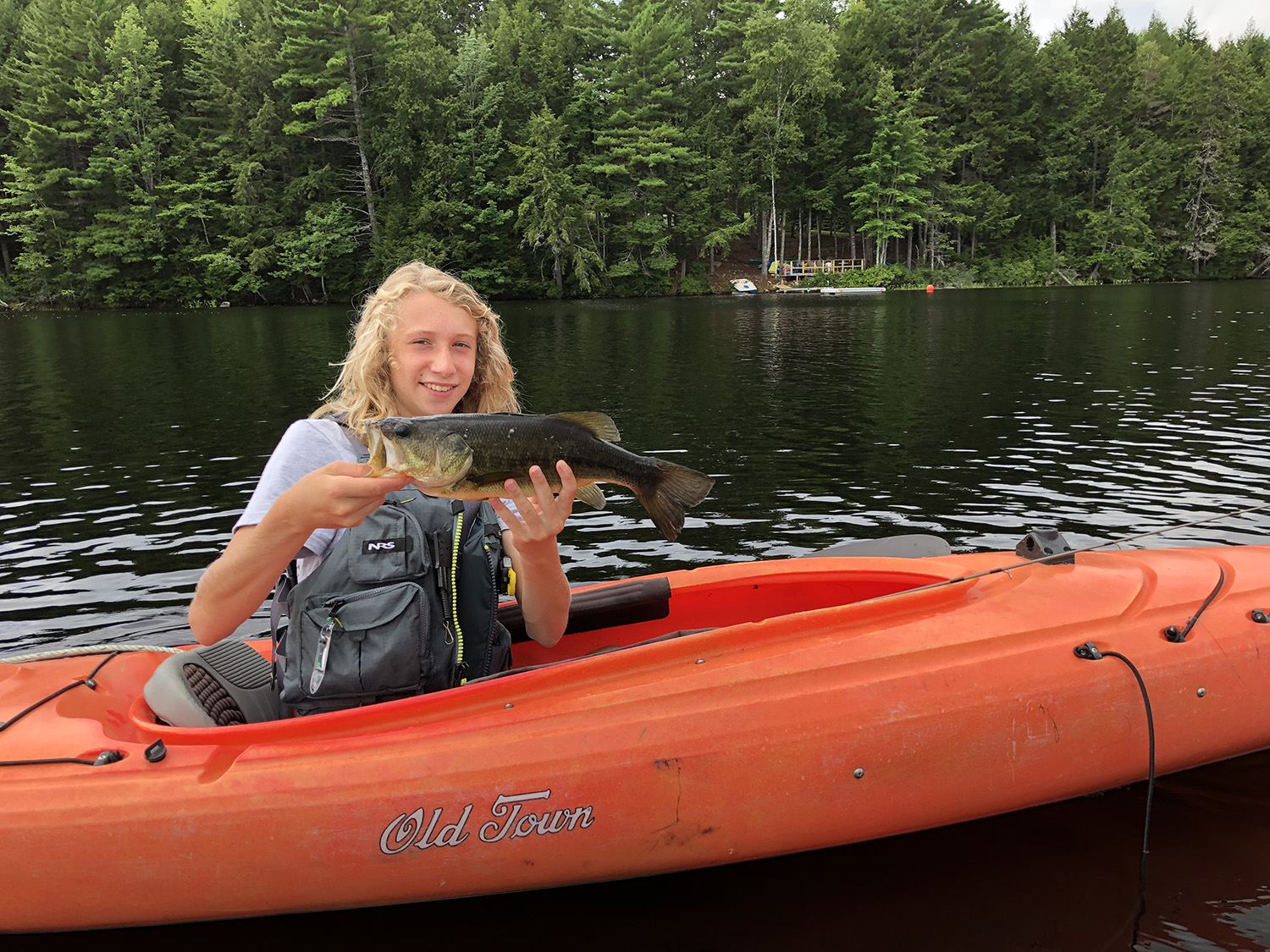 Miles Corayer lands yet another largemouth bass in Folsom Pond.

Traditionally, I trade peace of mind for wasted time. Such excitement for returning to the woods drives me to pack clothing and gear two weeks in advance which means two days before we leave and since no self respecting, adventure fisherman bothers making a list, everything must be unrolled, rechecked, recounted, refolded and repacked. That second round ensures that toothpaste, your best reel, first aid kit and cell phone charger are all left behind. 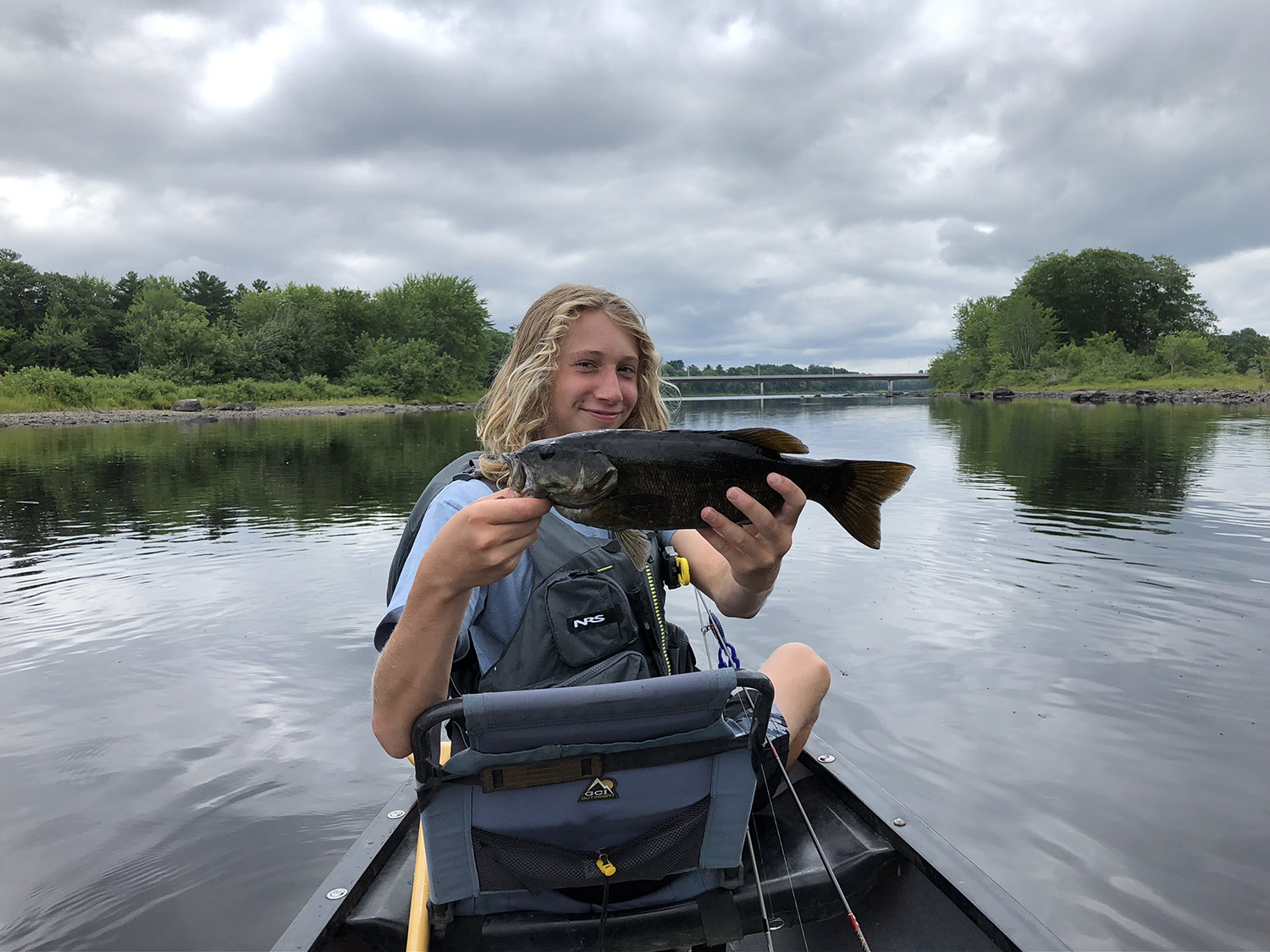 Miles Corayer with yet another fine small mouth bass caught and released from the Penobscot River.

Sunday we traded a perch on Folsom Pond for the Penobscot, where we first met Mark. Justin’s recently traded his Scott canoe for a new drift boat camouflaged as a giant brown trout powered by a thrilling four stroke jet outboard. 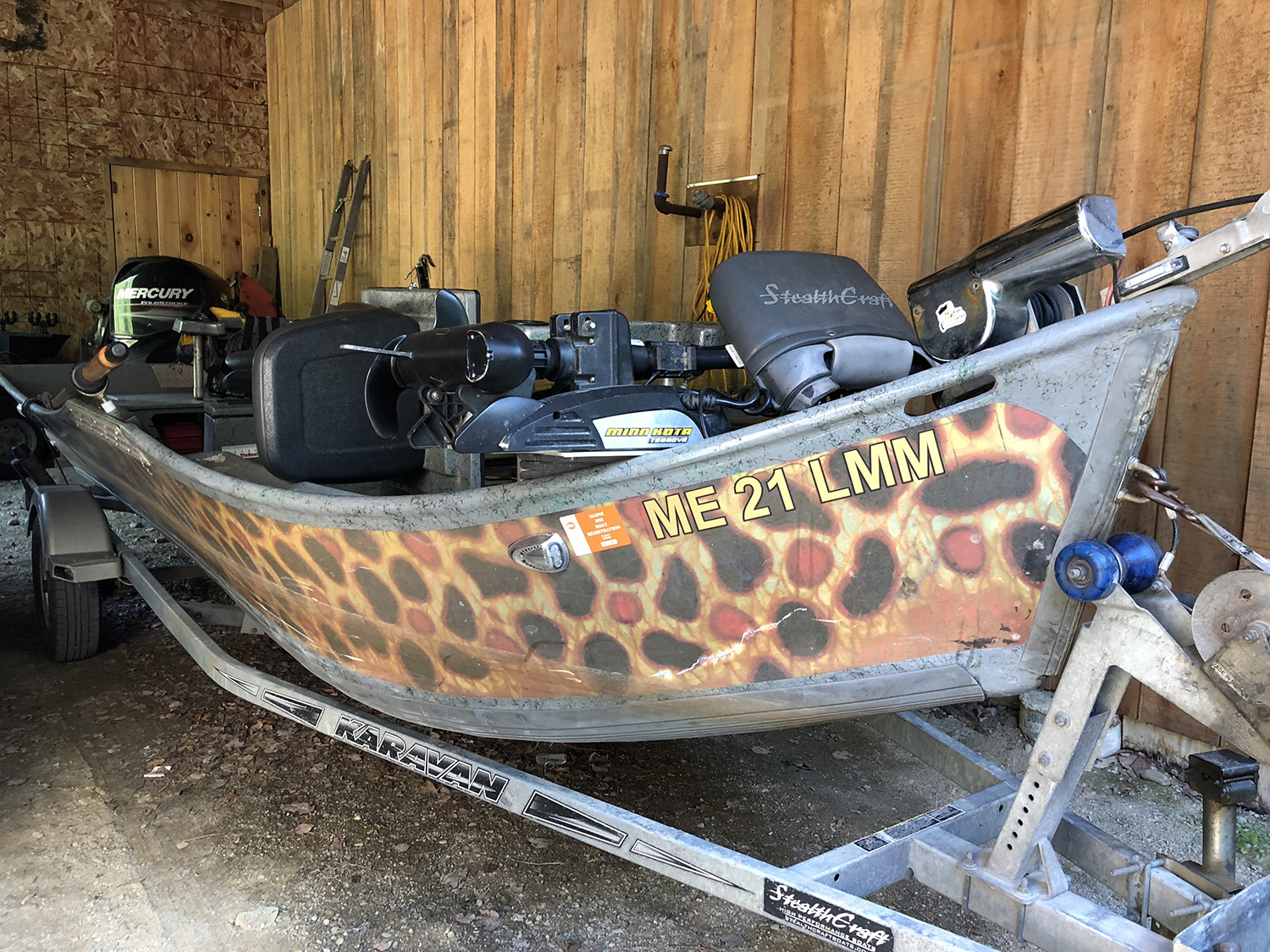 He knows that river better than any; we caught countless bass tucked tightly under sagging maples and near thin creeks trickling around mossy stumps, delivering oxygen, crayfish and crunchy beetles to a shallow river.
The next day we motored south for Howland, a small town with a big bridge above a river full of rubble bending to receive the Piscataquis.

It was family day so we had separate boats. Scott and Teo headed downriver in his gorgeous wood canoe, the kind of craft that makes men flush with envy. Justin, his daughters, father and neighbor Dick left us with some quick directions. 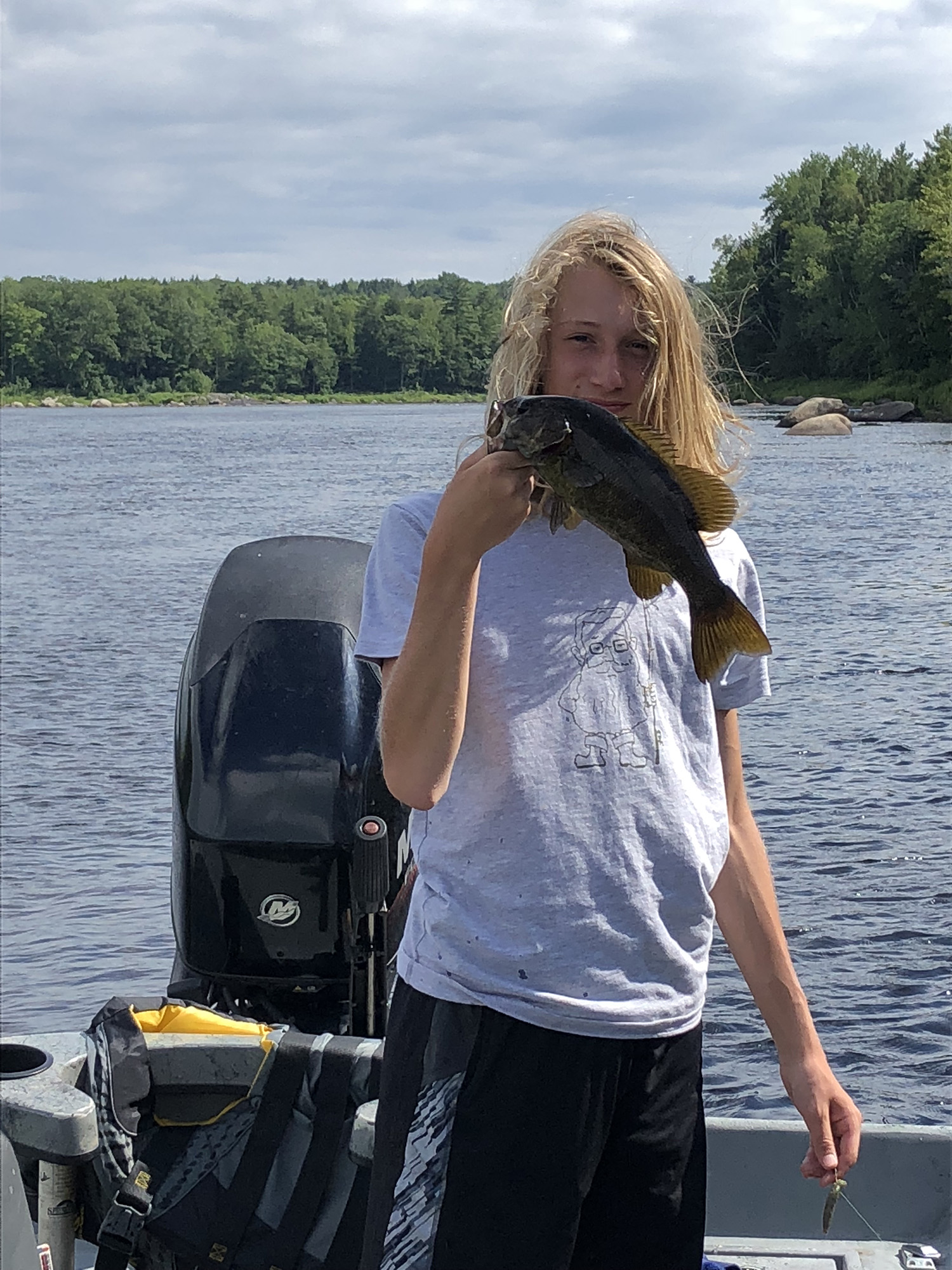 It’s easy for a Maine Guide to gesture over yonder where he’s sure there’s fish as he’s heading up stream at just shy of light speed, leaving us to paddle a plastic canoe in the same general direction with far less ease. Nonetheless, my son and I drifted around shallows littered with smooth stones, abandoned beer bottle bottoms and a scattering of brick halves escaped from a long-faded tannery building. Together they tell a story of man’s fervor for money, disregard for water and eventual change in economies, technologies and priorities. 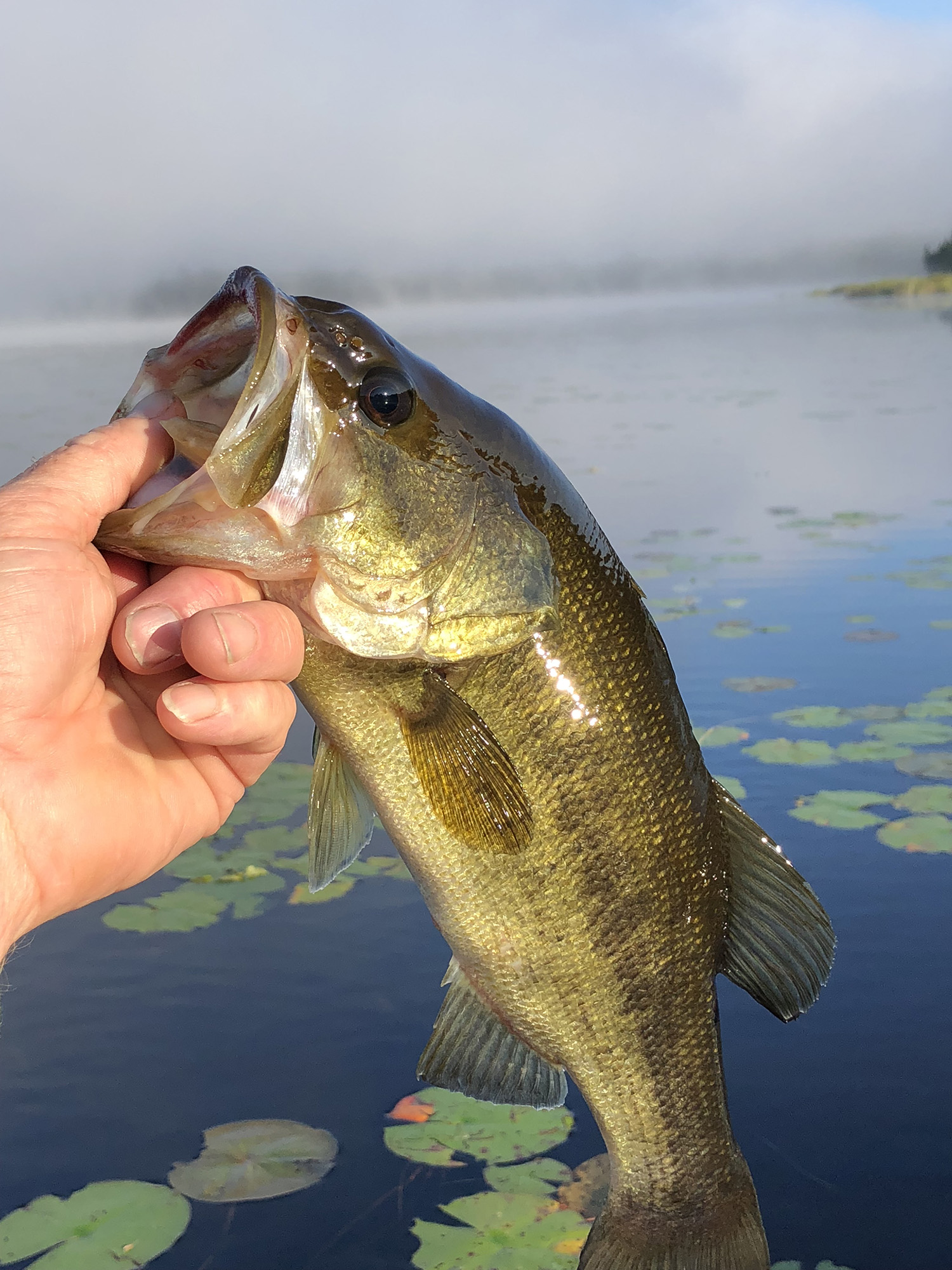 We turned slow circles over countless board feet of submerged timber hand cut in the north country before electric lights or paved roads then floated for Bangor on Spring freshets. Behind boulders and along shorelines tossed with rusting tons of abandoned iron machinery are acres of bass, gorgeous green on yellow creatures brilliantly camouflaged. They are a joy to discover and catch, giving a solid fight in trade for your effort.
It wasn’t all play time. Columns had to be written and delivered. For Fish Wrap’s newspaper column, we traded woods for a Tim Hortons’s which offered tooth aching sugar donuts and free wi-fi, to deliver all these words before press time. Pretty cool, actually. 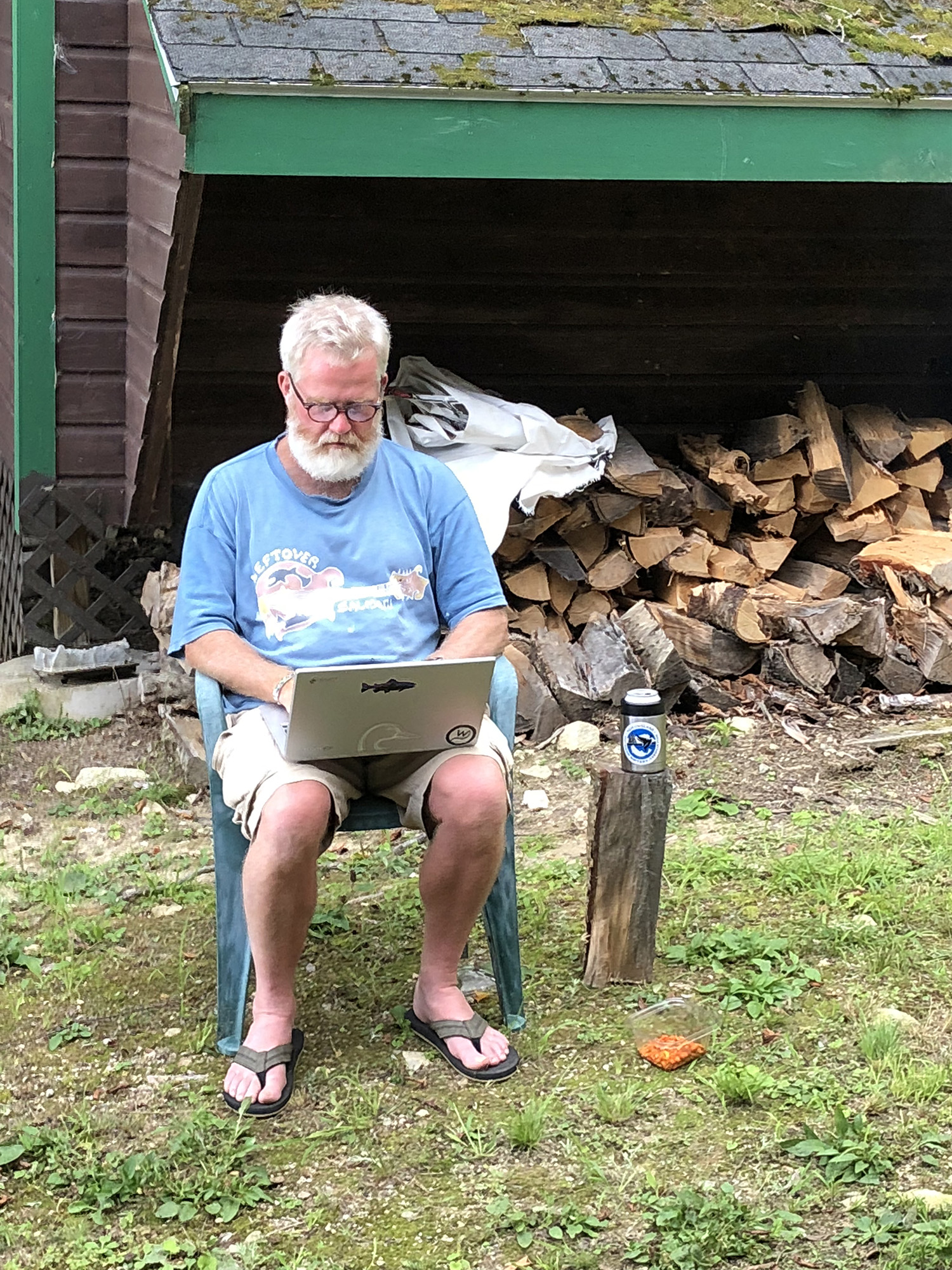 Our new twice weekly FM radio fishing report needed to be researched, written, edited, timed, recorded and delivered, all from my cell phone. Funny thing is, there’s only slim and occasional cell service in the camp so I had to paddle out a sweet spot in a secret reach of Folsom Pond when skies were clear, where there’s a slightly better chance of a signal. From the canoe, Fish Wrap was delivered after only a few takes and a giant bald eagle slamming a fish a hundred feet behind my back. Then it was a quick paddle to the west to catch a nice largemouth, taking in a morning sun and some cold coffee.
For the rest of the week we traded that river for rediscovering the two lovely lakes within view of our Hideaway cabin. 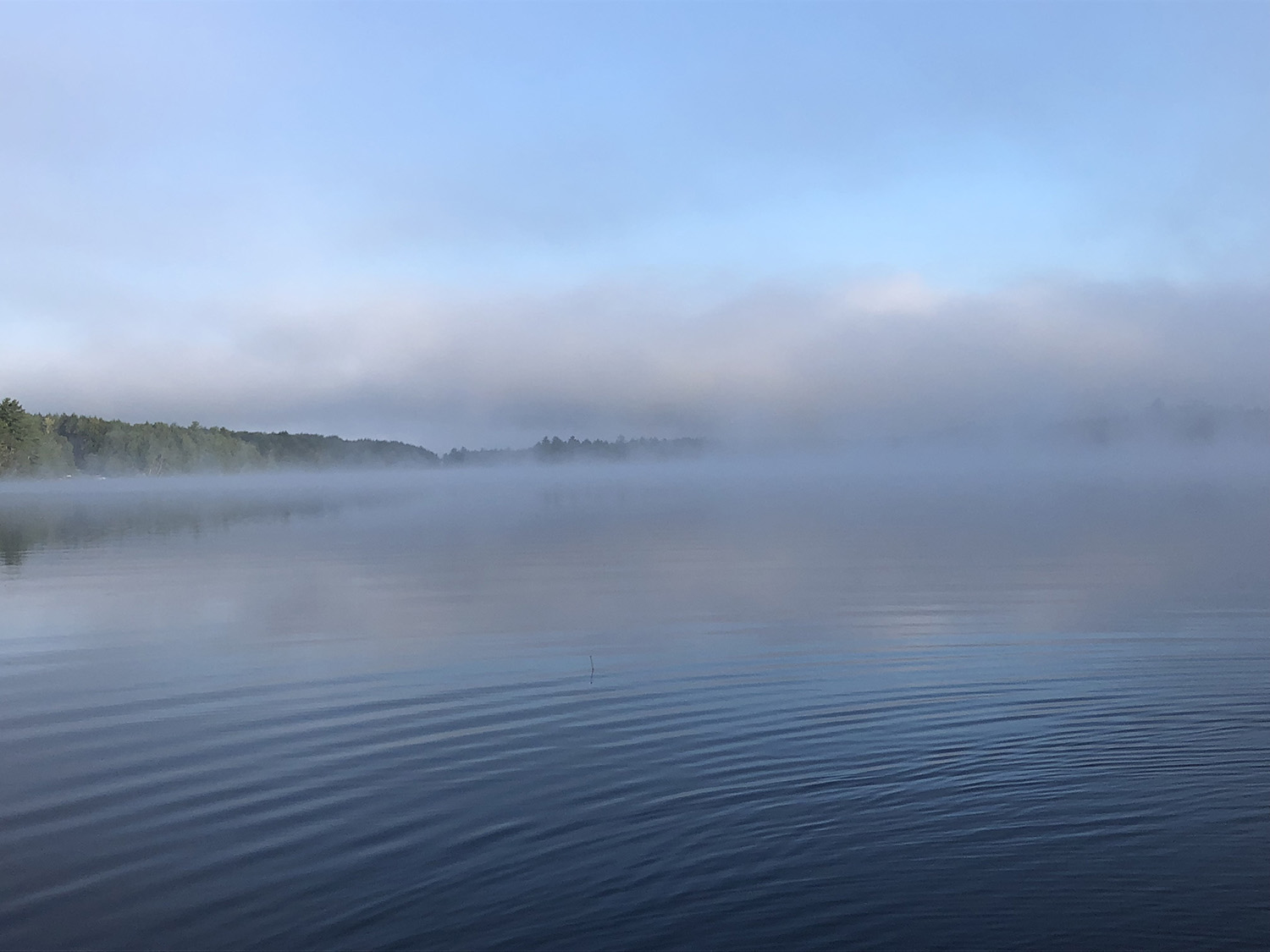 We’ve come to know them quite well and love them quite a bit. One night we paddled into a small cove loaded to the gills with bass and pickerel thriving in such weedy waters. It was dark save for some last throes of twilight clinging to tips of straight fir and tall spruce frosted with new greens. As darkness consumed us, we unwillingly traded that twilight for solar light; in the small curves of a fair pond in a great swath of woods, we became surrounded by plastic dock lights. Positioned in lonely pairs, they guarded no one from nothing for no reason.

They reminded us of how things change and how the lovely ink of nighttime sometimes yields to progress.

We paddled for camp, avoiding the tiny street lights.
As the week moved along, clouds piled up on each other, lightning danced to the north, forecasts of thunder with rain fell apart in rising warm air and stubborn winds.
Days mattered only as we approached check-out.
Ponds and rivers delivered on the rest we asked of them.
Fish came to the net in more numbers than we could scribble on our pocket notebook. 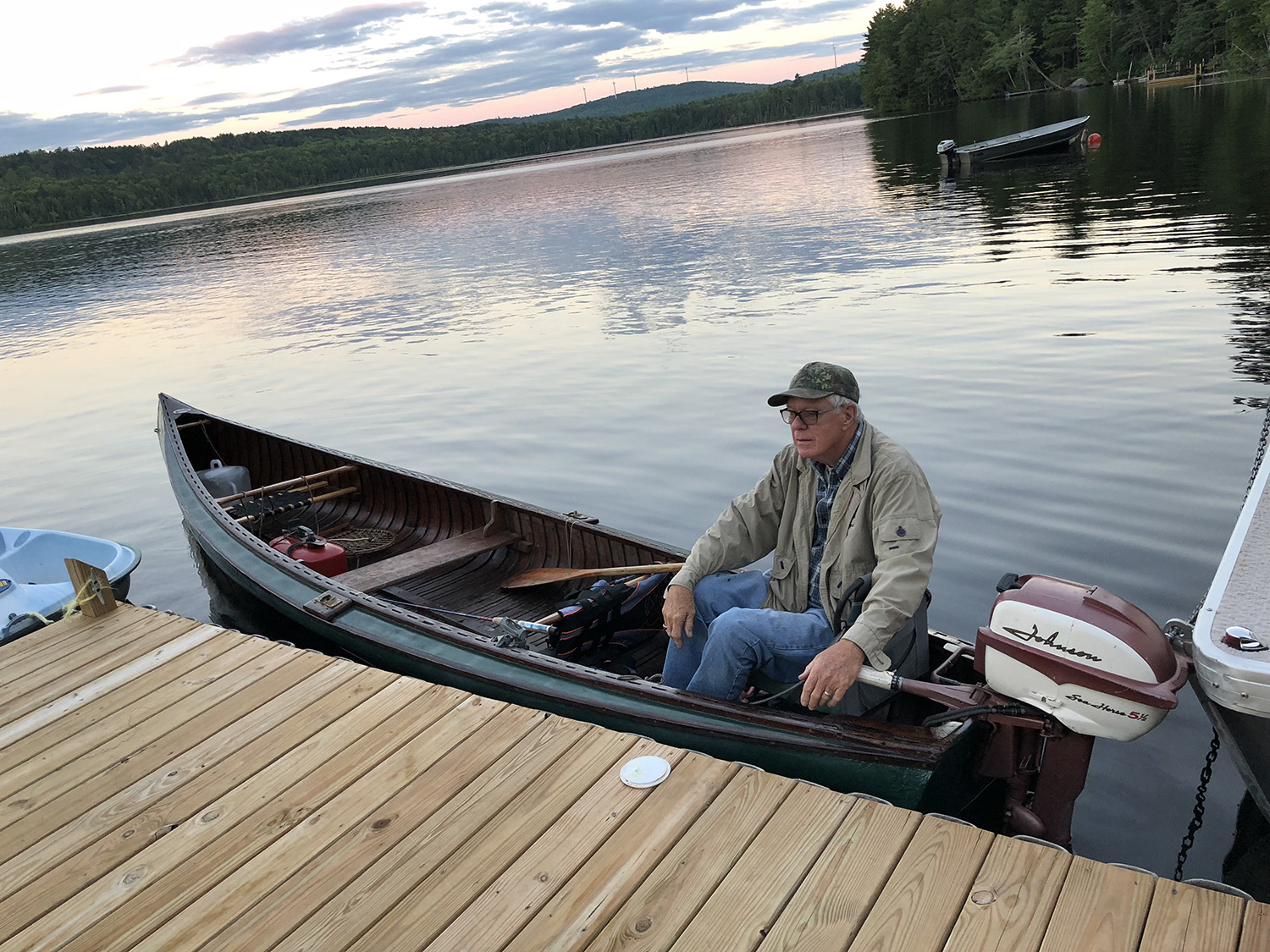 A close neighbor, Dick comes and goes with the tides of time, taking the Morse kids to the doctor or out for a swim

Everyone swam, caught frogs, admired Dick’s 1940’s Old Town canvas over wood canoe, made ten last casts and told tales. Dinners simmered over wood fires, bourbon chilled in blue metal cups and lights began to change.
Each day was familiar for our surroundings and new for its adventures.  Sitting with good people we would miss until our return, we wouldn’t have traded that time for anything in the whole world.

Sunday brings us the winter solstice, significant in that it brings the years shortest day and conversely, its longest night. After this sunrise, our amount of day light slowly increases and we get to start back into gearing up for spring fishing. Since pulling...
Keep Reading