And so it begins…Spring’s greatest day

Spring’s greatest day, the opening of trout season in Rhode Island was a soggy success. Steady rains came early and often, winds pushed everyone around and skies were zebra striped with sheets of clouds racing south to north. Two days later, under far more obliging skies, a newly organized group of saltwater fishing guides hosted the Fly Fishing Film Tour to remind us all how amazing fly fishing can be, how fragile our resources are and how fun it is to cheer for a movie.

Opening day is important for so many old school reasons, not the least of which is a big breakfast smothered in bacon.
Mmmmmmm, bacon.
People were camped out by midday Friday because it’s pure fun. It’s fun to break out gear stowed since last fall, to discover you never refilled the Coleman fuel bottle, that there’s no batteries in the radio for a Red Sox game, to remember you left your bag of tent pegs at that sweet campsite along the Farmington River last year and that there’s no better place to spend a windy, rainy, chilly night than with a parking lot full of anxious fishermen suffering from the same no-fish-in-a-month affliction.
The weather didn’t cooperate. It rained through the night, through the morning, through my waterproof pants, which left a particular patch of water in a central location therefore prohibiting me from walking into The River’s Edge for breakfast and bacon. There was a lull just at the official 6:00 a.m. start but it didn’t last much longer than it took for me to lose two fish at the gunwales of our Old Town Penobscot canoe.  Two young girls chatted through their five minute paddle from the Barber Pond ramp to their spot next to our Old Town. They kept on chatting while others tried to focus on catching because that’s exactly the problem with young kids today, they can’t focus. They caught three trout in the time it took to write that sentence. In the words of songwriter Robert Weir, “Fish were rising up like birds.” We moved over a few yards closer to them.

Ponds statewide were stocked with trout weighing an average of one and half pounds. Stocking remains controversial. Some feel it’s short-sighted, that funds generated from license sales would be better spent developing resource enhancement plans and in the preservation of critical trout habitat, especially in areas which hold populations of brookies, our only native species. Everyone would benefit from an abundance of wild fish as opposed to the limited cash box cheer of a put and take fishery. For now, front pages are for pictures of young kids with great big fish and the most genuine smiles, second pages are for pieces about a new stream where someone wise with their cap on backwards spotted a two inch young of the year brookie. 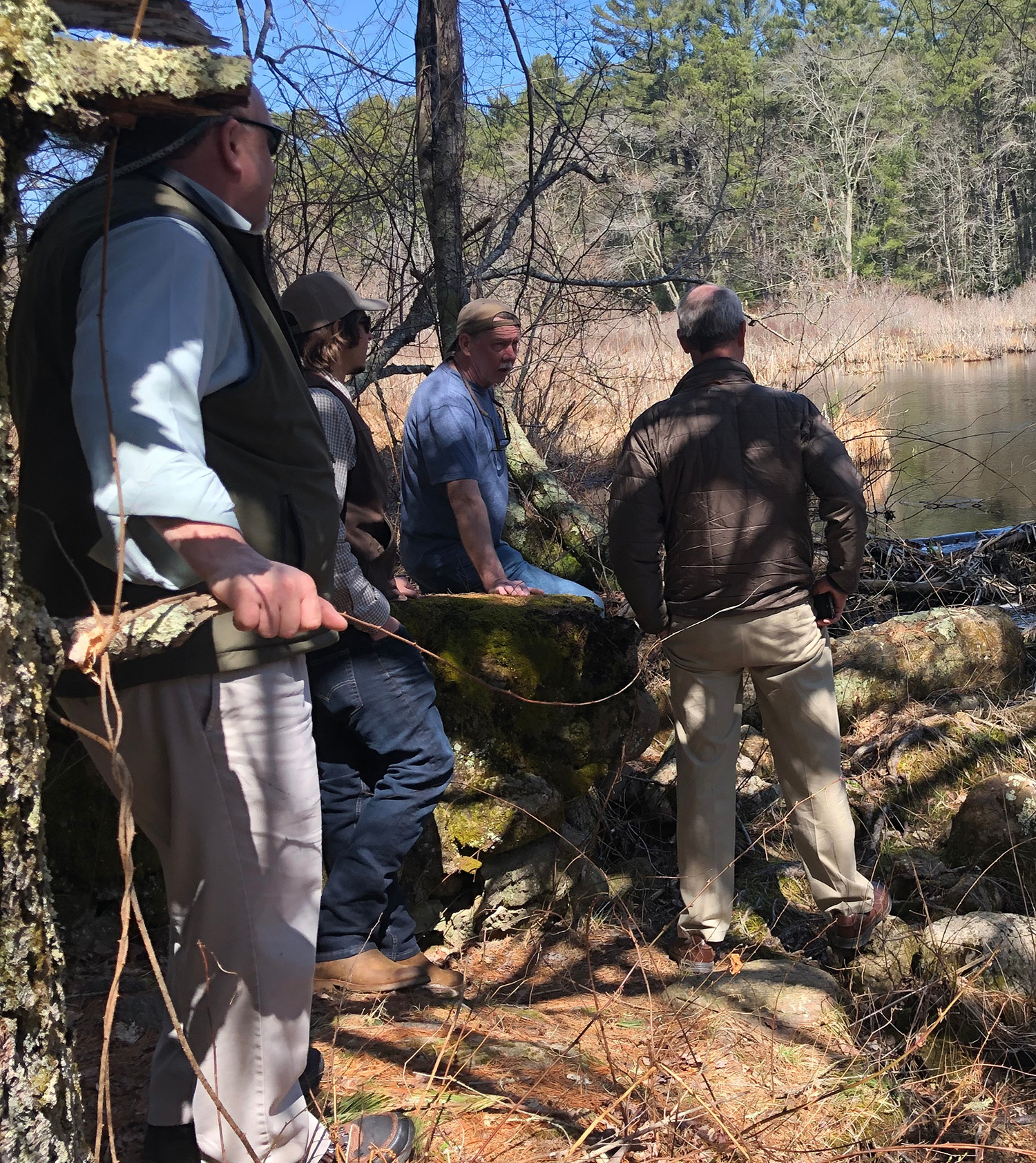 Every pendulum eventually swings back. 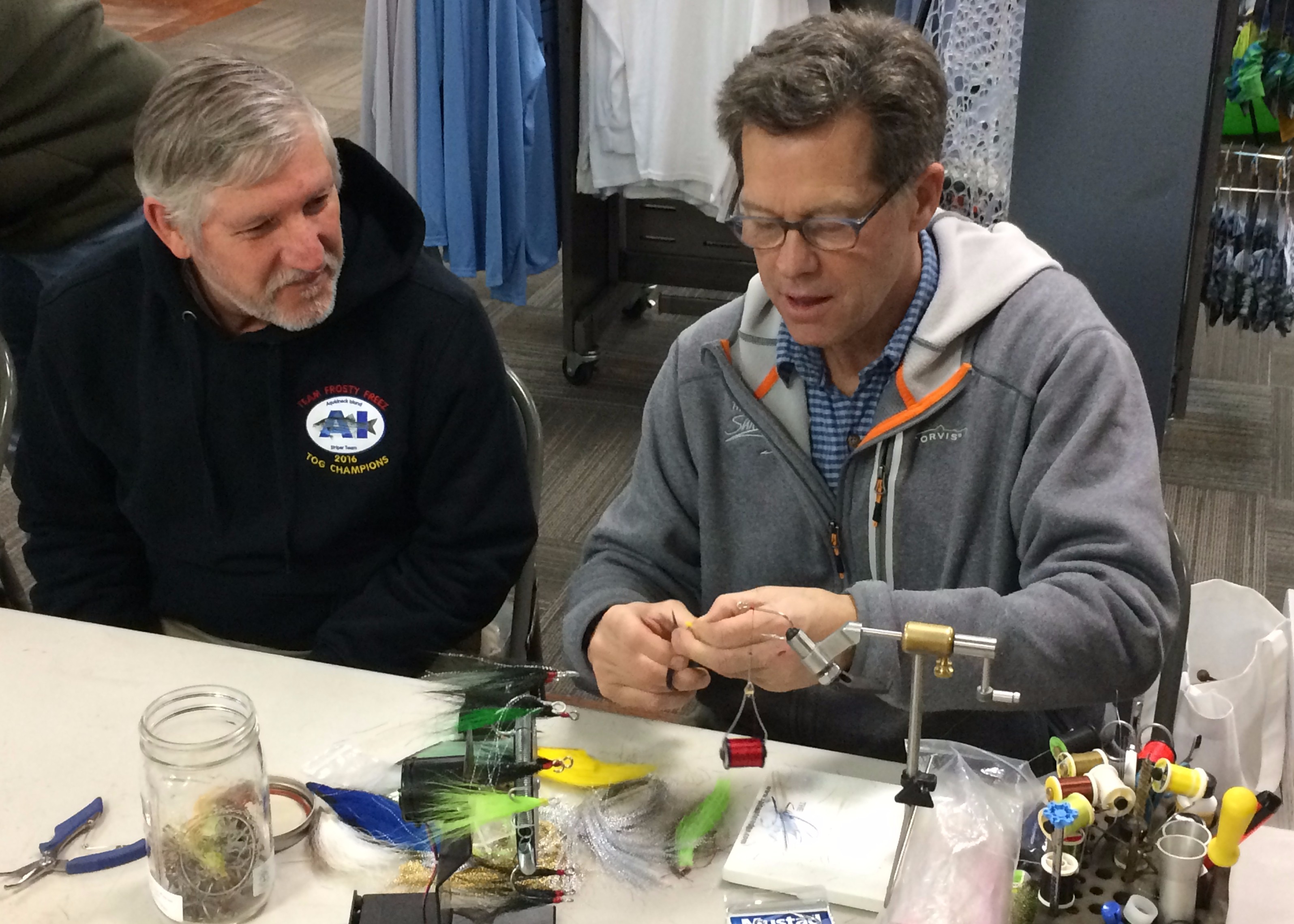 Peter Jenkins, teacher at his desk

Peter Jenkins, owner of The Saltwater Edge in Middletown, MC’d the fishing movie at The Jake in Providence. As Board Chair for the newly created American Saltwater Guides Association, he happily spoke about their mission to protect bluefish, stripers and Atlantic menhaden, create awareness of the Magnuson–Stevens Fishery Conservation and Management Act and promote guides and downstream businesses who rely on catching and releasing fish. 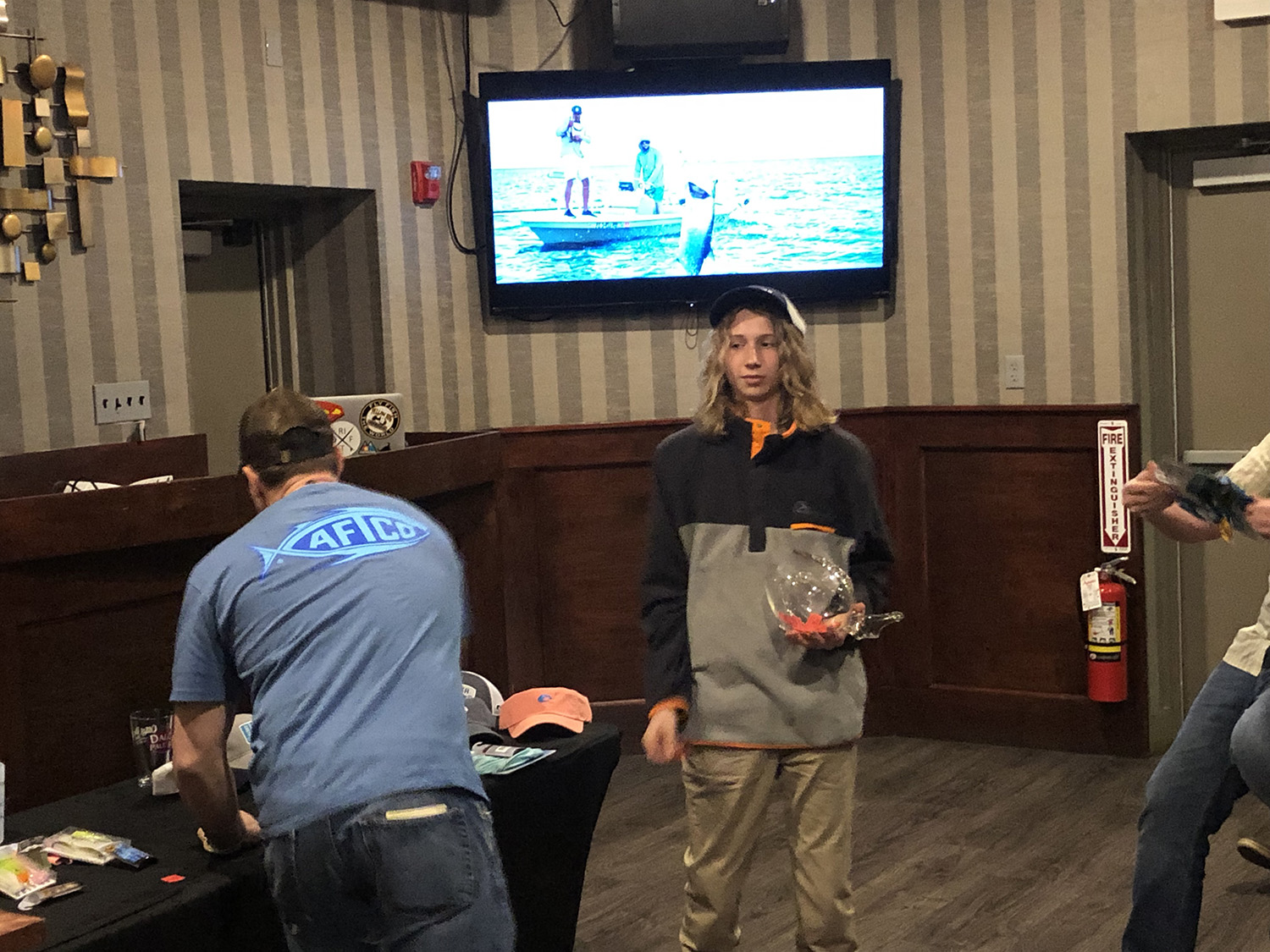 The movie is a riveting series of short films about characters who chase fish. There’s a brilliant piece centering on (not centering around, come on NPR) a ten year old boy who ties flies, catches trout and narrates better than most adults can speak. There’s a long stretch with some very pretty overhead shots of fish landed in shallow green water but the dialogue is largely incomprehensible due to thick Australian accents and logo hats pulled down low enough to prevent any opportunity to read lips. The opening piece made your innards tighten as a snowboarder flies off a mountain edge only to reappear moments later on an explosion of new powder only to reappear later on the edge of a steel head stream engulfed in whiskers of epic proportion only to reappear later launching a snow machine off a similarly sharp mountain edge to the demise of the machine but not the whiskers. 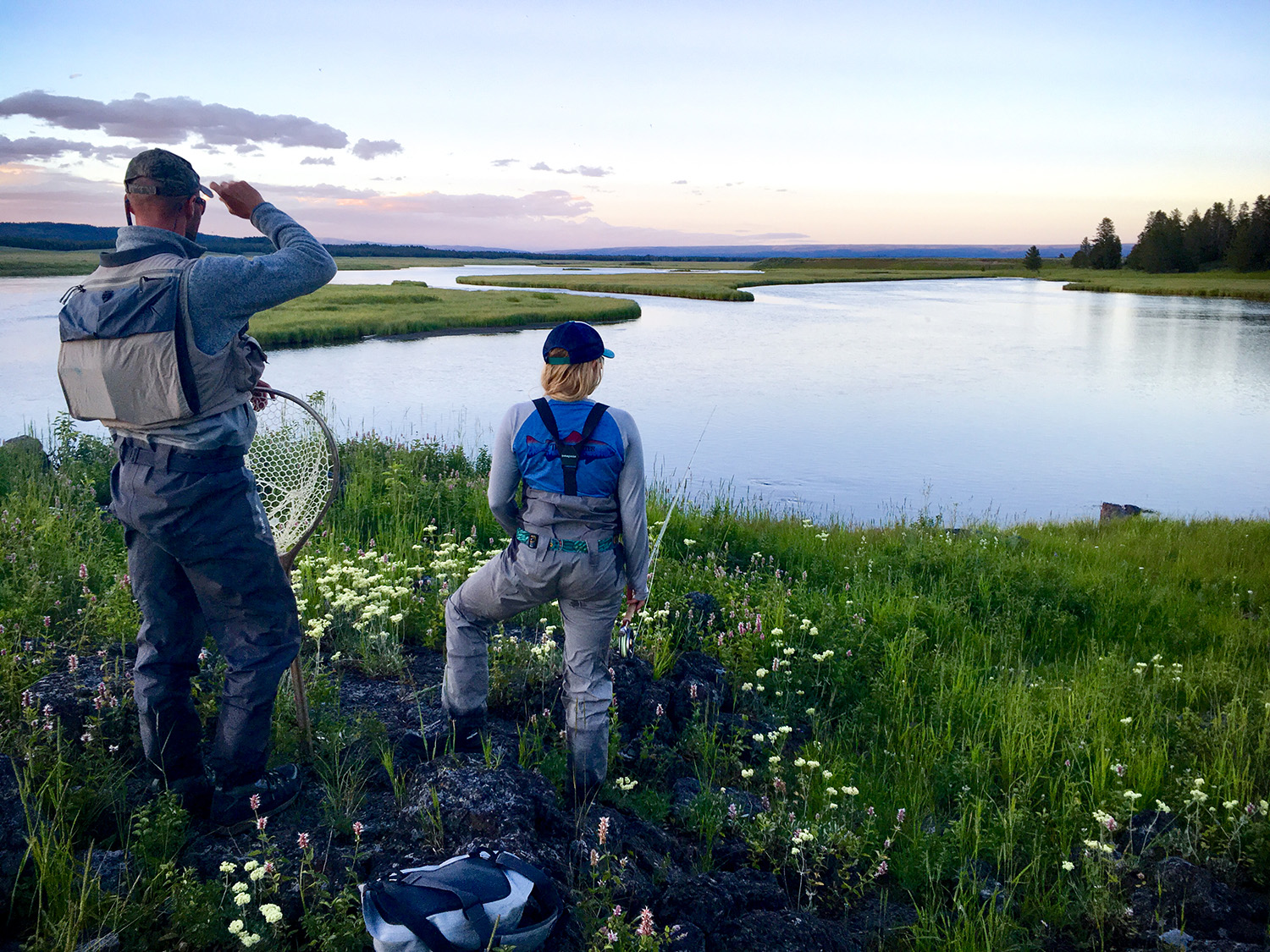 The ASGA knows lawmakers can lose focus when short-sighted lobbyists push hard for short-term financial rewards. They’re ratcheting up the volume that fish stocks deserve protection, that abundance isn’t measured on spreadsheets of fish in a net or lumped up on a dock. Since there’s no “put” in ocean fisheries, just “take” for some populations, they have to be bigger than sales-driven big box stores, louder than lobbyists.
The Fly Fishing Film Tour will be only reruns if we don’t keep fish in the water.
Ten years from now the American Saltwater Guides Association will be a force, educating Washington about abundance, sport, forage fishes, how they want people to buy a cooler but not necessarily pack it with fish every time they leave the dock, vast downstream economies and the absolute magic of recreational fishing as a lifestyle and a business.
Swinging that Washington pendulum back in the fishes’ favor will take coordinated efforts; convincing city-slicker lawmakers about the booming economies dependent on live fish will take time and effort because in the words of beat poet Robert Hunter, “You ain’t gonna learn what you don’t want to know.”

The American Saltwater Guides Association took the regulatory tiger by the tail to protect striped bass. According to Peter Jenkins, they’re just getting started because they know, fish are worth more in the water than in a cooler.

Captain Jerry Sparks Guides Us Through the Cinder Worms

It’s one of the most exciting, challenging, rewarding and frustrating fishing events of our striper season: the cinder worm hatch. Salt ponds with dark mud bottoms and skinny water corners where strong tides drain edges will warm with longer days and if all...
Keep Reading