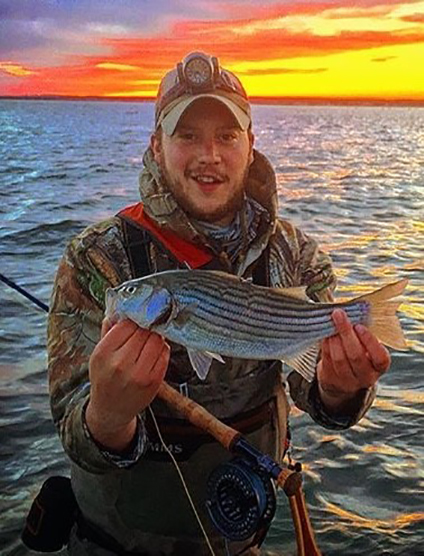 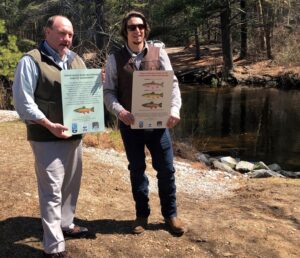 There is convincing evidence that Rhode Island Trout Unlimited President, Glenn Place, doesn’t sleep. He tirelessly manages his Tom’s Markets, generously shares recipes and dishes, prioritizes family time always, enjoys a modest amount of time in waders and all the while, presides over a busy chapter of dedicated conservation minded anglers. Now Glenn has presented a significant, welcomed rule change to the RI legislature, hoping to preserve and protect brook trout in the Beaver River. 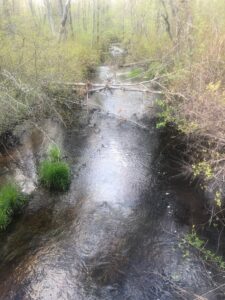 The Beaver River winds through quiet Gypsy Moth devoured woods and under busy roads from James Pond before quietly splashing over Shannock Falls, oxygenating the Pawcatuck River. Four years ago, Glenn met graduate student Jon Vander Werff who was working on a Watershed Management degree with a Graduate Certificate in Geographic Information Systems and Remote Sensing from URI. It would be Jon’s thorough and impassioned research which would fuel a change to Chapter 60 of RIDEM’s Fish and Wildlife regulations with a mission of protecting Beaver River brookies.

“Beaver River, Richmond, catch and release only and [removed from the  designated trout stocked areas (§ 10.6.1(A)(17))] the portion from the confluence of the Beaver River and the Pawcatuck River, located downstream of Shannock Hill Road, Richmond, upstream to the New  London Turnpike, Richmond, shall be designated as a “no kill”, “catch and release” area. Fishing shall be permitted with artificial lures equipped with  a single barbless hook or single barbed hook that has been crimped, and all fish caught shall be returned to the water immediately. The possession  of any trout, salmon, or charr while fishing in this section of the river shall be prima facie evidence that said trout, salmon, or charr was taken in violation of these Rules and Regulations.”

“I did as much as I could do in a day. Depending on river conditions and access, usually anywhere from a quarter mile, well, one day I did three quarters of a mile,” Jon said of his snorkeling five river miles in 2017 to support his thesis. “Because I was seeing impressive fish,” he swam a few sections multiple times. The rule change reflect his snorkel survey, an accepted means of environmental evaluation by the American Fisheries Society and extensive review of the watershed with deep consideration of brook trout populations in their critical habitat.

A team of conservationists

Vander Werff also surveyed with rod and reel. “I went out multiple times with a series of flies, five in all, for standard survey acceptable results,” he said. He was successful finding fish with nymphs, “sometimes” he said with a chuckle.  Among other local species, he saw eels, suckers, red fin pickerel and where fish are stocked, rainbow trout. Much like Glenn, Jon seems to research, work and play tirelessly. Joining passions created a positive force to identify, catalog, protect and preserve fresh water fishes.

“I found an incredible population of brook trout. A very large and I would say robust population,” Vander Werff said. If you’re concerned about fishing being impacted by this proposal, that’s not the intent whatsoever. This is a forward-looking, clearly considered strategy to protect a population while reducing our dependence on hatchery trout, two of which are invasive species. It also illuminates pure magical potential of healthy streams supporting wild, native fish.

He also found, “Pristine pools, where you thought you were in gin clear water out west.” Vander Werff developed professional and recreational perspective working as a fly fishing guide at Wyoming’s magnificent Brooks Lake Lodge & Spa, guiding and fishing all over the world. It was the west’s deep canyons and wild native trout where he, “was touched by the scenery of Yellowstone.” In Richmond, he found catchable sized fish, over six inches, tallied numbers and dropped pins to secure GPS locations. By design, he avoided snorkeling during spawning season although he did maintain a series of data loggers to monitor parameters including water temperatures. Readers are well aware of how dams often raise water temperatures to the detriment of trout. Remarkably, he saw potential for sea run brookies, although we was not able to document their presence.

The entire five mile upstream swim, from April to November of 2017, required approximately 270 days to complete. Since graduating in 2018, Vander Werff works with Save the Sound’s Ecological Restoration Team, helping engineers and lawyers plan dam removal while protecting our shared natural environments. 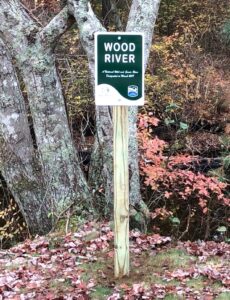 “No, I did not think this was going to happen,” he said, referring to how his work resulted in such a significant proposal. His timing is fantastic as the state was considering a brook trout sanctuary somewhere other than The Wood River, which quite simply produces too much cash in license sales.

“I wouldn’t have been able to do it without him,” Vander Werff said of his research and Trout Unlimited’s Glenn Place, adding, “I’m honored to know how highly Glenn is speaking of me.”

One passionate conservationist saving his money to fish anywhere he hasn’t been yet is honored to have some well-earned appreciation from another passionate conservationist who manages business, family and volunteerism without a touch of sweat on his brow to preserve cold water fishes and support following generations of conservationists. If you have a passion for fish and fishing or just walking alongside moving waters, these two gentlemen deserve your thanks.

“Brook trout are an American Icon,” Jon Vander Werff said. “A hundred years from now, someone will be able to catch a brook trout. That’s what fuels me every day.” Thank you Jon and Glenn. Your whirlwind conservation forces are precisely what anglers and brook trout need most right now.

Before getting back to work, Jon said, “Glenn is an instrumental savior of the brook trout in Rhode Island.” 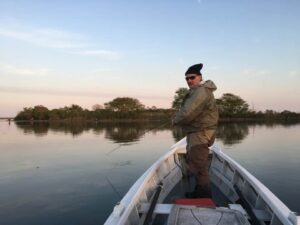 See that? There’s always hope in our Ocean State.

On February 21, my good friend Peter Jenkins at The Saltwater Edge hosted another excellent Surf Night. Peter brought in Dave Anderson and Gerry Audet to walk us through finding fish on a make-believe spot they’re calling Mystery Island. The deal was, based on all...
Keep Reading