For those of you scoring at home, here’s that update on the Stars and Stripers and Project Healing Water Fly Fishing event on Narragansett Bay and a quick note about a group of friends looking for fish all night long. 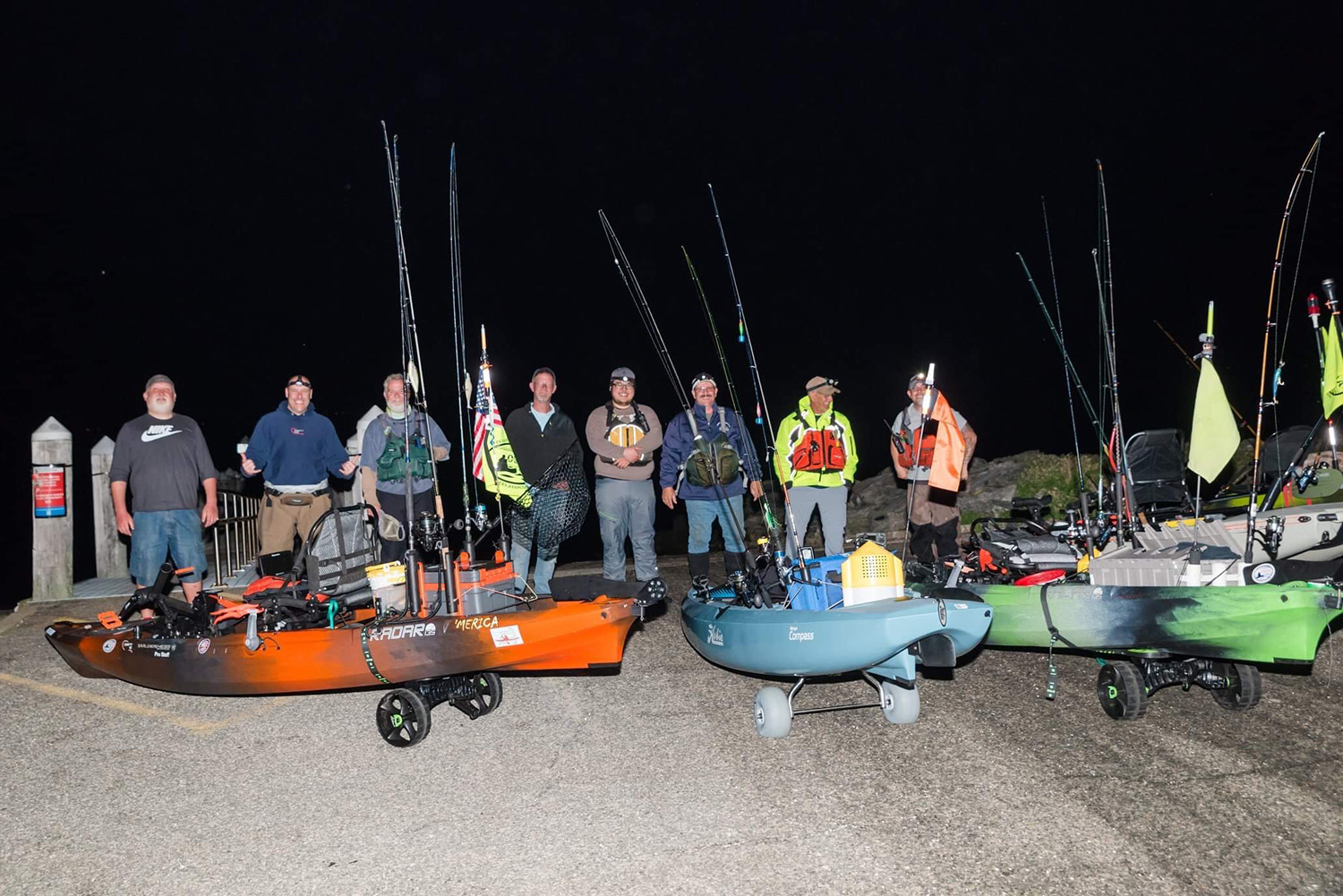 Ready to launch and fish all night

It had been a tough few weeks on the Bay. Fish were around, then they were around wherever they weren’t last week then the reports were a mess. A few people caught a few big girls but then, well, the waters changed. Tom Adams of the Ocean State Kayak Anglers Association led the charge for a few late night stripers while a crew of veterans took up their fly rods and charged the beaches for some therapy.

Tom could not have ordered a better night. He had heard talk of big bass, thirty and forty pounders, even the occasional fifty. Leaders were upgraded, hooks sharpened, much to the chagrin of PETA. With calm winds and fair skies, friends old and new launched from Colt State Park at midnight. Seriously, midnight. They pedaled and paddled their way north then west, loaded with eels, swim baits, Al’s Goldfish, Slug-O’s and boxes tight with every possible option.

Brian Hall was there, with his Taylor Swift tunes as lures and no sign of any Chef Boyardee cans, Elon Hertzfeld had been out early fishing Cape Cod so he opted for a nap before joining the flotilla at three a.m. That’s dedication. Jesse Huynh, Norm Czech and Joe Federici worked up the shoreline and into the teeth of The Warren River.  With no breeze to speak of to keep a fog bank from settling in, it did. It’s tricky enough when fog appears; it’s another story when you’re inches off the water with just a flag and light to warn approaching boaters of your location and precariousness. It can be disastrous when boats go steaming full on down channels with no navigation lights, as several were that night and early morning. 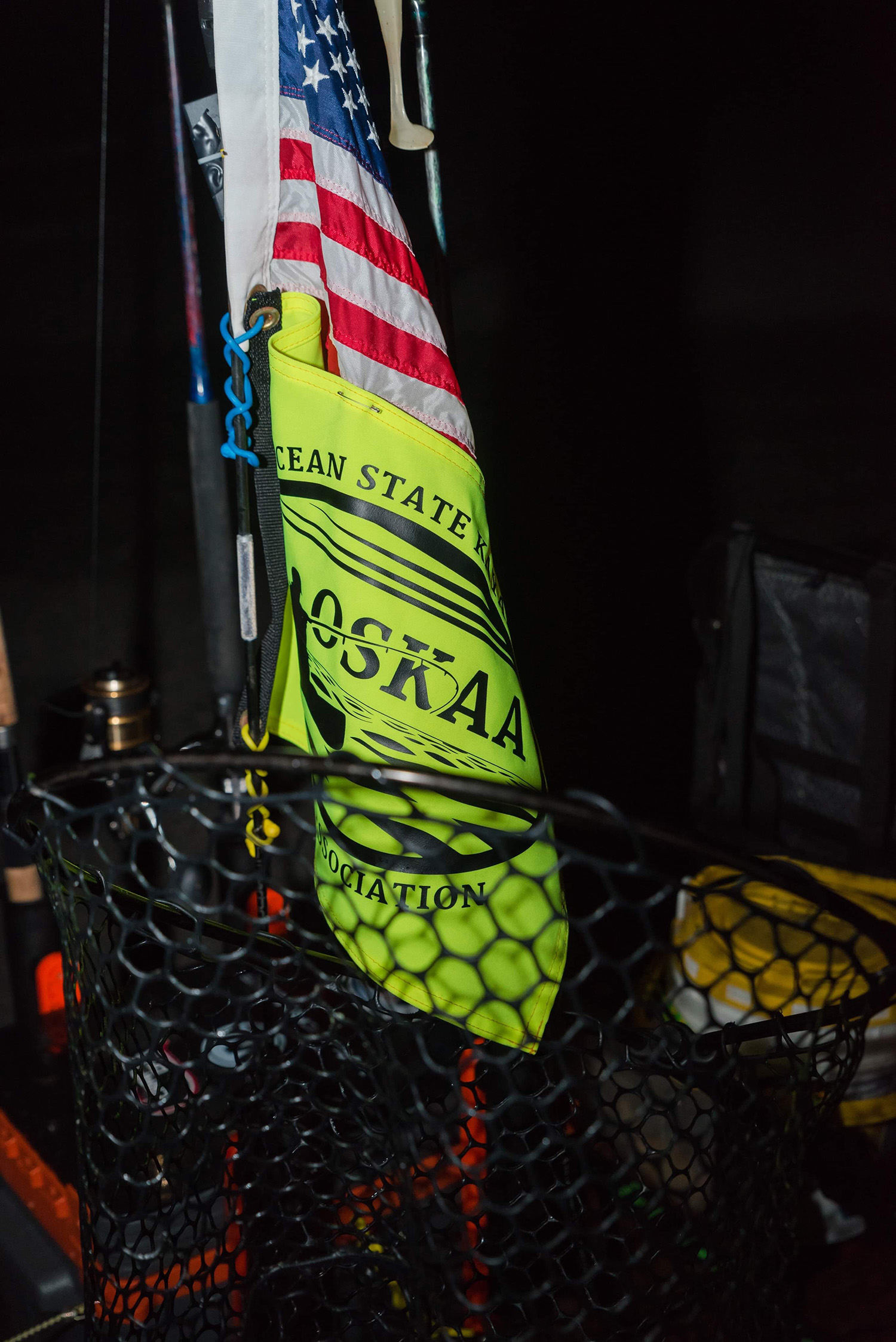 Wave those flags, wave them wide and high

They fished around Hazard Rock, an ironic landmark on which to base their positions, partly because it’s a rock, which makes it difficult to discern which side might be west or north. Its name isn’t terribly comforting either. At daylight, they fished Barrington Beach, where some miscommunication resulted in an old school snipe hunt for stripers. “I’m on the beach, and there’s a ton of fish,” does not necessarily define which beach, which in this case, was not the right beach. But it was a lovely tour of some fish-less waters.

A few fish were caught and released, a few were a few inches shy of legal size. Certainly there were not the numbers of big bass for which they had hoped but they had an old school blast, making their way around a silent Narragansett Bay and returning safely. If nothing else, we fishermen always have hope. 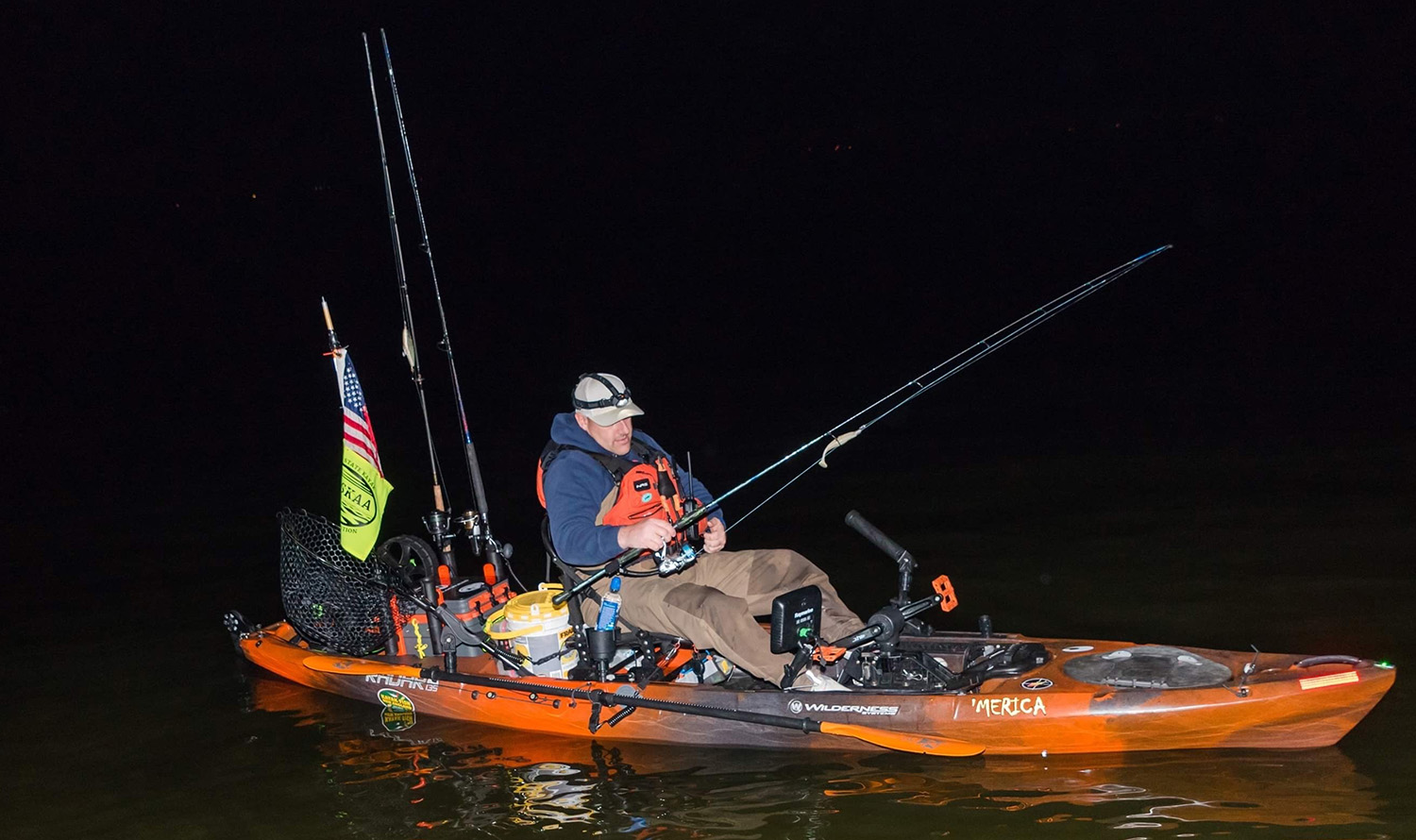 Tom Adams up all night, looking for fish

The Project Healing Waters Fly Fishing and Stars and Stripers worked together to take some veterans fishing in The Bay. It’s now an annual deal, where volunteers take vets who needs some outdoor therapy for a day on the water.  After a grab and go breakfast, more than two dozen vets started off from Alan Harbor in North Kingstown to fish the upper bay. First, there was a moment for the National Anthem. Hats off, hands over hearts, eyes on the flag that bound them. 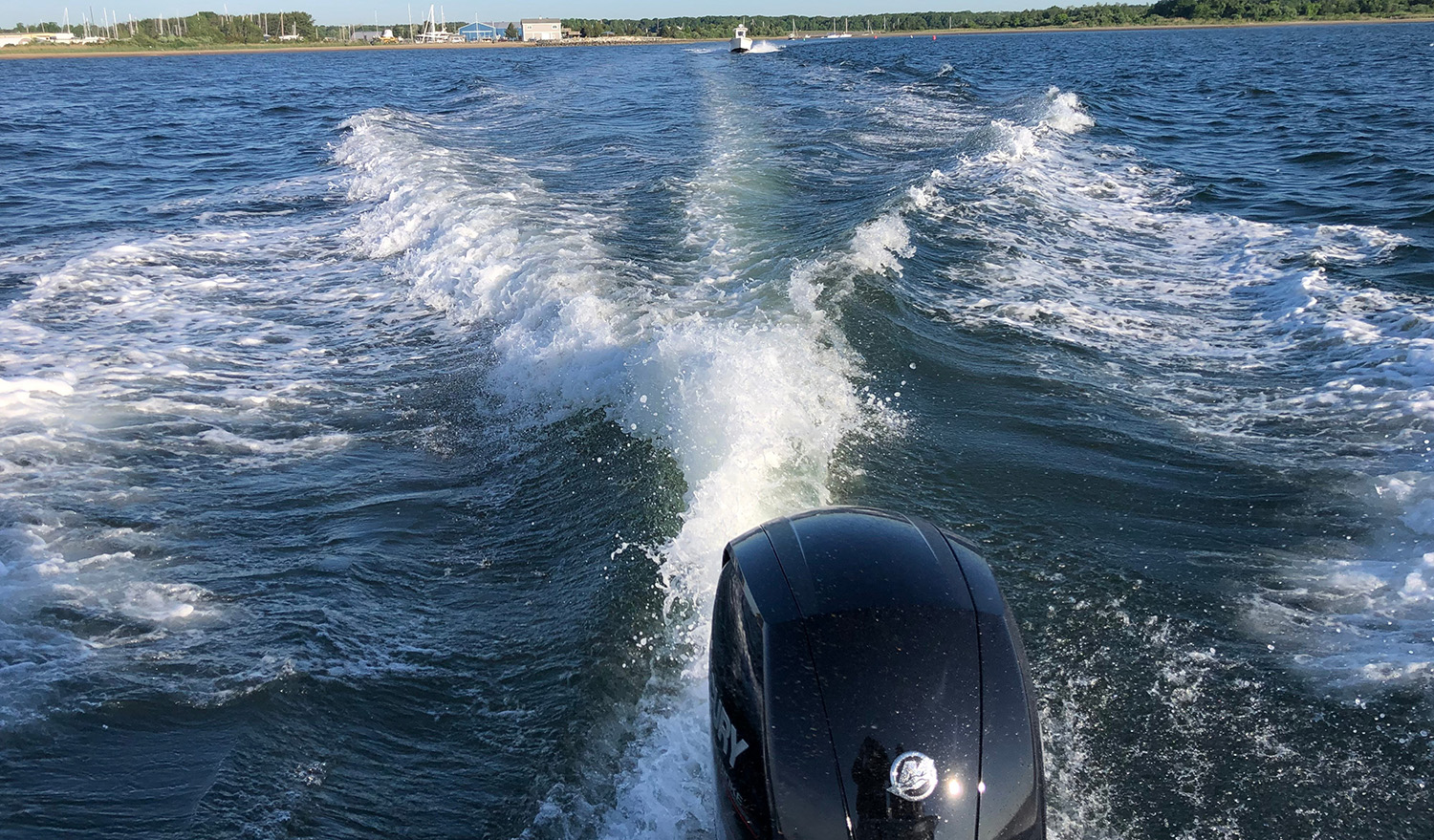 “Hopefully we’ll make something happen,” said Captain Rene Letourneau of On The Rocks Charters. He was lucky to have Dan Ward on board, a Marine who spent two tours protecting the rest of us and he appreciates his time on the water and in the woods. Project Healing Waters is dedicated to giving vets what they need because many have exhausted themselves giving everything for us. 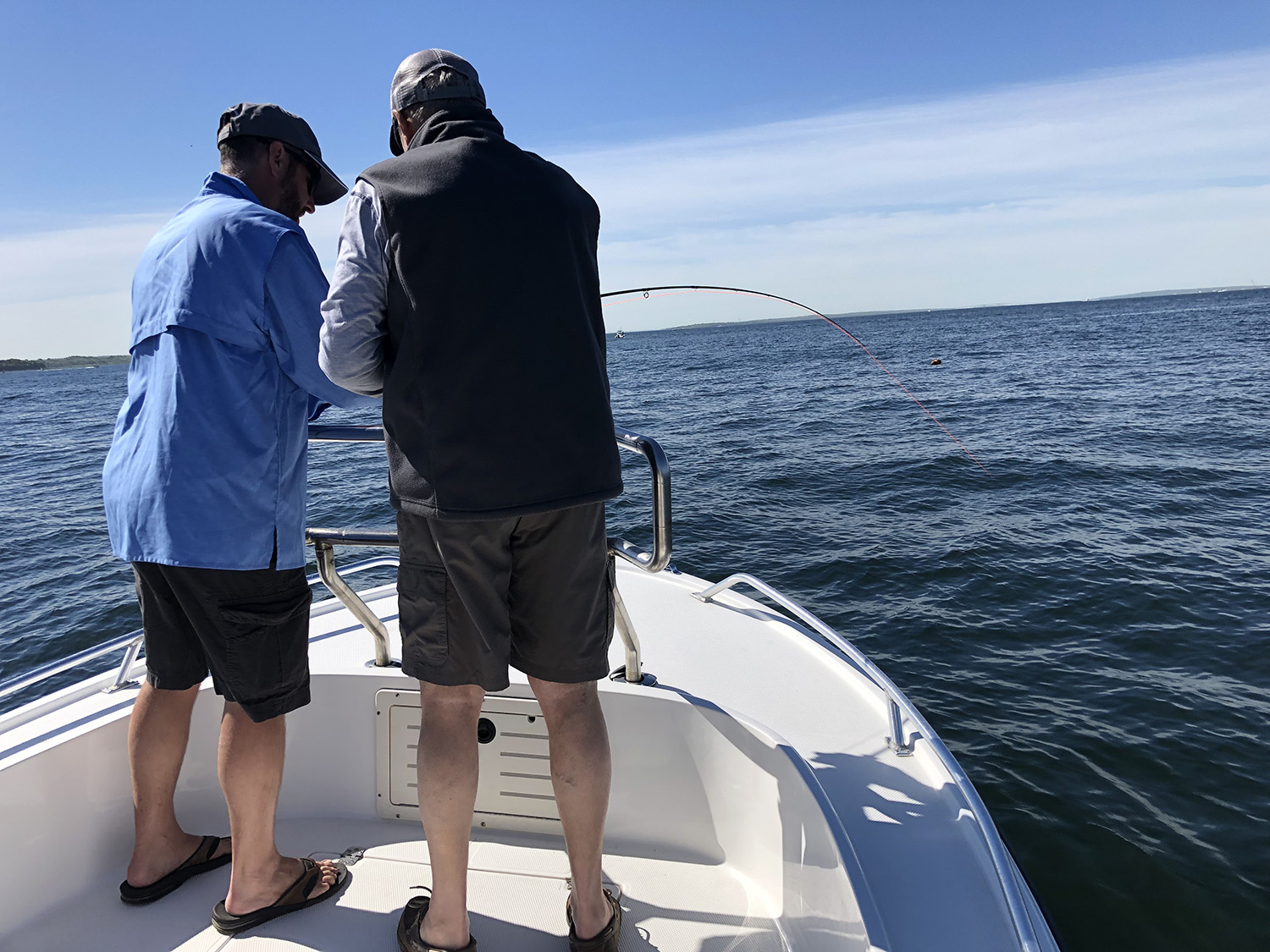 Ever the patient teacher, Capt. Rene helps Dan Ward bring in fish on the fly

Capt. Dave Monti had the blues off Buttonwoods and put the first fish over the rails. Richard Lipsitz steamed to Mount Hope Bay but found no one home. Capt. Rene searched off Patience and Prudence then between a rock and a dock space to find a few schoolies. Fishing was tough. Dan was a perfect student, admitting he understood just the basics of casting a fly rod but hadn’t had much time with an eight weight. He was an ace. Rene, an Orvis guide and two time runner up for Saltwater Guide of the Year, took time to ensure Dan’s arms were right and his cast was straight.

Dan’s first fish came at 9:31 am and, as is often the case, was a surprise. It’s always after fifty clear casts that you look away for some inane reason just as the first fish strikes. Dan was solid, held tight, rod tip down, taking in line quickly, reeling when he could, following the fish around the bow. The bass turned out to be a blue and when it turned its head, the leader parted.

Cast by cast, Dan improved through the day and even with just one fish to show that never really showed, he never stopped smiling. 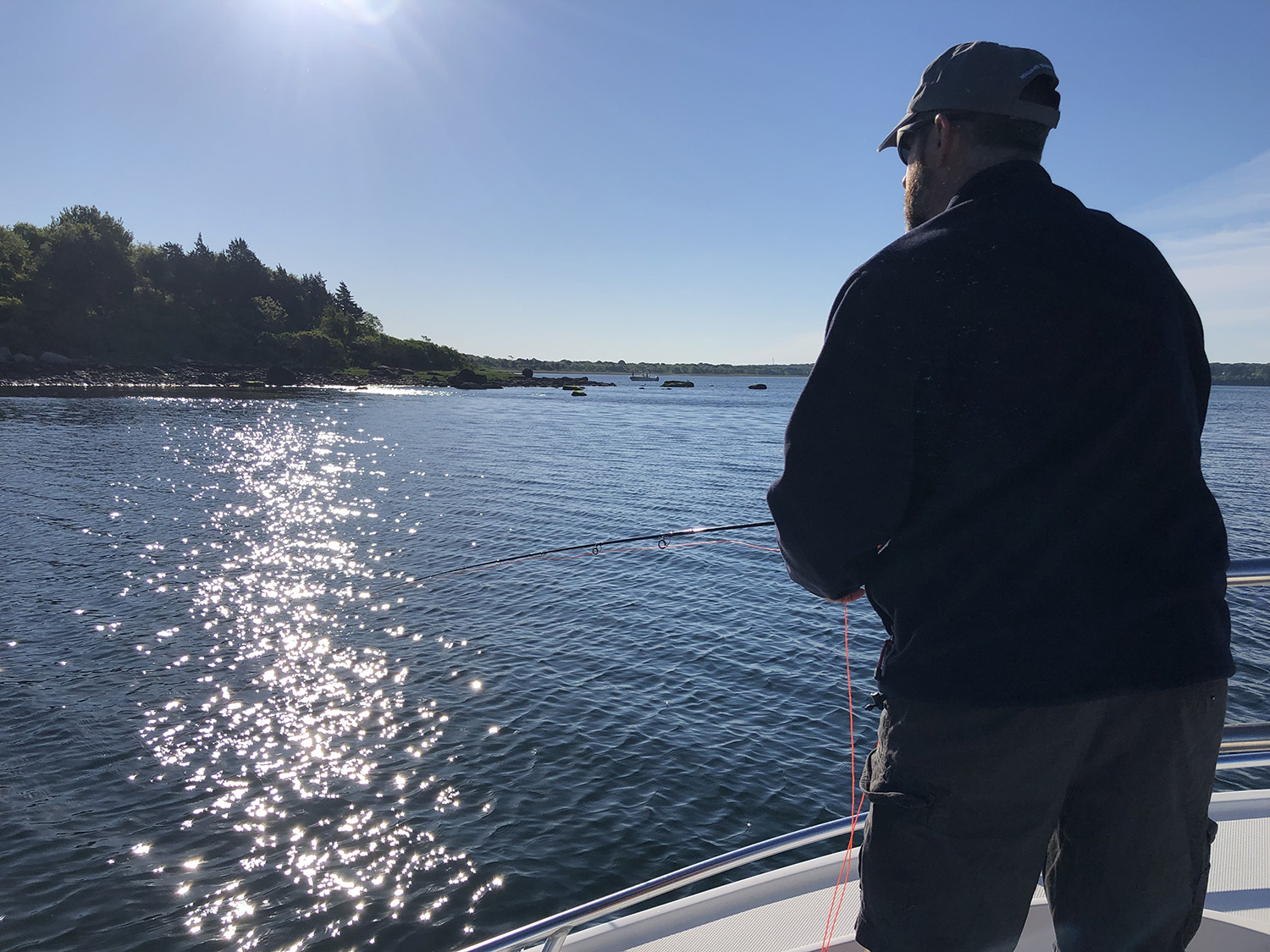 Vet Dan Ward took to the fly rod with ease

In the shadow of rusty Quonset huts, Rob Gemma once again donated his time and skills to cook burgers and clams for veterans hungry from a day on the water. Time on the water is always time well spent. Keith Tanner thanked everyone for donating their time, boats, fuel and hearts. Project Healing Waters and Stars and Stripers share a foundation of volunteerism to support our troops. There weren’t great numbers of fish like they hoped for but it was worth every minute. It’s always worth volunteering for veterans because these men and women sacrificed for every minute of our collective freedom and some are still paying for it. 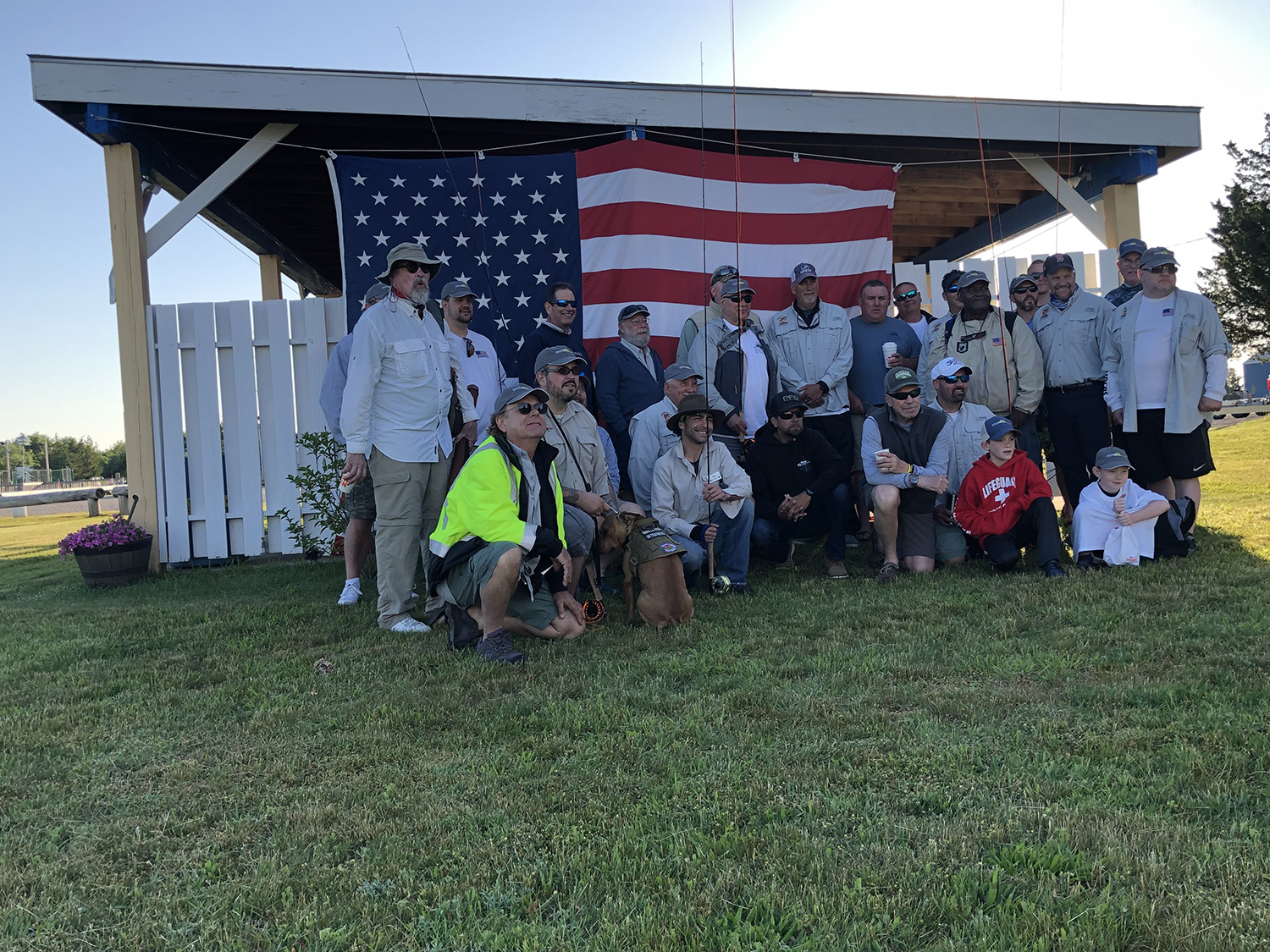