Seems the HOV lane is open to the Cape Cod Canal.
Last winter, Peter Vican and Don Smith gave a talk to the RI Saltwater Anglers Association about how they used to catch big stripers south of Block Island. They fished a few honey holes, mostly at night and with eels on the bottom. The successful recipe seems to have changed and not for the better. One of the takeaways was that there clearly aren’t a lot of big stripers around these days. 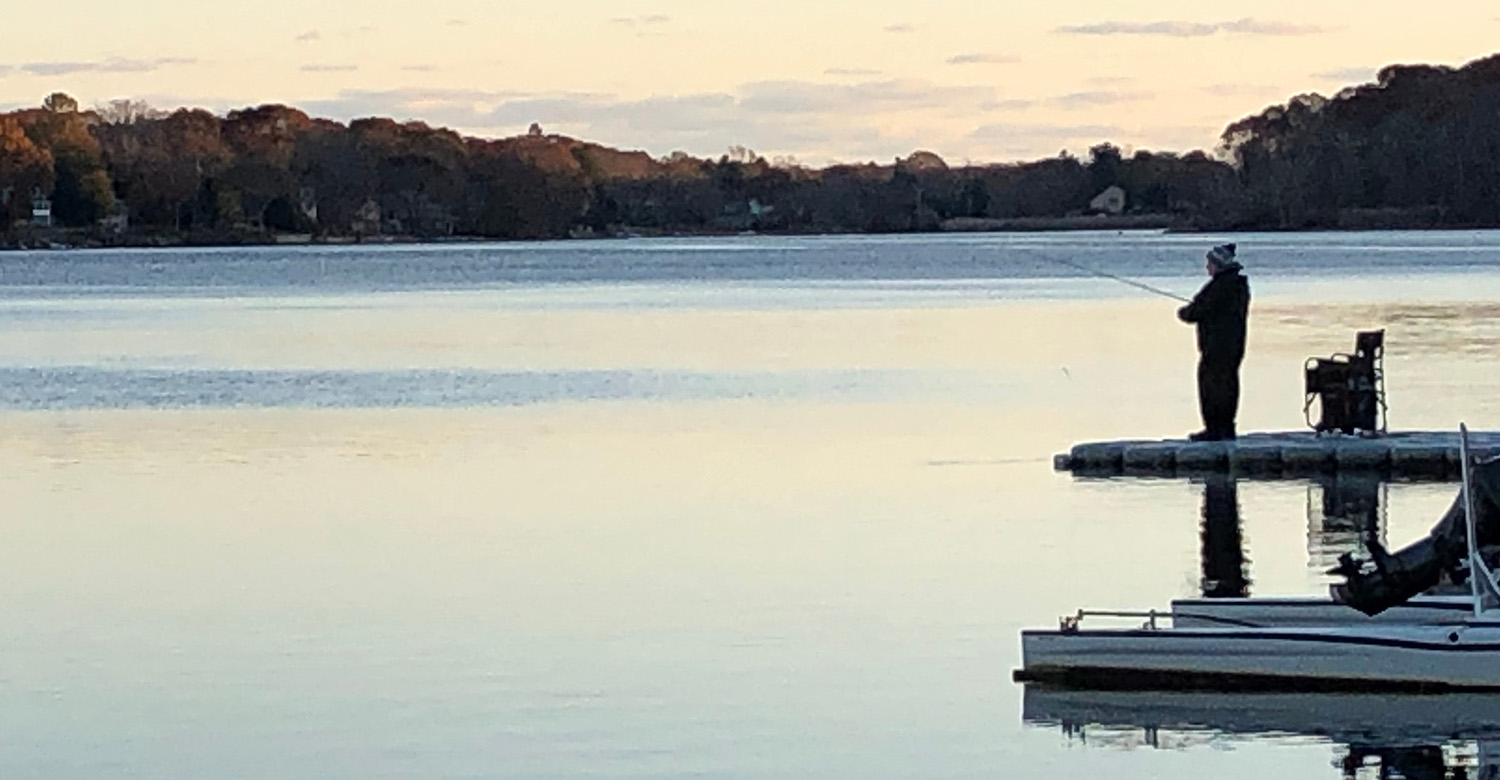 solo casting for bass in a cold river
They brought that roomful back to the glory days of Southwest Point, Black Rock, the Southeast Light and a few secret spots without the benefit of helpful coordinates. Today, they are not seeing the numbers or sizes they used to but interestingly, they are seeing stripers feeding on the surface. No self-respecting wise old bass would be up top when all the good easy bait and plenty of shelter are down low.
So what does that sage observation mean to our striper stocks? It means something is off the rails. They both feel that stripers are largely ignoring the Ocean State and heading east. Are they moving away from big sea bass populations? A month or so ago, we had a decent shot of large bass in the upper Bay, following pogies and squid. Reports now are all about a few here and a few less than that there. Not many fishermen are shouting about trophy fish, or even fish worthy of bragging rights. BJ Silvia has landed a couple real beauties because he’s an ace. For sure, there are still some decent fish in The Bay and around the island. For sure, a few will be caught in odd places, like in wicked skinny water, off Oakland Beach at noontime on a sunny Wednesday or in a slack tide salt pond but mostly, we may be staring a drought in the face.

Trending
Captain Rene Letourneau is the 2020 Orvis Saltwater Guide of the Year, finally 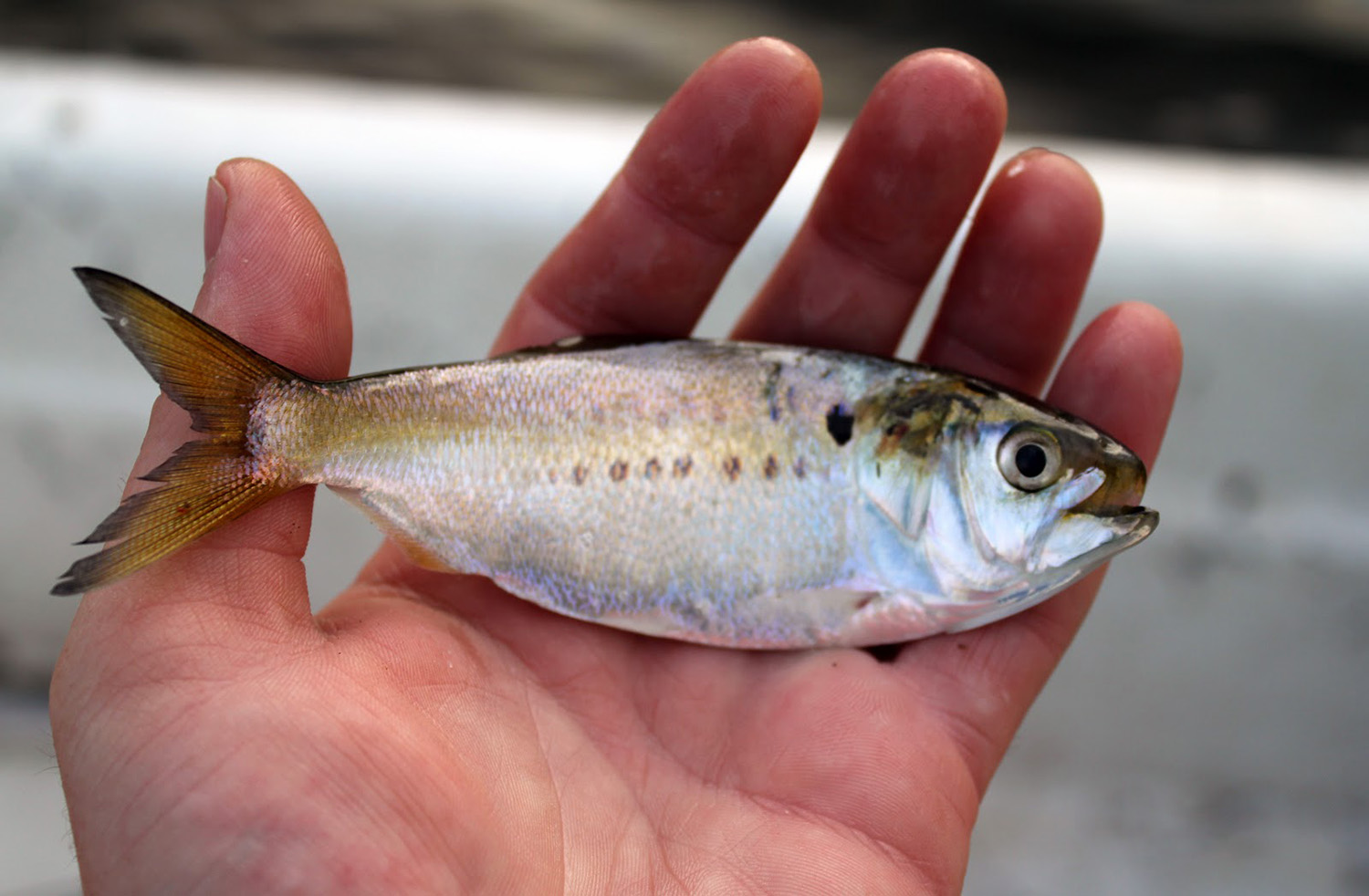 Too many black sea bass? Could be, since they’ve moved in thicker than New Jersey plates on the Block Island ferry and they eat the same foods as bass. One fisherman told me he recently hooked a big sea bass near the Jamestown Bridge and it had two baby lobsters in its gullet. That’s taking food right out a stripers mouth. Looks like many of the big bass are headed for The Cape. So what’s to be done? 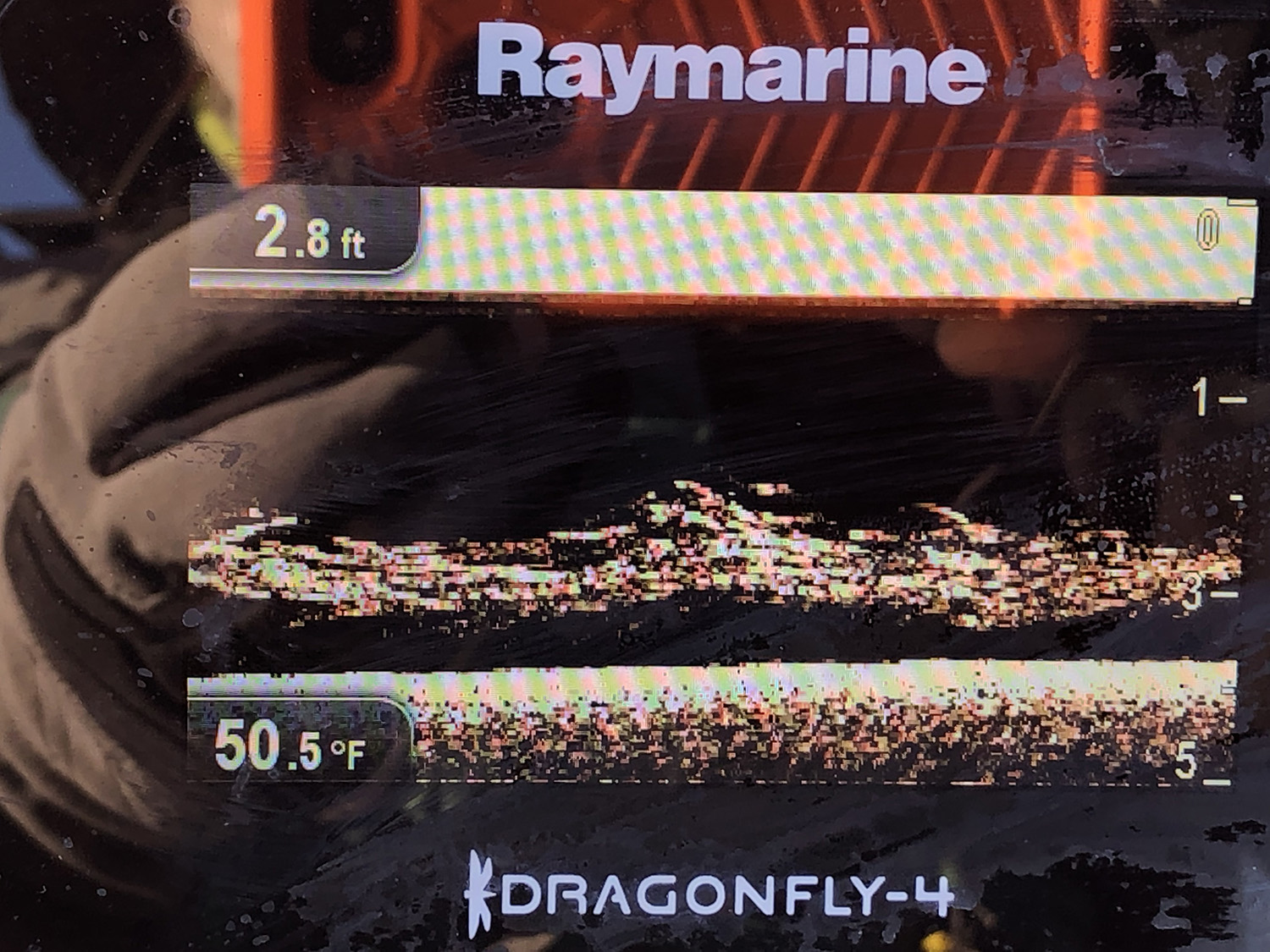 lots of marks but nothing chasing that bait

Sparing you the diatribe, fishing is something we love so we need to share a vision of healthy fisheries and waters. Check out what the American Saltwater Guides Association is doing to advocate for just that. Their story is that fish like bass, blues and fluke are worth more in the water than out of it. Their mission states, in part, “We realize that abundance equals opportunity, and that such opportunity is quite a bit more important to the future of fishing than low size limits and full coolers.”
There’s nothing wrong with taking a fish home for dinner or bragging rights but perhaps it’s time for that conversation, the one about making stripers a sport fish or drastically changing the regs for a while to match what people on the water as calling for. Commercial fishermen have been squeezed over the last many years worse than coal miners but historically, RI doesn’t even catch its quota for stripers. Can they take another hit? Maybe that’s not the right question.

The right one might be to ask if we need a time out, to make stripers a catch and release fishery, at least for a while.

The health of the fishery should always be our top priority, not the amount we can take from it. Clearly that’s an easy observation for a guy at his desk but how many times must we go down this dirt road, where we fight for our own positions and not for the resource and then blame our regulators when they make a decision?

It’s not earth shattering news that striper fishing has been lackluster this and last year. Maybe it’s time to change course. 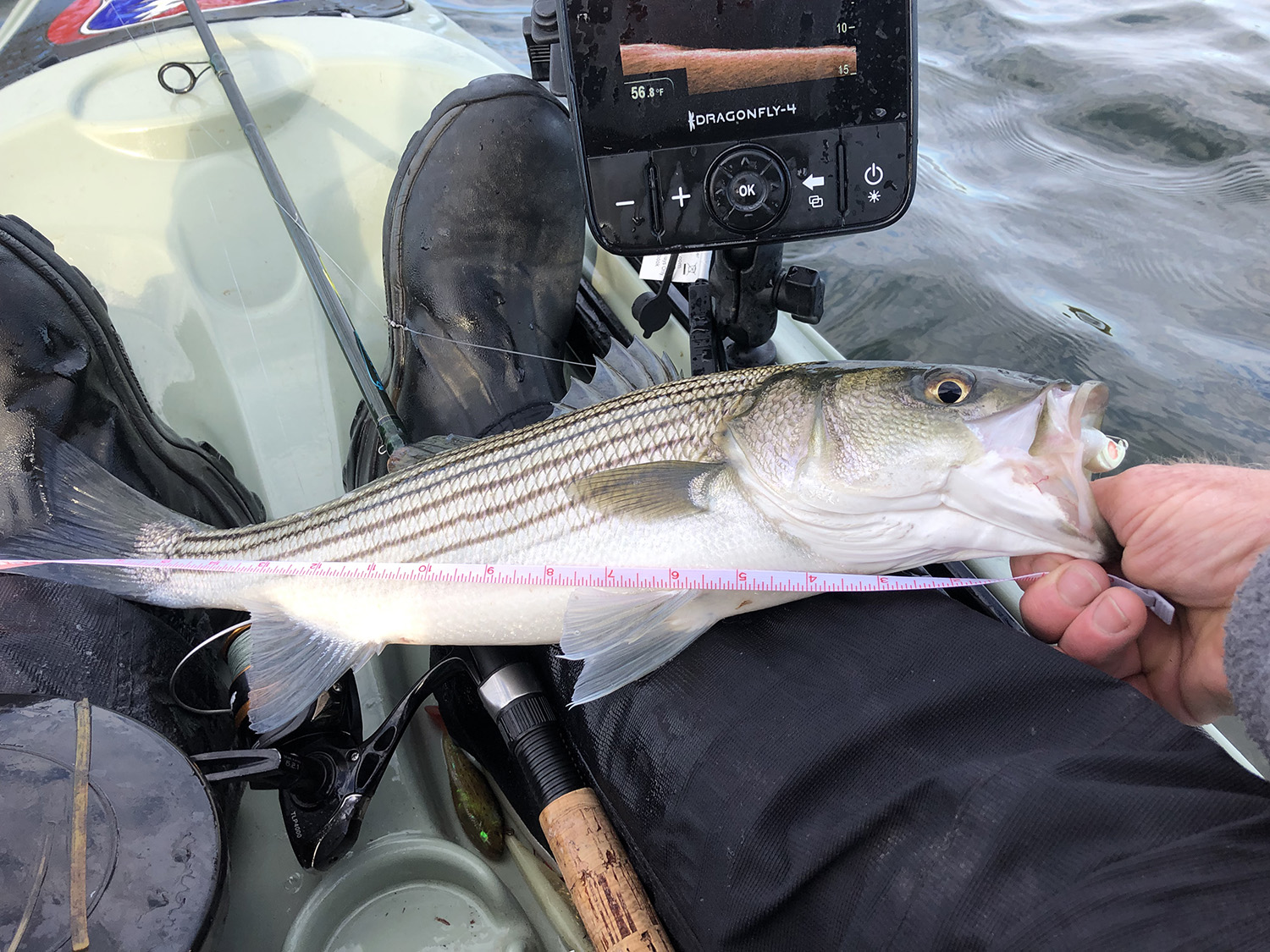 If you need some inspiration to get back on the water, South Kingstown’s Bob Buscher may be just the ticket. Bob is an avid fisherman and conservationist, which is a serious understatement. He’s mostly a freshwater guy so he’s all about catching largemouth bass. This year, Bob challenged himself to catch and release one thousand pounds of them and as of late June, he’s well on his way. By this weekend, he hoped to be at an even 500 pounds and sure than sure, he hit the 506 mark by Sunday.
That’s nothing shy of amazing, considering there’s the family, kids, the day job; all that seems to fall in line with his fishing quest.
He stays focused in a world where people walk into light pole staring at their phones, fall off cliffs taking selfies and cradle their phones in upright palms, just waiting for someone to call. So meanwhile, Bob Buscher is on the bow of his Tracker, happy as a clam at high tide, catching and releasing.
Cheers to Bob and we’ll keep the tally running here. 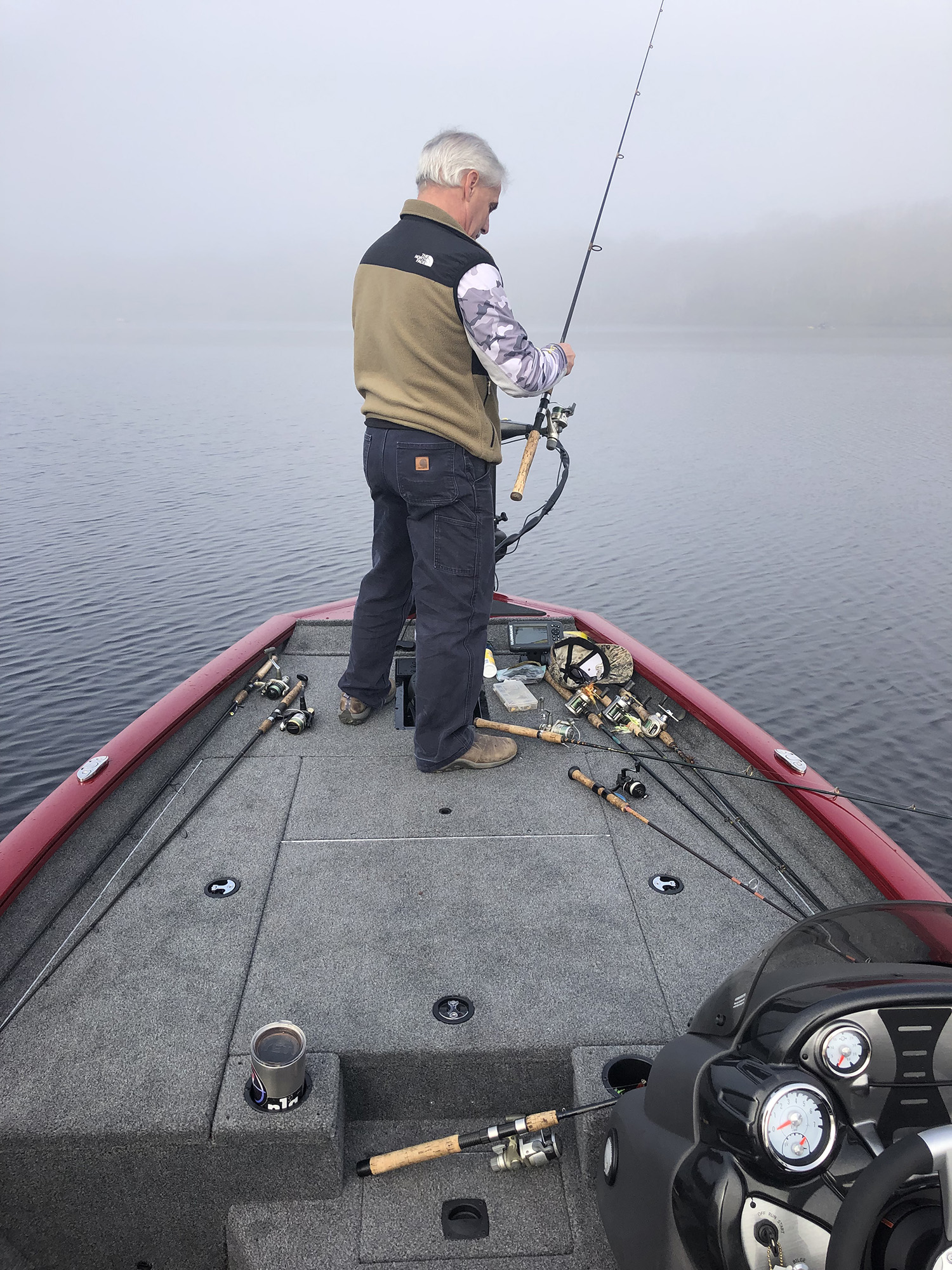 Bob getting it done on the bow in a fog

There’s a lot happening on a frigid February day so in the words of my friend Dan Ferguson, “Let’s get to it!” George Pomerovo brought his Seminar Series to Rhode Island College’s Roberts Hall and he packed in more than 200 eager fishermen and women. There was a lot...
Keep Reading

If you want to know what’s happening in the fishing world, you have to ask the right people. At Snug Harbor Marina, we brought together 6 young fishermen and fisherwomen to talk fish, tips, secret spots, favorite gear, stories and stretched stories. A few were right...
Keep Reading

Clover was Brude Leduc’s beloved black Labrador retriever. She hunted with Bruce through rain, snow and wind, ever poised to swim through icy waters or dive through heavy brush to bring back the birds. We remember Clover this week as she has left us far too quickly.