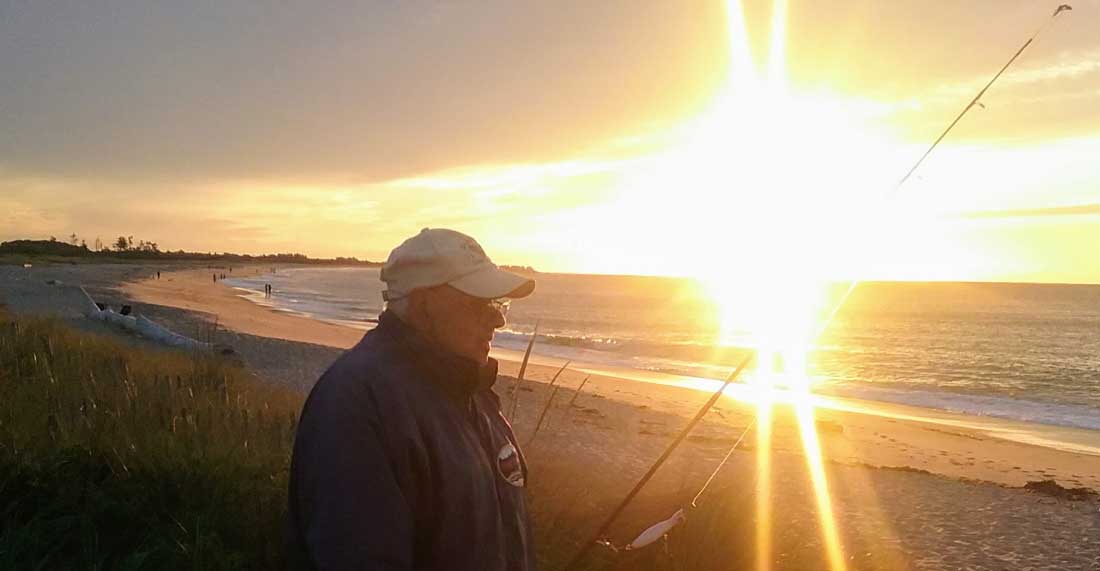 Fishing contests don’t make front page news in an age of scandals, accusations and reverse fake news. “Where you gonna run to when the world’s on fire?” asked Woodie Guthrie in his prophetic song, “Sowing on The Mountain.” While a country in turmoil reposes in front of big screens with talking heads working to sway us left or right, down on the beach, balanced on scattered rocks or walking long stretches of slippery small stones, a few friends went casting for striped bass, measured their private catches, then coached then safely back to the sea. No pictures or witnesses were necessary to prove anything, just a phone call or email. Such was the Nelson Valles 4-Member Challenge, an old school fishing contest anchored with honesty and honor and what’s more, named for someone who exemplifies both, a founding member of The Narragansett Surfcasters, known affectionately as Nellie.

Twenty-plus years ago, Nelson and Andy D’Angelo schemed to bring together good people who loved to fish and share stories but sadly, Andy, who owned Maridee Bait and Tackle, ran a charter boat and helped lots of people with the right gear for whatever fish they sought, passed before he could see its growth. Nelson persevered and in 2005, with Al Corrente, Dennis Rebelo, Dave Peterson and Alan Schmied, they each tossed in twenty bucks to create the Narragansett Surfcasters. Fast forward fifteen years and now there are ninety fishermen and women enjoying each other’s company throughout Rhode Island’s shoreline and salt ponds.  Joe added, “And he was very enthusiastic and energized by this. He was raring to go from the start.”

Club Treasurer Joe Coppola told me that the club’s “most sought after prize is the Andy Deangelo Trophy, which is awarded to a club member who catches and releases the longest striped bass for three consecutive years. A very high bar, indeed, but that is the way Andy would have wanted it.

So it was appropriate that when the NSC Board decided to revitalize its annual four man tournament this year, that it chose to recognize its “guiding light.” Second Vice President Dave Morton of Beavertail Rod and Reel fame was assigned to speak with Nelson about the honor and according to club President Glenn St. Germain, his reaction was “surprised and happy that we would have thought about him in the that way. That’s the kind of guy he is. Nelson is a for the people kind of guy. He really enjoys doing things for the kids, for the community, for the guys.”

So thirty people fished for ten days in seven teams of four, plus a few of course, on the honor system where all of Rhode Island from the shore was fair game for striped bass, bluefish and false albacore. Joe said, “The overall and false albacore winning team consisted of Mike Tilelli (RISAA 2018 Fisherman of the year), Tommy McGuire, Vic Cardoso and Michael Lynch.

The winning team for both striped bass and bluefish consisted of Dick Geldard, Rich Heffernan, Glenn St.Germain and Buzz Vickers. We really need more friends named Buzz. “We got some really nice caps and had our logo stitched on the side and the Nelson Valles Tournament on the front” Joe said. Those hats are more significant than a trophy or plaque as they will not be sold so members, “know they are part of the winning team,” Joe added. Awesome.

The Surfcasters have a mission of encouragement, preservation, good sportsmanship, positivity, courtesy, proper conduct and respect. You might not find that from the talking heads these days, but you will when you engage with the club and we have Nellie to thank for that. Surfcasters donate time and money to Earth Day cleanups, a Kids Fishing Day, taking disabled veterans fishing, purchasing gift cards for the Narragansett Housing Authority and South County Community Action and of course, supporting other club members.

On the chilliest of Saturday’s, they host Winter’s Greatest Day, their Surf Day New and Used Tackle Sale Surf Day, where tables sag with piles of used rods, reels, waders, plugs and all sorts of fishing related treasures. It’s a rare winter day when people agree to line up to buy used tackle but the Surfcasters have this day nailed. Scheduled for January 30, 2021, we’re hopeful the pendulum swings back out way and we can all get back to the business of haggling for new needlefish through mouthful’s of chowder and clam cakes.

“We’re always accepting applications,” Joe said about building their membership, because “when one door closes another one opens.” They’re looking for more motivated people to share a passion for salt water and community service. Interested? Sit down with Nellie some morning, after he’s fished an incoming tide. You’ll likely find him at Maridee Canvas-Bait & Tackle.

My time spent with the Surfcasters, whether at Pier Five, around meeting tables, while clearing out my yearly tackle budget within ten minutes at Surf Day or learning about another community project reminds me how philanthropy is the heartbeat of a bunch of guys who just love to go fishing at any time in any conditions. There’s no doubt this solid group of good people stays true to Nelson and Andy’s original vision.

At the contest’s end, the club pulled a name out of a hat to raffle off a Mojo Surf Rod. “You’re not going to believe this,” Joe said, “but this happened by chance, not by design. Nellie won the surf rod.”

Cheers to the Narragansett Surfcasters, respect to Andy D’Angelo and to Nelson Valles, thank you for so many years of fishing counsel, dedication to your community, encouragement to young fishermen and women and for building such a strong fishing club which remains a really welcomed positive in a crazy new world.

The Rhode Island Department of Environmental Management, Division of Law Enforcement (DLE) is seeking information about two recent incidents on Aquidneck Island of coyotes with illegal leg-hold traps. Anyone with information on who set these traps is asked to contact...
Keep Reading

A few weeks ago,  Mr. Dennis Tabella wrote a letter to likely every news source he could find to protest a turkey hunt for young people, supported by RIDEM and The Light Foundation.  While certainly I have empathy for all living animals and respect his group,...
Keep Reading