Who goes fishing? Who buys a license? Who pours over license data? Who spends the prettiest Saturday in months picking up trash? Who throws beer cans out car windows? So many questions this week.  Apparently, based on RI’s Saltwater Recreational Fishing License Report, the answer is a lot of us.

On a Zoom meeting with the RI Saltwater Anglers Association’s Legislative Board, DEM Fish & Wildlife Supervising Principal Biologist John Lake explained the 2020 Saltwater Recreational Fishing License Annual Report. There’s no finer way to receive data than from a numbers and fish guy who overpowers a laptop microphone, smiles his way through a spreadsheet then answers, slowly, patiently, every question while he’s pulling at his collar to tell us even more. Like Robin Williams extrapolating spreadsheets of harvest effort and budget projections, he’s always on and it’s always good. I could see him at a cocktail party sharing license statistics to mesmerized guests. 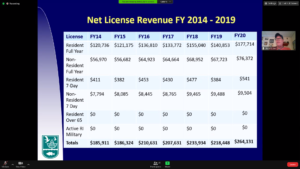 The Saltwater Recreational License Program produces hard numbers on fishing effort, license sales and how our dollars are spent. 37,664 resident full year licenses were sold, while 9,815 were sold to people from away. The latter is up from 8721 last year. 3,395 one week visitor licenses kept those yellow and orange license plates coming. Despite COVID, Ocean State striped bass and bluefish remain sirens calls for anglers. Saltwater license sales brought in $264,131 and of that, $177,714 was received from full year resident licenses. For perspective, in 2014, total license sales were $185,911.

“This is kind of like money in a piggy bank” Lake said, “There’s no pressure to spend it or lose it.” All funds are held in a restricted receipt account. Thank you RISAA. Deducting a few percentages for administration and we are left with monies dedicated to enhancing recreational fishing opportunities. The USFW Sportfish Restoration Fund also provides a three to one match, which means for every dollar RI generates, our federal tax dollars provide three more.

“It was a pretty normal year as far as expenditures,” Lake said. DEM is budgeting $25,000 for the Marine Recreational Information Program (MRIP), a state-regional-federal partnership that collects data about how often anglers fish and what they catch. In 2016, 42.8% of those interviewed responded, last year it was 51.7 %. That equates to 3403 successful interviews, 2147 refusals, which could also be that one angler in a group of four spoke for the rest, leaving three “refusals” while 1032 anglers were “missed,” likely from staffers seeing someone fishing down the beach they couldn’t contact. If anyone still feels apprehensive about interacting with an MRIP employee, data you share is incredibly critical to developing real time regulations which will pass the bar stool/arm chair quarterback test.

Shrugging his shoulders, Lake added that Narragansett’s Camp Cronin is sagging on his expense ledger as it continues to be abused by lazy and entitled visitors, callously jettisoning their single use I’m so lazy plastic four milks five sugars iced latte in plastic cups, doubled up to keep things chilly of course, who also ignore basic parking rules. A beached city girl broiling below a noonday sun, a surly guy still driving a T-Top, a family from away feeling the sting of pay to park beaches, a local burned by the collective former; all these characters are overloading park workers and budgets with trash and their privileged ignorance. The obvious reaction will be more state workers, more money wasted on waste collection and, in a strange positive, more parking tickets.

“Call me up on the phone, I’d be happy to talk with you,” John Lake said, with that big and true smile. He means it. If you need to be reminded of what passion and knowledge sounds like, John is your man and he seems to be bursting at the seams to tell us more. Contact John Lake at john.lake@dem.ri.gov.

To celebrate a bluebird Earth Day, twenty volunteers from RI’s Trout Unlimited chapter, nineteen of whom would probably rather have been fishing, spent hours picking up trash along Exeter’s Route 165. That was after ten minutes helping each other into twisted up orange Velcro vests. In teams of two, volunteers plucked plastic, tugged tires and collected cans. Apparently, many of us visit woods, secluded, protected, peaceful, whistling with spring breezes, then hurl Bud Light cans, cigarette boxes and personal hygiene products out a window. An unintended consequence is potential recyclables get crammed into black plastic bags, regulated to ordinary garbage.

In the Pines section of Arcadia, Steve and Brandon found endless streams of cans, bottles, condoms and tires. And a thirty pound truck muffler buried in briars. Someone rocketed a plastic bag full of empties right to the edge of some bursting skunk cabbage, which did make it easier to remove without scratching both forearms but why not just take it home? Why throw it into a wetland? Kids? Adults? Fly fishermen with a taste for lousy beer? Maybe there’s power in abusing such pretty lands. 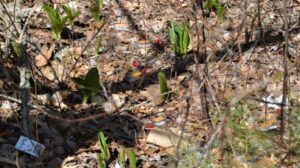 And a Burger King soda cup. The two closest BK locations are 22 and 23 miles away, which means someone was dedicated enough to drive all that way, take a winding dirt road into the woods then toss it, because using a trash can was just too much to ask. Were they going fishing, hiking, sneaking off to use up that now empty box of Trojans Steve found? Recycling won’t fix all our problems but the landfill in Johnston has reached its maximum height.

Piling up more garbage will require lights to alert aircraft. Let that sink in for a moment or three before tossing your beer can or Blueberry vodka nip or demand a second plastic cup for your iced latte. It’s a big and beautiful world and we’re lucky to fish it.

Ramping up, lighting up and meeting Aaron Flynn

Smackin’ it with poppers, Brian Hall and a kayak

There are big fish all around us. Up North, where Narragansett Bay becomes the Providence River, menhaden are filling coves and the bass know it. The best tip right now is to liveline a few snagged pogies and work the schools. It can be a crowded place, especially...
Keep Reading

In 2015, a few kayak fishermen started a Facebook group to stay in contact, make plans to go fishing and encourage others to get on the water. Word spread, membership increased, anglers entered and won tournaments, the page became popular. Fast forward eighteen...
Keep Reading