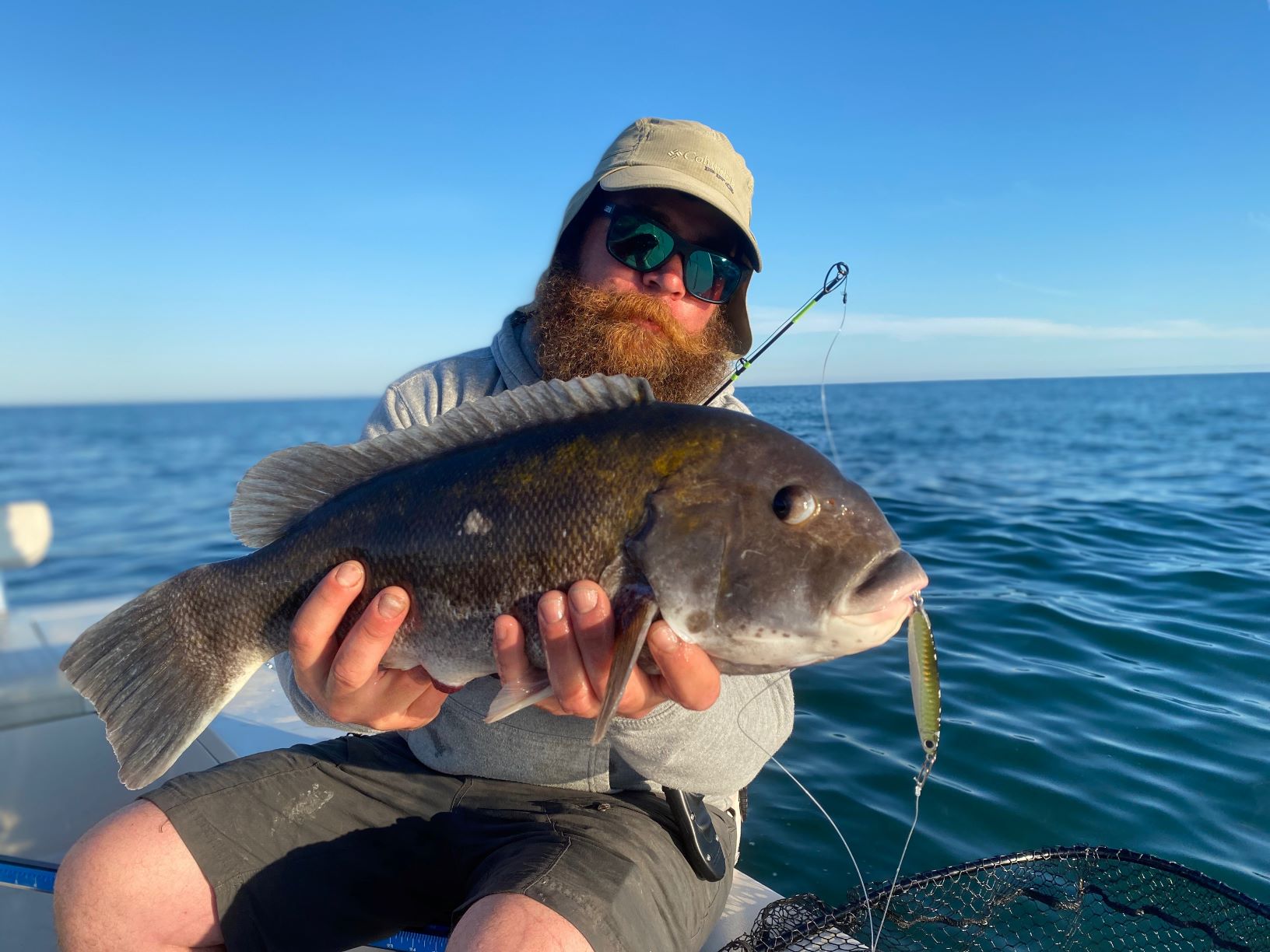 Clearly it’s time to cast and blast in RI now with stripers and fluke on the beach, carpenter bees chewing their way through house trim, tautog spawning and fair weather dominating those shaky at best ten day forecasts. Get out the scissors, clear some room off the refrigerator door, it’s Fish Wrap calendar time.

First we cast then we blast

At the helm of the pretty Miss Collen, Greg Vespe has fine-tuned his Humminbird electronics and Minn Kota Spotlock motor to position himself over piles, and we mean piles, of tautog. Blackfish are feeding their way through spawning sessions, feasting on a buffet of fresh green crabs as they ensure another generation. 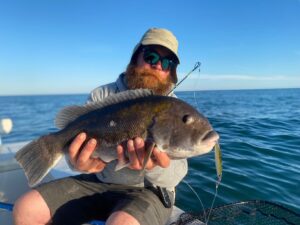 The Ocean State is blessed to have such a robust black fish population, largely due to highliners like Vespe, Robbie Taylor of Newport Sportfishing Charters and BJ Silvia of Flippin’ Out Charters practicing what they preach by safely releasing those big females. That season opens again on August first.

Squid fishing has been slow, despite a flotilla of bright lights bobbing under bridges, picking their way through a few big ones picking away at juvenile sand eels and the occasional pretty elver, suffocating the air with cigarette smoke. They’ll come back stronger in the fall and stripers will follow. 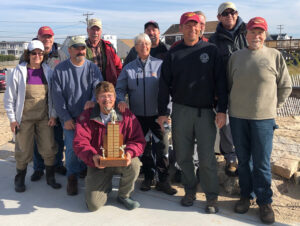 The RI Saltwater Anglers Association is hosting their 18th Annual Spring Surf Fishing Club Challenge on Friday, June 18. This is a big weekend in any normal year but given how 2020 went over, when we had to forgo things as simple as having breakfast in waders and smelly hooded sweatshirts after fishing all night with our friends, if you’re a member of a fishing club, you need to rally your troops.

In keeping with RISAA’s mission of philanthropy, the Challenge is a benefit for the Amos House in Providence. When everyone staggers in from the beach, there are no silly red carpet or photo moments, save for groups shots with awards and some passing of blurry late-night images of hard earned bass. There are no weighty speeches; everyone is far too focused on inhaling as many carbs as humanly possible while leaving room for Sysco coffee that somehow tastes so much better by the third cup. There is, however, a team trophy for the largest combined weight of striped bass and bluefish and the Charles Bradbury plaque for the largest striped bass. This weekend of fun is all business by the end when someone gets to hoist that trophy.

Dust off the surf rods, walk a beach for striped bass

We need this. Last year, when we needed the peace and solitude surfcasting affords us, we saw parking lots closed for a pandemic. There will be plenty of pent up demand for two long nights swinging surf rods, switching out lures to find what’s right, heckling other members about who’s catching what, walking east with a rising sun, lining up for that first cup of coffee, sitting and searching for one annoying pinhole leading to one soaked wool sock, watching a stack of pancakes and bacon get loaded onto doubled paper plates and being able, finally, to tell that first big fish story over what just may be the best breakfast in a year.

The event runs from Friday night until 7:00 am on Sunday and is open to all Rhode Island waters, including Block Island. All state regulations apply. Contact RISAA Surfcasters Committee Chairman Ron Barnes at surfcasters@risaa.org.

When your arm has recovered from swinging that Ron Arra Surf Pro, The Peace Dale Shooting Preserve is hosting its Second Annual Burhoe/Lepage Foundation Sporting Clay Shoot on Saturday June 5. The day starts at 10:00 am with a $100 individual or $375 team of four entry fee, which is pretty short money since that includes a 100 round shoot, ammunition (have you seen the price of target loads lately? This entry fee is a no brainer…), shotgun rental if necessary, golf cart rental, an entry for an ATA Arms SP Sporter Over/Under shotgun raffle and lunch and a cigar. You can’t have a good day on the course without lunch. The cigar is a pure bonus and another good reason to celebrate being out with friends doing what we love.

There will be only 50 raffle tickets sold for a Sporter 12 gauge which has a retail value of a thousand dollars so don’t miss out on a decent chance to win a decent firearm.

A few years ago, Fish Wrap covered a fire department benefit with the musing that with all the money floating around and the size of town budgets, it just seemed crazy that firemen had to have charity events to keep their stations floating. Apparently, a few years later, not much has changed so it’s our job is to help the cause. Besides, it’s fun and you just might win a new shotgun.

All monies go to the Kingston Volunteer Fire Company. The Peace Dale Preserve is at 371 Rose Hill Road in South Kingstown, which really is only about thirty minutes south of the capital city, so it’s not that far away, even by Rhode Island standards. To register, email burhoelpage@gmail.com.

We’ve earned all this play time. Now it’s time to cast & blast in RI before summer crowds arrive and while parking lots will fill quickly, at least they’ll be open this year.