Under a blazing sun, two people stood, contemplating their trailers fate as it lay heeled over, suffering from a broken axle, on a bustling South County road. Returning from a good day fishing around Connecticut’s Barn Island, a seasoned fishing guide was alerted by a passing driver that his trailer bearings were engulfed in flames. Launching a fishing kayak for the 38th time this summer, a fishermen went for an unexpected swim as his gear sank to the bottom. By August, we have been fishing, paddling and boating steadily and we can establish routines while forgetting others. It’s a fine time to focus on some mid-season maintenance, especially for trailers and we know a little something about trailers, here at Fish Wrap… 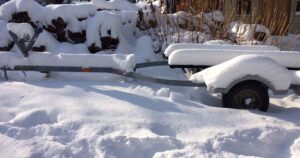 Those who trailer boats of any size rely on a few basic parts to cradle their prizes. According to BoatUS, the number one call, at 44%, was for roadside assistance due to tire problems like low pressure, which often results in tire failure. In many cases, people neglect to pack a spare. Storing a tire, jack with handle and properly sized sockets to remove lug nuts should always be part of the trip plan, even if we’re just heading to a local pond. Having a set of stand up reflectors will help keep you safe as you make the switch.

BoatUS also reported, “Wheel bearings were the second largest (21%) cause of roadside assistance requests. Boaters should additionally be aware that the number three reason to request roadside BoatUS Trailer Assist service was
trailer axle issues (11%), followed by trailer failure (6%) and tow vehicle failure (5%).” So that’s two thirds of all calls being just for tires and bearings. Bearings should be repacked, or at least inspected, every year. If you don’t put lots of miles on your trailer, having a grease gun and appropriate marine grade grease, like Star bright or Lucas brands, will keep you running for years.

If you travel more, bearings are fairly easy to replace in the driveway, you know there’s a You Tube video for that, or should be brought to a shop to have them done by professionals. BoatUS created a brief video with a safety checklist, which you can watch at on their website, or right here.

Maintenance Routines Are Key This Month

This week, kayakers should check the batteries in headlamps, flag lights and flashlights. Put a dab of dialectic grease on cables to keep water out and connections clean. You can find that at any auto parts store, often in a small package on the counter for just a few dollars. Double check your PFD straps and zippers. A loose PFD will not work properly if something goes sideways, no matter what kind of boat you have. Sharpen your vest knife, replace rusting hooks, make sure your license is tucked in a pocket, replace that squished protein bar with a fresh one.

When you haul out your kayak, have a look at the bottom for stress cracks, inspect scuppers for hairline cracks. Today’s kayaks are rock solid but things do change in salt water and in the glare of sunshine. Look at tether cords for signs of breaks or wear. Having everything in a kayak or small boat secured is very cheap insurance.

For boaters enjoying daily whale breaches east of the island, it’s time to check batteries for proper charge and connections for corrosion. Oils might need to be changed, which is far less fun than chasing stripers but clean oil is an engine’s cheapest insurance. If you haven’t used your boat as much as you hoped, it might help to replace old gasoline to avoid poor performance. You can recycle gasoline at the RI Resource Recovery Center in Johnston through their Eco-Depot Program.

The Rhode Island landfill. There is no “away”

Call 942-1430, extension 241 or use their website to book a free appointment. There are also several companies which accept old fuels, which you can find on the same website, http://atoz.rirrc.org/items/gasoline.

Into the salt we go

“I like to launch from the sand but I’ll set in here to keep things moving,” one kayaker said to the next in line. With a flotilla of anxious but courteous kayak fishermen waiting on a dark and slick boat ramp, he carefully stepped along inky green concrete strips at the water’s edge. “Can I give you a hand, do you want a push?” said the next person waiting. Waters were calm with only the occasional small swell. “I just like to make sure my coffee is safe,” the first person said with a laugh as he climbed into his low sided kayak, accepting a push into the salt. In an instant, an awkward entry into a low-sided twelve foot kayak, the boat turned turtle, the angler went under and a load of gear went to the bottom or moved out with a receding wave. 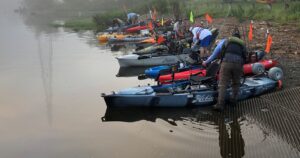 Everyone scrambled to help, grabbing floating SP Minnows and bright yellow bluefish poppers. The unfortunate kayaker managed to find his truck keys on the bottom, which seemed like a small miracle, several metal spoons and lastly his upside down Yeti coffee cup, its precious hot caffeine cargo replaced with 72° seawater. A few basic tenants of safety were overlooked because he was out of his routine.

Back at the ramp several hours later, two other kayakers landed a few minutes behind him. “Is this yours?” one asked, holding a tooth marked Mike Yarworth Original bluefish popper with new single hooks. Somehow, it had remained in the wash all morning without impaling a swimmer and was returned, thanks to the honesty of a fellow fisherman. This month, it’s time to double check everything, even routines and keep tackle boxes latched until it’s time for a new lure, then we can reach for that coffee. 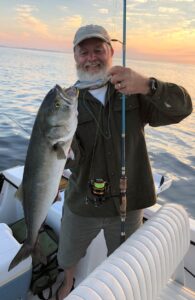 Josh Miller knows fish, he hunts, he dreams of packing up a trailer and hauling himself back to Alaska, back to where everything is big and wide and open, where people live off the land and there are options for a smart guy. He also knows how to catch fish. Big ones.

A look at Block Island, not Block!

Over on Block Island, the fishing seems to be mirroring the mainland action: good but not great. With the exceptional exceptions of a few big bass being taken in the Narragansett area, shore fishing seems a bit slow. Again. Didn’t we just go through this last year?...
Keep Reading

One way to get a fisherman thinking is to make him wait. You get that time at a two lane boat ramp when a freshly detailed crossover with a yellow plate is parked in the middle of both, while the driver provides a lesson in roof rack ratchet straps to the...
Keep Reading

Allen Hall has passed away, a true Block Island fishermen right to the last