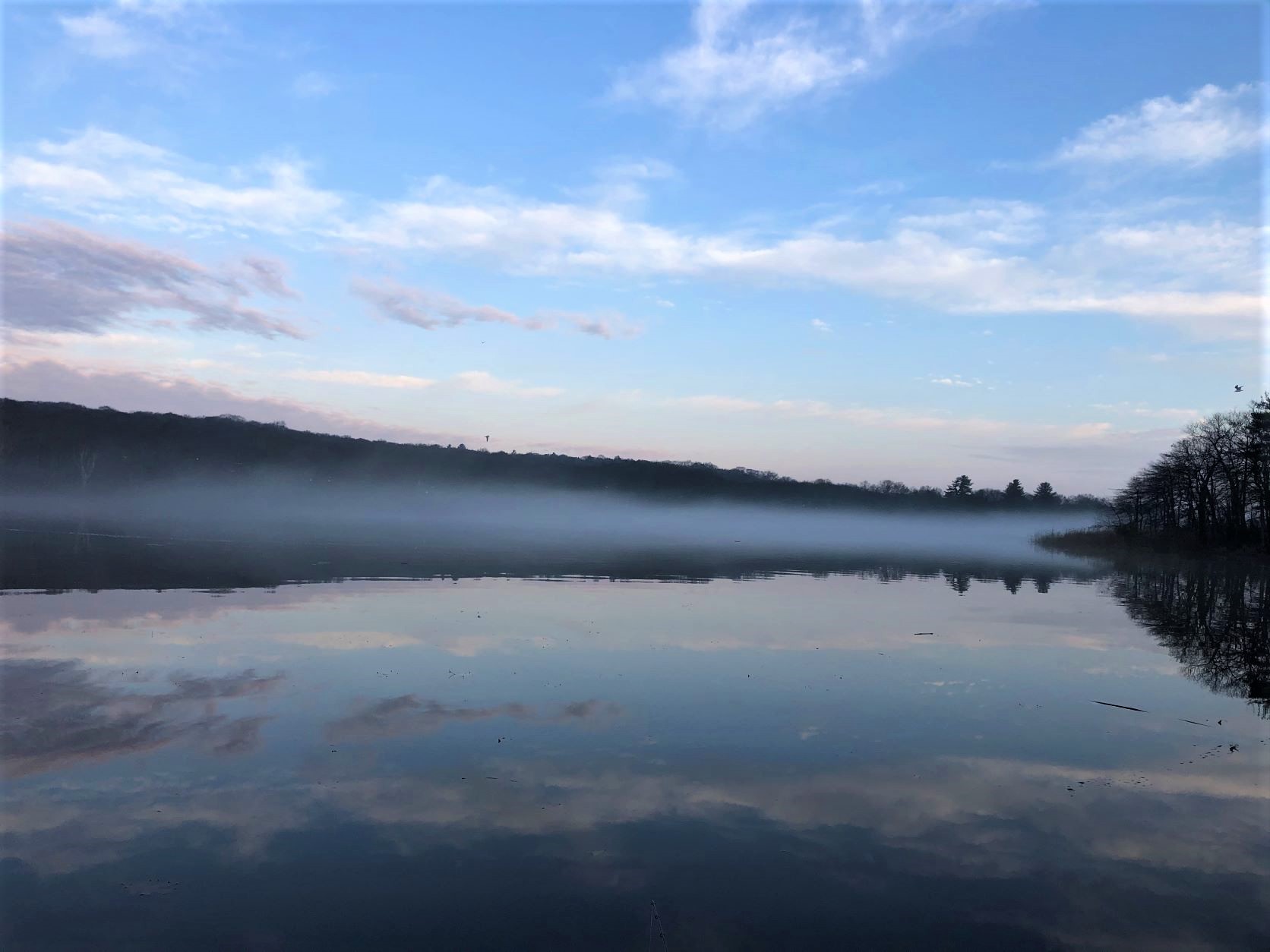 That fish glides by me as I sleep. She is grey, dark blue, brindle even, perfect in her seven stripes. From darkness, she rises sluggishly, worn from battle, pulled by braid alongside my bed’s port side. Seeing a green bunker spoon in her open mouth, her black eyes like stones, I reach but then she is gone. Each night she rises again. There is no sound. She sinks like Penobscot River timber, slowly, as a parted leader recoils to lay limp on my lap. She vanishes. Cold waters calm. My small boat slowly spins away with shallow currents. I sit up sweating, mumbling swears at the ceiling as my slumbering dog unrolls to go anywhere else. She was a titanic winter bass. She was the one who got away. Some will say we have all been there. That doesn’t help at all. 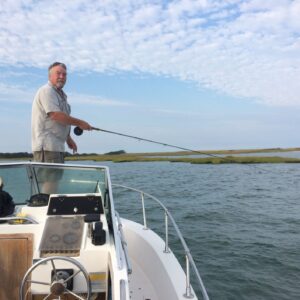 John Fallow, aka Johnny Duxbury, said, “I hooked a fish on the fly one April morning from shore, inside Duxbury Harbor. It took me to my backing. Then I gained a lot of line back. Then she stopped and I could not move her, still 50 feet away. Held tight for several minutes then felt one huge head shake and the line went slack. Never saw the fish but in my mind, it was a trophy fish for sure. One of those times that you walk away feeling a little ill.” 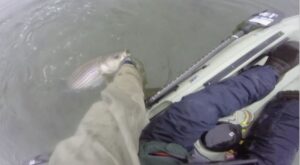 slightly smaller, without any separation anxiety

It was barely New Year’s day. I was alone in a cold rain, absorbing those quiet moments before a charcoal sunrise. A strong new moon flood tide summonsed fish to hunt shallow waters where frightened mummichogs danced. She was huge. Those South County fishing machines, the Simpson brothers, would have said, “She was yuge.” They also would have landed it. I don’t need some circle of metal chairs and supportive anglers consoling me with their similar stories or to tell me I can move on. What I need, and she has become a need not a want, is that fish.

Master Maine Guide Justin Morse remembers a cold stream and the one who got away, likely off The Golden Road near Katahdin. “I lost it so long ago I don’t know how big. Biggest ones always get away. Probably a chub that I told myself was a huge brookie.” His touch of self-deprecation doesn’t erase images of rods bent to breaking points or striped bass pulling skiffs in circles. She was so close. A fish likely three feet long, or more, in January, in three feet of 40° seawater, vanished. She haunts me.

Jason Anctil, a devoted sportsman who possesses great observation powers about life’s most important moments, said, “As a fisherman, every bite that gets away is a heartbreaker. I have at the very least, three giant largemouth that I saw and for some reason, came unbuttoned. I had a cobia off Newport two years ago that well, never made it to the boat.  I also had at least two monster fluke that were half way up and somehow shook off. I try very hard not to focus on lost fish, they make me sick. It’s so much better to think about the fish I have landed. Honestly, if we caught every bite, we would not call it fishing. The big fish that do get away are learning experiences. When a fish gets away, it’s always the anglers fault and good fishermen learn from these lessons.”

Swirling slowly in some endless eddy, wrapped in a hue of chalky woodstove smoke, rain lightly tapped a smooth surface as my string of inconsiderate profanities lanced a morning with anger, echoing through a peaceful Narragansett. I closed my eyes but she was there still. 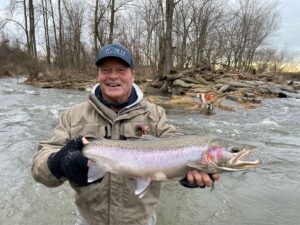 Mike Kinney is a guy who wakes up dreaming of fishing and who knows heartbreak. “I broke a really good fish off on Johnny (Duxbury) at the boat and Johnny lost Fluke-zilla, who took his rod and reel. The memories are blurry. I try not to sweat that stuff and they are really lost if you hook them and see them.”

Rod, reel, fish: all gone. Finally, decades of taking notes and watching water gelled for me and now she too was gone.

Always the gentleman conservationist, RI Trout Unlimited President Glenn Place recalled, “It probably was on the salt. Fishing the worm hatch on Ninigret Pond. But in reality, any time a brook trout breaks off, it refuses my opportunity to truly appreciate how beautiful they are.” Glenn never ceases to impress. 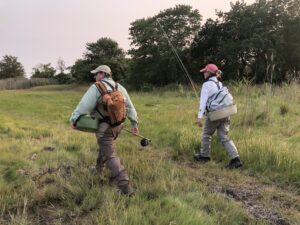 Glenn Place and Susan Estabrook, out to find more fish

Drifting into a thorny brown shoreline where a red cardinal oversaw my plight without interest, tears welled in my eyes. Cold glove fingertips, rough from salted slime and sharp scales, gripped my temples. My head laid low in my hands. A stretched twenty pound leader lay on my soaking wet lap. My hands were shaking. 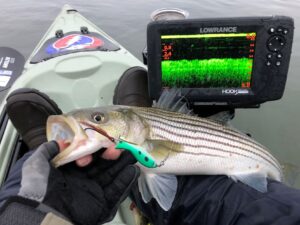 A close cousin of the one who got away

Zach Valliere has been right there, leaning over a gunwale. He said. “Big cobia, down south with my Dad. Had it to the leader, then snap!” 14 words make a memory he won’t shake. Steve Babcock leaned over as well, for a much larger fish. “About an 800 pound tuna, right along-side the boat. The leader broke.” “To the leader”, “The leader broke”, “A stretched twenty pound leader…” Agony.

Jason Anctil has it right. “To go into detail on a lost fish is really only a fish story because it is truly the one that got away.”

But this one did get away and I won’t get over it. Ever.