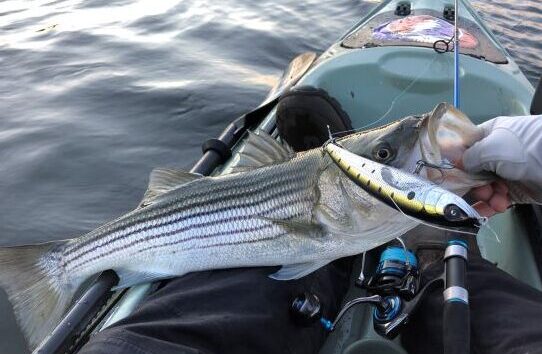 ASGA Delivers Amendment 7 For Striped Bass. What does that mean? Well, Peter Jenkins has something to say about striped bass, Amendment 7 and the Atlantic States Marine Fisheries Commission, which oversees stripers and 26 other marine populations. If you fish for stripers, lament you can’t catch one (sorry Colby Whaley) or have endless stories about catching and releasing, then you understand how much stripers mean to the folks and economy of New England. Peter owns The Saltwater Edge tackle shop in Middletown and is Board Chair for the American Saltwater Guides Association. The Guides Association has worked fluidly and steadily, advocating for real changes to the management of striped bass populations. When Peter Jenkins has something to say, we listen.

This year, anglers had an opportunity to be heard because when the ASMFC called for comments, after years of pressure to correct a reactive response to fishery dynamics and blatant violations of quotas and damned fool allowance of conservation equivalency, the ASGA took the tiger by the tail. It worked.

The American Saltwater Guides Association took the tiger by the tail

From their May 6, 2022 press release, “The ASMFC approved Amendment 7 to the Interstate Fishery Management Plan for Atlantic Striped Bass. The Amendment establishes new requirements for the following components of the FMP: management triggers, conservation equivalency, measures to address recreational release mortality, and the stock rebuilding plan. The last striped bass stock assessment found the stock was overfished and that overfishing was occurring.”

800 letters were received by the ASMFC regarding Amendment 7. “600 or so came from the Guides Association. And three years ago, we didn’t exist. Now we stuffed them in their locker and took their lunch money,” Peter said proudly. Regulators don’t often bend to public pressure as the politics of fishing makes progress cumbersome and tiring but this is a win for sure. “On a scale of one to ten,” Peter said, “It’s in the eights. An eight plus, eight and half.” 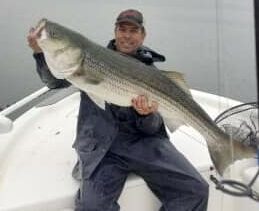 One of the main issues the ASGA advocated for was the removal of conservation equivalency. CE is a way for states to manipulate their quotas by moving a ball under a cup. It’s where one state can meet the mandates of increasing a spawning stock biomass or mortality reductions by means other than recommended by the government, which is required to listen to scientists and people on the water. In reality, they’re more prestidigitation and delay tactics than effective alternatives. they are a way to dodge negotiated regulations by altering state rules, historically without repercussions. “Conservation equivalency is how Maryland overfished by 217%, with that loophole, without consequence,” Peter said. The ASGA is opposed to conservation equivalency for species which are overfished or are experiencing overfishing.  “What they did (with Amendment 7) was put some guardrails on conservation equivalency, one being, you can’t use CE on stocks that are overfished. That’s huge. That’s the win.” 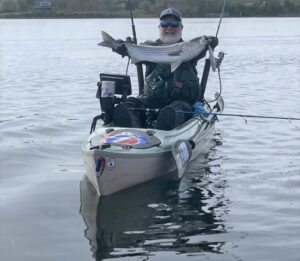 Fooled with a Shimano Splashwalk, a newly arrived striper gets released

For perspective, Chesapeake Bay is the chief spawning ground for 70-90% of striped bass from North Carolina to Maine. Currently, Maryland allows for the harvest of 19” bass from May 16 through July 15 and despite volumes of evidence of overfishing, they have a trophy class harvest this year. What’s a trophy? A mature, fecund female, precisely the fish you want to keep in the water. What the ASGA wants, is for regulators to be proactive, to pay attention to data and fishermen, even those without connections. They know fish are worth more in ocean than in a cooler. In Rhode Island, recreational fishing brings in approximately $419 million per year.

The ASGA is creating a membership dynamic in real time. They don’t really have a membership at all. They don’t have banquets or mailings offering free stuff. They want participants in the process year round and not surprised when there is a call to action. So, to be heard, the leadership team went on the road, engaging everyone who would listen, helping them be active participants, to be part of the solution. Even if people never wrote a letter, they still left better education about fish and regulators.

“I think we’re going to rewrite what it means to be a participating member of a conservation organization. 70% of the people who came to a Road Show were new to the Guides Association. In various spots along the way, it’s time to write a letter and we’ve been teaching people how to advocate,” Peter said. “I would be very confident that we touched 30,000 people in NY, New England, NJ on striped bass. Very confident.” 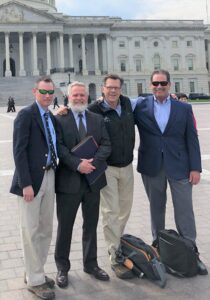 So with this momentum, what’s next for the ASGA? “We’ve arranged for a tagging study for false albacore. That’s an important game fish, we’re finalizing a strategic plan.

And for dealing with the ASMFC?  “Our attitude is now, one species down, 26 to go. I think they suck twenty-seven different ways to Sunday.”

As of 2021, the species ASMFC is charged with protecting:

After 800 letters, we hope the ASMFC is listening now. 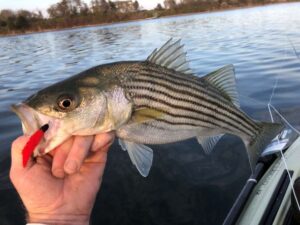 Leases in a Pond & a Sale to Welcome Spring

If you want some fair chance at success in early light, high sun or lazy twilight, LIVE TARGET Pumpkinseed target lures may be just what you need to close the deal. They are life-like, have some serious wiggle and the perfect balance of paint and shadow to entice even the most wary bass, pickerel, walleye or Northern pike to attack.