ICAST 2022 in Orlando, Florida introduced a host of new and clever outdoors fishing products along with a few absolute standouts. The International Convention of Allied Sportfishing Trades showcased several fishing powerhouses proving they are constantly creating and rethinking lures and gear while one small company absolutely stole the show for design and resilience. Winning a Best Of award is a major industry accomplishment and we are happy to highlight two of the biggest winners, ICAST’s BacPak & LIVE SHRIMP

Winning Best of Show is a Huge Honor

More than 900 new products were entered in 30 categories so competition is brutal, even in a largely friendly environment. Imagine being a small company registering for a booth just three weeks before doors opened, then setting up posters in the shadows of glittering Penn, Daiwa, Pure Fishing, Grundens and Yeti electronic displays. That was PacBak, a small company founded by Brian MacKinnon. An experienced fishermen who spent years in Alaska, he understood the value of fresh salmon and difficulties of keeping food cold. His P88-MK Combo cooler had been in critical design and testing phases for several years when Brian and close friend Adrian took a break in 2017 to relax at a Los Vegas country music festival. That day, 400 people were shot and 58 killed, including Adrian. Such emotional trauma sent his into a downward spiral. It took time to get his life and business plan back on track. Standing at his booth, holding a coveted Best of Category award, his life came full circle. The P88-MK Combo won the Soft and Hard Coolers category then, to his surprise and an auditorium’s cheers, was awarded the overall 2022 Best of Show Winner. 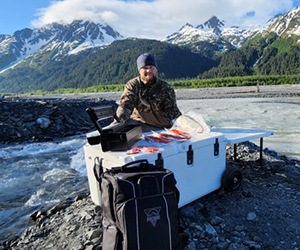 BacPak shines in the deep woods

The P88-MK is 88 quarts of hot and cold storage in a mobile kitchen. It’s pure genius, born from a love of outdoors and a need to be smart and efficient off the main road. The top folds back to be supported by two legs, holds a workspace, cutting board and battery powered vacuum sealer to preserve your catch quickly. Divided insulated storage accommodates hot and cold items and it’s rugged enough to have been field tested by a 1250 pound Alaskan Kodiak brown bear tossing the bejeesus out of one.

PacBak was a Kickstarter fueled dream and now is surely awash in orders. Cheers to Brian MacKinnon and his company for never giving up. 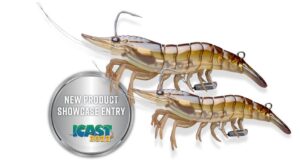 Another Best of winner, this time for Saltwater Hard Lure, is LIVE TARGET’s new LIVE SHRIMP. At ICAST 2018, LIVE TARGET’S Fleeing Shrimp was a winner and they seriously have upped their game. We have been impressed by their Slow Roll Shiners and Twitch Minnows because of lifelike designs and supple but sturdy plastic compositions.

Coming soon to retailers, this new LIVE SHRIMP is smart, with an interchangeable weight system which allows you to match movements of a shrimp caught in the open, falling to the floor and scurrying for some sandy security. Successful anglers understand many predatory fish will key in on injured prey, culling out weak or nervous  so casting a LIVE SHRIMP with one or both weights lets you tweak the fall and run. The shrimp body is tough ABS, legs are TPE which is flexible, like rubber. That means legs will flutter on the way down and wiggle when moving horizontally. It’s not often we get to use the word wiggle when talking tackle. The off centered balance presents a frantic shrimp swimming for its life and that hard and soft match is absolutely necessary to fooling wise, large fish. This winning design is flawless. 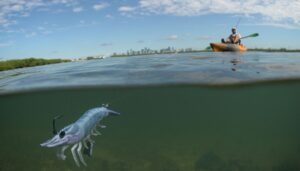 ICAST’s BacPak & LIVE SHRIMP from LIVE TARGET will be in high demand. LIVE TARGET leads a global tackle industry with extraordinary anatomical imitations that naturally translate to honest movements so LIVE SHRIMP are available in eight high science colors, which they designed as biomimetic, meaning they use synthetic materials to emulate elements of our natural world processes. High science indeed. It’s completed with a razor sharp Mustad Ultra Point hook, rattling beads for that classic clicking sound that target lateral lines and that look on your face that asks, “How did they do this?” LIVE SHRIMP will catch fish and the P88-MK Combo will wrap it and chill them. ICAST’s BacPak & LIVE SHRIMP will make for the Best of Summer Combo ever.