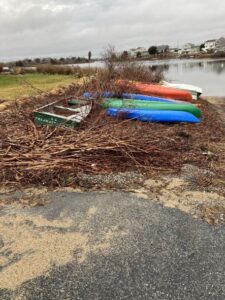 Because you can doesn’t mean you should

Fisheries laws, like most rules governing our movements and actions, are often reactions to excess or poor judgment. When we take fifteen bluefish, knowing one or two are enough to feed the kids and smell up a kitchen, bag limits are imposed. When we drive too quickly, speed limits are posted. When we park in front of hydrants, we get an expensive orange reminder of our bad decision. When we throw plastic nips out car windows, nips get banned. Hopefully. Shoreline access for walking a beach, casting a rod or trying to prevent a private business from leasing acreage away from historical users are issues finally being explored at a state level and focus is clearly on ways access is impeded because of excess or poor judgment. Boats blocking public access to water is an increasingly annoying yet easily fixed part of the equation.

Access is impeded not just the wealthy stringing clotheslines across “their” sand or some slightly clever folks parking vehicles or rusty rider mowers across pond paths, it’s also people leaving their boats at points of access. Bob Mallard of the Native Fish Coalition recently wrote a fine piece in a Maine sporting magazine entitled “Stashed Boat Etiquette” which parallels our own access issues caused by boats.

Boats blocking public access has been tolerated for years. Locals drag their skiffs/kayaks/prams/inflatables/Beer Can Regatta rejects to the water’s edge then expect the rest of town to step over them for months. In some cases, they stay in the right of way long after the owner had their Mercedes shipped back to the Sunshine State. Most access points are regulated by the Coastal Resources Management Council, which has its collective hands full now just trying to collect enough hands to raise at a meeting. No town official or neighbor really wants to wade into a confrontation or create a sea of new regulations for seasonal people who expect a lot for their taxes but then, as humans are apt to do, we get greedy as common sense gets squeezed like common land. More people bring more boats and consume more space. Scientists call this a positive feedback loop. Then one day, a recreational angler tries to back down and unload a kayak and ends up with a plastic paddleboard jammed up his wheel well. You can imagine how that’s not terribly charming at 4:15 am when there’s barely room to get out that truck because of all the boats. This was after many weeks of tossing pointy plastic heaps back into a knotweed forest which the town can no longer maintain because of such de facto boat storage. You can see the circular conundrum here, but like a water ban people read about in the paper with a hose in their hands, few will heed calls to take their boats home. 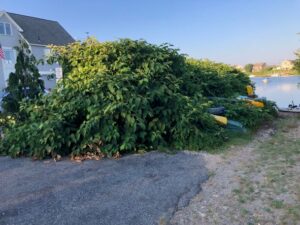 How is this fair to other users or the Town who tries to maintain access?

Many points of coastal access do not allow for storage of boats or anything else. The prohibition of boats blocking public access has been codified in town and state ordinance. According to RI law § 11-44-24, Blocking or obstructing public rights-of-way to water, “Every person who shall obstruct or block or cause any obstruction of any public rights-of-way to water areas of the state shall be imprisoned not exceeding one year or be fined not exceeding five hundred dollars ($500).”  CRMC’S Right of Way Designation Process states, “The CRMC prohibits any activities that would obstruct the public’s use of the site and pursues legal actions against individuals that block or impede public access at designated ROWs.” 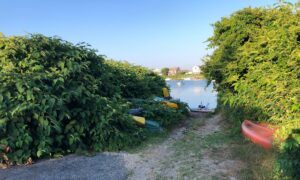 One access point in South County is 50’ wide yet has been reduced to barely seven feet because of boat storage. There is so little room left that boats are now tied to shrubbery and left floating so if you actually are able to get your craft to the water, you have to navigate around sun-bleached wrecks wedged like pie pieces. There is hesitancy to use the word “fair” when asking for consideration as it tends to sound whiny but it’s not fair to block a right of way because you don’t feel like taking your boat home.

So where will this go? Well, I suspect most will pack a lunch, winch their dingy from the knotweed, grill and ignore the call. If they read this in the paper, they might light the grill with it.

When we abuse we often later lose

Someone I easily forgot once said, “If nothing changes then nothing changes.” Facts. A few will agree and say, “What a shame,” using our access points respectfully. A very few will ask their neighbor to take their vessel home so others can use the site, like the folks who use these waters year round. And one, maybe just one person, will write a letter saying enough is enough. And that’s how laws get promulgated. So the ask is to take your toys home when you’re done, leave access sites open for the public who wishes to use public trust waters and most importantly, if you haven’t already slammed the laptop shut, share it with a neighbor who won the regatta. 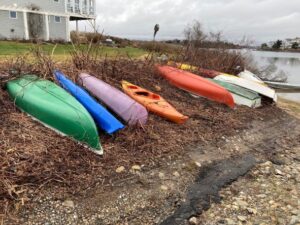 Todd Corayer is a lifelong fisherman and occasional hunter surrounded by outdoorsmen and women whose stories and passions help his words fit together like puzzle pieces. Read more New England fishing reports, stories, regulatory updates and introductions at www.fishwrapwriter.com

It’s time to get tight with Spring fish because just like that, we are surrounded by stripers, squid, tautog and all the while, largemouth bass are making their beds while the smallie bite just better. Tune into our weekly Fish Wrap Fishing Report each Friday on Spotify and wherever you get your podcasts.

One last shot of ice for the year

Southern ponds had largely thawed. Only Maine and points north still had solid ponds. Spring be damned, we needed one more day on the ice, so we got the band back together, sort of. We assembled nine die-hards: three sharpies from Connecticut, the two owners of Al’s...
Keep Reading

This week, kids rule the seas

Many of us try our level best to teach our kids how important it is to get outside, breathe some fresh air and if we can get them on the water, to catch some fish. Sometimes we teach them our skills and experience such pride when they shine. Sometimes we get to take a...
Keep Reading